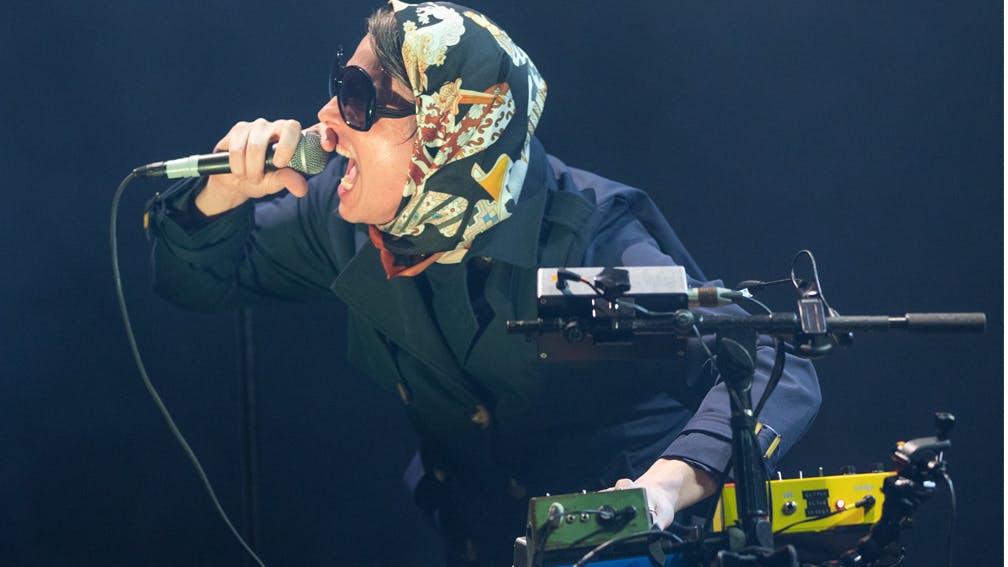 Chicago’s Douglas Park is awash with hysteria this evening. Some wondered whether the My Chemical Romance comeback might start to lose steam after a few months on the road, but the scenes on the first night of 2022’s Riot Fest suggest it’s actually picking up momentum. Legions of fans plastered in MCR and ‘Elder Emo’ merch have been baking in the sun since the early-doors live debut of guitarist Frank Iero’s new band L.S. Dunes. A killer undercard featuring everyone from carolesdaughter to Bob Vylan culminates with MCR’s goth-punk forefathers Alkaline Trio and their New Jersey brethren Bleachers. But nothing compares to the gargantuan crowd that descends on the Riot Stage shortly after sundown.

Onstage, they’re using the same ‘charred cityscape’ backdrop they have been all year. More attention-grabbing is Gerard Way’s ensemble. Adding to the cast of characters we’ve seen the frontman inhabit recently, he comes on with face wrapped in a floral headscarf and massive sunglasses, eventually shedding an overcoat to show that he’s wearing a dress and high heels, too. It’s a compelling show of contrarian anti-rock star eccentricity.

And what a show it is, bolstered by a setlist of bulletproof, set-piece bangers. The Ghost Of You still aches with tragedy and doomed romance. Thank You For The Venom ignites with pit-stoking fire. A mid-set salvo of Helena, Teenagers and This Is How I Disappear showcases the melodrama, mischief and mayhem that have always been at the heart of MCR. Dropping Welcome To The Black Parade, Famous Last Words and I’m Not Okay (I Promise) side by side late on underlines their qualifications as bona fide 21st century rock heavyweight headliners.

Indeed, although every My Chem show nowadays feels like an event, it is particularly intriguing to see them back in a festival setting. Held up alongside hard-touring contemporaries like Taking Back Sunday and The Wonder Years, their performance does feel a little disjointed. But it’s also laced with a dark magic that none of their peers ever truly tapped into. As they drop curtain with a contemplative The Kids From Yesterday and an impromptu singalong of Cancer, it’s impossible not to feel thankful that they got the show back on the road – and thrilled to see where it takes them next.