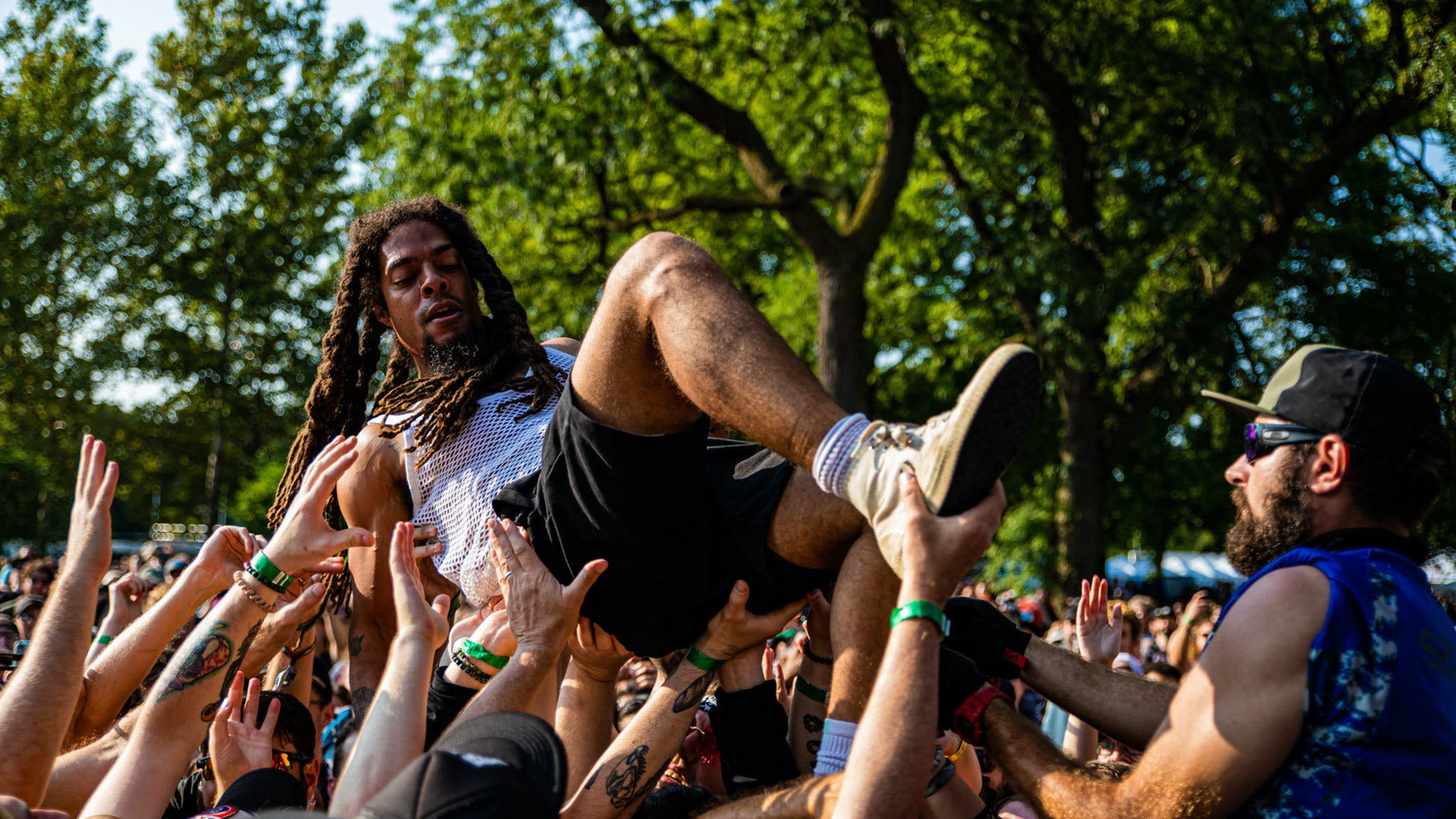 There’s a hell of a lot more to Riot Fest than raucous music. From stalls chock-full of horror movie merch and outlets for Illinois’ newly-legalised recreational substances to some of the best-dressed punters you’ll come across at an event of its type, the September fixture in Chicago’s sprawling Douglas Park feels like a broader celebration of the Second City’s booming alternative scene. Having been effectively closed to foreign visitors last year due to the United States’ stiff COVID travel restrictions, it’s back to full strength for 2022. Obviously, we were there as gates opened to chuck ourselves headfirst back into the nearest pit...

Thea Taylor will not be stopped. Accelerating her rapid rise with a coveted opening slot on Riot’s massive main stage, the artist better known as carolesdaughter delivers 30 minutes of alt. pop perfection. Although many of the fans who’d been queueing a mile down the road waiting for gates to open are clustered on the other side of the park to see Frank Iero pull double-duty with new band L.S. Dunes, those who turn out here to catch the likes of My Mother Wants Me Dead, please put me in a medically induced coma and unreleased highlight Car Keys get the better deal.

“This is definitely the biggest crowd that I’ve played at one of my bands’ first shows,” grins L.S. Dunes (and Circa Survive) frontman Anthony Green as the post-hardcore supergroup make their live debut on a packed Rise Stage. No shit. The MCRmy are out in full force for a glimpse of guitarist Frank Iero lighting it up (alongside Coheed & Cambria guitarist Travis Stever, and Thursday’s Tim Payne and Tucker Rule on bass and drums) before he headlines the main stage later tonight. Given they’ve only released one song – the brilliant Permanent Rebellion – simple unfamiliarity dampens the atmosphere a little, songs like Past Lives, Grey Veins and impassioned closer 2022 have the potential here to be truly brilliant.

It’s fascinating to see WARGASM tearing it up on the other side of the Atlantic. The Anglo-Irish collective might be performing in Riot Fest’s tightest corner, but they manage to crank some of the biggest vibes, spinning and swaggering through a familiar setlist in the blistering afternoon sun. Some moments (the ‘Drink, fuck, fight, love…’ sloganeering of D.R.I.L.D.O.) connect more cleanly than others (their customary cover of N*E*R*D*’s Lapdance) with this coolest-of-the-cool Stateside crowd, but new fans are queueing up to roar their approval by the set’s unhinged, scantily-clad conclusion.

Bob Vylan are on characteristically uncompromising form on Friday afternoon. The London duo might deal in a particularly UK-oriented brand of political punk rock, but they’re not interested in hanging around for any Americans struggling to keep up. Instead, we get fiery run-throughs of bangers like GDP and I Heard You Want Your Country Back, a prickly Stateside audience-reaction to the anti-Elvis tirade at the start of Take That, and – by our reckoning – what’s a fiery first live rewrite of England’s Ending: ‘Kill the king!’ Wicked And Bad, indeed.

As has seemingly been the case at every stop-off since they’ve returned, My Chemical Romance get what might just be the most hysterical reaction in the history of Riot Fest. Gerard Way is dressed in a headscarf, giant sunglasses, dress and fetching heels throughout, but other than that interesting aesthetic choice they deliver a set that feels familiar to those of us who caught their European shows earlier this summer. From epic opener The Foundations Of Decay through proven bangers House Of Wolves and Thank You For The Venom, the MCR catalogue is as brilliant as ever. And then there’s set-piece classics like Welcome To The Black Parade, Famous Last Words and I’m Not Okay (I Promise), which still pack enough dark magic to leave us thanking the emo gods that MCR got the show back on the road – and thrilled to see where it takes them next.

Ontario heroes Alexisonfire play the main festival and an electric aftershow. Their Saturday afternoon slot on the Radicals Stage is a short, sharp reminder of their unique brilliance, bookended by a frantic Accidents and bludgeoning closer Young Cardinals. They follow it in even more grandstanding fashion over at The Bottom Lounge, plumbing deep into the darkness and delirium of the small hours. The epic likes of Committed To The Con and Happiness By The Kilowatt offer the perfect platform for the extraordinary chemistry and vocal interplay between George Pettit, Dallas Green and Wade MacNeil. Astonishing, as always.

Something of a Riot Fest staple, you know you’re in for a good time when you catch The Menzingers in Chicago. The Pennsylvanian quartet deliver a 10th anniversary performance of terrific third album On The Impossible Past this afternoon, dropping heart-swelling classics like Gates, Sun Hotel, Casey and Mexican Guitars thick and fast. Overflowing with warmth and nostalgia, it’s a modern classic that works perfectly in the live arena. Even better, we then get a bonus salvo of I Don’t Wanna Be An Asshole Anymore, House On Fire and After The Party. The Menzos simply can’t stop dropping best-of-fest sets.

Next up it’s time for some real rock icons to Walk Among Us. When The “Original” Misfits first brought together their current line-up of vocalist Glenn Danzig, bassist Jerry Only, guitarist Doyle Wolfgang Von Frankenstein, additional six-stringer Acey Slade and drummer Dave Lombardo for Riot Fest in 2016, there was an almost unhinged level of excitement. There’s less anticipation this Saturday evening, but the performance feels far more confident and free-flowing. The 13 tracks of that aforementioned 1982 debut – best of the bunch: a demented Mommy, Can I Go Out And Kill Tonight? – fly by. Then we get another 13 uber-bangers, including Halloween, Last Caress and Die, Die My Darling to emphatically ram home their headline credentials. Can someone book them for a UK date now, please?

Even years into her career, Nika Roza Danilova – AKA Zola Jesus – isn’t a huge name in industrial / darkwave but, judging by Sunday’s stunning main stage showing at Riot, they’re headed in that direction. Marrying the dark, ethereal atmospherics of Chelsea Wolfe and Ceremony to the airy avant-garde of Björk, it feels initially odd to see menacing cuts like The Fall, Exhumed and Sewn unleashed in the blazing sunshine, but they do not wither in the heat. Rather, they’re still haunting our ear canals days down the line.

Amongst the increasingly eclectic soundscapes of festivals like Riot, Less Than Jake are a reassuring constant. Sunday afternoon’s high-energy performance does include a couple of cuts from 2020’s ninth LP Silver Linings but, aside from that, it could’ve been transposed from any point in the last 15 years. To be totally clear: that’s no bad thing. Flanked by flailing air dancers and toilet-roll cannons, the likes of Gainesville Rock City and The High Cost Of Low Living are absolutely perfect for sun-drenched outings like today. And, in All My Best Friends Are Metalheads, they’ve got one of the indisputable classics of the ska-punk genre. Another sizeable deposit in the skank bank.

Speaking of outfits who’re perfect for a glowing Sunday afternoon, they don’t get better than Jimmy Eat World. The beloved Arizonans attract a huge, headliner-worthy crowd over on the Roots Stage but go about their business with the same unaffected humbleness that they have for the best part of three decades. From Blister and Lucky Denver Mint to All The Way (Stay) and Something Loud, there’s incredible consistency throughout. Having been unable to celebrate 20 years of Bleed American during COVID, however, there’s a little extra emphasis on that record’s title-track, A Praise Chorus, Sweetness and inevitable closer The Middle today. Sing-alongs to be heard for miles.

Anything Olympia, Washington’s riot grrrl icons Sleater-Kinney lack in end-of-festival party vibes, they more than make up for in grit, integrity and ageless quality. With Carrie Brownstein and Corin Tucker to the fore, classics like Modern Girl, Dig Me Out and Jumpers rattle out, energising a flagging field at sundown on Sunday. Even more stirring is the confidence to draw more than half of this festival set from material originating after their 2015 reunion. Righteous closer The Center Won’t Hold searingly highlights a continued innovation that ensures none could accuse these legends of becoming any kind of nostalgia act.

Nine Inch Nails go one better, dropping an avalanche of hits while still feeling utterly cutting-edge. It doesn’t hurt that compositions like Wish, Heresy, March Of The Pigs, Sanctified and Burn were so far ahead of their time when released that contemporary players are still racing to catch up, but it’s the sheer relentlessness and machine-tooled accuracy that puts them on a different level tonight. Everything from the jittery single-camera video capture to the ingenious silhouetting in their light show feels thoroughly planned and painstakingly executed, with recent offerings like The Lovers and Less Than delivering the same electric urgency. Dropping in quick succession, Closer, The Perfect Drug, The Hand That Feeds and a chaotic, guitar-smashing Head Like A Hole bring a climactic catharsis that’s needed after a weekend like this. But then we’re plunged under once more by the skin-crawling Reptile and Even Deeper before spine-tingling closer Hurt sets us free.

Hopefully we’ll have recovered in time to see how America’s finest festival levels up once again this time next year.