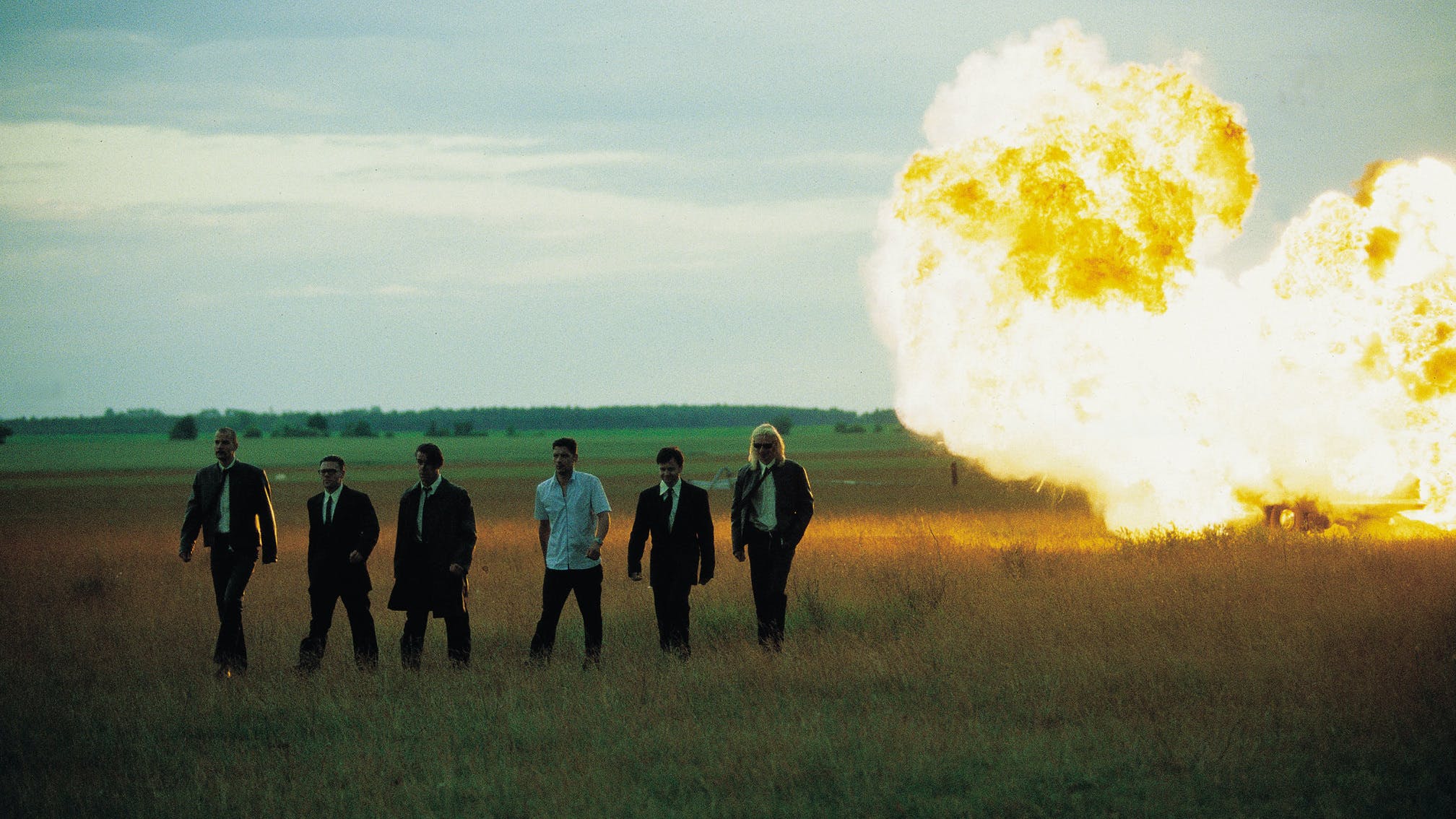 In April 2001, Rammstein appeared on the cover of Kerrang! for the first time. Decked out in leather, PVC and muscle, the image focused mainly on frontman Till Lindemann holding a Union Flag-clad Richard Z. Kruspe on the end of a dog lead (in the guitarist’s mouth, natch), under the headline ‘Freaks Unleashed’. Under that, we promised to take you ‘Inside the world’s most perverse band’.

As far as fulfilling that last bit went, it was all how you defined ‘inside’. Although they understood questions in English well enough, Richard and drummer Christoph Schneider spoke through a translator. Till Lindemann didn’t speak to us at all. They made some jokes – “Munich architecture is very impressive, especially the parts you English didn’t bomb,” being a particularly dry one – and gave some of their history of growing up in the GDR, on the Eastern side of the Iron Curtain. But in terms of what was actually going on inside their new album, Mutter, however, they remained as enigmatic as ever (“Our music is famous,” said Christoph, “We are not”).

“We do the opposite of what other people do,” said Christoph, succinctly summing up where his band stood in the pantheon of rock in the late ’90s. “If a metal band had long hair then we would have short hair, if they were wearing sports gear then we would wear boots and other types of clothes.”

Prior to this, Rammstein’s performances on UK soil had numbered two, and one of those was an appearance on MTV’s Hanging Out, for which they were billed as “David Lynch’s favourite band”. The other was a tiny show at London’s Powerhouse in November 1997, at which their famed firepower was diminished by the small venue and the law. Had they appeared on Channel 4’s EuroTrash, they would have fit well with the show’s double-edged ‘look at the crazy continentals having fun we’re missing out on’ banter.

A little over a year after the K! cover hit the shelves and Mutter was released, on only their third ticketed visit to London, they had sold out the Docklands Arena, beginning to mirror the success they were having at home. Rammstein were still freaks, and still unknowable, but with one of the first truly great metal albums of the 21st century (the comparison we made at the time in terms of artistic brilliance, scale and ambition was to Tool’s Lateralus, released the same year), the German sextet had, without really saying much, showed us exactly who they were.

Mutter had been written in the winter of the millennium, and recorded in the summer of 2000. Their success in Germany had brought big hopes for the album, as well as a bigger production budget which enabled them to work in Studio Miraval in southern France. For scale, this facility had previously been used by Pink Floyd to make The Wall, Judas Priest for Painkiller, and AC/DC to do Blow Up Your Video.

It was here that Rammstein stripped some parts of themselves down, and inflated others. Focusing on the absolute essentials of the songs to keep things as clutter-free as possible – an artistic lean that would give future lazy journalists the opportunity to tediously bring up “German efficiency” – the backbone was built of doomier, more stately rhythms than before, a sturdier foundation on which to put more grandstanding flourishes. It would also allow for a more human, sweaty sturm und drang to shine through, where previously machines had done a lot of the heavy lifting.

“The main thing about the new album is we didn’t want to make another Sehnsucht,” Christoph told Pulse around Mutter’s release. “We wanted to get away from the techno style, from the dance-oriented style. We wanted to sound more natural, more like a rock band. So we focused more on live drums, we experimented with acoustic guitars, and also tried to find innovative guitar sounds. And we used an orchestra for the first time.”

"On our first and second album, we were very dependent on samplers and computerised music machinery, even to write the songs,” added Paul Landers. “And with Mutter, we really based the songs on the guitar and are only using technology to enhance it, to give it flavour. So we didn’t want to be slaves of the machines anymore.”

The first look at this new version of Rammstein was an online snippet of the song Links 2 3 4, followed by the full single and video for Sonne. Inspired by having Snow White And The Seven Dwarves on television while the album was being mixed, and noting how well the song’s drama went with the visuals, the clip found the band working in a coal mine for an enormous Snow White.

“We wanted to show the Grimm brothers’ version of the fairy tale, and sometimes that side is quite cruel and violent,” explained Christoph. “We are the dwarves, so to speak, who on the one hand adore this woman and on the other hand hate her at the same time. Because the dwarves have to work for her and get her the drugs. And in return we get to look at her and enjoy her beauty.”

Along with the more direct nature of the music, the darkness of Mutter was also more easily translated in its bluntness. English-speaking listeners may not have understood much of it, but they used this as something of a secret weapon, giving away just enough to sting. The title-track in which Till cries for his ‘mutter’ gives clue with one easily understood word, while Zwitter’s title translates, without holding back, as ‘hermaphrodite’.

On the rare occasions when the band lifted the curtain somewhat, what was revealed only posed more questions, ones that wouldn’t get answered, further adding to the puzzle. Of the song Spielhur, which tells of a boy buried alive with a music box, Till, in a rare moment of talking to the press in the Pulse interview, explained, “It’s the basic fear people have, to be buried alive. The toy clock that is given into the grave is what ultimately saves the child, so it’s ultimately a good story. Originally, it was supposed to stay in the grave, but then we decided within the band that we wanted the story to end well, that we wanted the child to be saved.”

Where there was no ambiguity, however, was in addressing accusations of Nazi sympathies that had been levelled at the band. “Being called Nazis obviously makes us very happy,” said Christoph during the Kerrang! interview, with no small amount of tired irony. Though some of this can be traced to a hangover of the “yer dad” view that Germany was in some way still not to be trusted (a standpoint that becomes especially stupid when you consider which bit of Germany Rammstein actually hailed from), this fire wasn't exactly one the band hadn’t partly stoked themselves, however naively.

For the video accompanying their cover of Depeche Mode’s Stripped, the band had elected to use footage from Reich-era German filmmaker Leni Riefentsahl’s work Olympiad, from the 1936 Berlin Olympics. Riefentsahl had become a particular favourite of Hitler’s, after filming the 1934 Nuremberg rally for the infamous Nazi propaganda film Triumph Of The Will. It was meant to be artistic provocation. Not everyone saw it that way.

“I think you can describe us as being young and naive as far as that situation goes… We were attacked by the press and we felt very helpless, and that was down to our naivety,” explained Paul Landers. “But from my point of view we did the right thing. We have always taken things to the extreme – extreme texts, extreme shows – behaved in an extreme fashion, and we’ve always tried to be provocative. Our lyrics can be interpreted in different ways, but never leaning to the right. But if you present lyrics that can be interpreted in different ways than you can only expect that people will interpret them in different ways.”

“We are a deliberately provocative band,” said Christoph. “And the high point of our provocation, of course, was that Leni Riefenstahl video. And we did that because we wanted to shock the people who thought we were from the right; like, if you think that’s how we are then, here, have something that will really shock you. Looking at it from today’s point of view though, it’s not something we would do again.”

As a riposte, Mutter included the song Links 2 3 4, in which Till sings over a marching, martial beat of how, in fact, Rammstein face the Left, and had been smeared by those misreading their art - ‘Sie wollen mein Herz am rechten Fleck / Doch sehe ich dann nach unten weg / Da schlägt es in der linken Brust / Der Neider hat es schlecht’ (‘They want my heart in the right place / But when I look down / It's beating in my left breast / The jealous were wrong’).

“We tried singing in English when we first started out,” Christoph told us at the time, as all this stuff was calibrating and about to come good. “But we realised that it didn’t suit us, and we realised that Till’s lyrics, which are very strong, don’t translate well. So we decided to continue singing in German. And people used to come up to us and say, ‘Oh, what a fantastic band you are, it’s such a shame that you sing in German’.”

And the point of this?

“They were basically saying that we had no future outside of Germany. That we had no chance of making it anywhere else.”

Twenty years on, nobody’s laughed harder about this than Rammstein.