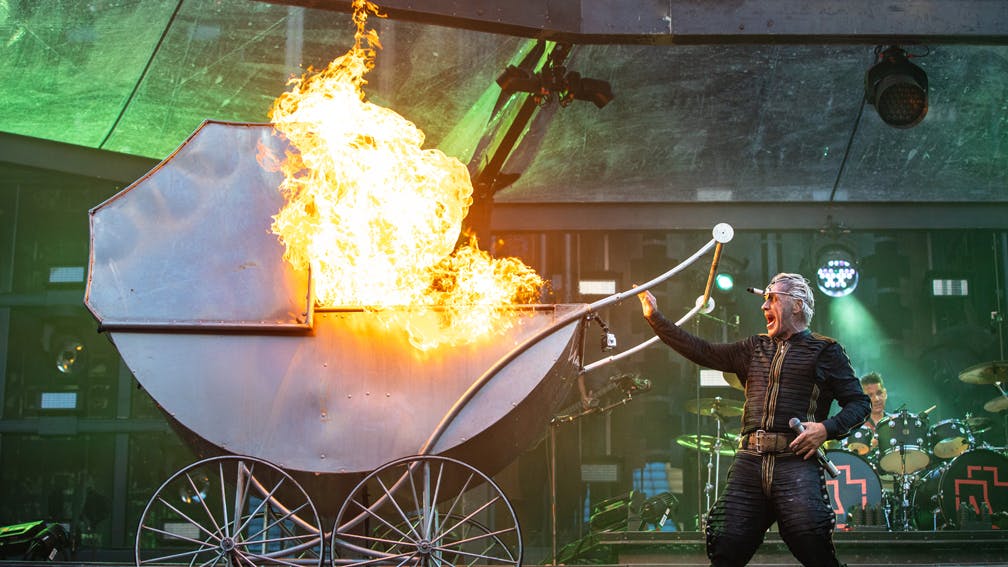 Most gigs begin in the same sort of manner: the lights go down, the crowd screams, some music will blare or a pre-show video will play, building up to the band’s arrival. However, this is a Rammstein show. It’s going to be different. It’s going to be bigger. In this spirit, they announce themselves by letting off a massive explosion that will have likely made every one of the 30,000 spectators gathered at the oh-so-rock’n’roll-named Coventry Building Society Arena jump out of their skins.

The Neue Deutsch Harte troupe arrive in characteristically flamboyant dress – bassist Oliver Rideland is wearing a Grim Reaper-esque black cloak, keyboardist Christian 'Flake' Lorenz sports a shiny gold suit, and Till Lindemann is clothed in a magnificently heavy looking coat. There’s barely a moment to recover before thy charge through opener Armee der Tristen. It’s arguably a slightly left-field opener, and a pretty ballsy choice considering it was only released two months ago, but its dark stateliness and floor shaking bass suit this atmosphere, and their dystopian, industrial looking set-up, fantastically. As smoke billows into the pale blue sky from the pillars among the crowd, it feels like something more than a concert. Even to say it feels like theatre still doesn’t quite describe it aptly enough.

As the theatrics become more outlandish, the anticipation builds for what they'll do next. The macabre Puppe is an unforgettable highlight, where a metal pram with a creepy looking doll inside is brought onstage, and then set on fire, in a moment that’s somehow both ominous and bonkers. Later, Till performs Mein Teil in the traditional oversized chef’s hat, holding a long knife, eventually taking a giant blowtorch to a metal cauldron with Flake standing inside it. And, of course, it would be criminal not to commend the ridiculous of wheeling out the now traditional penis-cannon for Pussy.

However, it’s never a case of style over substance, and Rammstein know when to let the music speak for itself. Zeit is made all the more majestic by its minimalistic approach to its staging, and it’s a moment where Till’s sonorous bellow is the spectacle in its own right. Meanwhile, all Du Hast needs is a colourful light show to get off the ground – the fervour from the audience means it can take care of itself, but it’s never handled complacently. Instead, its saw-edged riffs and throbbing percussion create a party atmosphere all on their own that can still be felt even as the song ends and the band launch into the equally skyscraping Sonne.

There’s one particularly tender moment in the encore. Engel sounds beautiful played on a piano on an island-like stage in the middle of the crowd, as 30,000 phone lights are held aloft, before the members of the band return on white dinghies, holding up a sign reading ‘WILKOMMEN’ when they arrive. For this to be done just a few songs before they bring the penis cannon out, and for both these moments to feel on-brand for Rammstein, speaks volumes about just how versatile they are, to the point where they could be capable of anything.

In fact, only they could put on a show like this, and that fact alone says everything about how special they are as band. Tonight is legendary stuff – everyone who likes rock music needs to see Rammstein in concert at least once in their lives.