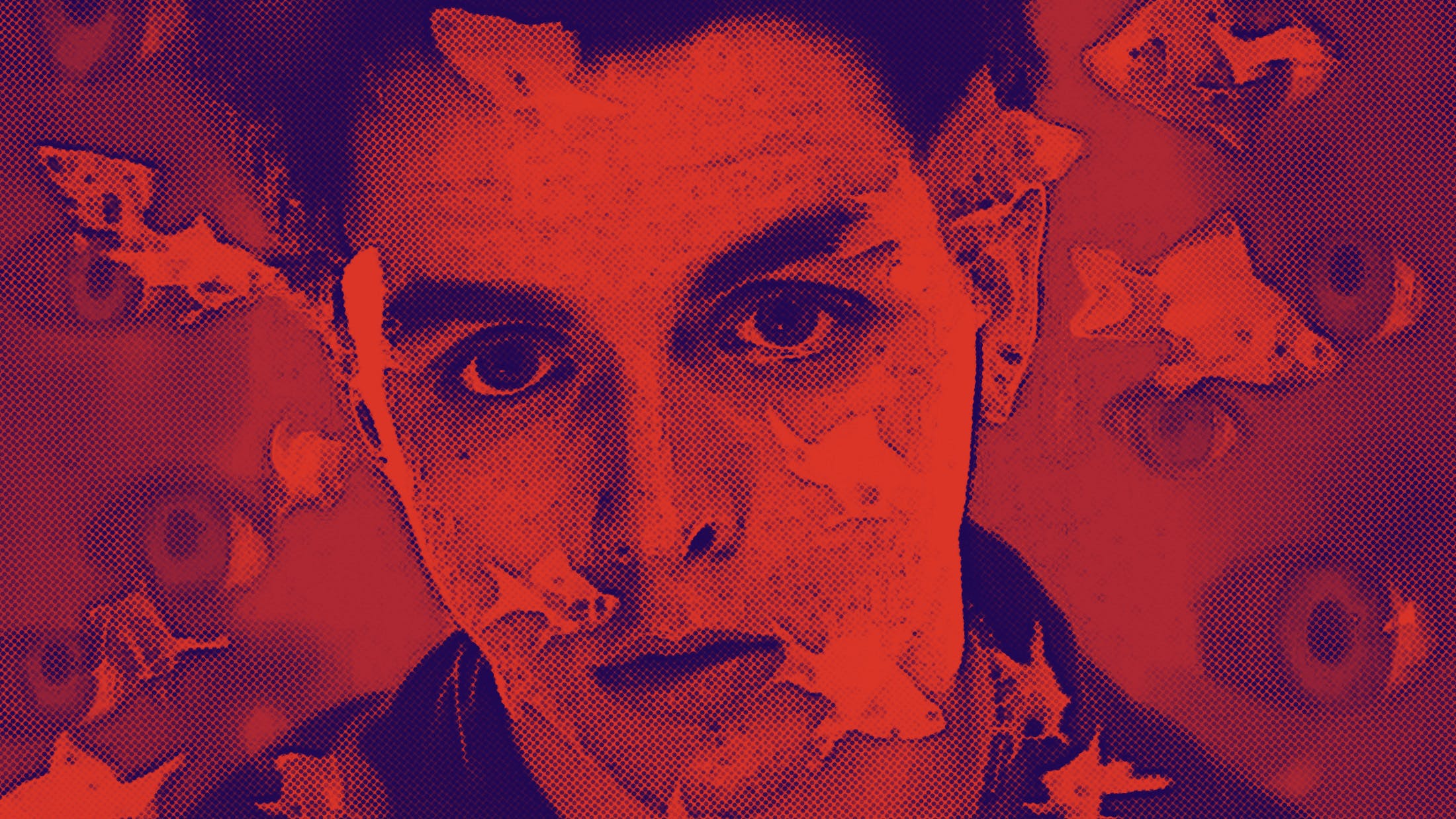 It’s nuts to think of a world without Green Day. They’ve been around forever, and are perpetually being ‘discovered’ by teenagers the world over. Absolutely everybody has gone through at least one Green Day phase. Some of us are happily still in theirs 25 years later.

1994’s Dookie was their third album, and Basket Case the third single from it, but this was the song that really put them on the map, and turned them from a scrappy, high-as-hell trio of dudes into global superstars. The song, which frontman Billie Joe Armstrong has described as “a loser national anthem… for weirdos”, is one of their signature tunes – it’s probably tied with Good Riddance (Time Of Your Life) as the one you’d be annoyed about them not playing at a show.

So, let’s travel back a quarter of a century and dive headfirst into the award-losing, technicolor vision of insanity that is Green Day’s Basket Case video.

Let's have a recap, first…

0.02
This is Blue, Billie Joe Armstrong’s famous Fernandes Stratocaster, also seen in the videos for Longview, Geek Stink Breath, Stuck With Me, Brain Stew/Jaded, Hitchin' A Ride and Minority. He has had copies of it made, complete with stickers, by the Fender Custom Shop. Billie Joe’s mum bought Blue for him from his guitar teacher, George Cole, who had apparently got it from Santana member David Margen.

0.09
You immediately notice something about the colours in this video – they’re just kind of… off? And hang on, was the guy facing away from the camera in the previous scene in black and white? Amazingly, the footage was shot in black and white and the colour painstakingly added in later, hence the oversaturated, surreal look.

0.17
The track has no intro, pretty atypical for the time, when radio airplay was such a big factor in a song’s success and DJs would typically chat over the opening bars. Tré Cool has said this was due to the band insisting on keeping everything as simple as possible, and cited the Beatles’ similarly intro-less first album Please Please Me as an influence on Dookie.


0.33
Billie Joe Armstrong is doing a really good 'mad eyes' thing here, which the colour thing just adds to. It might be a homage to John Lydon’s mad eyes, or it might just be mad eyes.

0.42
We’re in a psychiatric facility, of course. The video was shot in a real one, the Agnews Developmental Center in Santa Clara, California. It used to have the extremely problematic name Agnews Insane Asylum. “It was Tré’s idea to do a video in an insane asylum,” Billie Joe told MTV. “We found outpatient files of shock treatment therapy, and this old dentistry [equipment] that was really awful looking. We [found] mouldings of people’s teeth that were gross, so we brought them home to use them as ashtrays and stuff.”

0.54
'I think I’m cracking up!' sings Billie Joe. Basket Case was written about panic attacks, which he suffered from – he was later diagnosed with an anxiety disorder, but at the time thought he was simply losing his mind. “But to say it’s about panic attacks is limiting,” he later said. “It’s about going through total confusion. I think of a song like American Idiot as feeling, okay, there is a lot of chaos in the world, people getting murdered. There is no way to make sense of a world like that. You feel like a victim of it. Basket Case is the same way.”

0.58
He was stoned a lot of the time, as the whole band were – they owe their name to their fondness for the green stuff.

1.02
There’s a lot to be said about the texture of both Mike Dirnt and Tré Cool’s hair in this video. It’s admirably, 'Yeah, I washed it and it’s just sitting like that.' They both pull it off, but it’s touch and go.

1.05
Director Mark Kohr worked with Green Day more than any other band, making nine of their videos in total. He also made No Doubt’s Just A Girl and Less Than Jake’s Dopeman among many others.

1.07
The orderlies all wearing white outfits and bow-ties is a reference to Milos Forman’s One Flew Over The Cuckoo’s Nest, starring Jack Nicholson, Louise Fletcher and Danny DeVito. The 1975 film was the second ever to win all five major Oscars – Best Picture, Actor in Lead Role, Actress in Lead Role, Director and Screenplay (the first one was It Happened One Night in 1934). The next to do that was 1991’s The Silence Of The Lambs, and it’s never happened since.

1.17
The ‘whore’ is a dude, of course, which was quite a shocking thing to say back in the ’90s. Billie Joe later told Rolling Stone: "I wanted to challenge myself and whoever the listener might be. It's also looking at the world and saying, 'It's not as black and white as you think. This isn't your grandfather's prostitute – or maybe it was.'"

1.23
It’s worth pointing out that both Tré Cool and Mike Dirnt have names that, if they couldn’t back them up by being in one of the most successful bands of the last 30 years, would be seen as very silly. Tré Cool’s real name is Frank Edwin Wright III, and it’s the III at the end that became a sort of multilingual pun on the Spanish word for 'three' and the French word for 'very'. Dirnt, meanwhile, is the sound a bass makes.

1.48
One Flew Over The Cuckoo’s Nest’s Nurse Ratched, who this character is a direct reference to, is soon to be the focus of a Netflix show from American Horror Story creator Ryan Murphy, portrayed by Sarah Paulson.

2.10
Sterling acting from Tré, a drummer who is extremely at ease with his flamboyant side, traditionally ending gigs by setting his drum kit on fire. Billie Joe told Rolling Stone: “The first time I ever saw him play, Tré Cool was wearing a tutu and an old-woman swimming cap.”

2.20
Another One Flew Over The Cuckoo’s Nest nod – it’s really worth seeing, so go and watch it, but two really important moments involve a water cooler smashing through a window.

2.40
Pachelbel’s Canon, one of the most famous pieces of classical music ever written, completely rips off the chord sequence of Basket Case. Like, it was written 190 years before Green Day wrote their song, but still.

3.02
And there we go. Great times. This video was nominated for nine MTV Video Music Awards in 1995 and didn’t win a goddamn one. TLC beat them in a few categories, as well as Weezer, White Zombie and the Rolling Stones. Also, you can just about sing “We lost to Weezer and the Rolling Stones” to the tune of, 'Am I just paranoid? Am I just stoned?’ so that’s something. Cheers!