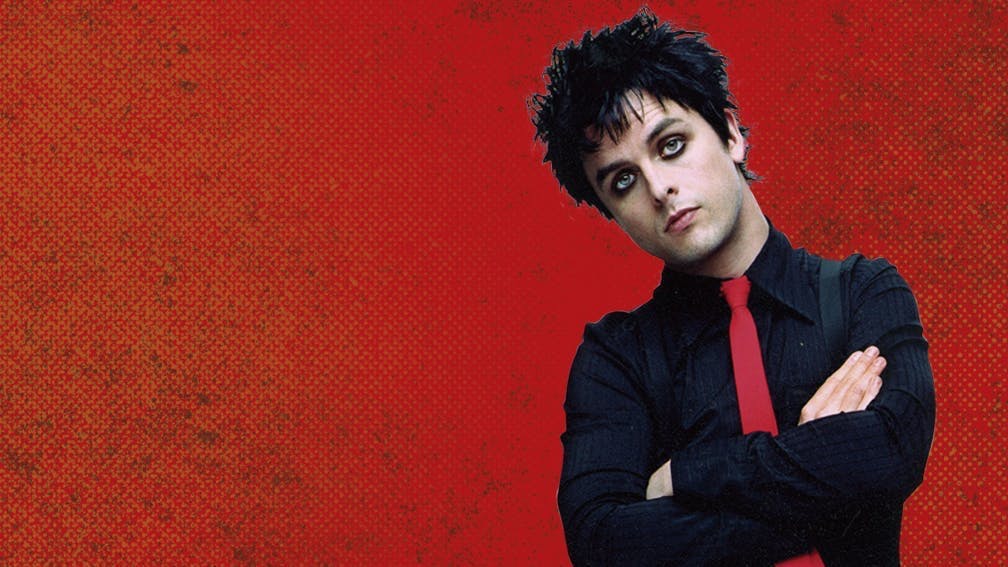 Who doesn’t love Green Day frontman Billie Joe Armstrong? In his honour we decided to furnish you with a whole bunch of little-known – or maybe even unknown – facts. Because we’re generous like that. Enjoy…

1He’s probably one of the first blue collar punks

As well as being a budding jazz musician, Billie Joe’s father, Andy Armstrong, was also a truck driver for Safeway Inc. It was his dad’s profession that gave the son his first taste of blue-collar politics. In the song Too Dumb To Die, from Revolution Radio, he recalls these times in the lines ‘My daddy was always on strike… the picket line screamed / Don’t cross the line / Because you’ll be a scab not a martyr.’

2He has a special, long-standing connection to ‘Blue’

At the age of 10, Billie Joe bought his first guitar. Given to him by his mother, Ollie Jackson, the Fernandes Stratocaster copy was given the name ‘Blue’, and the guitar has been played for part of every single Green Day concert the band has ever played.

3He and Mike Dirnt go way back

Friends since the fifth grade, following the death from cancer of Andy Armstrong, Billie Joe, then aged 10, and Mike Dirnt grew especially close. With Ollie Jackson at work and Mike’s parents running a bar, the pair would busy themselves causing mischief in their hometown of Rodeo, California. These times were later recalled in the song Outlaws, and the lines ‘Scars / Broken hearts / Running in the light of the moon / Lost souls / Bottle rockets.'

4His mum liked her job, actually

Billie Joe would in time feel guilty about the lines ‘My mother said to get a job, but she don’t like the one she got’, from Longview. In fact, his mother, a waitress, did like her job, and continued to serve diners long after the point at which her son could keep her in the style to which she had never been accustomed.

5And she played a huge part in the Green Day story

In fact, it was Billie Joe’s mother who helped secure her son’s band their first gig. Then named Sweet Children, the formative Green Day performed at Rod’s Hickory Pit, Ollie Jackson’s place of work, on October 17, 1987, in front of an audience of 30 people.

6Punk is part of his DNA

Billie Joe’s conversion to punk was sudden. “I became a punk at the same time that we became a band,” he would later say. A moment of epiphany occurred while watching MTV, and reacting in horror as The Primitives’ pop-punk gem Crash came in second place in a video face-off against a band about whom he remembers nothing. In the space of three minutes his thoughts went from, ‘This is going to be great! This is a great song! Finally we’re going to get something good!’ to, ‘Fuck this channel [and] fuck the radio – I just can’t take it any more.’ Realising that he wanted in on the scene, he remembers feeling “like, I don’t care if I become popular or famous. This is the kind of music that I love. This is the style I love, and this is what I want to play.”

As a young Northern Californian punk, Billie Joe Armstrong was a fan of Operation Ivy, the band from which Rancid would emerge. He once attempted to hustle his way into a sold-out Op Ivy show at the punk club 924 Gilman Street in Berkeley by stopping the band’s guitarist, Tim Armstrong, outside and saying, “Hey, can I come in? We have the same last name!”

8He has impeccable timing

Billie Joe first heard Tré Cool play the drums at a concert Sweet Children played at a property in the mountains of Northern California. After performing by candlelight, and powered by an electricity generator, Billie and Mike Dirnt were drawn to the sound of a drummer playing in a manner superior enough for the group’s two-person string section to widen their eyes in each other’s direction. With the two musicians tiring of their own drummer, Al Sobrante, Tré Cool’s timing was perfect in more than one sense.

9He loves one fan more than any other

Billie Joe met his future wife, Adrienne Nesser, at a Green Day show at 815 6th Street in her hometown of Minneapolis on July 4, 1990. The subject of the song 2000 Light Years Away, from 1991’s Kerplunk album, the pair would marry on July 2, 1994. On the subject of this relationship, and his own fidelity, Billie Joe would later remark that, “I’ve never slept with a groupie.”

When Rancid were in the market for a second guitarist, Billie Joe deputised for a single show at Gilman Street. When asked about the possibility of the Green Day frontman joining the band on a permanent basis, Tim Armstrong laughed and answered, “He’s doing pretty good with his own thing.”

11Friendship is stronger than a signature

Although Larry Livermore’s label Lookout! Records issued Green Day’s first two albums, 39/Smooth and Kerplunk, the band never signed a contract with the company. With the trio set to leave for Warner Bros. Records, Larry presented them with a contract that ensured that Lookout! would retain the rights to the two LPs, as well as two EPs, that had been recorded for Lookout. The final clause read, ‘Lookout Records and Green Day agree to treat each other with respect and openness at all times, and recognize that while this agreement provides specific guidelines as to what is expected of each other, the truest contract is one based on trust and friendship.’ Next to his signature Billie Joe drew a doodle of an amplifier.

Of the songs written for Green Day’s blockbusting third album, Dookie, only one didn’t make the cut. It was a restrained acoustic number that Billie Joe Armstrong played alone. Its title was Good Riddance (Time Of Your Life). The reason for its exclusion was that it didn’t fit with the rest of the material written for the record. The song, of course, would emerge three years later as the biggest hit single from the band’s fifth album, Nimrod, and it would be used as the closing music for both the last episode of the brilliant U.S. sitcom Seinfeld, and the soundtrack used by ITV to herald England’s predictable exit from the 1998 World Cup finals.

One of the most remarkable aspects of the success of Dookie was just how little press the band undertook to promote it. In fact, the only interview the band consented to give to a mainstream publication in the United States was with Spin magazine in the autumn of 1994. Less than pleased with the results, at a concert at the Aragon Ballroom in Chicago Billie Joe held up the magazine and set it on fire, telling the crowd that “this is a crock of shit, and if you believe it you are too.”

14He doesn’t care for your judgement

Not everyone was thrilled with the success of Dookie. Walking on Haight Street in San Francisco in the early days of 1995, Billie Joe Armstrong was accosted by a character he described as looking “like a really early-’80s English postcard punk”. The young man had an oppositional attitude. “I remember I almost got into a fight with him,” recalled the singer. “He was shouting ‘Sellout!’ at me. I was, like, ‘What the fuck do you know about me, or my band?’”

When Green Day released the coiled and fizzing Insomniac album in the autumn of 1995, many took the title to be a reference to the band’s fondness for amphetamines. But the album was named in honour of the lack of sleep Billie Joe and Adrienne were getting following the birth of their first child, Joseph Marciano Armstrong, on February 28, 1995.

16He’s used his voice for more than just singing

Billie Joe made his not-quite-onscreen acting debut in 1997 on the Fox animated comedy series King Of The Hill. The singer provided the voice of the character ‘Face’, a local musician who was in a band with two friends, voiced by Mike Dirnt and Tré Cool.

Billie Joe Armstrong made his onscreen acting debut proper in an episode of the short-lived supernatural drama Haunted, playing the role of Irv Kratser in the episode Simon Redux. Not encouragingly, the show was cancelled just two episodes later.

18He celebrated his 30th birthday in, er… style

For his 30th birthday, one of Billie Joe’s friends presented him with a toilet seat. It was a homemade affair and featured the logos of bands that the singer hates. Those on the – ahem – shit list include Nickelback, P.O.D. and Creed.

In 2003, Billie Joe left the Bay Area and rented a small apartment in Manhattan’s East Village. The purpose of this sojourn was to harvest new material for Green Day’s as-yet-unannounced seventh album. As well as walking the New York streets late at night, the frontman participated in jam sessions in the basement of Hi-Fi, a bar in Manhattan, with local musicians such as Jesse Malin. The songs Boulevard Of Broken Dreams and Are We The Waiting, included on 2004’s classic American Idiot, are just two that emerged from this busman’s holiday.

20He probably won’t read this

Billie Joe Armstrong doesn’t read his own press, which is annoying considering that over the course of the past 25 years, Kerrang! has written somewhere in the region of 14 million words about him. The reason for avoiding reading any press? “I think it’s corrupting,” he says, “it compromises the music.”