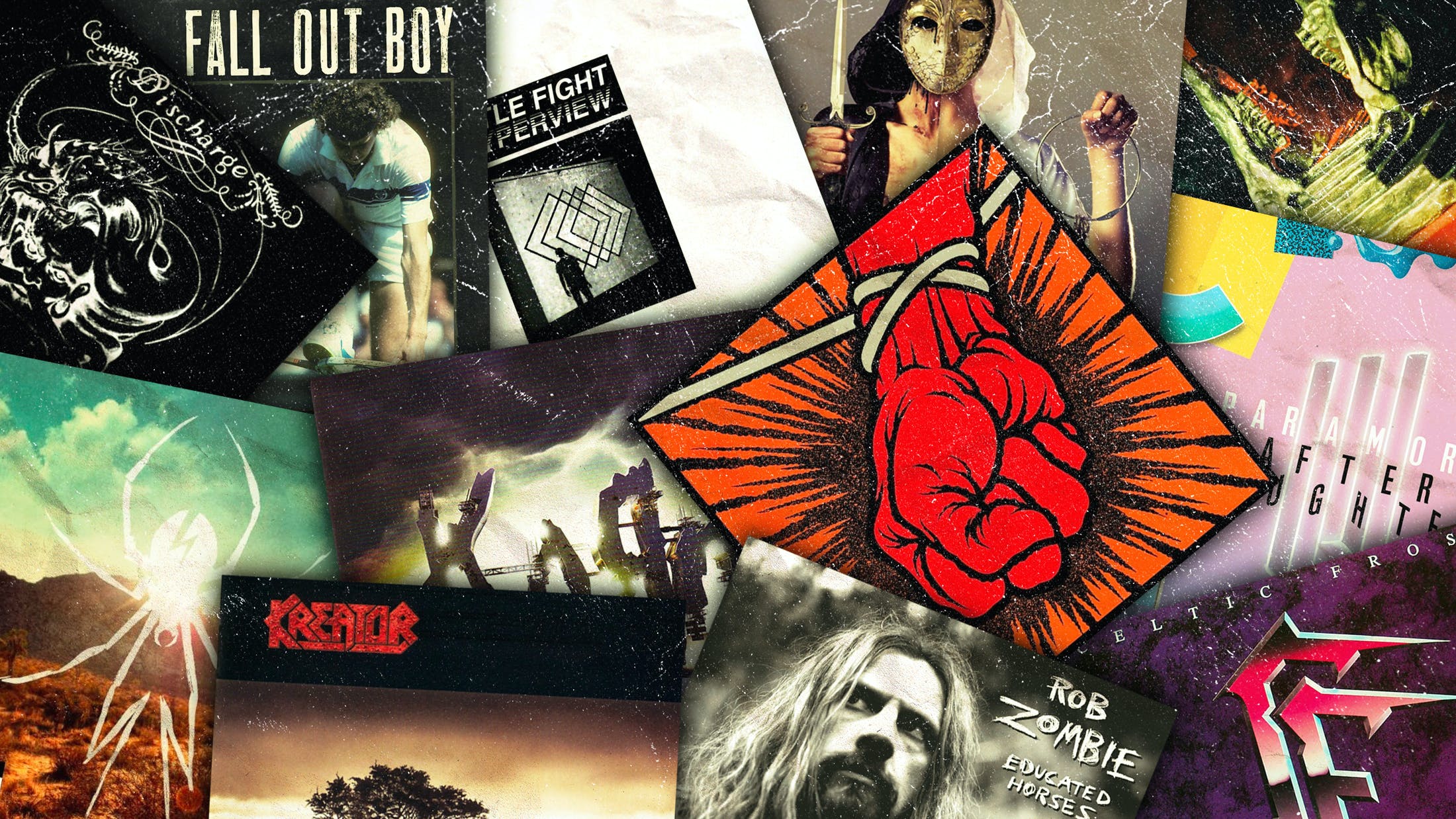 From a fan’s perspective, it’s important to remember that as bands age and people change, taste and creative visions change, too. Some bands establish a specific sound early in their careers and never feel the need to adjust what works (or doesn’t), but others get bored really easily and are constantly in a state of sonic flux.

However, most bands – even the ones with iconic sounds that remain relatively consistent – have at least one weird album in their discography. Sometimes it’s a bucket list nod to their roots, or a much-needed breather from what people expect of them.

Below are 12 odd-man-out albums from famous thrashers, beloved pop-punkers, nu-metal pioneers, and more. Some are great, some not so much, but all of them prove that change is often inevitable, and serve as a reminder to stick with your favourites through the good and the bad.

My Chemical Romance – Danger Days: The True Lives of the Fabulous Killjoys (2010)

During their heyday, My Chemical Romance made the most quintessential 'emo' album of all time, a goth-pop-punk opera about death called The Black Parade. And four years after establishing themselves as the universal poster boys for doom and gloom, they dropped the unabashedly colourful and carefree Danger Days: The True Lives Of The Fabulous Killjoys. It’s a ray gun beaming out kaleidoscopic rainbows compared to everything the band released prior, and although its merits are still a contentious debate within MCR’s cult fanbase, it’s one of the most surprising left-turns of the 21st century.

For some reason, Korn’s 2011 link-up with a bunch of trendy dubstep producers – namely Skrillex, who was in the midst of international fame for bringing metallic dubstep to the mainstream – felt like a bizarre experiment when it first happened. But looking back, it makes total sense that one of the most uncompromisingly experimental metal bands of the last 30 years would try their hand at an age-old taboo: mixing dance music with metal. Some of the collaborations on The Path Of Totality sound dated and clunky today, but it was an admirable attempt at uniting two different sects of headbangers.

Essay prompt: why Discharge’s second record caused the hardcore scene’s sell-out paranoia. Grave New World, the album that followed up their influential and still-fucking-awesome hardcore punk debut Hear Nothing See Nothing Say Nothing, is one of the most baffling diversions in the history of rock. The group went from gnarly d-beat to arena-minded hair metal in just four years, completely isolating their fanbase in the most confounding way possible. Fortunately, the band recalibrated when they reformed in the early ’90s, but to this day Grave New World is laugh-out-loud absurd.

Emo-punk royals Fall Out Boy returned from hiatus in 2013 to drop their most maximalist pop record yet, the ironically-titled Save Rock And Roll, and have since enjoyed a second wind of fame with a run of successful more-pop-than-punk albums. However, a few months after SR&R, the quartet surprised fans with the rawest, loudest and punkest set of songs they’ve ever put to wax. PAX Am Days was recorded over a marathon two-day session as an ode to FOB’s roots in hardcore. It almost sounds like a completely different band, and although some of the hooks feel shoehorned in, it’s full of refreshingly lo-fi slappers from one of punk’s most hi-fi institutions.

Smack dab in his transition period from industrial metal superbeast to cult-horror auteur, Rob Zombie put out a decidedly un-industrial album called Educated Horses that veers into folk-rock and Alice Cooper-esque glam. And, honestly, a lot of it totally slaps, which should come as no surprise given this dude’s run from industrial noisemaker (White Zombie), to horror-camp figurehead, to his 2010’s interest in psychedelic hayride staples. For an extremely OTT guy, Educated Horses sees Rob Zombie at his most stripped-back, revealing that his appeal stems not from his flash but from his inner fire.

Title Fight were in a weird spot when their 2012 opus Floral Green made them both a household name in hardcore, and the leaders of the burgeoning 'soft grunge' scene that aligned them with bands like Citizen, Turnover and Basement. Their pluralistic fanbase was prepared for them to take either route, but instead they threw everyone off with their detour into full-on shoegaze on 2015’s Hyperview. Interestingly, it launched them into the attention of Pitchfork hipsters and left some of their hardcore-minded fans without their fix. Ultimately, Hyperview is Title Fight’s most successful album to date, and its sound is the one many people identify with them. However, it’s still the lone wolf compared to the kinetic jams they cranked out just a few years before…

Bring Me The Horizon – There Is A Hell Believe Me I’ve Seen It. There Is A Heaven Let’s Keep It A Secret (2010)

Although Bring Me The Horizon’s modern fascination with arena-sized electro-pop is the farthest possible thing from their early work as a deathcore band, their third album (and bona fide mouthful) There Is A Hell Believe Me I’ve Seen It. There Is A Heaven Let’s Keep It A Secret is a far cry from both sides of their discographical binary. The record captures the band’s fledgling ambition to do more; the melody in the record’s gargantuan gang vocals and numerous clean features; the piano, distortion breaks, and guitar solo in the sidewinding penultimate ballad Blessed With A Curse; and the massive strings and glitchy post-production effects that are sprinkled throughout the album. In the era of Asking Alexandria breakdowns and A Day To Remember pop-punk hooks, this record is both an odd-man-out for the band and the metalcore scene as a whole.

Celtic Frost’s bemoaned 1988 comeback (under a completely new line-up) Cold Lake presents an interesting quandary in the streaming age. At the time of writing, the record – which was hated by fans, critics and eventually the band – isn’t available on streaming services or for purchase. Therefore, it’s easy to forget that the black metal forefathers even released their comical attempt at Mötley Crüe cosplay, creating this fascinating circumstance in which the band have effectively 'erased' the album from existence. Alas, it is accessible on YouTube and various other hubs for archiving classic albums, so you can search for it and hear just how ridiculous Celtic Frost sounded trying to wear hairspray with a straight face after creating three of the most incredible first-wave black metal records of all time.

Paramore soared into the ranks of radio-pop fame with their 2013 single Ain’t It Fun, a strikingly jovial switch from the riotous pop-punk they cut their teeth in during the 2000s. However, the self-titled record that single came from is still far moodier and more similar to their roots than their 2017 plunge into sugary pop, After Laughter. From the bright purple album artwork to its infectious, ’80s pop-influenced sound, After Laughter is a really great maximalist pop album – but also a wild deviation from the Paramore we knew up until that point.

The nu-metal/industrial years weren’t just a difficult time for American thrash bands; they resulted in a worldwide epidemic of flailing mediocrity from the genre’s titans. On their 1999 record Endorama, Kreator thought they could beat out the rising threat of Rammstein by adopting their gothic industrial into their tried-and-true thrash formula. To no-one’s surprise it didn’t work, and today it sounds dated, clumsy and completely ineffectual within their otherwise strong discography.

Australian psych-rock troupe King Gizzard & The Lizard Wizard have played dress-up with their sound before. During their notorious five-album output of 2017, the group toyed with contemporary jazz and rented some combat boots for their metallic sci-fi concept Murder Of The Universe. However, none of their previous experiments rendered them unrecognisable – until Infest The Rats’ Nest. Most of this record sees the band adjusting their production, their instrumental tones, and their vocal styles to adopt a straight-up Big Four thrash sensibility. It’s more than just a brush with metal, it’s a full-throttle commitment to capturing the genre’s anger and energy, and it results in some moments that genuinely sound like they could’ve been recorded in 1987 by a bunch of kids binging on Kill ’Em All.

As though we’d forget. Flanked by the impenetrable dominance of nu-metal and more than 10 years since their last universally heralded release, a flustered Metallica opted for an (ill-fated) grasp at relevancy over sticking to their beloved meat and potatoes. St. Anger was Metallica’s poorly thought-out attempt to win over Slipknot fans simply by cranking the drums, conjuring the worst possible snare tone imaginable, and assuming that fans wouldn’t miss their signature guitar solos. Thankfully, it remains the lowest point in the band’s career and a helpful template for what not to do when a band is faced with being eclipsed by the latest trends (although songs from the record have become fan-favourites during their live show, if only for the contentiousness of it all).