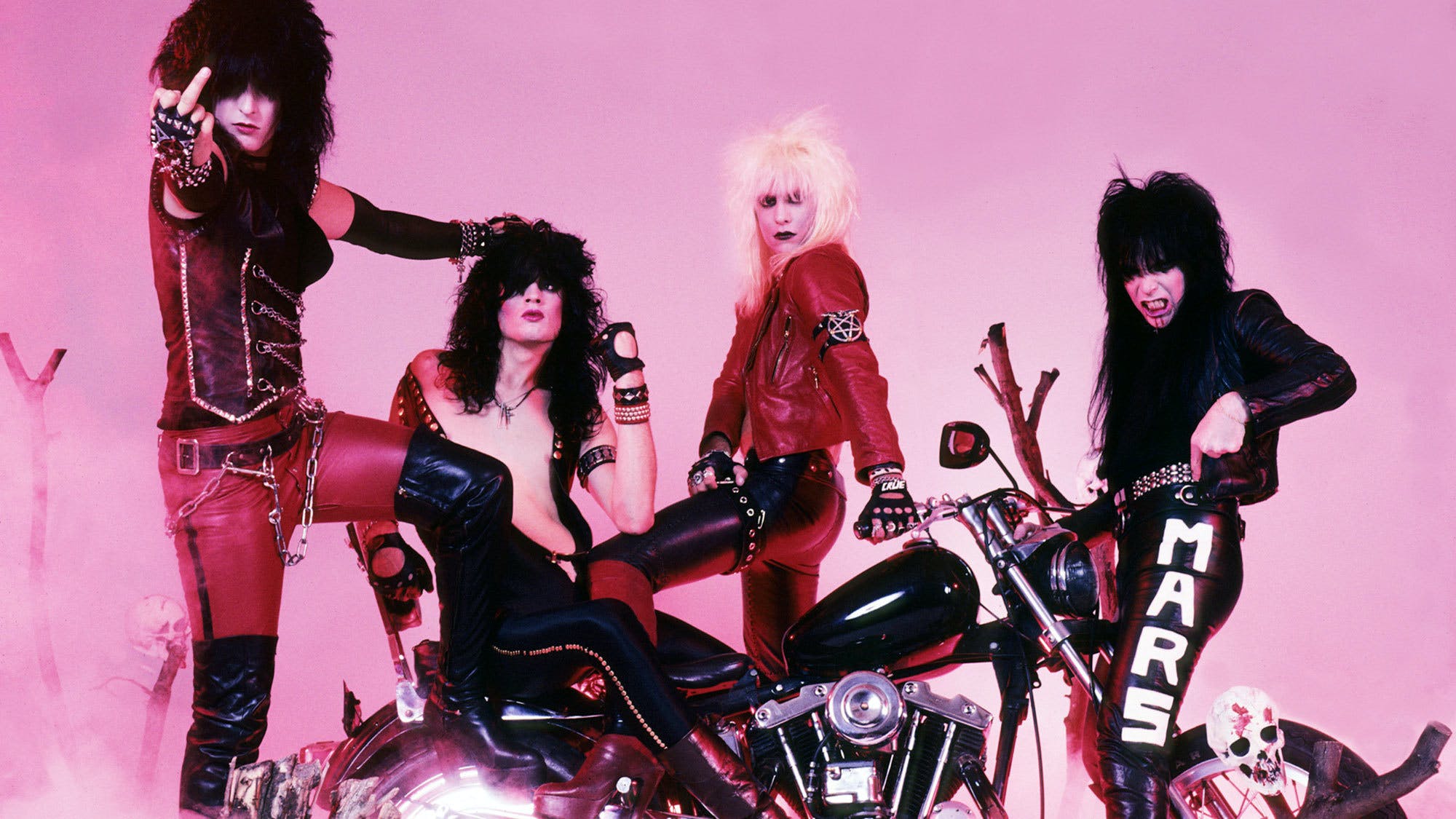 If Mötley Crüe biopic The Dirt shows us anything – and it often revels in the band’s unbolted rollercoaster of success, promiscuity, degradation and class-A drug use – it’s that the ‘rock star’, as we once understood the term, is dead. It’s not so much that the job description doesn’t fit anymore, it’s that today, nobody seems to want to apply.

The idea of rock stars as golden gods was first truly forged as a fantasy in the ’70s, carried over until 1981 when Mötley Crüe released Too Fast For Love, and continued on for at least a decade after. The unconquerable ego, heroic hedonism and sheer hubris of the characters in The Dirt – with the occasional exception of guitarist Mick Mars’ hilariously stoic disapproval – make for a stylish film about an unrepentant gang of idiots. But the gross spectacle of their consumption and disregard for even their closest friends is contained in the very first line: “The 1980s. The worst fucking decade in human history.”

The music business had long since needed wild stories to sustain the careers of its biggest stars between albums, and Mötley Crüe exceeded everyone from the Scorpions to Whitesnake and KISS. The songs sold an essentially romantic love like the classics. However, the decade demanded a sensational rock star image to match the aspirations of the era.

Bassist Nikki Sixx and drummer Tommy Lee first practised in Los Angeles in January 1981, the same month that Ronald Reagan took office as U.S. president. As the Republican leader during a distinct conservative shift in America, Reagan rallied his inauguration crowd with the promise of a national crusade to “make America great again”. The surge of hooting approval for the cowboy actor locked in a right-wing archetype of rugged individual success, which even left-leaning artists had to labour under. The idea of being a rock star became an aspirational and corporate fantasy; another act on sale from the stage, amplified by the salacious entertainment media waiting in the wings. The prize for success in any field was the ability to buy whatever you liked, and to do whatever you wanted with – or to – whomever you chose.

“Being a rock star is no longer about being a pisshead, or partying or being a rebel,” says Bring Me The Horizon frontman Oli Sykes, who has consigned his own days of hedonism to the past. “It’s more about standing up for something that you believe in and doing something different. It’s about being proud of that, pushing that forward and being inspiring. It’s a positive thing.”

A rock star hallmark used to be the belief in little more than your own invincibility, and The Dirt exposes the hole in the heart of that lie. A belief in something bigger, like the power of community, or the small but essential awareness of the effect of your music and your actions on fans as people, didn’t visibly develop until punk emerged as a response to the excess of rock. Punk created its own stars, but on first blush still traded on a destructive sense of nihilism that would take a while to arrive at the creative anti-consumerism of X-Ray Spex’ Poly Styrene, say, or The Clash’s Joe Strummer’s dictum that “without people, you’re nothing”.

“‘Rock star’ has that stigma that you’re crazy, you party hard, you’re with different women every night, trashing hotel rooms, treating interviewers like shit and you don’t care,” says Brendon Urie of Panic! At The Disco. “That seems like the rock star thing that came from the ’60s and ’70s. Maybe we can change the definition: ‘Do what you want creatively and hopefully that’ll make you a better person.’ Just be a decent person – you don’t have to be a dick.”

The rock stars in The Dirt don’t just admit to being dicks, but revel in their ability to maraud from city to city taking whatever they wanted – in Tommy Lee’s words, “drinking, snorting and fucking everything in sight”. Rock’n’roll has always stoked its own mythology, but now it’s reckoning with its often corrupt history. As an instructive example of just how much progress has been made, while promoting the movie recently, Nikki Sixx admitted to and apologised for fabricating an abhorrent rape story for the bestselling 2001 book. Even more damning is the climate that apparently lent such a tale some cachet.

What’s clear is that the impudence, vanity and brutal dismissal of others that played out across culture at large in the ’80s simply couldn’t go on unchecked. The money that protected rock stars from drug arrests, rape allegations and even the consequences of alcohol-fuelled deaths would move on to different styles, new artists, and a fresh awareness of what was right and what was wrong.

It’s unfair to judge yesterday’s game by today’s rules, but few people born this side of 1990 could play Girls, Girls, Girls or Ten Seconds To Love at serious volume and consider them a righteous expression of everything good that our music can do.

In the ’90s the progressive social consciousness of the American underground, found in bands as diverse as Bad Brains, the Minutemen and Fugazi rolled into ever-more outspoken groups like Bikini Kill, Babes In Toyland and Rage Against The Machine. These values coalesced in one person: Kurt Cobain, a new kind of rock star who ultimately did not want the job. Yet the Nirvana frontman became the figurehead that burned the old stars from the stage, and his remarks on Axl Rose – part of an MTV-fuelled media feud – framed the contrast perfectly. Kurt levelled allegations of misogyny, homophobia and egoism at the Guns N’ Roses vocalist, establishing a crack that would grow into a cultural canyon.

Kurt furthered rebellion in a way that hadn’t been seen before, according to Against Me! vocalist Laura Jane Grace. Just last month she reflected that he was “railing against record companies and not wanting to be a rock star, but at the same time, being a rock star.” It was an attitude that inspired a generation. “When you’re a kid, that was who you wanted to be,” she added. “I wanted to have my own Nirvana and change the world.”

But the world has changed even more extensively than Kurt could have ever imagined. In the mid-’90s the internet fundamentally altered not only the way that music was distributed, but the way in which stars and fans alike live their lives. Attention, once exclusively the preserve of stars, is now a product sold in the new digital economy and media is something that we make ourselves. With this has come a new kind of accountability – and the need to make peace with parts of music’s past.

“In 2019 I think a rock star is someone who’s willing to take a chance and stand up for what they believe in, maybe before anyone else believes in it,” says Sam Carter of Architects. “It’s someone who goes with their gut. In the alternative world especially, it’s scary to do that.”

Heavy music tries to express darker truths than the mainstream will admit. Artists can find themselves exposed, vulnerable, and in extreme cases ambushed by critics and individuals reviewing videos and lyrics for perceived evidence of misogyny, sexism, racism or oppression. Artists have taken the brunt for going with their gut. In 2017, Glassjaw released their third album Material Control, and the attendant publicity resulted in critical questions around apparent sexism in lines from their 2000 debut, Everything You Ever Wanted To Know About Silence.

Vocalist Daryl Palumbo was criticised for lyrics like ‘You can lead a whore to water / And you can bet she’ll drink and follow orders’ (Pretty Lush). But far from the defensiveness, arrogance and defiance of the old kind of star, Daryl’s response took ownership of his errors. “Those are some absurd things to say,” he explained. “The sentiment was frustration. I was a young guy, and I was supposed to be a man but I was not. I apologise for saying any of that.”

Daryl Palumbo’s attitude illustrated an acceptable way to move forward at a point when accusation and scrutiny are at an all-time high. Very few lyricists are writing songs like Mötley Crüe’s She Goes Down anymore. The revision of single lines could fuel an entirely subjective but never-ending carnival that misses the bigger, more positive change. Perhaps a corollary comes from Cosmopolitan Blood Loss, from Glassjaw’s second album Worship And Tribute: ‘We are the most impassioned ugly people’.

The questions of conscience, community and respect for others are arguably now being asked and answered by no band as effectively as recent Kerrang! cover stars, Bristol five-piece IDLES. Their songs show the figuring and the working out, with lyrics celebrating empathy in a way that few songs from the ’80s ever did. Their shows explode without pyro. Instead you might see tote bags printed with the words ‘Be the I in unity’, or regional Amnesty campaigns collecting money on behalf of refugees. In London, vocalist Joe Talbot introduces the song Samaritans as a song for “men, women, non-binary – whatever – for anyone who has feelings to share”. Sharing is caring, he says; sharing is baring.

Eventually the music collapses into noise as fans arrive onstage, climbing on each other’s shoulders in joy. Over the clamour the frontman’s hoarse voice roars ‘We’re halfway there’ from Bon Jovi’s Livin’ On A Prayer, still considered one of the best songs of the fractured, venal ‘80s. The crowd roar in response, more fans join and the din grows. Under the spotlight now, there is no distinction between band or fan. IDLES don’t profess to have the answers, just a will to ask questions. It may be the end of this particular show, but for the wider conversations, this is just the start.