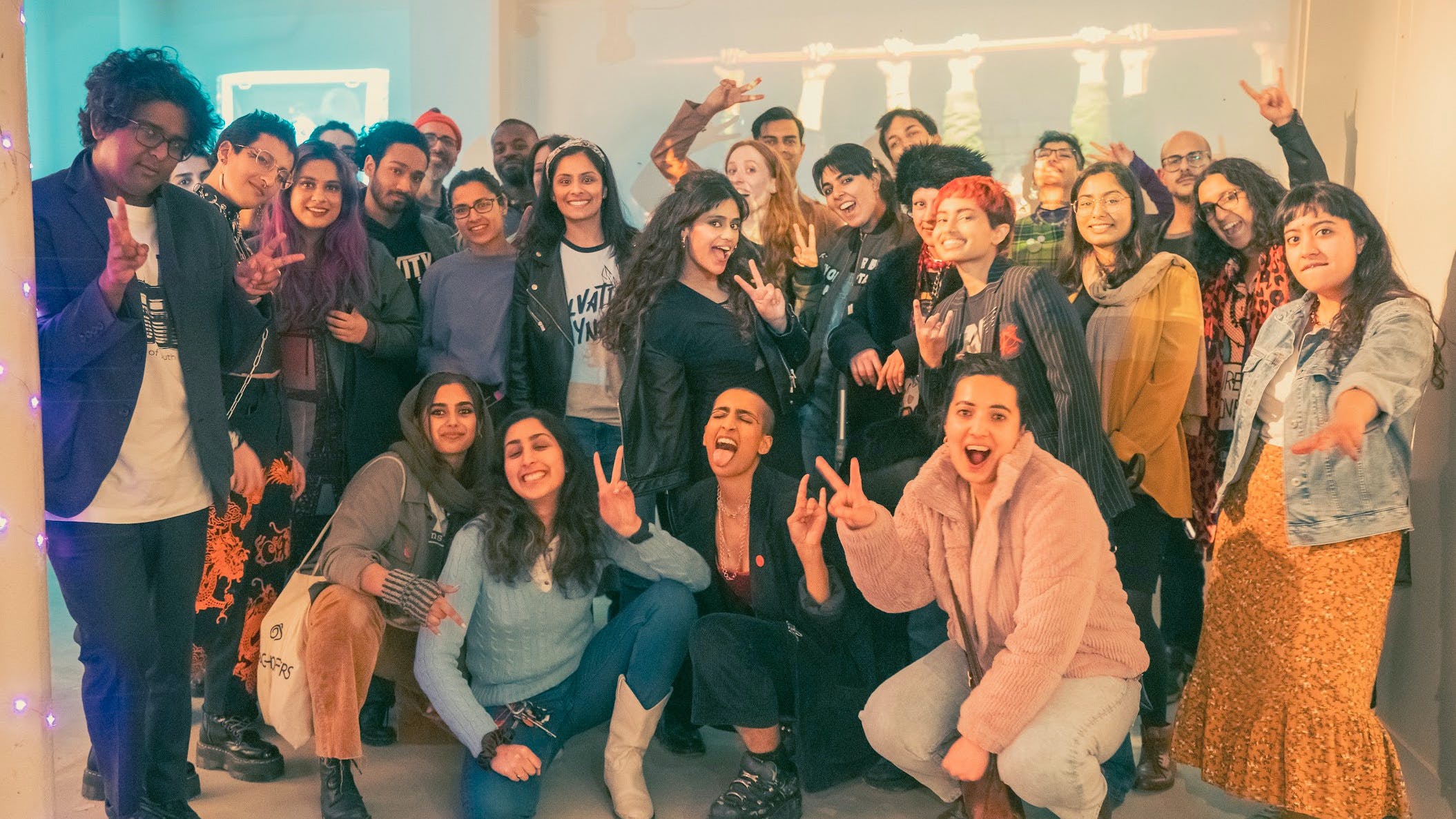 Naz Toorabally grew up on heavy music. She and her dad would listen to bands like Metallica and Papa Roach in the car when she was younger, but didn’t know many others who shared both her South Asian background and her love of rock. She came across publications like FEMZINE, gal-dem and Burnt Roti in Housmans Bookshop in London, and while she “thought that what they were all doing was really cool", Naz "still felt that people with my interests, or people who look like me, weren't being represented”.

In 2019, she decided to start her own zine called WEIRDO, made for, by, and about South Asians within the alternative scene.

“We're just South Asian people existing in a certain space. You don't always think about, 'How is this different for me because of my heritage and where I'm from?'” says Tayyaba, who works on WEIRDO’s events team.

After releasing their second issue, which featured interviews with Ashrita Kumar of Pinkshift, Billy Talent’s Ian D’sa and Laila Khan of Sonic Boom Six, WEIRDO expanded into a collective. They host events, including the two-year anniversary of their first issue at the Museum Of Youth Culture in London and an after-hours event at the Tate. “We had people in their 40s and 50s coming to our zine launch event,” Tayyaba says. “South Asian punks and goths have always been there.”

Below, we speak to the members of WEIRDO (some of whom prefer not to include their surname for privacy reasons) about what it's like creating a space for South Asians in the alternative community, and why it's so important.

What would you say is the goal for WEIRDO?
Naz (founder and Editor-In-Chief): “The goal for WEIRDO is mostly about building community and providing opportunities for other people. I did an interview recently on Worldwide FM with another collective called Daytimers, and we were talking about how sometimes [there’s] this idea that when you're part of a minority group trying to access a certain space, that it feels like there's only space for one person at a time to succeed in that particular creative outlet.

There's no unified South Asian alternative scene. Have you been able to create a space to join those different scenes and individuals?
Tayyaba (events team): “Part of the reason that I got into WEIRDO is because it's a space for anyone within any alternative scenes, that's a South Asian. You don't have to be in a band, you don't have to be an artist… I'm just a fan of alternative music, and I happen to be Brown. It’s nice to have that space as well, because a lot of opportunities that'd come up before it was always like, ‘Oh, we're looking for bands that have people of colour in them.’”

Rae Maxwell-Kavanagh (Discord moderator): “I went to one of the MCR concerts, because [I’ve been a] huge fan since forever, basically, and there were more Brown people than I thought. I was just sitting there going, ‘There's so many of us, but we never see each other, unless we make a really concerted effort to reach out.’”

Ascia (events team): “I actually drifted away from the alternative scene, because I felt very alienated and isolated… I listen to mainly hardcore music and there's a lack of people of colour in the scene – there's hardly any. I felt like there was a lot of covert racism as well in some of the alternative scenes.”

“I won a copy of the first zine. I was super excited. I was rushing to read the zine, and I could relate to what everyone was saying about feeling isolated or alienated in the scene. I was like, 'Finally, I've met my people!' And then I felt more comfortable going to shows again… Even within the collective, we've also gone out for dinners, and hung out. So it's just been really, really nice to do that. And it's amazing that finally, I get to be part of a community I've always wanted to be part of.”

How do you decide on the themes for each issue?
Naz: “The idea was to focus at home before expanding globally… The first issue focused on identity and community in British subculture. And the reason for that was whenever we talk about British subculture, we look at the punk and goth movements, and I never see Black or Brown people being represented in the archives. So part of what we're doing is documenting and celebrating South Asian people in these scenes. It just made sense to start in the UK, because that's where we're from, that's where it's founded.

"The second issue was called the music issue. I'm a musician myself. I was reflecting on the fact that a lot of the musicians that I look up to are often all white artists, and in terms of the alt. scene it's dominated by white men as well. There's nothing wrong with that, I love the bands that I love, but I was reflecting on that and thinking, ‘Where are the South Asian people?’ and they are there. The third issue that we're currently working on focuses on fashion and beauty.”

What has the experience of the Discord been like? Was there a specific purpose for it?
Rae: “It's almost like having a community board. People drop in and post little snippets of what they've been doing or art that they've been making, so it is really just trying to collect as many of our friends as we can. It feels like having a virtual chill-out room with people.”

Naz: “When we started it, it was just supposed to be this place where people can chat to each other. I think we had a couple of suggestions, one being that people wanted to use it as a space where they could book other artists or different creatives.

“People who aren't part of the South Asian community can also join the server, but they can only see a select few channels, one of those being ‘hire a creative’. So as the server grows, more and more creatives will be in the server, and people can pop in, and see if they can find a South Asian creative.”

Rae: “It would be nice to get the recognition based purely on our skills and not be seen as an afterthought. We're just people. We're just like you, we like the same stuff you like.”

Tayyaba: “I was always told growing up, ‘Oh, South Asians don't go to gigs…’ They were right! I went to a gig and I was the only one there, so it becomes a self-fulfilling prophecy. Whereas we're out there, and we're going, ‘No, South Asians do go to metal shows or punk shows,’ or, ‘They are involved in the alternative scene.’ It'll be great if someone goes, ‘Oh, I didn't know Asians could go to gigs. I'm going now.’”

Ascia: “I've always wanted to get into band photography, but when I used to go to shows, and I used to only ever see white people behind the scenes, I felt really intimidated by it. And when I joined WEIRDO, and I met a few people from bands, I approached them like, ‘Do you mind if I come take pictures?’ And they're like, ‘Yeah, sure, come.’ So it's given me a lot more confidence with it. Hopefully, I can pursue that going forward.”

Find out more about WEIRDO on their official website.