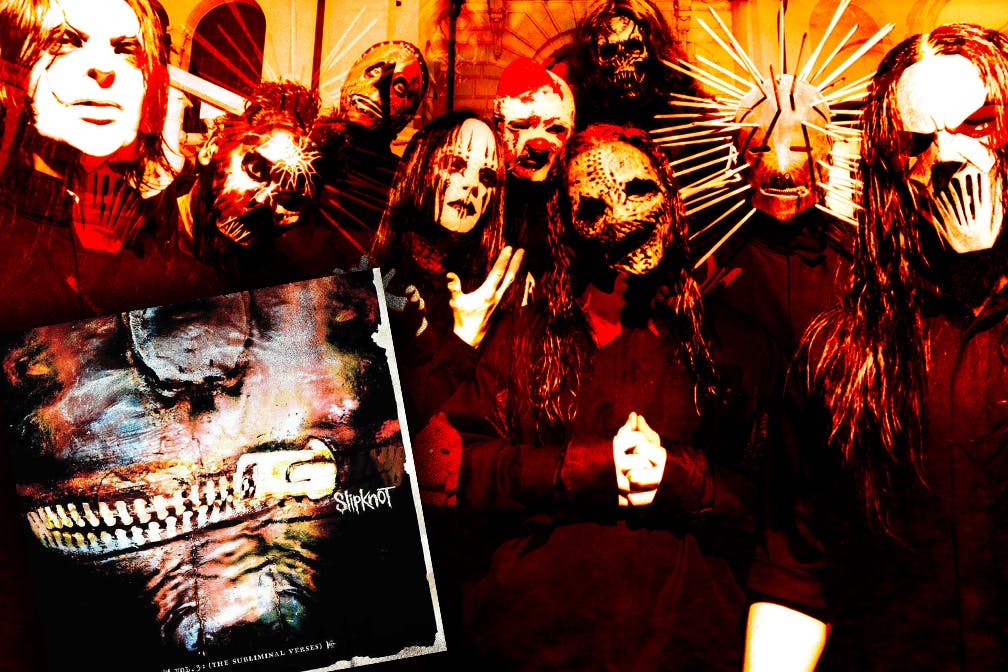 Furious self-belief, a seemingly unquenchable pool of energy and an unstoppable sense of momentum had driven the nine members of Slipknot from the streets of Des Moines to the very peak of the ’00s metal scene. Second album Iowa had topped the charts in the UK and hit Number 3 in the U.S. Billboard 200 – a stunning achievement for such a brutal and vitriolic piece of work. The accompanying tour cemented their reputation as one of the most dangerous, chaotic live acts around, but it also took its toll on the band.

“I’m dying. This is killing us,” Shawn Crahan, aka Clown, told Kerrang! back in 2001, as Iowa-fever engulfed the band. Frontman Corey Taylor later admitted that forces within the ’Knot’s camp had played their part in driving wedges between the members. “During the entire Iowa cycle there was so much crap going. By the end of the Iowa tour we couldn’t even look at each other, let alone talk to each other,” he said. “It was really sad. Here was this brotherhood that was so strong, and it was insane to think that an outside source can come in and push us apart.”

When the Iowa cycle spun to its end, Slipknot’s momentum did finally stall and many feared it might have been for good. The various members went their own ways and focused on individual projects. Corey and guitarist Jim Root disinterred their old band Stone Sour, drummer Joey Jordison birthed Murderdolls with vocalist Wednesday 13, Clown founded the experimental To My Surprise, and turntablist Sid Wilson went solo as DJ Starscream.

For the members involved, the experience compared favourably to life that had soured inside the increasingly out of control Slipknot machine. “We came very close to not making the third album,” Corey told us in 2004. “I didn’t know if I wanted to come back. I was having such a good time with Stone Sour, it reminded me what a band is supposed to be like. The thought of going back and being with Slipknot made me sick to my stomach.”

Another bombshell that rocked the band was Paul Gray’s arrest in June 2003. The bassist was involved in a minor crash with another vehicle, but when police were called to the scene, they found him in possession of marijuana, cocaine and drug paraphernalia. In their early days, Clown had loudly proclaimed that anyone caught doing drugs would be kicked out of the band. Commendably, though, they rallied around their bassist instead.

“It was a total fucking shock,” Corey recalled. “We’d all been pretty heavy drinkers, and a few people in the band dabbled with, let’s just say pharmaceuticals, but that was an alarm bell. We all closed ranks around Paul.”

Asked whether the bassist had a problem, the singer conceded that he had, and took part of the blame onto his own shoulders. “You have to realise that Jim and I were out on the road, Joey was off with Murderdolls, Shawn was out in LA working on To My Surprise,” he continued. “You have to look at the situation… Paul thought he was losing his band. I still live with a lot of fucking guilt about this, that whatever I did to try and heal myself might have had a bad effect on my brother.”

Slipknot would come back from greater adversity after Paul Gray’s tragic death in 2010 of course, but Vol. 3 was their first major challenge. They really had to pull themselves back from the brink, but even the process of making the album was far from plain sailing. The band were recording for the first time without uber-producer Ross Robinson (unless you count the limited-run 1996 release Mate. Feed. Kill. Repeat.).

Ross had taken a chance on the band and really helped them to capture that early chaos and threat, but they went for another big name in Rick Rubin, whose credits included Slayer, System Of A Down and a host of rock, metal and hip-hop acts. The band’s reactions to the bearded guru were mixed. In an interview with Revolver, Corey bemoaned the fact that Rick was rarely at the sessions. “We were being charged horrendous amounts of money. And for me, if you're going to produce something, you're fucking there. I don't care who you are,” he railed. In the same piece, Jim Root said that Rick Rubin had a presence even when he wasn’t there, and Clown labelled him a “guru”.

There were other issues during the recording, too. Jim was suffering from anxiety and Corey was drinking heavily. Oh, and they were also living in a haunted house for the duration.

Lots of artists have both recorded at and stayed in The Mansion, Rick Rubin’s 10-bedroom house and recording studio located in the Laurel Canyon area of Los Angeles. The Red Hot Chili Peppers and System Of A Down have both reported ghostly goings-on, and Slipknot had their own brushes with the uncanny while there. There was an area in the basement that Paul Gray found himself physically unable to enter, and Joey Jordison’s door would swing open at 9am every morning, no matter how he tried to jam it closed. “Only recently have I noticed the ethereal feel to the album,” Corey said on the eve of Vol. 3’s release. “And that’s definitely come from making it in that house. That house was so fucking haunted.”

Whatever the tribulations of the album’s conception and birth, Vol. 3: (The Subliminal Verses) was a triumph. “Far and away the most musically intense, creatively inspired and downright astonishing thing that the 18-legged chaos machine have produced to date, Vol.3… is, quite simply, a masterpiece,” gushed Kerrang!’s 5K-rated album review. It was also, importantly, a departure for the band. They’d harnessed melodic hooks before on the likes of Wait And Bleed and My Plague, but cuts like Duality and Before I Forget took the anthemic aspects to whole new levels of holler-along goodness. There were parasitic earworms aplenty, but the acoustic experimentation of Vermilion Pt. 2 was just as crucial a part of Slipknot’s evolution into a band that could do more than just rage and swear – as cathartically fun as that part has always been.

When Kerrang! joined the band on set for their classic Duality video – the one that saw them literally tear a fan’s house apart – Corey suggested that the time spent on their various side-projects had brought a fresh perspective to Slipknot. “Doing the side-projects definitely helped us all to break out of the box we were in,” he nodded. “We found a new courage on this record. It’s brutal but it’s melodic, it’s heavy but it grooves, it’s slow but it’s blast-beating fast, it’s got acoustic guitars but it’s got shredding solos.”

It wasn’t universally lauded. Change never is, and to some it was Slipknot’s ‘Black Album’ moment – a conscious transformation from a spitting, snarling force of nature into a more considered and accessible entity. There’s no doubt that the chaos was reined in somewhat, but Slipknot couldn’t have simply re-churned those first two albums, classics though they are, and retained the relevance and integrity. Vol. 3: (The Subliminal Verses) was the sound of a band starting to spread its wings, and it still sounds vital, vibrant and bloody furious.