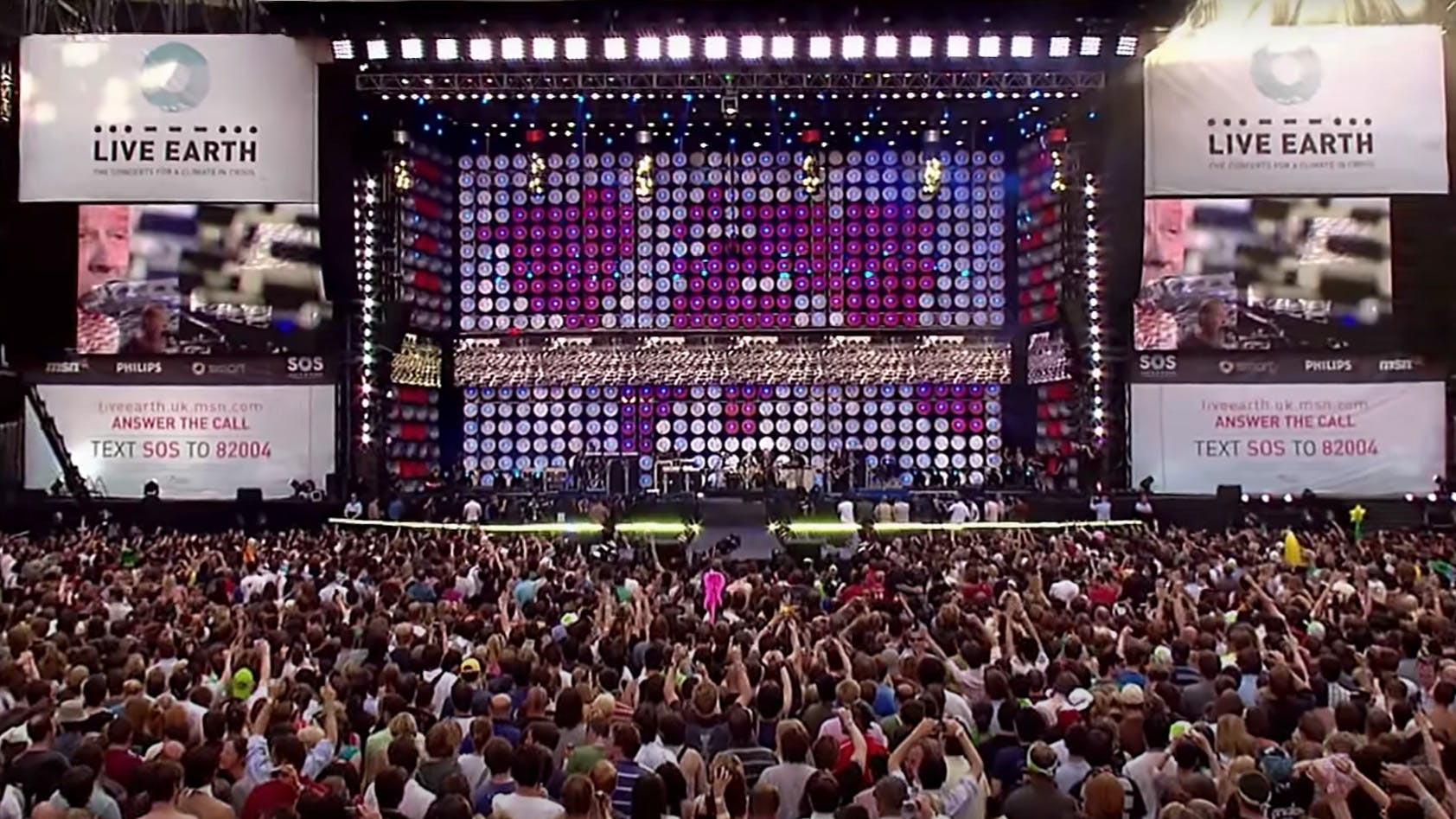 It’s a concerning fact that some people are still only now understanding the urgency of the climate crisis. Over the past few years awareness has grown, with credit going to the likes of David Attenborough’s documentaries, the activism of Greta Thunberg and millions of young people protesting in the streets as part of the climate strikes. At the same time, an increasing number of people, communities and wildlife have been struck by the negative effects of our altering climate – from extreme flooding to heatwaves. In 2022, the climate emergency is inescapable, and being felt everywhere.

You’d be forgiven for thinking the music community has only recently stirred into action on climate, with a range of artists – from Billie Eilish to Architects, Coldplay to Spiritbox – raising the profile of the issue, in their words and actions.

But if we rewind 15 years – a time when Greta Thunberg hadn’t even started school – to July 7, 2007, something extraordinary happened – arguably the most ambitious music event(s) the world has ever seen: Live Earth. It was all about raising awareness of a “climate in crisis”. Looking back, the scale of the project was mind-boggling. More than 150 artists played to hundreds of thousands of people during 24 hours of live music held in stadiums in 8 different cities: New York, London, Johannesburg, Rio de Janeiro, Shanghai, Tokyo, Sydney and Hamburg. Organisers went full Avengers in booking the biggest acts of the time. The line-up included – deep breath now – Foo Fighters, Metallica, Linkin Park, The Smashing Pumpkins, Pink Floyd’s Roger Waters, Rihanna, Beastie Boys, Madonna, Genesis, Red Hot Chili Peppers, Spinal Tap, Pharrell, MIA, Snoop Dogg, Shakira, Fall Out Boy, Bon Jovi, Alicia Keys, Kanye West and The Police. That’s just a few. There was even a broadcast from the spectacularly remote Rothera Research Center in Antarctica.

In 2007 general awareness and concern about the deadly consequences of human-created global heating was spiking – much of it credited to the Oscar-winning documentary, An Inconvenient Truth. Released in 2006, the movie followed former U.S. Vice President Al Gore’s attempts to educate people about the existential threat of climate breakdown. A full 15 years before the likes of Don’t Look Up, it shocked many into action. Indeed, Al Gore was an organiser and figurehead for Live Earth, with proceeds from the concerts going towards his organisation, The Alliance For Climate Protection. The former veep teamed up with producers Kevin Wall, Aaron Grosky and Lily Sobhani to pull it off with less than a year’s planning. Harvey Goldsmith, the British concert promoter famed for his work on Live Aid and Live 8, was a special advisor on the shows.

“The aim of Live Earth was to make people more aware of how we are polluting the atmosphere and that we need to do something to arrest the pollution,” Harvey tells Kerrang!. “The effect of the pollution is climate change; this also results in extremes of weather. The urgency was because of the work that Al Gore had encouraged.”

Writing in the event programme, Gore described the mission bluntly: “The Live Earth concerts represent the moment in history of our planet where everyone around the world is hearing the same unifying message at the same time – SOS. Answer the call.”

On the day of the gigs, messaging about the climate crisis was front and centre – quite literally in London at Wembley Stadium where calls to action were beamed across a digital screen running the width of the stage. A succession of A-List presenters – from Kevin Bacon to Cameron Diaz and Leonardo DiCaprio – were keen to state the event should be a wake up call, but also a “hopeful” celebration.

Concert-goers and viewers were urged to engage with the climate on many levels. They were encouraged to take some form of personal accountability, like “shopping for energy-efficient appliances” and conserving electricity at home. They were asked to spread word about the crisis, to write to their elected official or newspaper. Perhaps most substantially though, organisers asked people to add their name to a pledge on the Live Earth website; a framework that called for quicker and firmer action from governments – like banning the construction of any new coal-fired power plants that didn’t have the capability to trap and store their own CO2 output. As we know, all these years later, governments are still not taking the decisive measures needed to limit global warming.

The shows themselves were technologically ahead of the times, too – the electricity powering the gigs were from renewable sources, energy-saving lightbulbs were used on stage and the air travel of all the artists, crew and staff were offset through carbon credits.

With a bill that extensive, there were some memorable performances (and some less so, hello Damien Rice and David Gray doing Que Sera, Sera). In London, the show opened with a one-off collaboration between the “SOS All-Stars” – Foo Fighters’ Taylor Hawkins, Chad Smith from Red Hot Chili Peppers and Queen’s Roger Taylor – joined by a supporting cast of drummers.

Later in the day, a charged-up Metallica delivered a short set that included the thunderous Sad But True. The crowd – who also saw performances from Keane, The Pussycat Dolls and James Blunt that day – looked both bemused and enthralled.

For other artists, Live Earth was a career milestone. “It was the biggest crowd we had ever played to, both in the Giant's Stadium [New York] and across the world, so that was somewhat daunting,” AFI guitarist Jade Puget tells K!. “I remember being interviewed by Kurt Loder for MTV before our set, which was very cool because he's such a legend. Also, I was pretty excited to be able to say I played a show with The Police.”

The show in London concluded with Madonna – featuring an unexpected collaboration with Gogol Bordello – whose messaging was on point. “Let’s hope the concerts happening tonight all over the world aren’t just about entertainment,” said the pop icon, “but are about starting a revolution!”

Yet, despite all its star power, 15 years later and Live Earth feels somewhat buried in music history. At the time, in the UK, The Guardian described the show as a “ratings flop”, pointing out it was competing against sunny weather and Wimbledon tennis.

“We certainly made people more aware,” says Harvey Goldsmith. “I think we were too early to get a real result. We also, at the time, encountered too many environmental groups all claiming to have the solution. We also wanted to use the event to put pressure on the governments of the world to pay more attention to the problem. Subsequently they have of course.”

Through no fault of Live Earth, the climate emergency slipped down the agenda, and out of many people’s minds – the 2008 global financial crisis reordered global political priorities. Only now, with time running out on climate intervention, has that energy returned.

These days music’s response feels more grassroots – with the emergence of organisations like Climate Live and Music Declares Emergency. There’s tangible progress in all corners of the community, too – from greener live music events to eco-friendly NFTs.

“It was a big event with plenty of eyes on it across the world, but judging by where we are on climate change 15 years later, I wonder how many people really took the issue to heart,” reflects Jade Puget. “Calling attention to climate change is crucial and Live Earth was definitely ahead of the curve, I think it should have been done every year since!”

“This is the greatest challenge we have ever faced,” said Al Gore in 2007. It still is – and there’s still a need for action.