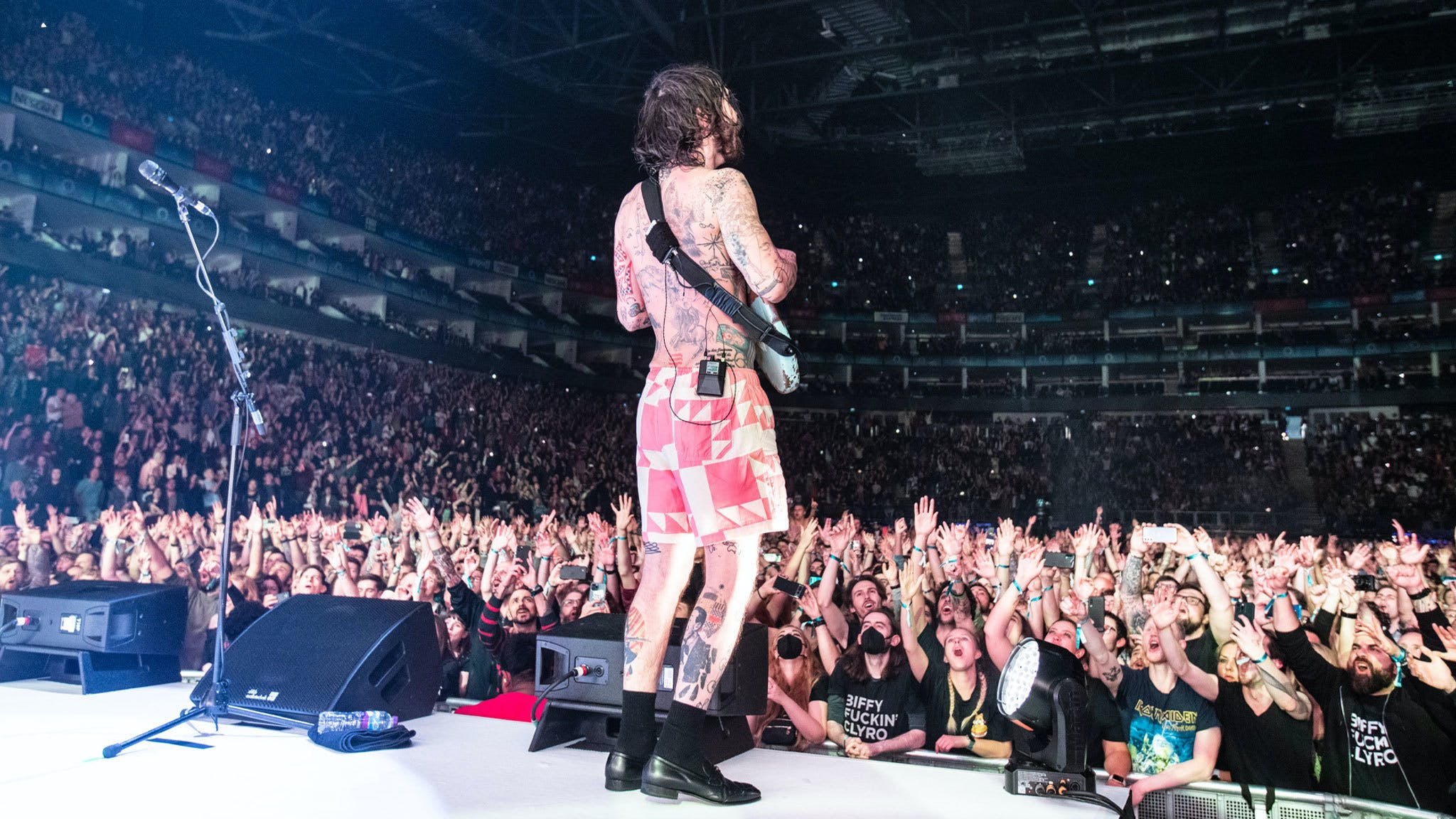 “It’s Saturday night,” says James Johnston, audibly surprised, as if the notion has only just occurred to Biffy Clyro’s bassist. “Who fucking knew? Let’s party. No work tomorrow.” As invitations to a good time go, it’s a simple and effective one. As deliveries of a good time go, however, it’s a fiendishly complicated and mesmeric one courtesy of Britain’s most consistently captivating rock band.

Architects are no slouches either, of course. They’re also no strangers to London’s larger spaces, having headlined Alexandra Palace as recently as May. This being a support slot, though, so ostensibly not their crowd, gives the Brighton metalcore heroes a chance to provide a compelling introduction for the uninitiated, though not necessarily a comprehensive one. Nine of tonight’s 10 tracks are from their last two albums, For Those That Wish To Exist and the classic symptoms of a broken spirit, both of which find their authors in a dramatic state of creative flux, embracing a sound more readily associated with venues of this magnitude.

Throw in a celebrity pal (comedian Joel Dommett) doing their introduction and the mobile-phones-in-the-air majesty of Butterflies, and you’ve got yourself one slick arena show. It particularly suits Sam Carter, whose evolution from prodigiously talented vocalist to galvanising frontman seems complete. Driven as he is to “set The O2 on fucking fire”, Sam is a more liberated presence onstage, continuing to deliver bleughs with aplomb but moving like a man unshackled and emboldened, encouraging everyone to introduce themselves to the people around them. It’s proof positive that whatever music Architects make, the consistent elements governing them remain quality and kindness.

What makes Biffy Clyro great is increasingly difficult to answer because there’s so much to love. The Kilmarnock titans now have nine studio albums to their name, all dense with ambitious, beautiful music – some of which leans into the mainstream, while much flails wildly away from it. Perfecting a live show that wrangles those many concerns, then, has become an ever more ambitious enterprise for Simon Neil, James and his brother Ben. They’re evidently equal to the task, though, as this latest iteration of their live show is the most extraordinary yet.

Opening track DumDum finds Biffy, including touring guitarist Mike Vennart and keyboardist Richard ‘Gambler’ Ingram, scattered across different levels of the vast stage, bathed in a red light that blends them with the incessant visuals, painted into their own canvas, indistinguishable from their art. Perhaps it’s a statement; maybe it’s not. Whatever the thinking, it’s an expert pairing of sound and vision that continues throughout.

The band are etched as figures from a fever dream during That Golden Rule, and replicated as innumerable tiles during Glitter And Trauma, overloading the senses in the same way the music can – caressing and cajoling from all sides. This means the moments of refinement, such as Simon swinging a bulb over his head before Who’s Got A Match? or lying on his back filming his own face during Unknown Male 01, have even greater impact because they’re breaks from the wider spectacle. And then there are the more intimate songs – Mountains, God & Satan and Many Of Horror – augmented by two sequin jacket-wearing violinists, which rupture hearts the same way they always have.

Much like Architects’ performance, Biffy focus more squarely on a certain part of their career, namely from 2007’s Puzzle to the present day, with only two tracks from 24 venturing any further back. That means the inclusion of 57, from debut album Blackened Sky, is met with sporadic recognition, suggesting there’s a large contingent tonight for whom the band’s early days are a hazier proposition.

That’s a shame because 57 is one of the evening’s highlights, a song on which all three members contribute their voices, loud and true, anchoring them back to their past to provide a powerful reminder, if one were needed, of how impossible this career trajectory must have seemed in those early days. Then, just as now, shows would end with Simon screaming an immortal sign off that emphatically identifies the name of the band who’ve just blown minds. “WE ARE BIFFY FUCKING CLYRO.” They’re words we’ll never tire of hearing.