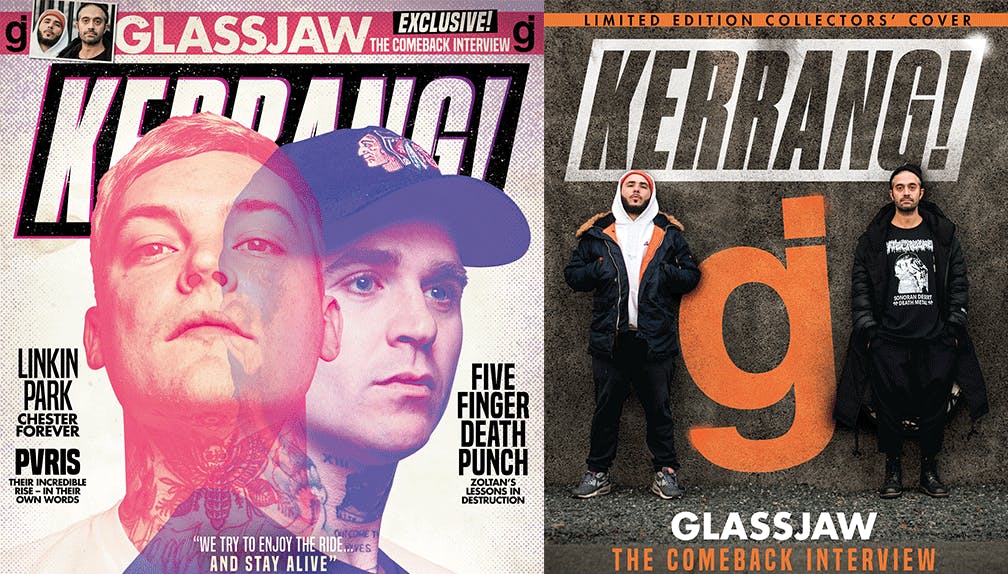 This week we've got two covers to share for you.

First, headlining the Kerrang! Tour this week marks a celebratory end to The Amity Affliction's 2017. The past 12 months has brought highs and lows, triumphs and tragedies, but they're ending it stronger than ever. Kerrang! followed Ahren Stringer and Joel Birch through it all…

Check out the cover:

We've also made a special limited edition cover to celebrate the Glassjaw's comeback. This super-exclusive variant can only be purchased online through our friends at Newsstand. There's a very limited number of these available and they will not be in shops.

Elsewhere in the issue, PVRIS reflect on a string of triumphant UK shows, which saw them sell out London's O2 Academy Brixton. Gene Simmons from that tiny little band called KISS takes us inside his whirlwind mind, Zoltan Bathory looks back on a decade of destruction with Five Finger Death Punch, and Chester Bennington's spirit gets immortalised on Linkin Park's emotional live album.

Also in the mag, Panic! At The Disco deliver a brand-new live record (even though what we'd really like is the Death Of A Bachelor follow-up...), and Avenged Sevenfold expand last year's The Stage with mixed results. After that, Enter Shikari annihilate Ally Pally, while Every Time I Die make a racket in Camden, and Royal Blood play not one, not two but three ridiculously huge shows.

The Readers' Poll is back, too, and we want you to tell us about your 2017. Click here to take part.

Of course, it wouldn't be Kerrang! without some badass posters. This week we've got shots of Jimmy Eat World, Milk Teeth, Slipknot, Avenged Sevenfold, Creeper and AC/DC.

Get your hands on the Amity cover from shops and this link on Wednesday, December 6.

And don't forget, our limited edition Glassjaw cover is available only from Newsstand on the same date right here.

Sad Summer Festival returns with Taking Back Sunday, The Maine, PVRIS and more

Taking Back Sunday will headline this year’s travelling Sad Summer Festival – with special guests on select dates including L.S. Dunes and Head Automatica.

Maggie Lindemann and Charlotte Sands to support PVRIS next year

PVRIS have announced that they’ll be joined by Maggie Lindemann and Charlotte Sands for their upcoming UK and European tour.

PVRIS: “There’s this push and pull between doom and joy, hate and love…”

As PVRIS return with two new singles and a new home at Hopeless Records, Lyndsey Gunnulfsen reflects on 12 months away from the limelight, and how taking the time to reflect has created a “dynamic” and “versatile” new era…

PVRIS announce signing to Hopeless by dropping two new singles – ANYWHERE BUT HERE and ANIMAL – and an accompanying short film.