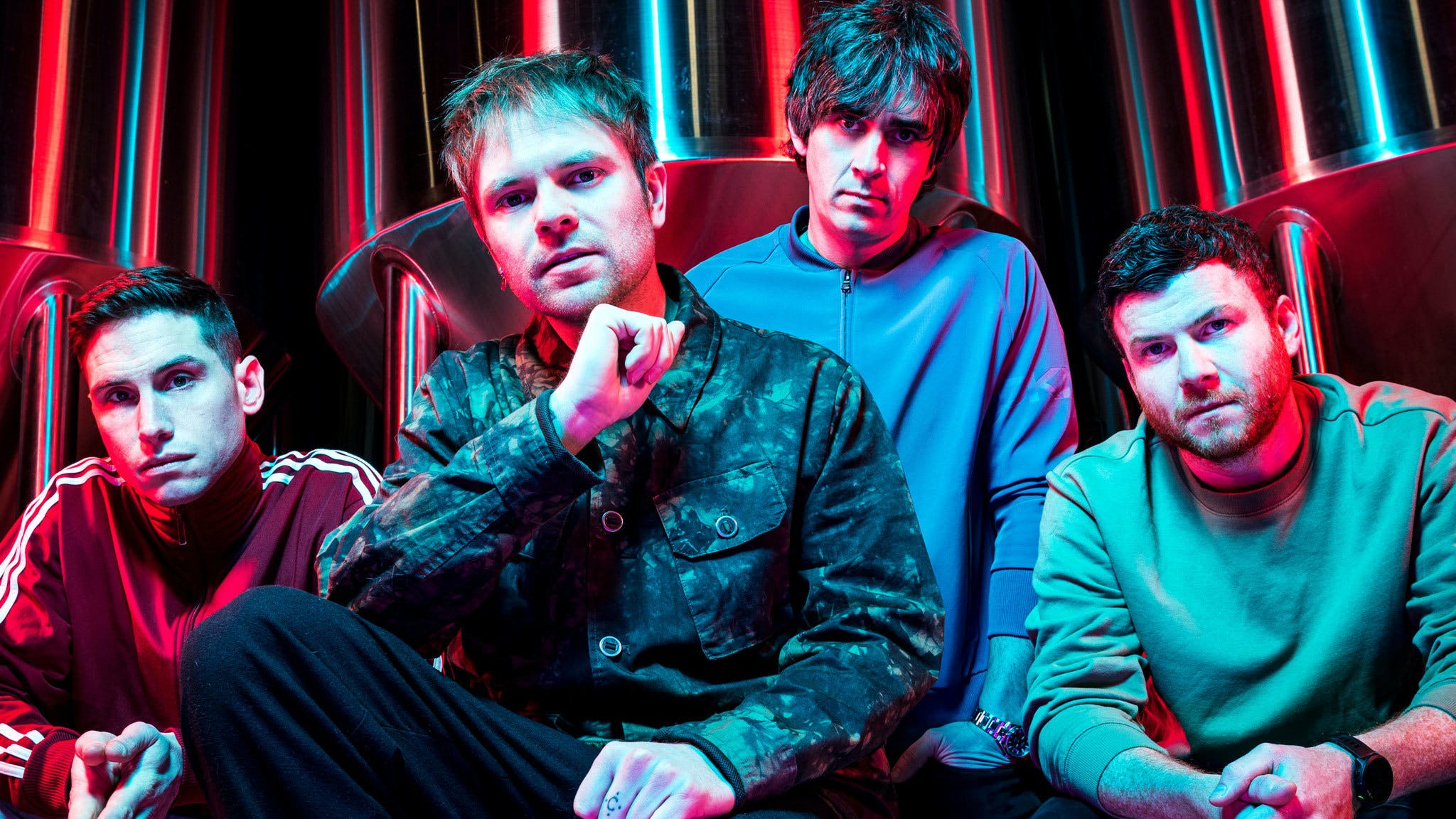 Enter Shikari are back! Not only have they returned in typically triumphant fashion with their first new music since 2020’s brilliant Nothing Is True & Everything Is Possible album, but they’ve made it a collaboration with one of the coolest young bands in the scene, WARGASM.

Here, frontman Rou Reynolds tells Kerrang! how it all came to be, the important – and very Shikari – message behind The Void Stares Back, and what else we can expect from the band by way of new music…

Following Nothing Is True… and the pandemic, you said you were struggling to write new music. When did you realise you could do it again?
“I guess it was pretty gradual. Download Pilot felt like if there was going to be a turning point then that was going to be it, it was such a euphoric day, being able to connect with people in this way again. It was a shock to the system that this ‘you’ does exist, this version of you hasn’t gone away, this version of your life hasn’t gone away, it’s just been dormant. That side of me hadn’t been coaxed out of the shell for a while. Bits and ideas started to come from then onwards. It wasn’t a Hollywood-esque thing where I woke up with a waterfall of ideas, it was edging forward, and slowly things started to flow and songs started to appear and excitement came back.”

The majority of your last album was recorded outside of a conventional studio – either all working remotely or in your home set-up. Was it the same this time?
“We had a month down in Chichester in an old farmhouse in the middle of nowhere, but most of the track was done by that point. It was done at my house with the guys coming round. It’s a heavily-produced track; I really wanted to push myself as a producer so there’s a lot of different textures and digital hours and a lot of work that went into it in that respect. There was never all four of us jamming it out in a room, it was very much sculpting it bit by bit in my room behind a computer.”

Even from the beginning there are heavy effects on the vocals. What was driving this much more ‘produced’ sound?
“The fact that it was just one track we were working on. I wasn’t weighed down with a full album of stuff to do, I was dipping my toe into the water, and it enabled more detail and concentration on small stuff like that. It was a sense of freedom and having the time to really delve in. After the success of Nothing Is True… in terms of the production of it, I wanted to push myself further and not be afraid to use the techniques and skills I’d learned for vocals as well. It’s about not trying to think of things in rigid instrumentation – the vocal cords are just a way of making sounds and they don’t have to be au naturel all the time, it’s just an interesting way of opening a song when people expect to hear the voice that they’re comfortable with and have known all these years, and it opens with quite a warped voice. It puts people in an interesting frame of mind for the rest of the song.”

What is the meaning behind the track?
“I wanted to write a track about the war that’s as old as time itself: conservative ideas that want things to stay the way they are [against] progressive ideas that need to push things forward. I mean this in a really broad way – like the way we think about sexuality and gender has changed so much, even in the last five years, really. In other areas of life like economics, in music and fashion, the alternative has always been dismissed, and now there’s an obvious divide in society where the people who are pushing the more progressive way of looking at things, the more archaicly-led, conservative, conventionally-minded people look at these new, progressives and see someone from another dimension. They see someone who is so far from the way they think and is so peculiar and odd – almost scary. I wanted to write a track that was embracing the otherness in the same way that throughout history the oppressed people have taken the character or names that they’ve been called and taken control of them, and I thought it would be quite interesting to present ourselves as being alien in effect. That’s really what it feels like to those people who hold more conservative ideas.”

Do you think that we can convince the more conservative generation to change?
“I don’t think we have the time, so the older, more conservative mindsets have to be persuaded or discarded! When you take things like climate change, for instance, we don’t have the time. [We need] alternative ways of producing energy and of organising society. There isn’t time so we have to do all we can to persuade, and if we can’t persuade then beat (laughs).”

How did you get involved with WARGASM?
“I already thought they’d be a cool band to work with – we knew Sam from Dead! anyway, we played a few shows with them a while back, we met Milkie once or twice as well, and they seemed like really good people making interesting, exciting music. This track, as soon as I made the first demo, I had them in mind. When I was thinking about the lyrics and theme and everything I was just talking about, it was after [an awards show] where Milkie’s dress got the livestream shut down and I found it really interesting where it brought up the conversations again of the patriarchy and the way we have an expectation of a woman in a band to act a certain way. People see Milkie and see the way she dresses or acts, and think she’s different and not acceptable and, ‘How dare she be wearing these things!’ I thought that really fitted into the idea of the song and people thinking that younger people with their ‘flamboyant, unconventional ways’ are from another dimension.

“I presented the track to them and it came together quite quickly after that. Sam sent across a load of ideas. By that point I didn’t have the opening line ‘The void stares back’, that was one of the vocals he sent over, and I went into it and effected it. It came together really quickly and it injected such an excitement into the track and it boosted it over the line.”

Can we expect more collabs from Shikari in the future?
“It’s never been something we’ve really considered. Because there’s such variety within the music we make anyway, it’s not something I’ve felt pressured to do or need to do. Couple that with the fact that writing music with other people used to terrify me – and I’m still not massively comfortable in a room with other people making music – but over the last few years, all the pop writing I’ve experimented with and writing camps and doing stuff outside of Shikari, that’s built up my confidence a bit and I feel more able to approach people now. There are a few in the pipeline that we’re working on at the moment, but I don’t know if any of them will work or come out.”

Is this new track a signpost for what Shikari will sound like going forward?
“As always it’s hard to tell (laughs). Perhaps in the production. Because of my background and quite original background – not many people in rock production learned most of their craft through drum’n’bass production, for instance. Not many people have the diverse range of musical influences and production influences, so there’s a whole palette and world of opportunity for Shikari, but more so with more confidence that we gain. In terms of production that’s something I want to follow on to the new album, but it’s too early to tell.”

Will we hear more new Shikari music this year?
“We’ve got a couple of tracks on the go and ideally another one this year. At the moment it’s heads down and working on what we’ve got, as well as getting ready for Reading & Leeds. Hopefully there will be more music to follow.”

What can we expect from your Reading & Leeds set?
“We’re still formulating the setlist at the moment. We’ve got to cram as much as we can into 45 or 50 minutes, so it’s going to be an action-packed set for sure. There are going to be some surprises in our set and in other people’s sets, but that’s all I can say…”

The Void Stares Back featuring WARGASM is out now. Enter Shikari play Reading & Leeds at the end of the month.