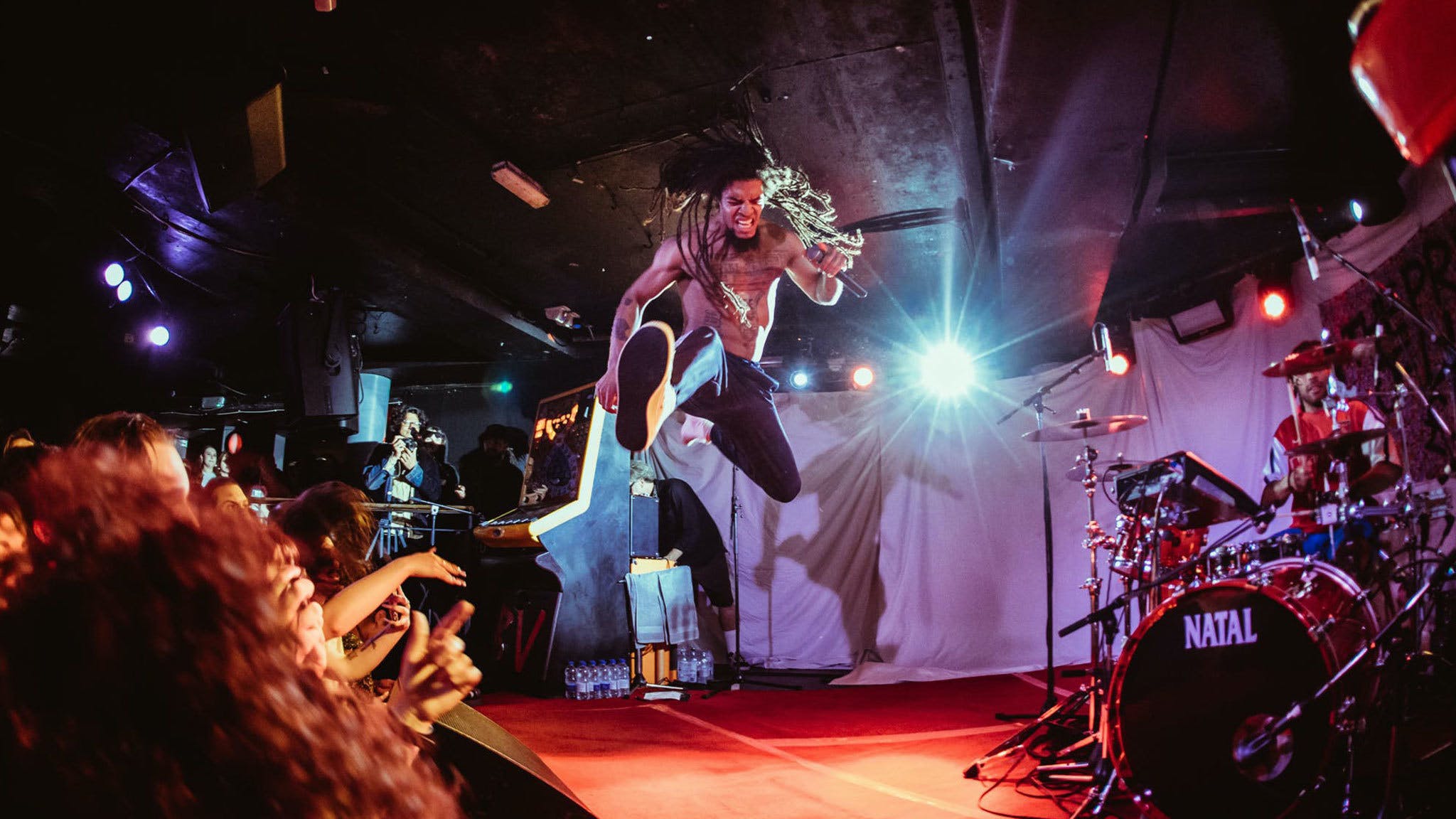 Bob Vylan were never meant to get this far. A pair of musical outlaws who emerged, mysteriously, from London’s underground with fire in their bellies and revolution on their minds, not only did they inhabit a grime-punk hinterland in which few others had found meaningful success, but their provocative politics – delivered with intimate, uncensored conviction, often calling for violence to meet violence – were the very antithesis of the beige modern mainstream. Hell, even the members’ taken names Bobby Vylan (vocals/guitar) and Bobbie Vylan (drums) seemed like the eccentricities of a resolutely cult concern.

And still, their superb second album Bob Vylan Presents The Price Of Life landed at Number 18 on the UK Albums Chart, Number Four in physical sales and Number Three in downloads – with no outside assistance.

“It’s incredible,” grins the singer. “Like, what have we been able to do?! Some people are saying they wish that we had gotten into the Top 10 – and we wish we had gotten Number One – but when you look at what we were up against, at how the deck was so stacked against us, we truly should not have been there. And yet there we were, proving that it is possible.”

The drummer smiles a wide, infectious smile. “The only way I can describe it is pride – a pride that you don’t often have. In a lot of cases these are billion-pound companies. Ours is not a billion-pound operation…”

The victory is all the more poignant given the central theme of …The Price Of Life. Where breakout 2020 debut We Live Here was a blast of rage against a landscape of socio-political unease, peppered with evocatively-titled bangers like Pulled Pork and Lynch Your Leaders, its follow-up plays like a manifesto for change. Its lyrics more purposefully unpick wealth inequality with sharp ideas and blunt language. There are incendiary shots fired in the likes of Take That and Pretty Songs, of course, but also dark reflections on dirty dealings (Big Man), calls for self-care (Health Is Wealth), and even an opening sample of great Guyanese activist and academic Walter Rodney (Walter Speaks).

These aren’t just reactions to the problems we face, but also well-read, big-picture road maps for how to start tackling them. Ownership and independence are key, and the need to engage with detailed economic realities should begin in bands’ everyday.

“There’s such an entitlement in the rock world,” reckons the singer. “A lot of rock bands don’t have any graft. They don’t have any hustle, because a lot of them have never had to struggle for anything in their lives. People just want the easy way: ‘What’s the deal? Where’s the deal? Okay, gimme the deal!’ They don’t want to stick it out for four or five years to see where they can get off of their own back. Whereas, if you look at the music that’s dominating the charts – rap music, or ‘black’ music – it’s much more common that those musicians [have had to fight]. We met a young boy recently who told us, ‘I just care about the music. I don’t care about the money.’ We told him that was his first problem. You need to care about the money, because that’s what allows you to keep making music!”

That’s not to say you can’t burn a little currency when the time is right. Ask the pair for their favourite memory from this album process and chances are they’ll point to the moment the band became their full-time job. A close second, however, was the day (and night) they spent wielding makeshift flame-throwers out in Jamaica. When it came to plotting the video for launch single Wicked & Bad – a summertime smasher heavily influenced by jungle music, with its roots in reggae and dancehall – the Caribbean island paradise was the obvious setting. But that’d be an impossible stretch for a self-financed underground act just coming out of a pandemic, right? Not when these lads put their minds to it.

“I’m quite on it with the new reggae artists,” explains the singer, “so I began to look at who shoots their videos. I found Yannick [Reid], who does stuff with Koffee, Protoje and Lila Ike. I just dropped him an email to ask if he’d be up for it, how much it’d be, and how we’d [pull it off], essentially. He and his team helped a lot. We were like, ‘Let’s just fuckin’ do it. We deserve this!’ It was my childhood dream come true – it was bucket-list stuff!”

“And we don’t owe anyone any money for it…” interjects the drummer, proudly.

“It’s not just the question of owing somebody money, but how much we would’ve owed them,” the singer stresses. “For what we were able to do on a [shoestring], the label could’ve run up triple the budget. One of the dumbest things I’ve heard come out of an artist’s mouth is, ‘The label is gonna pay for it.’ No, you’re gonna pay for it. The label has your budget. It’s still your debt. It’s like someone saying they’re going to uni but the Student Loans Company are going to pay!”

Of course, the vast majority of self-management is less glamorous than jet-setting off to tropical islands.

“It’s the living, breathing, sleeping emails,” explains Bobby. “People see us signing records all night and driving them to our fulfilment centre in Coventry on social media and think, ‘That’s the graft. That’s the hustle.’ It’s just moving, moving, moving. But there’s so much that’s not moving. It’s just being sat still writing and answering emails. When I’m done with this interview, I’ll probably do an hour of customer service, then I’ll go to the gym, then I’ll come back and work on some actual music. Then I’ll send some more emails later on! If we don’t send those emails and get out on tour, we’ll be out on our arses.”

Having already expanded Team Vylan to include their manager Molly, though, as well as a permanent sound engineer, their tech specialist and a photographer, isn’t there a temptation to hire some admin support?

“I guess this could be our advert in Kerrang!,” the singer teases. “If you would like to apply to be an assistant Vylan, just drop us a line!”

Every real political punk knows that you can’t win converts without making a few enemies along the way. With lyrics about killing the Queen, digging up the corpse of Margaret Thatcher, and chucking statues of Winston Churchill into the sea, it’s safe to say Bob Vylan have ruffled more than a few feathers thus far, but they feel no need to tone down their perceived ‘extremity’ to make the next step up.

“I don’t think [our music is extreme],” says Bobbie. “If I said a lot of the things that we say in these songs to my friends, they wouldn’t bat an eyelid. If change isn’t going to happen through someone else helping you, or if it’s not going to happen ‘the correct way’, then you’ve just got to make it happen. I don’t consider that extreme. It’s just getting things done.”

“Rock musicians – punk musicians in particular, or what is now classified as punk – have just been lured into this pacified state of existence,” continues the singer. “If we’re able to say what we say on this new album and have it get to Number 18 without [watering] anything down, then we can get it to Number One. Where people are like, ‘If you would just tone it down, you could get to here…’ we’re like, ‘Nah. We’re just 17 steps away. That’s nothing!’”

As the stages become more elevated, though, doesn’t the danger of inflaming a damaging, possibly violent, backlash grow with them, too?

“If you believe what you said, you should be able to say it anywhere. If you feel like you can’t say something on an elevated platform, you probably shouldn’t have said it in the first place,” answers the drummer, boldly.

The singer pauses a moment, having grappled with the conundrum before.

“I mean, some people wouldn’t like us if we kept our mouths shut. But saying the things that we’re saying on [more prominent] stages, there is a part of me that thinks all our tour dates are posted up there. People know exactly where we are and what time we’re coming on. That’s a little unnerving. I’ve got family, and my main mission in life has been to make it home free, and to make it home in one piece, for a very long time. But it’s not a crippling worry in as much as me not wanting to go onstage.”

“The most important thing is proving that you don’t have to pull your punches as an artist,” Bobby hammers the point home. “You can make the music that you want to make. And you can compete with these massive companies. It’s possible. It’s all possible.”

“Hopefully this album can [point] people in the right direction: somewhere to look, something to think about. If we’re all aiming towards [positive change], it becomes easier for everyone.”

Anger is their energy, so as we sign off we can’t help but wonder whether they really meant a recent tweet: ‘You think I wanna be out here screaming about racism and chanting down white supremacy in every song? I wanna sing songs about nothing like all those nerdy indie bands…’?

“I really do,” the singer smiles, ruefully. “It’s just not [our calling]. For us to make music and not try to address those things that affect our lives would just feel wrong, but I wish I could make songs about the more beautiful things in life. I wish that we could have a Top 20 album full of songs about love, just companionship and relationships, like so many of those other bands get to do. Imagine just writing songs about going to the pub with your friends. That would be sick!”

This article was originally printed in the May 2022 issue of Kerrang!.

“You don’t understand how proud my family are gonna be…” said a semi-speechless Bobby Vylan of the duo picking up the first-ever rock award at the MOBOs.