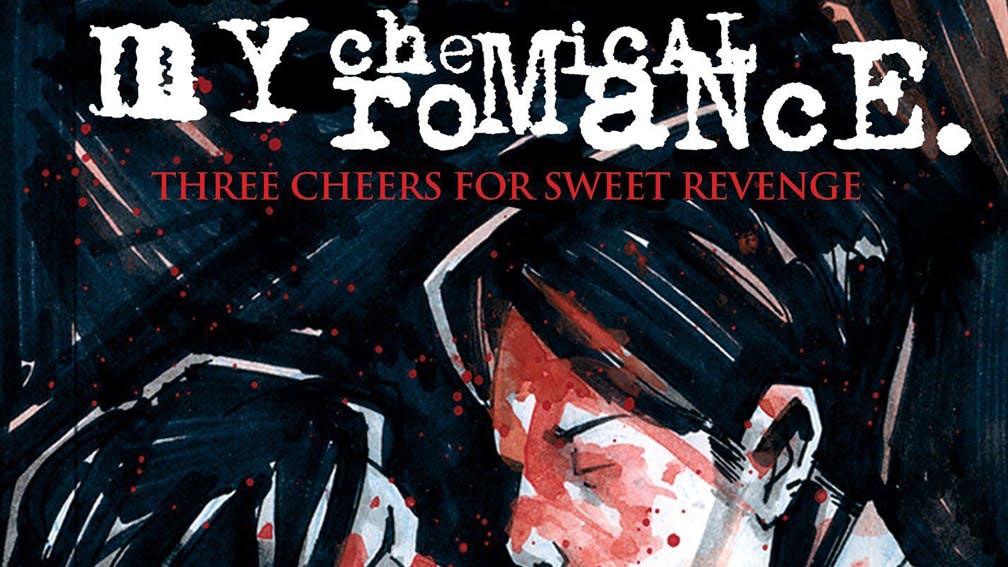 This is the original Kerrang! review of Three Cheers For Sweet Revenge from 2004.

Love and death: sometimes intertwined, often pitted against each other; the two central tenets of 19th century Romantic poetry and horror B-movies of the 1950s. Two backgrounds from which New Jersey rising screamo stars My Chemical Romance draw upon heavily on this highly-anticipated second album – available on import now ahead of its official UK release in September. Like AFI and Alkaline Trio before them, My Chemical Romance are punks with a fascination for all things gothic.

Led by charismatic Christina Ricci-look-alike Gerard Way and named after Irvine ‘Trainspotting’ Welsh’s book Ecstasy: Three Tales Of Chemical Romance, these black-clad upstarts have, with TCFSR perhaps created the perfect antidote to all the mindless feel-good ‘hits’ that will be foisted on us all summer. A loose concept album of sorts following (you guessed it) a doomed love affair with forays into the supernatural, TCFSR builds on the grit and heartache of their debut, released on Thursday’s Geoff Rickly’s label, and is a noticeably more upbeat, polished and uplifting album. Thankfully, though, MCR have done anything but go soft on this first major label outing, and their manic, juddering vocals, jagged guitars and grandiose choruses are all in place here.

The fivesome’s flair for dabbling in the sonically flamboyant is also neatly indulged: just check the jaunty mobster swagger of You Know What They Do To Guys Like Us In Prison or the Spaghetti Western intro to Hang ’Em High. Mostly, however, what we have here is screamo punk aggression of the most passionate order. Lyrically, Gerard is far from a happy bunny, but as on his band’s debut he’s clearly having fun piling on the B-movie imagery (‘I took a train outta New Orleans and they shot me full of Ephedrine / This is how we like to do it on the murder scene,’ he wails on Give ’Em Hell, Kid).

And though TCFSR doesn’t quite set MCR apart from today’s screamo crop (it sits rather comfortably between releases from AFI and Avenged Sevenfold), it’s nevertheless a fine, thrilling mix of sounds and ideas from a band with the potential to go deep and far.