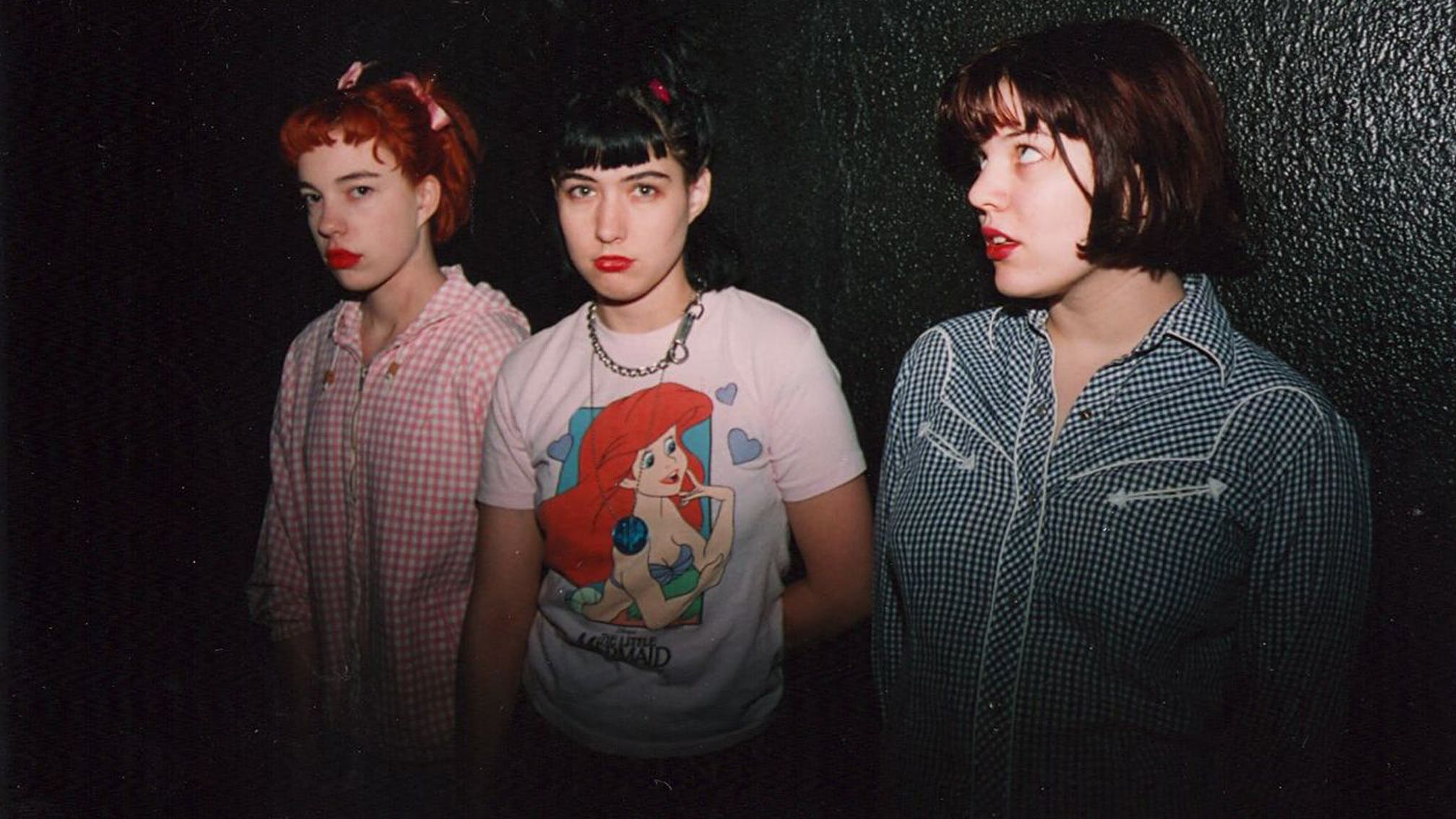 In 2016, in a field flanked by the Chicago skyline, The Julie Ruin momentarily went quiet. The New York quintet were at Riot Fest promoting their second full-length, Hit Reset. Then it happened: a single, marching drumbeat rang out, greeted by an instant wave of recognition. The woman next to me turned to her girlfriend. “Oh my god. They’re going to do it. They’re really going to do it,” she gasped. My friend grabbed my arm and dug her nails in harder than she’d meant to. I didn’t even care. I was about to hear Bikini Kill’s iconic Rebel Girl performed live for the first time in my life. It would be the first time for most of us.

Apparently aware of the wave of anticipation in the crowd — the sheer adoration for her former band was palpable — frontwoman Kathleen Hanna got distracted and sang the wrong lyrics to the first verse. The band kept playing. “I fucked up,” she said to bassist and longtime collaborator Kathi Wilcox, over the music. “I can’t believe I fucked that up.” Then Kathleen shrugged, went straight into the chorus and acted like nothing had happened. It didn’t matter to the audience. Bikini Kill was never supposed to be flawless anyway. So, there in that field, in the afternoon sun, we danced and we sang and most of us wept; an entire field of women who’d been raised by Kathleen and all of the other riot grrrls we still adored more than two decades later.

At 13, there’s only so much you can know. In 1992, I already knew the world was going to be less kind to me than it would be to boys. I knew that my body was under much closer scrutiny. I knew I was supposed to be scared to walk alone after dark. I knew that if I wanted to play in a band, I would be made fun of. I knew that when I listened to Babes In Toyland and PJ Harvey and L7 and Hole, those snarling beacons of womanhood were essentially passing me a handbook about What I Had Coming. I embraced it with a sense that was equal parts fear and fury. But the lights didn’t really come on, the room wasn’t truly illuminated, until I heard Bikini Kill.

One night on Radio 1, there was a feature about Huggy Bear, a riot grrrl band from Brighton, taking the underground by storm. Their music was too raw, too unhinged, even for me. But Huggy Bear had brought an American band named Bikini Kill on tour with them and when I heard them for the first time, even the hairs on the back of my neck stood to attention. 'Don't need you to tell us we're good / Don't need you to say we suck / Don't need your protection / Don't need your dick to fuck...' Bikini Kill was shocking and relentless and brave. The band demanded 'Revolution, girl style, now!' and their music was powerful enough to actually make that feel like a possibility.

I wanted to know more about this quartet from Olympia, Washington. I wanted to devour them, but they were elusive. They refused to talk to the press after 1993 because they felt consistently misrepresented. They never played where I lived. They didn’t make music videos. There was talk in the press of Kathleen Hanna’s friendship with Kurt Cobain and how Nirvana’s breakthrough hit was named after something she had spray-painted on his wall one night: “Kurt smells like teen spirit.”

Bikini Kill’s records were hard to get hold of, but when I eventually did, the wait was worth it. Kathleen swung wildly between barked rage and sing-song sweetness “Feminist! Dyke! Whore! I’m so pretty…” she yelled and then purred on Alien She. It was music that recognised the male gaze and invited it in, only to stab it right in the eyeballs. The band scrawled sexist insults on their own bodies (“SLUT”, “BITCH”, “WHORE”) to take the power of the words away. “These are my tits, yeah, This is my ass,” Kathleen wailed on Lil’ Red, “These are my legs / Watch them walk fucking away.”

I came to find out later that it wasn’t easy to be Bikini Kill. Being righteously, unflinchingly feminist at a time when it was supremely uncool to call yourself one, prompted death threats and even physical assaults. At their shows, Kathleen’s rallying cry of “Girls to the front!” became standard practice — partly because she didn’t want girls to be pushed to the back of the room as they so often were at gigs, and partly because the band needed a line of protection between themselves and the men in the room. “Every night was a war,” notes Bikini Kill drummer Tobi Vail, in the 2013 documentary about Kathleen’s life, The Punk Singer. In the same film, the Beastie Boys’ Ad-Rock, Kathleen’s husband of 12 years, describes the first time he saw Bikini Kill as, “like a car accident. You can’t look away… You’re just like, ‘What the fuck?’”

Bikini Kill ended in 1997, after 7 years. Burned out, depressed and exhausted, Kathleen retreated into a solo project. Julie Ruin was an ultra-lo-fi album recorded and produced entirely by herself. It wasn’t marked by the unfiltered rage that had shaped Bikini Kill, but the rawness remained. Kathleen may not have been screaming as much, but she was certainly still seething. Julie Ruin was a creative purge that wouldn’t turn into The Julie Ruin, a full band, for another 13 years.

In between, there was Le Tigre, an electroclash trio that closely aligned itself with civil rights of every description. It was political indignation you could dance to, and reflective of Kathleen’s roots in the art-punk scene. Catchy hits like Deceptacon and TKO turned Le Tigre into bonafide indie stars. They rode that wave of success for over a decade until Kathleen’s health — a diagnosis of late-stage Lyme disease — forced her off the road.

Today, The Julie Ruin offers catharsis and anger and the wink of humour that has been an asterisk in all of Kathleen’s work. It’s the culmination of her decades of focus and creativity and, frankly, a general inability to be quiet. The band’s second single, Run Fast, contains a verse about Bikini Kill’s legacy: 'Years later, we’d be told that we weren’t real punks / By boys in bands who acted like our dads when they were drunk / And they can all brag now, about how they were there / When we took over the stage and we took our fair share / But whatever the truth, in the end we made / Tiny islands where we didn’t always have to be afraid/ And an X will forever mark the spot / Where we decided we’d had just about enough.'

In the end, for a lot of women my age, everything always loops back to Bikini Kill; what they taught us; the courage and inspiration and refusal to submit to traditional gender roles; the unerring desire to claim our space. In The Punk Singer, Kathleen perfectly sums up her ethos and, rather accidentally, the attitude her fans are imbued with because she taught us so well. “Other people can think whatever they want,” she says, “but they should have to stay out of my way.”

Now, her legacy is everywhere.

Smells Like Teen Spirit: the story behind the single that made Nirvana global megastars…

The 40 best punk albums since Never Mind The Bollocks…

A year-by-year walk through of the 40 best punk albums since the release of Never Mind The Bollocks, Here’s The Sex Pistols in 1977.

The reunited Bikini Kill will be travelling through Europe, the UK and North America next year.

A number of bands have had to cancel shows and postpone tours due to the coronavirus outbreak.

Bikini Kill are playing the USA, Canada and Europe in 2020

Frank Iero: “I Still Have Nightmares… But Quitting Is Not An Option”