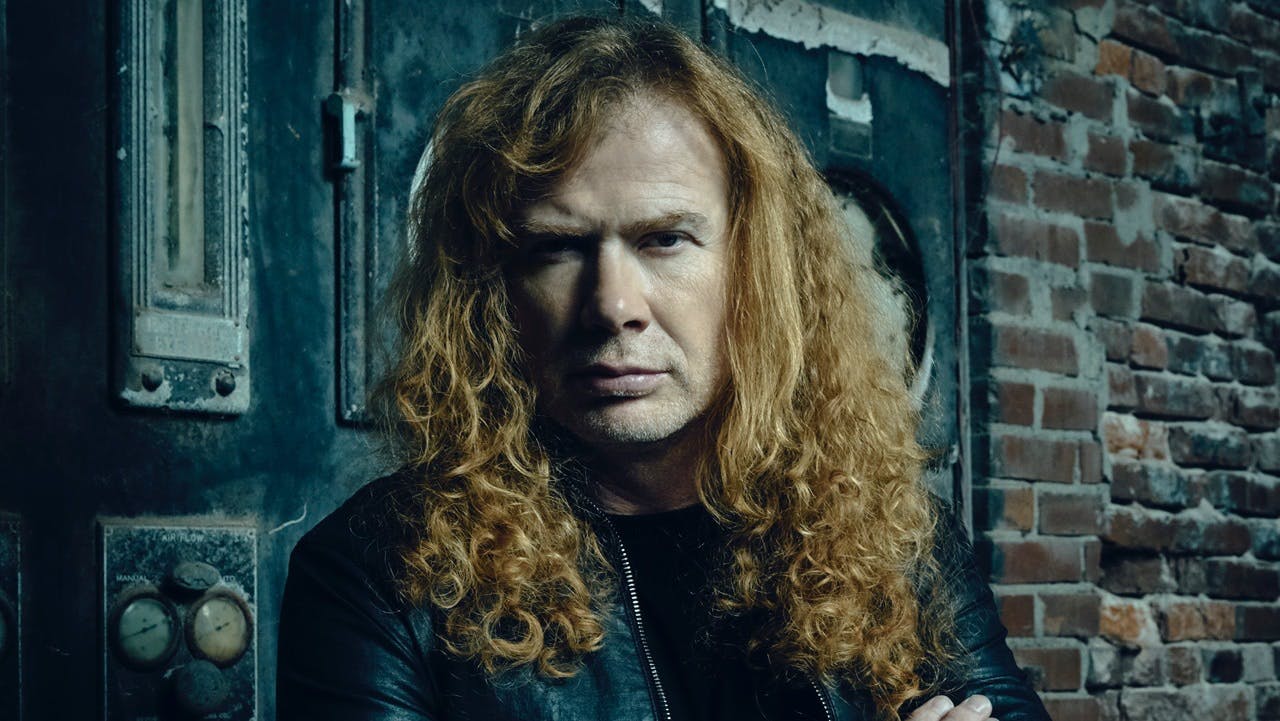 April 11, 1983 was a defining day in the history of heavy metal. Not that Dave Mustaine knew it at the time…

At around 10am the guitar player was unceremoniously awoken by his bandmates, James Hetfield, Lars Ulrich and Cliff Burton. After a particularly heavy evening of boozing, he passed out on his makeshift bed on the floor of the rehearsal room Metallica were using at the Music Building in Queens.

Metallica were in New York to play two shows in the run up to recording their debut album with producer Paul Curcio a few weeks later: the first gig was at the Paramount Theater in Staten Island, the second at fabled Brooklyn venue, L’Amour. The Paramount show had been particularly tense with a loaded Dave allegedly screaming abuse at the headliners, Dutch hard rockers Vandenberg, from the venue’s floor during their soundcheck.

This, of course, was not an isolated incident. The embarrassment he’d caused at the Paramount was just the latest in a long line of increasingly unstable moments. All of Metallica liked a drink, but Dave – whose substance abuse was also on the rise – was a man who, by his own admission in later life, liked to take things further.

On that fateful April morning, the bleary-eyed 21-year-old was told by his bandmates that they’d had enough of his erratic, violent behaviour. He was fired, his bags were packed for him, and his travel home was booked.

Shocked and hungover, the guitarist enquired about the time of his flight back to California. There was no flight. Instead he was handed a one-way Greyhound ticket. The bus left in an hour and James was ready to drive him to New York’s Port Authority Terminal to get it. His gear would follow later.

Metallica had already covertly lined-up Dave's replacement. Ten days prior to Dave’s sacking, manager Mark Whitaker had called Kirk Hammett (then in fellow Bay Area thrashers Exodus) who’d flown out to audition with the band. The guitarist would make his live debut with Metallica on April 16 at a show in New Jersey, prior to heading into the studio with the band.

To the outside world, however, Dave's departure was a shock. Those of us involved in the tape-trading underground metal scene at the time saw him as one of thrash metal’s founding fathers. He’d co-written a number of Metallica’s key songs on their widely classic 1982 demo, No Life ‘Til Leather, helping to define their sound and the scene.

As far as Dave himself was concerned, however, his sacking made him feel as if his entire world had collapsed. In the space of two hours he had lost the people he considered to be his best friends, and he was no longer a member of the band that he felt had come to define him. He now had a four-day bus journey to mull over the perceived injustice of being fired without even being given a warning or a second chance.

Bored on that laborious cross-country trek, he read anything he could get his hands on, including a handbill by the Democrat senator Alan Cranston who, having he declared his presidential candidacy two months earlier, hit the campaign trail and warned against an escalating nuclear threat. “The arsenal of megadeath can’t be rid,” proclaimed Alan's leaflet. That phrase inspired Dave to scribble down the lyrics to a song and, ultimately, provided him with the name of his next band: Megadeth.

When he returned California, Dave was broke and had to get a proper job. A brief stint as a telemarketer followed, as his bitterness over the sacking continued to fester. It would not abate.

That anger was still evident four years later when our paths crossed for the first time in March 1987. Megadeth were in Paris and ready to make their highly-anticipated debut on French soil.

Seven months earlier, the band’s second LP, Peace Sells… But Who’s Buying?, was released. Megadeth’s first major label album, it was an undoubted step up from their debut, 1985’s frenetic Killing Is My Business… And Business Is Good!. The latter was a distinctly lo-fi affair released on New York-based indie label Combat Records, let down by the production (or lack of it) and the fact that Dave had reportedly spent a chunk of the album’s advance on alcohol and drugs rather than studio time.

Starving and at times homeless, Dave's self-destructive behaviour continued unchecked during the recording of Peace Sells… – an album that Megadeth bassist Dave Ellefson would later describe as being recorded on a diet of “heroin, burgers and cigarettes”. The volatility within the band would be further confirmed at their own album launch party, hosted by their label in Hollywood in September ’86, that ended with Dave kicking guitarist Chris Poland in the face in the back of a limo while travelling home.

Despite the circumstances in which it was made, Peace Sells… was a more polished affair, the material more cohesive. The music was more intense with lead runs that sounded more feral than ever, while Dave's lyrical inspiration ran from the personal through to the political and on to the occult. To thrash metal fans, it was viewed as Megadeth’s first genuine defining statement – its title-track hailed as an instant classic.

For all the promise demonstrated on the album, however, Megadeth remained an inconsistent live act. Their Paris debut would underline as much, although once again circumstances seemed to conspire against Dave.

The gig itself had initially been due to take place at celebrated Parisian rock venue, La Locomotive. Following a licensing dispute, however, it was moved the New Morning, a 500-capacity jazz club with a tiny stage on to which Megadeth were just about able to cram their gear. Support act Flotsam & Jetsam – whose ex-bass player Jason Newsted had ironically joined Metallica following Cliff Burton’s death in September ’86 - weren’t quite as lucky and weren’t even able to play.

With portraits of the jazz greats that had previously graced the New Morning stage looking down on them, Megadeth kicked off their set with Wake Up Dead – the rapid-fire opener on Peace Sells... During the course of that one song, it was obvious that the band were almost too loud for the club’s rarified confines. Battling through sound problems and space restrictions, Dave grimaced his way through a 12-song set which nevertheless appealed to the band’s puritanical fans.

Sweat-drenched, red-faced and beer-handed, his sense of frustration was palpable as we settled down to conduct an interview in the cramped dressing room after the show. Some three questions in, I asked him about how he’d composed Mechanix – the song he’d written that dated back to the No Life ‘Til Leather demo, and was re-worked into The Four Horsemen by Metallica when it appeared on Kill 'Em All. It seemed like a fair question about Dave's creative process, not least of all because Megadeth had just played it as a crowd-pleasing final track that evening. The very mention of Metallica, however, proved to be unwise…

“Do you really fucking want me to talk about that time?!” screamed Dave. “Fuck that!” And, without a further word, he upped and left, slamming the dressing room door ferociously behind him. Megadeth guitar player Chris Poland looked at me and shook his head. “I’m sorry about that, man. The wounds run deep,” he said. He was not wrong.

In the subsequent interviews I conducted with Dave, he revealed himself to be an intense complex character – a mixture of arrogance and genuine vulnerability, both honest and evasive in equal measure. His agitation at discussing his ejection from Metallica subsided over time. “We all move on and time helps with that,” he told me in 1992.

Similarly, there have been moments of rapprochement with his former bandmates – most notably the time when Metallica invited Megadeth to play with them at Milton Keynes Bowl in the summer 1993. On that particular occasion, I encountered Lars and Dave talking backstage like old friends and with no rancour.

More contentious is the emotionally-charged scene in Metallica’s confessional 2004 movie, Some Kind Of Monster, where Dave discusses being fired with Lars. “It still feels like yesterday,” he says. “There were ways to address what was going on with my problem. Who I am sober is totally different from who I am drunk. We never gave it a try,” he says, raising the option of rehab that was never discussed at the time.

When the film was finally released, Dave claimed he’d been set up by the film-makers and Metallica – a point that was refuted. The dispute didn’t stop Dave from joining Metallica onstage for their 30th anniversary shows at the Fillmore in San Francisco in 2011, and Megadeth joining The Big Four tour that followed. According to Kirk Hammett, those shows provided Dave with a certain level of closure.

The emotional complexity of the situation makes it sound facile to suggest that the events of that April morning back in ’83 proved to the best thing for all the parties involved. And yet, from a fans’ point of view, that is certainly the truth.

To those of us that grew up during the halcyon days of thrash, we were lucky enough to watch not one, but two bands develop at an astonishing rate. We were proud as we saw them challenge the mainstream and enjoy the first flush of success, claiming their triumphs as our own. And, yes, we also enjoyed the drama of the rivalry that existed between both camps, with Dave's motormouth tirades in particular providing us with insensitive titillation.

If the scars from that time still remain as far as Dave is concerned, he has found his own voice – both literally and figuratively – and created a body of work that genuinely reflects his own personality. Equally, James Hetfield and Lars Ulrich – despite their contrasting personalities – have forged one of the most enduring alliances in modern music. In that context it is impossible to see Dave as part of that partnership, and he knows it.

“I believe in fate. Things definitely happen for a reason,” Dave once told me. The events of April 11, 1983 are proof enough. The seeds sown back then have grown into music that has affected and influenced at least two generations of fans. And that, in itself, should be triumph enough…