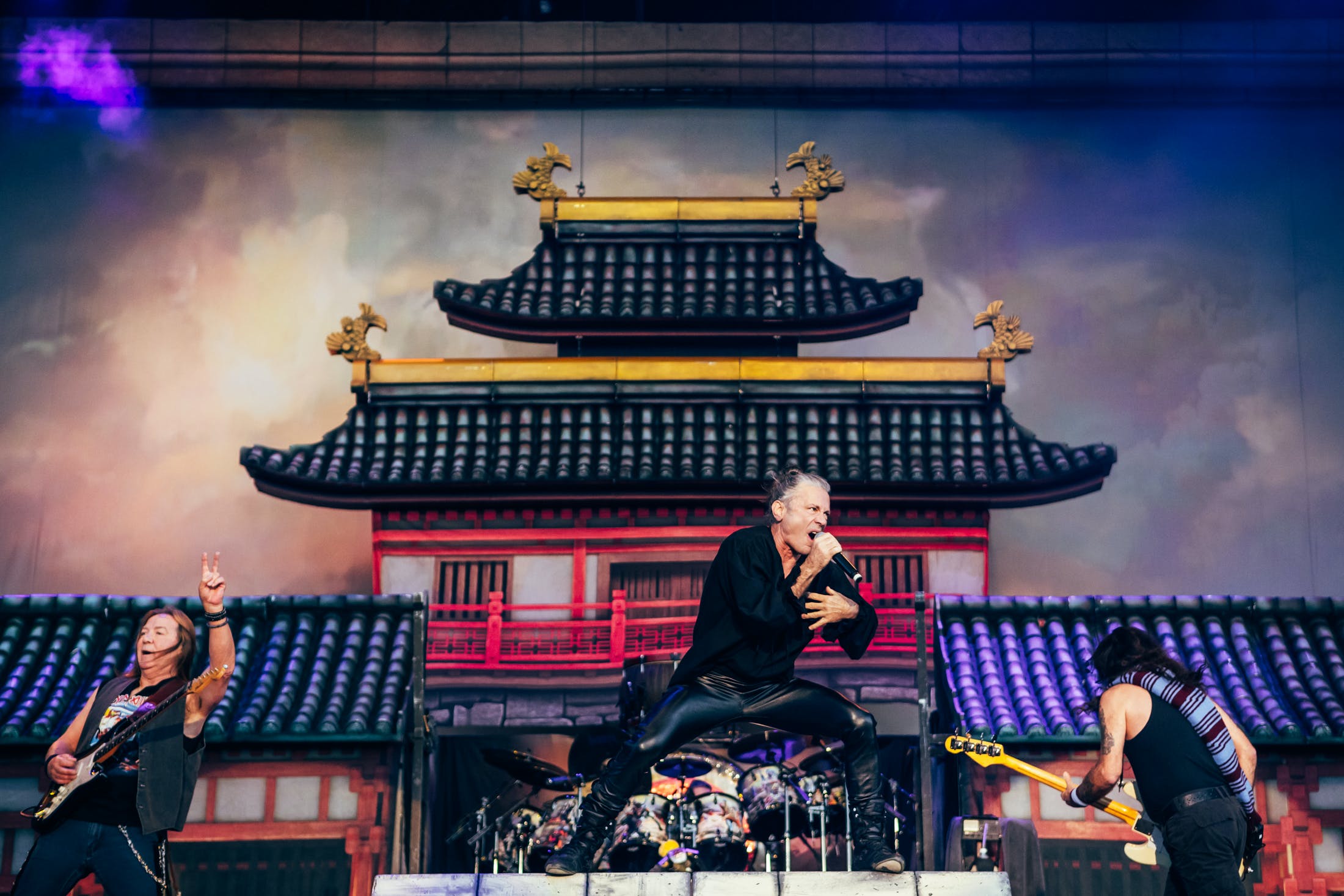 As long as we have Iron Maiden, everything is going to be alright. Thirty years on from their iconic Live At Donington recording – and 34 since their headline debut – they have done more than anyone to build what was once simply a motorsport circuit into the spiritual home of heavy metal. Spectacularly, even on their seventh turn at the top of the bill, they're still stubbornly tightening the bolts and raising the game. Reluctance to lean on nostalgia is a massive part of that. With the stage decked out like a Japanese tera, we're launched straight into the booming title-track from Senjutsu this evening, beginning what's effectively a mini-showcase of recent material. Samurai Eddie is straight into the fray, and frontman Bruce Dickinson's sporting a traditional topknot, emphasising the high theatricality at the heart of Stratego and The Writing On The Wall.

It's to their massive credit that those songs hold up against what's coming next, because after a set-change so drilled it'd put certain Formula One pit crews to shame, it's (back in) time for the Legacy Of The Beast set proper. "It's been a shit few years for all of us," announces Bruce, "but that all ends in this field tonight." There's no more poignant soundtrack for a cathartic outpouring than the magnificent Blood Brothers, which sees arms around shoulders and damp eyes across site. The Sign Of The Cross is dramatic reminder that there was brilliance even in Maiden's weakest era. Spots of sublime silliness – Bruce struggling to wield dual flamethrowers and a mic during Flight Of Icarus, then emerging for Fear Of The Dark in a ludicrous phallic-mask/top-hat combo – somehow only heighten our affection for those uber-classics.

We could spend an age unpicking the waves of emotion that washes over the endless audience, but not to put too fine a point on it, we're in heavy fucking heaven. Hallowed Be Thy Name. The Number Of The Beast. Iron Maiden. The first encore sees a field-rousing The Clansman ("FREEEEDOM") sandwiched between The Trooper and Run To The Hills. Then we get a surprise second, with Churchill's 'We Shall Fight On The Beaches' speech opening into a soaring Aces High – with a damn Spitfire suspended from the rafters. As a two-hour exercise in old-school maximalism, it more than hangs with KISS' farewell the night before. But when you factor in Maiden's eccentricity, intelligence and fathomless catalogue of genre-defining classics, they're absolutely untouchable on a stage like this.

Iron Maiden have become the fifth band ever to be immortalised in stamp form by Royal Mail – see the 12 images (eight live pics and four Eddies) here.

Iron Maiden announce 2023 The Future Past UK and European tour

It’s happening! Iron Maiden have announced they’ll be bringing The Future Past tour to the UK and Europe next summer…

From Mike Patton to Iron Maiden: The icons who inspired Zeal & Ardor

Zeal & Ardor’s take on black metal is an eclectic melting pot. But what inspires the broad church of noise? Mainman Manuel Gagneux reveals the musical heroes that guide him…

With Bruce Dickinson in their ranks, there was no stopping Iron Maiden with their now-iconic album, The Number Of The Beast…

Book review: Denim And Leather: The Rise And Fall Of The New Wave Of British Heavy Metal