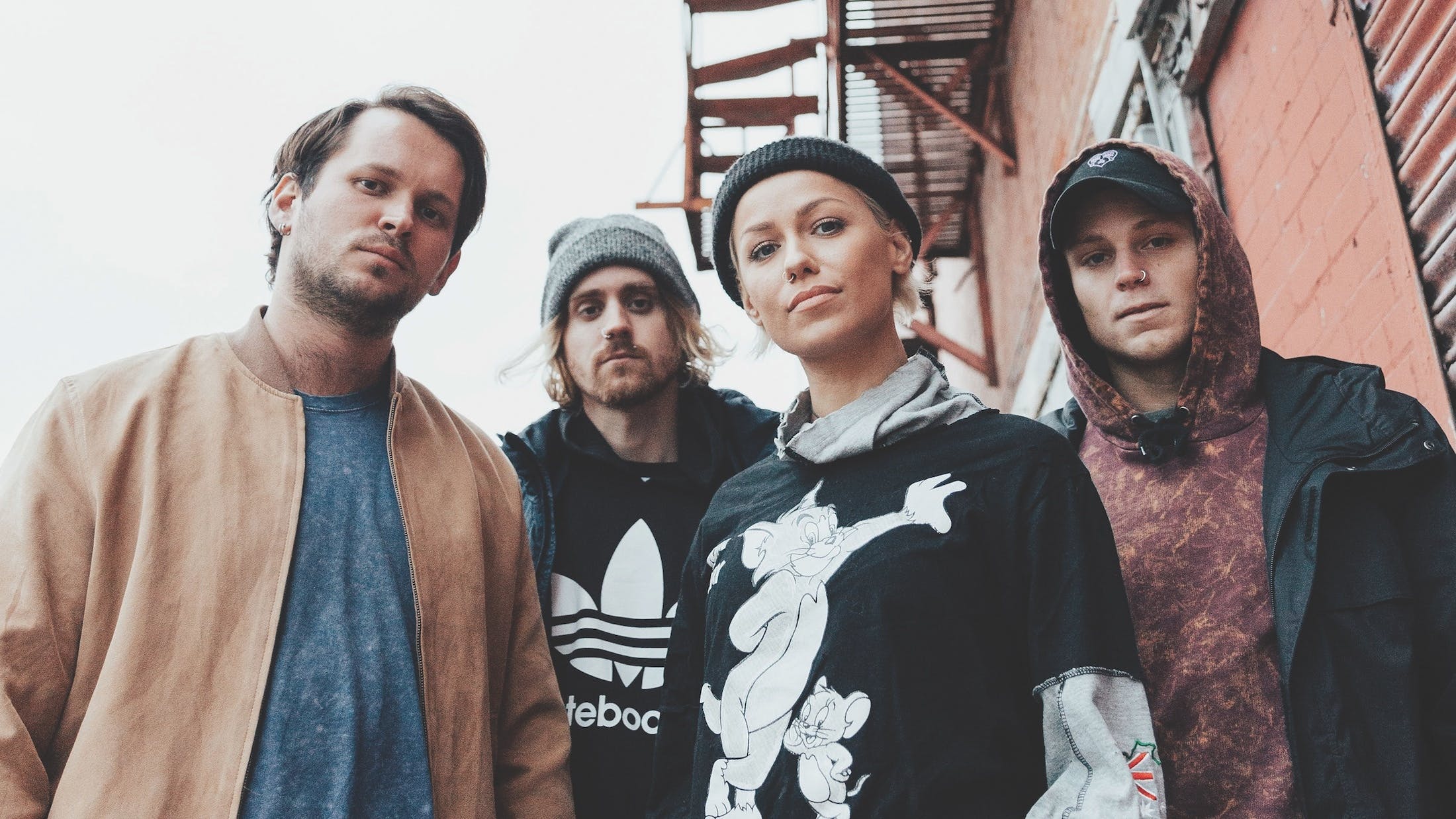 In May 2008, on the eve of Jenna McDougall’s 16th birthday, the members of Tonight Alive gathered at their vocalist’s house for the first time. They jammed songs in the garage, watched DVDs in her bedroom and then joined their wider circle of friends to celebrate.

A few local shows and support slots for Short Stack and 3OH!3 later, Tonight Alive embarked on a full Australian tour. Having not played a show outside of Oz, they flew to LA in 2011 to record debut album What Are You So Scared Of? and collaborate with Mark Hoppus, and in the years that followed, the band – now completed by guitarist Jake Hardy, bassist Cameron Adler and drummer Matt Best – went on to release a further three LPs, tour globally and cement their place as one of the most important bands in the pop-punk scene.

Tonight Alive’s story isn’t without struggle, though. With the announcement of their most recent record, Underworld, came the news that founding member Whakaio Taahi was leaving the band to focus on a career in production, casting a shadow over an otherwise triumphant return. Before this, Jenna had spent years struggling with her physical and mental health, whilst things had just come to a head with previous label Sony, who’d encouraged the band to write a commercial record, 2016’s Limitless, before quickly shelving both the album and its creators.

The past 10 years have seen Tonight Alive travel a long road covered in peaks and troughs, every success seemingly offset by a new challenge. But with a new label (Hopeless/UNFD) and a renewed focus stemming from Underworld, Jenna, Jake, Cam and Matt are bringing 2018 to a close in a celebratory manner, marking their 10-year anniversary with a UK tour across November that will include some special acoustic shows, and a setlist voted for by fans. It’s an event which will invite the members of Tonight Alive to take stock of what they’ve achieved over the past decade, and as these letters they’ve penned to their younger selves’ reveal, this band’s story is one hell of a ride…

“Those brainstorming sessions and practices at Jenna’s house might seem innocent now, but they’ll form the start of everything that’s to come. You’ll go to LA to record your debut album, and whilst you’ll have no idea what you’re doing when you get there, the memories you make will stick with you forever. That recording experience will lead to your first overseas tour, where you’ll spend six days of the week sleeping in a van, before treating yourselves to a hotel on the seventh night. Nine of you will share a single room, but you’ll all be so happy.

“This band will completely change you as a person, and you’ll become a lot more confident. You’ll get to travel the world with your best friends, so make sure to enjoy it! A lot of people go straight into university and after that to a job, and then they hit their mid-twenties and realise they don’t want to be doing that, but stick with the band and you won’t feel that way about your life. You’ll leave your problems behind and go away on tour, and that will allow you to reflect on things back home.

“Tonight Alive will lead to you feeling complete contentedness and enjoyment with life. There’ll be tough times, but the good will far outweigh the bad. You’ll have a lot to reflect on, and things won’t always be easy, but you’ll play some incredible shows, and you won’t want to change a thing. You’ll make it so much further than you ever thought you would, and you’ll feel incredibly proud. It’ll be a phenomenal experience, and you’ll be so grateful that you got to be a part of such a special band.”

“Tonight Alive will go through a few inceptions, but Jenna joining will be the turning point. She’s a special talent, and it’s a combination of that talent and the drive of you all that will see you right.

“That dream you have of being in a successful band will become a reality. You won’t stay the same confident kid you are today – you’re actually a pretty terrible musician at the moment – but you will make it, and you’ll do some insane things. Keep believing in yourself, because that will carry you forward, and the time and money you’re investing now will allow you to build up this band. Your faith and commitment will be rewarded.

“One of the hardest lessons you’ll learn is that you can’t trust everyone. Don’t naturally believe people, because sometimes they’ll lie to your face. There’ll be many times when people won’t have your best interests at heart. I don’t know whether you’ll take note of this advice, but it’ll save you from experiencing some tough times in the future. You’ll come through those negative experiences stronger, though, and those hardships will bring the band closer together. It’ll wear on your soul at times, and you’ll need to dig deep, but you’ll pull through it.

“The songs you write are things you’ll remain proud of for years to come, and you’ll be blessed enough to live out your dream. The business side of the band won’t always be easy, but you’ll develop relationships with so many amazing people, and you’ll feel so grateful for everything you’ve got to experience with Tonight Alive.”

“This band called Tonight Alive are going to kick out their original drummer, so when your mum tells you they’re looking for a replacement, make sure you call Whakaio up! Because if you do, two weeks later you’ll be playing your first gig for them supporting Short Stack in a sold-out, 1400-cap venue, and after that, you’ll do a full tour of Australia. You’ll be nervous at those early shows, though, so keep your head down and focus on your snare!

“You’re going to tick-off so many things on your bucket list. Live your life in the moment and appreciate the good times, and don’t get too caught-up in making sure everything is perfect, because the best gigs will fly by. When you’re sat up there on your kit, make sure to look out and reflect on everything that’s led you to that point. Stay hopeful and keep trying to write better songs, and pay your dues by doing those small tours in the van. Continue having fun and keep pushing to breakout of Australia, because it will allow you to do some amazing things.

“You’ll be working with an insanely creative mind in Jenna, and you’ll get to collaborate with some of the best producers and writers in the world. Cherish being in that environment, because it will help you progress as an artist, and you’ll end up on the world stage as a professional musician. You’ll support some of your favourite bands like Simple Plan, and whilst you look up to All Time Low right now, you’ll end up playing shows with them, too. You’ll play Warped and the Kerrang! Tour, and you’ll learn so much by working with people like Mark Hoppus and Mike Fasano.

“There will be times when you won’t know what the future holds, but things will always work out. Jenna will have to deal with intense health issues, but you’ll be in awe of the strength she shows to get up onstage every night.

“You’re going to go on a journey that’ll be nothing short of amazing. Keep believing that everything happens for a reason, because each experience helps you to grow. With every high and every low comes a lesson, and in the end, you won’t want to change any of it.”

“Those band DVDs and concerts have only shown you 15 per cent of what it means to be in a band. You might not headline stadiums, but you’ll play theatres and rock clubs, and those sold-out, intimate experiences will allow you to connect with people and affect their self-esteem. Tonight Alive will unfold into a really unique, beautiful thing. A few months after you audition for the band you’ll play your first gig, and that will be an unforgettable night. People will embrace you, and whilst you’ll go on to have other struggles in the scene, your introduction to it will be really positive.

“You’ll be exposed to challenges that only come with being in this band, but if you face things head-on and treat them as a lesson, you’ll become a better, stronger and more fully-evolved person. You’ll be confronted by difficult things that people who don’t live a touring life won’t relate to, but you can embrace and conquer those challenges, and you’ll be glad for the experience.

“Some people are going to try to control and manipulate you. You’re very susceptible to fear of judgement and not being accepted, so get used to expressing yourself honestly and without fear of what the reaction will be. You’re going to be challenged constantly, but keep trusting that you’re powerful and you’re going to deliver a message to a lot of people that’s going to affect their lives. You need to have confidence in the fact that what you’re doing is really important and has a purpose. Don’t sweat the small stuff, because your path is long and wide, and you’ll need to self-protect along the way.

"Your ability as an artist will improve and reach a level you’ll be truly happy with. Your artistry will be fully unleashed, and with every album you release you’ll become more satisfied with your creativity – you’ll write a song called Temple, which will really encapsulate that. You’ll come to consider yourself as a genuine singer, rather than just someone with a nice voice, and you’ll develop your vocals into something you’re really proud of. Performing will be a huge emotional release, and being onstage will help you become confident and allow you to embrace your identity.

“You’ll write a record called The Other Side, and the UK tour you do for that will forever stand-out in your memory, because you’ll play two sold-out nights at London’s KOKO. It’ll be a magical time for you and your fans, and that period will go down as a golden era for Tonight Alive and allow you to solidify your place in the scene.

“After that, your label will encourage you to write a more commercial album. That record, Limitless, will be surrounded by a lot of stress and pressure; you’ll suffer an identity crisis and do a lot of soul-searching, and that will develop into health and interpersonal issues. But, after leaving that label, you’ll emotionally recover by writing an album called Underworld, and you’ll be happy again.

“The music you play won’t be seen as cool by everyone, and when you’re starting out, some people won’t take you seriously as a 17-year-old woman, but you’ll prove them wrong and achieve your ambition of becoming respected and credible. The most important thing is that what you’ll accomplish will be worthy of recognition, and you’ll develop a great respect for yourself as the years go by. And for the first time in a long time, you won’t be worried about the future.”