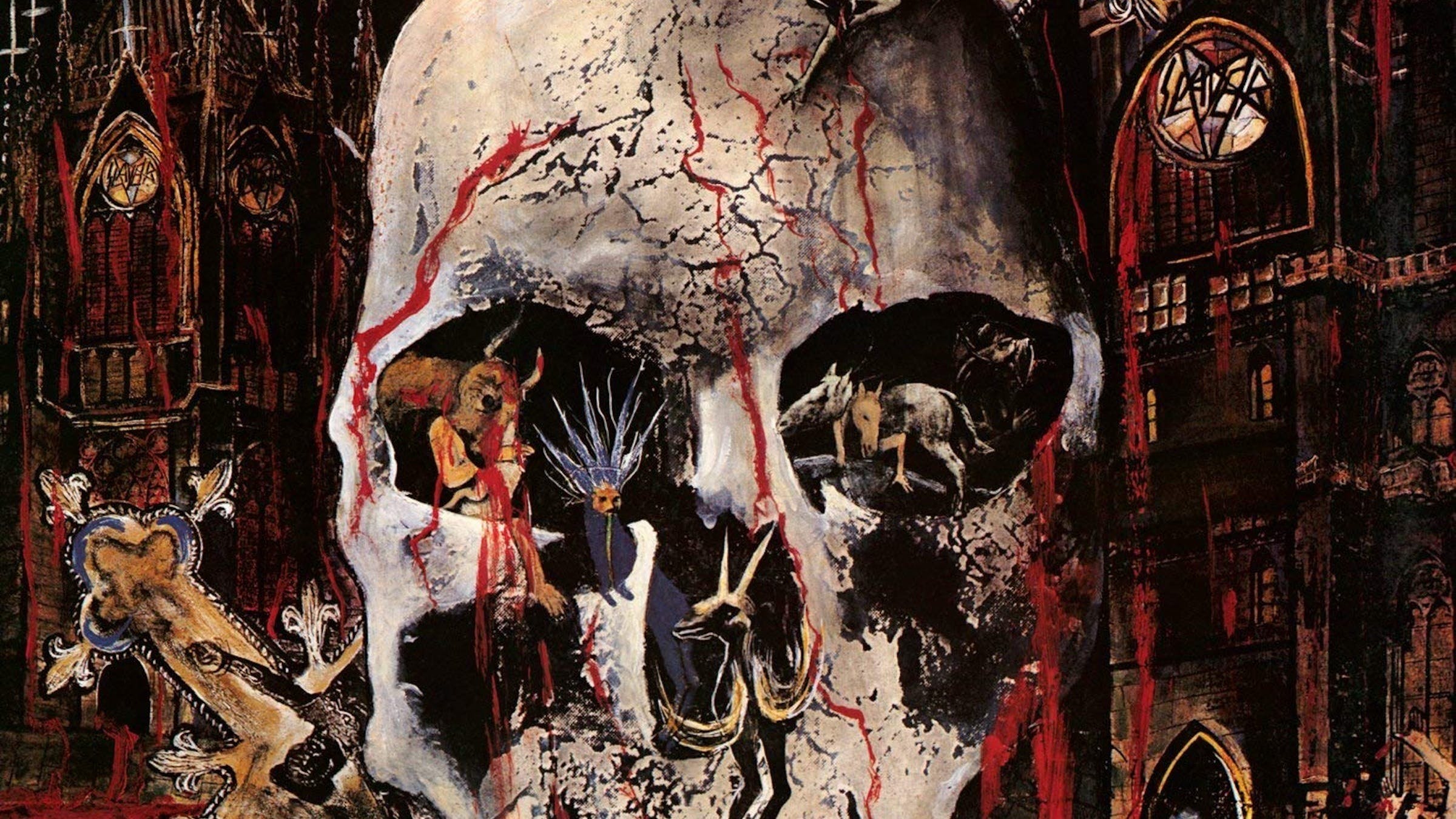 For the first chapter of their career, Slayer were pretty damned evil – but with all due respect, they were mostly just fast, loud, and angry as hell. The Los Angeles thrash quartet’s albums had – up until the late ’80s – been more about a mixture of rabid speed, believable rage, and shock value than anything else. 1983’s Show No Mercy was all rollicking tales of black magic warriors, while 1985’s Hell Awaits played with concepts like vampires, necrophilia, and the biblical Hell. Even 1986’s Reign In Blood, considered by many to be the band’s pinnacle, is fuelled more by wrath than menace.

But with 1988’s South Of Heaven, Slayer officially became the most evil band in metal. By experimenting with tempo and writing lyrics with a more psychological approach to the horrors of both this world and the next, Slayer evolved from a burning tank with no brakes speeding across the battlefield, to a sonic shadow spreading across the face of heavy music and plunging it into endless night.

To be fair, it’s not as though Reign In Blood was tame. In the blistering 29-minute blur from its start to finish, Slayer's third album covers topics like murderous madmen, world-ending disease, ritual sacrifice, and the atrocities of Nazi scientist Josef Mengele, all backed by Kerry King and Jeff Hanneman's classic riffs and shrieking solos. And yet, for all its unstoppable rancor and whirlwind technicality, Reign at times feels accidental. It's as though Slayer hit an incredible sweet spot without meaning to. The band even admitted that the songs ended up faster on tape than they were supposed to be; Dave Lombardo once said, “When the songs were written, they were slower, but when we recorded them they just got faster and faster.”

What defines South Of Heaven, first and foremost, is its purpose. The fact that the record is slower and creepier than Reign In Blood wasn’t organic or a coincidence, but rather an intentional move away from writing the same album twice. “The only time we made a collective decision to do something different was with South Of Heaven,” Kerry King told Guitar World in 2008. “We had done Reign in Blood, and we said, 'Let's give them something they won't expect.'” As such, South Of Heaven sounds less like a shooting spree and more like a killer stalking their victim, driven by a sinister urge to a very specific goal.

The proof, meanwhile, is in the songs. South Of Heaven’s opening title track is an eerie, patient descent into perdition, its lyrics depicting a form of eternal damnation that we all know too well from our everyday lives (Tom Araya went on to confirm that concept – “South Of Heaven is how I imagine Hell on Earth, and the decline of mankind”). Silent Scream, though speedier than South, still pursues broader disturbing concepts, while Live Undead drags listeners deep into the mutating mind of a corpse turning into a zombie. Behind The Crooked Cross takes Slayer back into the Third Reich, only rather than showing off the repulsive horror of Nazi war crimes, the band instead examines the slow-dawning dread of a German grunt realising what exactly he’s fighting for.

Mandatory Suicide is perhaps the most diabolical yet sympathetic track on the album – its central riff is as towering and malevolent as the satanic chapel on South Of Heaven's cover, but its lyrics describe the inevitable agony of being drafted into war, all summed up by Tom Araya's haunting spoken-word closer. Ghosts Of War is a nuanced tale of historical terror in one of the band’s most irate thrash songs, proving that Slayer still had plenty of thrash up their sleeves. Read Between The Lies goes full anti-religion, Cleanse The Soul mocks the funeral rites, and Dissident Aggressor turns an ornate Judas Priest track into a towering war machine. The album closes with Spill The Blood, Slayer at their slowest, a song which seems to grin in demonic glee at the listener as it declares, “I’ll have your soul.”

By slowing down, Slayer’s riffs were finally given room to sound as wicked as they possibly could. There are moments of this present on Reign – the opening and closing riffs of Raining Blood, for example, or the beginning of Criminally Insane – but it wasn’t until Slayer chose to take things slow that Slayer could show off their true unholiness. The echoes of this can be heard throughout the rest of their career, from 1991’s Dead Skin Mask to 2015’s When The Stillness Comes.

Of course, in classic fashion, South Of Heaven’s power was only recognised later on in Slayer's career. In fact, when the album came out, fans were angry at the band for not serving them the same dish twice. “That album was a late bloomer – it wasn’t really received well, but I guess it kind of grew on everybody later,” frontman Tom Araya admitted to Decibel in 2006. However, as metal became less of a faster-louder-noisier arms race, and black and death metal artists began appreciating the atmosphere present in slowed-down riffs, the oozing gore and spiritual malaise behind South Of Heaven grew to be appreciated for the simmering savagery.

Today, Slayer are known as more than a force for chaos and volume – they’re a sonic conduit for all the evils of the world. But that only came about when they took their sweet time and applied more nuanced examinations of the Devil’s work to their sound. South Of Heaven forever marks the point where Slayer became a band whose music was truly steeped in all things twisted and evil. And for the type of metal fan looking to celebrate blasphemy, carnage, and the triumph of death, it changed everything.