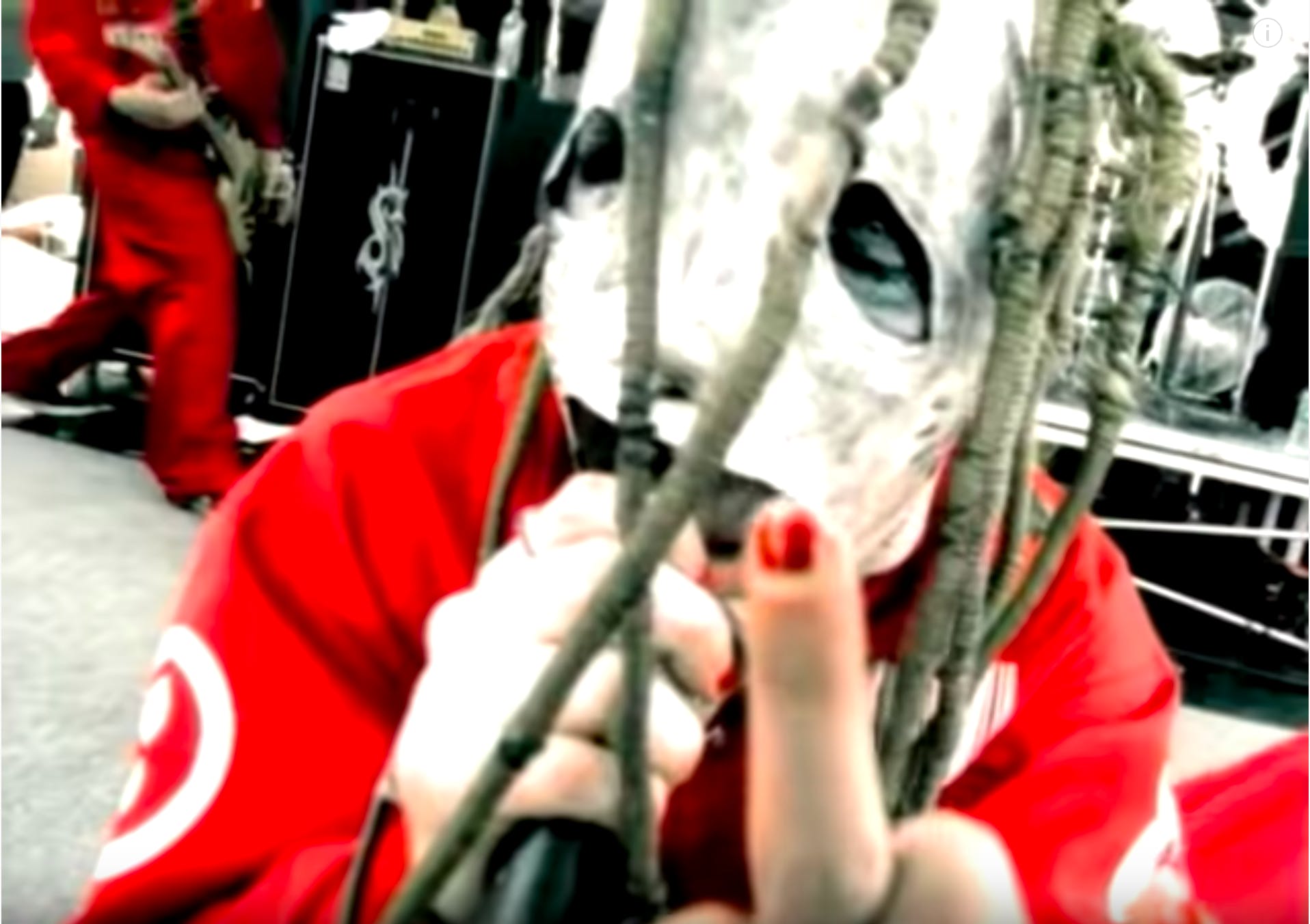 There’s a moment in the BBC documentary, Slipknot Unmasked: All Out Life, when Shawn ‘Clown’ Crahan is detailing the damage his band has done to him over the years. “The injuries have stacked up to a point where it’s like, ‘Be careful,’” the musician explains of his mentality when hitting the stage these days. “It’s the things that are starting to happen because of the longevity of the band. It used to be bones and things like that, but now there’s a responsibility in making the decisions I make…”

Indeed, having been pummelling audiences – and each other – for the last 20-plus years with their game-changing brand of metal, each and every member of the ’Knot has inevitably succumb to the dangerous nature of their live show. And while the fire is now reserved for production rather than for use on each other, the burns, scars and long-term effects of their wildly aggressive performances are as long-lasting as their career. So, we decided to look back over some of the band’s worst, and downright weirdest, onstage injuries.

(Side note: You will notice that some of the band members crop up on more than one occasion. Tsk, tsk…)

Just two years after his first official gig with the ’Knot, the band’s still relatively new frontman ended up damaging himself for life during a pivotal show for the Iowa titans. Taking a pretty horrendous tumble offstage during Ozzfest ’99, Corey later recalled that he thought he’d either broken his neck or cracked his skull (both perfectly fine options, right?). “I slipped and landed on top of my head and twisted my neck,” the vocalist told Jon Wiederhorn in the book Raising Hell: Backstage Tales From Metal Legends. “I could move all my fingers and toes so I was like, ‘Fuck, okay, I’m fine,’ and I finished the show.” As you do, Corey. As. You. Do.

That time Sid Wilson broke both his heels. And carried on performing anyway…

Not only is there actual video footage of the moment Sid Wilson broke both his heels onstage, there are plenty of wince-inducing clips of the DJ uncomfortably soldiering through the pain of his most fabled injury, too. On the first date of the band’s All Hope Is Gone touring cycle, while playing at the Rockstar Energy Mayhem Festival in 2008, Sid – as he so often does – leapt through the air mid-performance… and ended up plunging around 15-feet back down to Earth during Disasterpiece. “For some reason I was a little far behind myself and I had on all 30, 40 pounds of leather and chains – kind of a Road Warrior thing,” he later told Spin. “I was cocky and I didn’t look at the arena first. So I jumped and smashed into my heels and broke both of them.” Not only did Sid carry on with the gig despite practically destroying his heels – he also vowed to finish the entire tour in a wheelchair. Ridiculous.

Continuing with the apparent theme of messed-up feet here, Slipknot’s quietest and usually most tucked-away member has still gone through his share of pain. Case in point: the time his bandmate Clown’s 50-gallon oil drum landed on his big toe… and broke it. Obviously. While Craig – otherwise known as The Silent One – is so rarely heard, we can imagine several expletive words that must have come out of his zipped-up mouth on this one occasion.

That time Clown damaged his hands and arms... permanently

Okay, this isn’t just one singular moment… it’s happened at every single Slipknot show ever. You know how frickin’ badass it looks watching Clown smash up his kegs with a metal baseball bat (or, during the band’s We Are Not Your Kind Tour, a flaming metal baseball bat)? Well, he’s caused himself a lot of harm because of it. In fact, in Slipknot Unmasked: All Out Life, the percussionist explains, “I have the worst tendinitis and carpal tunnel from hitting a keg with a pipe. It’s called shock. When you use metal on metal, the vibration has to go somewhere, so it goes up the bottom of the keg and then it goes up my arm. A normal person would just quit using the pipe, but I can’t get the sound out any other way. It’s part of the recipe…” Sounds, er, delicious?

If breaking his neck wasn’t already enough damage done, The Great Big Mouth also has a “blue, hairless patch on his right leg” according to Rolling Stone. The cause? Being lit on fire by his bandmates, obviously. While Slipknot no longer burn each other alive at shows these days (which is nice of ’em), the frontman’s legs have certainly seen better days. In fact, having been lit on fire so many times, Corey eventually got tattoos to cover up the scars. “They were lighting my legs on fire every night,” he told Revolver. “They would always start with the bottom of my fuckin’ overalls… I’d feel them gathering around me and squirting me down with lighter fluid and then, ‘Wooosh!’ Next thing I know, I’m rolling to keep [the flames] from getting up to my face.” Yikes.

If burns and broken bones weren’t enough, you can also add blood to the mix. While Mick Thomson’s headbanging has given him “severe back problems” in the long term (in fact, he, Corey, and fellow guitarist Jim Root have all had spinal surgery, most likely down to their relentless onstage performances), the guitarist has also created something of a mess before, too, courtesy of – who else? – Clown. Apparently during a show, one of the percussionist’s pipes took a nice chunk out of Mick’s fretboard, and he ended up slicing his hand open while shredding. As if some of those riffs aren’t already hard enough to play…

Even Slipknot’s newest member has been hurt – and it’s no surprise given how recklessly he throws himself around every single night, much to the enjoyment of the onlooking Maggots. In Birmingham on the band’s recent We Are Not Your Kind UK Tour, Corey informed the crowd, “It wouldn’t be a Slipknot show without a little bit of blood…” after Tortilla Man’s gory wound forced the band to temporarily pause the gig between songs while he could tend to the injury. “Bleeder last night,” Clown said to NME the following morning, while pointing to his silent bandmate. “There was a lot of blood onstage. The set is different, and the blood just proves it. Last night something got out of line and there’s blood everywhere, and you’re like, ‘Uh…’” Yep, that’d pretty much be our response, too.

That time Corey's scalp got infected

Another one from the early days. Having worn masks for more than two decades now, the frontman has learned what works best for him – both from a performance standpoint, and also one of comfort. But on the band’s self-titled debut album cycle, Corey pulled his own dreadlocked hair through the holes in his mask… eventually resulting in a scalp infection. “The hardest [mask to wear] was my original with the dreads,” he later told Kerrang!. “And that’s full-headed… there’s just no getting out of it. At least when you’ve got some kind of a half-mask with buckles, you don’t feel like you’re singing in a Portaloo. But when it’s closed, you just put this big rubber hood on and there’s no getting out of it.” Yeah… that’s just absolutely gross.

That time Sid broke his ribs

Corey once revealed that on just one single Slipknot tour, the nine-piece amassed “45 broken ribs and 240 stitches” between them. A number of those are unsurprisingly courtesy of Sid, whose gravity-defying jumps – as we already know – don’t always end up with a safe landing. Having once leapt off a balcony in Germany, the DJ’s fall was broken by the floor rather than the relative safety of the crowd’s hands – though at the time, he didn’t even realise the damage he’d done. “They said, ‘Oh, your ribs are broken, you have to lay down in bed for weeks and heal,’” he told Revolver of the moment he finally went to hospital. “And I said, ‘I can’t. I’ve got shows to play, so give me a rib brace.’” Maybe just accept the offer of staying in bed next time, mate?