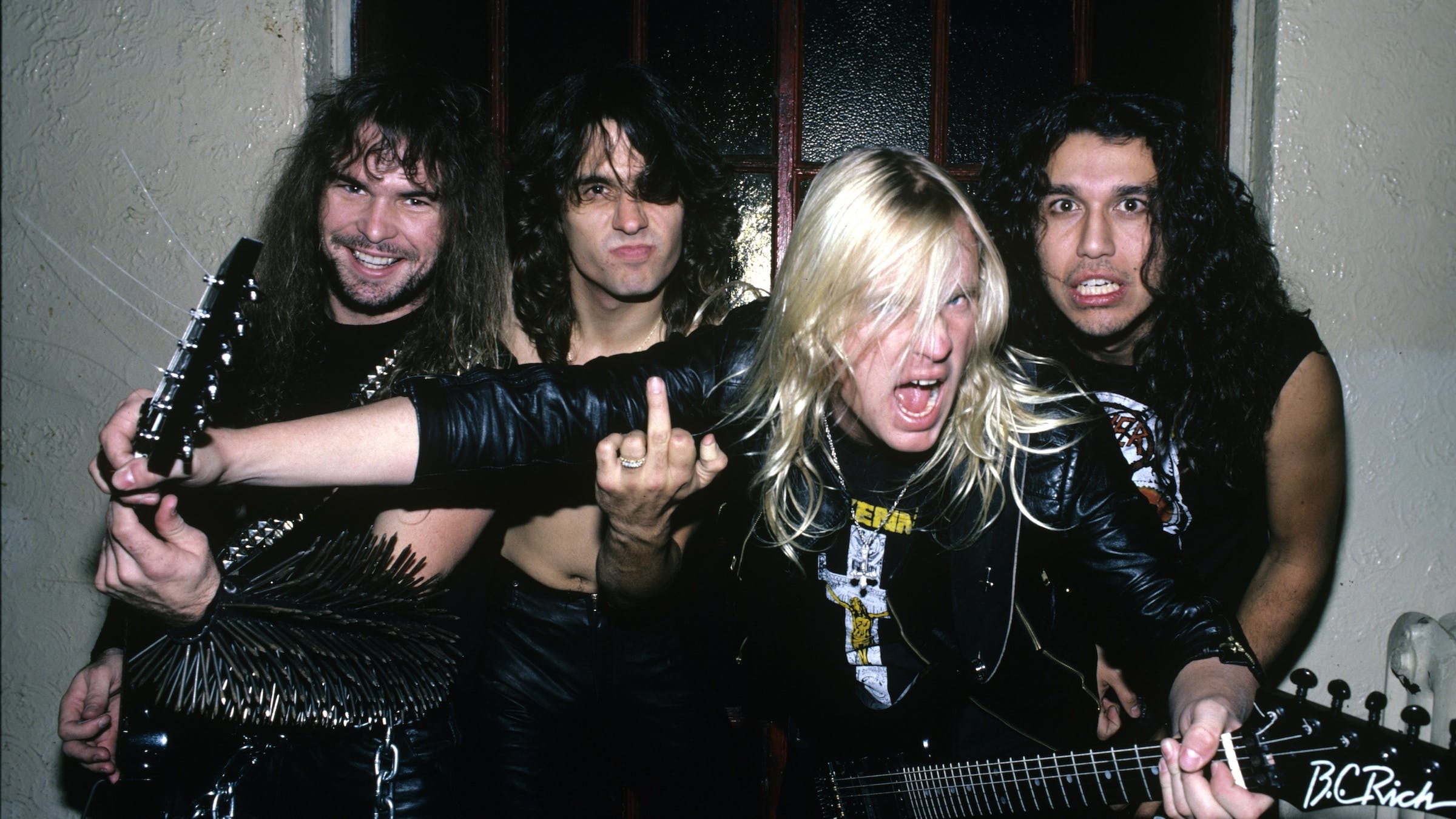 Today marks seven years since Jeff Hanneman died at the age of 49. He was the main songwriter for one of the most prolific bands in metal history. The riffs, stories, and sheer power that flowed from his mind echoed youthful aggression and morbid fascination for almost four decades. Through harsh phrasing and rippling speed, his guitar conjured direct pathways to Hell itself. Lyrically, he horrified audiences and left us questioning our humanity on earth. His simple creative ideas inspired followers to mutilate their bodies in tribute, express their fanaticism with gang-like mentality, and forever explore their loyalty to the darker side of the afterlife. Jeff’s dedication to his craft was truly remarkable. He was brilliant, a legend, and unfortunately drank himself to an early grave. And on this bittersweet earmark, we hope to pay tribute to the man who gave many a metalhead their first injections of pure evil.

Sure, there are plenty of seminal metal bands (especially those bands who were part of the Big Four of the '80s, as thrash initiated metalheads into the speed trials within metal) that gave us our initial itch. We all remember hearing Metallica for the first time, or staring for hours at a Megadeth album cover. We’ve all received our gateway drug at some point in life. But nothing was truly as dark and eye-opening as Slayer.

For wayward, disenfranchised young rockers, they held open the gates to morbid curiosity like no other band prior, creating a truly dark and aggressive auditory cardiac arrest on your soul. Theres no denying it. The opening riff of South Of Heaven, the first lyric in Angel Of Death, the whole ending of Raining Blood, the sheer speed of War Ensemble -- all are unforgettable classics created not only by Slayer, but most importantly by the hands of their quiet rhythm guitarist.

As we reflect back on 2013 when the loss of Jeff seemed sudden and surprising to fans, it’s done nothing to stop the loyalty and dedication that Slayer has always commanded. Even with the quick replacement of Gary Holt to fill his shoes, listeners are still just dying to hear his riffs played by one of his oldest friends. Holt being outspoken about how honored he is to play the part and execute guitar parts and that even he has worshipped. So it’s no surprise that in the recent years, as the band claims to have been on it’s final tour, the lack of momentum is still unforeseen. That’s a powerful experience and legacy to behold. A testament to Slayer’s legendary status, to which Hanneman wrote the playbook.

How do you write a metal memoriam for someone who’s made it all the way to hell? It awaits, he pursued, and then he went to find it, waving salutations and cheers to us from behind the flames, greeting us with mournful cries and reverse galloped thrash riffs that bend time and evoke evil. Imagine what kind of funeral for a man as such would suit? Eulogy after eulogy given by mild-mannered German relatives to a calm church room filled full of confused fans paying their respects. Everyone waiting for the tidal wave of blood to come bursting through the doors; enter Satan to collect his favorite rhythm guitarist from the urn. No applause, no cheers, just a silent stare into the deep red, knowing that Hell is happier having a full-time Hanneman in their grasp.

Indeed, Jeff’s memorial didn’t go anything like that. It was met with what most Slayer fans would expect: an outpouring of great respect for his contribution to heavy metal. Most of which can now be viewed in entirety on YouTube. That said, and perhaps most importantly, it was not held in a church.

When someone you know dies, it’s best not to reflect on what took them away but rather focus on what they did with their life, while alive. There’s an old adage: “If someone wrote a book about your life, would you read it?” In Jeff’s case, think of each album as a chapter of his life’s book. Haunting The Chapel, Hell Awaits, Seasons In The Abyss, South of Heaven, Show No Mercy, Reign in Blood. A collection of stories that millions of fans read over and over in screaming allegiance throughout his living years and even further past his death.

How do we remember the heydays of the band at it’s peak? We do it with personal in-depth life changing experiences. That is the common thread amongst almost every Slayer fan: they can all tell you when they first heard them. Not only can some describe when they heard the band as a whole, but they remember hearing the riffs, the picking patterns and their combination with the Lombardo double-bass, and, lest we forget the terrifying words that accompanied (written by Hanneman too!). These vivid details are burned into our memories forever only proving their strength and justifying their importance.

So as the years go forward, and we all move closer to death, I encourage all who miss Jeff Hanneman to do exactly what he inspired us to do during our first listening. Scream like you’re falling down a well during Angel Of Death. Turn your car stereo to 10 in the mall parking lot, and roll your window down slowly so that you can release your devil-horned hand on an outstretched arm. Shout "SLAYER!" at anyone you see in one of their T-shirts. Dub cassette copies of Show No Mercy and hand them out in a local high school. Turn out all the lights and whisper the lyrics to Black Magic with eyes closed. Rewind and replay drum sections that send your group of friends into cheers and hails. The list could go on and on, and it should. A band like Slayer gave us all a reason to love metal for our lives. And for every credit you give the band during your metal career, never forget the individual who’s ideas changed our lives forever.

Jeff Hanneman, you will forever be a monumental metalist. See you in Hell.