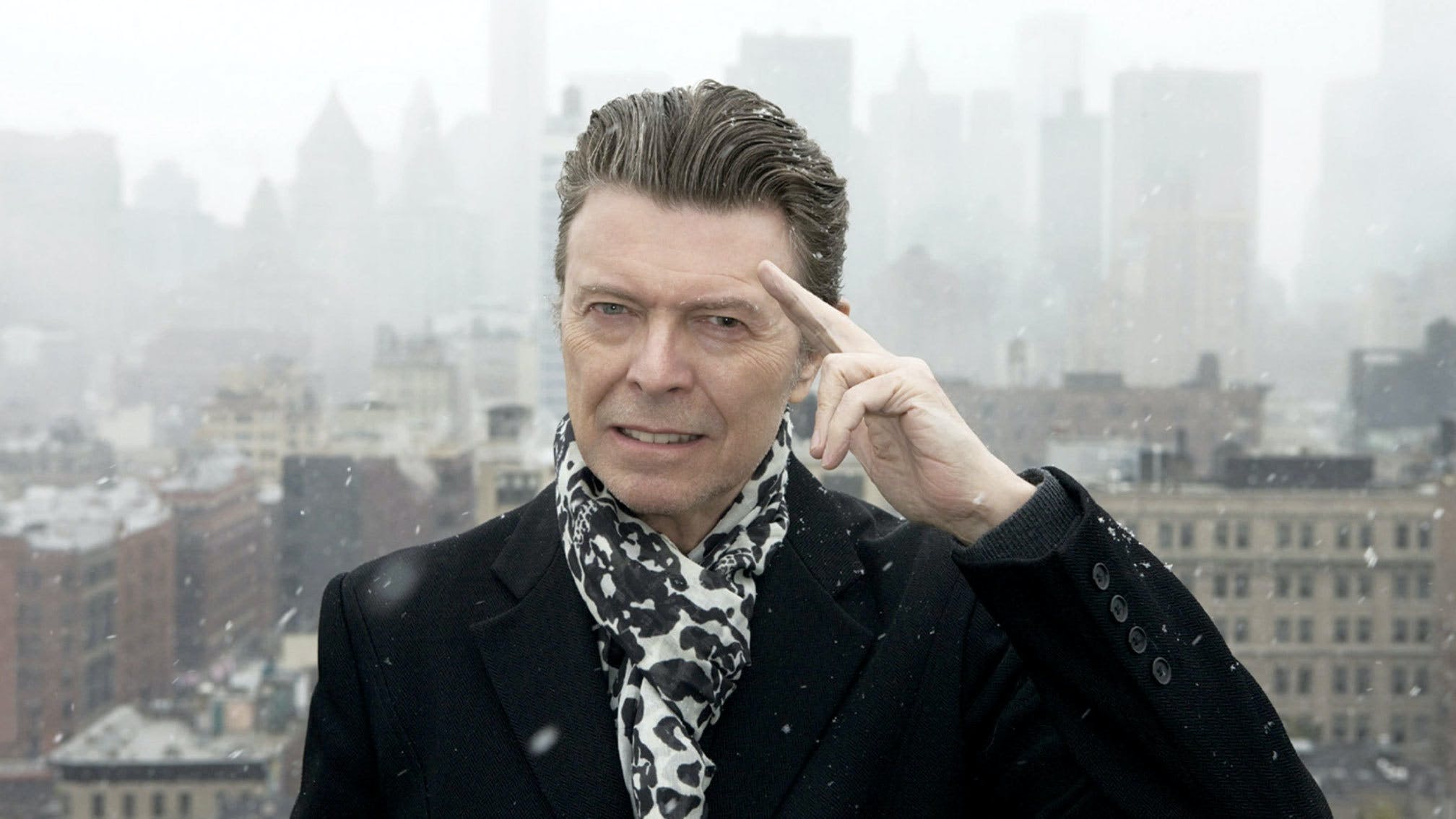 The simple fact is that your favourite band were influenced in some way by David Bowie. Of course, we have no way of knowing who that band is, and that band may not even know themselves, but nonetheless the statement holds emphatically true. Whether it’s glam rock, punk, goth, industrial or metal, the man born David Robert Jones on January 8, 1947 had a hand in shaping everyone’s sound.

‘Oh, but I like Slayer,’ you may argue; well, guess what? Dave Lombardo was a fan. As was Ozzy Osbourne. And Orange Goblin. And Sepultura. And Megadeth. Anarcho-punks Crass were even named after a line from one of his songs – ‘The kids were just crass,’ from Ziggy Stardust. The Sex Pistols were fans, too.

We could go on. And on. But let’s not. Instead, to mark his birthday – and the anniversary of his death on January 10, 2016 – here’s just a small sample of the many bands who have covered the great man’s songs.

Okay, so technically this is a remix and not cover, although Trent Reznor’s vocals can be heard on the chorus, and Nine Inch Nails have played the track live on at least 70 occasions over the last decade. In fact, Bowie himself stated that it was “not just a remix, but almost an album piece in itself,” and that he was “absolutely knocked out” by what Trent had done. Touring extensively together in ’95 and ’96, the pair became good friends, Bowie even helping the NIN frontman with his sobriety. The industrial titans have also covered Bowie’s I Can’t Give Everything Away. Safe to say they’re big fans.

It was literally the day after Lemmy’s funeral that David Bowie passed, and while the picture of them hanging out together turned out to have been a fake, it doesn’t get much more real than this magnificent cover of Heroes. Recorded during the Bad Magic sessions and released posthumously on the Under Cover album, it made Motörhead’s setlist just once – June 23, 2015, in Luxembourg, to be precise – but the video was shown ‘live’ at Wacken in 2017, with thousands of fans singing along. A brilliant reminder of why Lemmy and Bowie were both legends, and, yes, heroes.

Nirvana – The Man Who Sold The World

“I was simply blown away when I found that Kurt Cobain liked my work, and have always wanted to talk to him about his reasons for covering The Man Who Sold The World,” said Bowie of this cover that first aired on the MTV Unplugged series in 1993. “It was a good, straight-forward rendition,” he continued, “and somehow sounded very honest.” Indeed, such was the impact of the Nirvana cover that many younger fans thought it was an original and that Bowie’s version was the cover. Understandably, the Starman was rather less impressed with this. “I’d think, ‘Fuck off, you little tosser,’” he said. Kurt was three years old when the song was written.

My Chemical Romance and The Used – Under Pressure

Following Nirvana’s Bowie cover, we were going to keep the ball rolling with Foo Fighters’ version of Under Pressure, co-written by Bowie and Queen in 1981, and aired live by Dave Grohl and co. nearly 200 times since 2006. Instead, we stumbled across this surprisingly great joint effort by My Chemical Romance and The Used from 2005, which was recorded for the tsunami relief fund, and has since featured as a bonus track on the latter’s In Love And Death album. Admittedly, it doesn’t come close to the original – this is Queen and Bowie, after all – but Gerard Way and Bert McCracken’s vocals complement each other rather well, and, hey, it’s for a good cause.

Imagine your debut album attracting the attention of the Starman himself, who then invites you out on tour, becomes a dear friend, collaborates on your second album, and then further invites you to perform at his 50th birthday celebration at Madison Square Garden! Oh, and then performs a few live special guest appearances, including the BRIT Awards in 1999. Such was the case for Placebo, so it’s only right and proper that they should pay homage to the fella with a cover of the brilliant Five Years, the opening track from 1972’s The Rise And Fall Of Ziggy Stardust And The Spiders From Mars album.

Speaking of Ziggy Stardust, goth legends Bauhaus reached number 15 in the charts with their take on the song in 1982, later meeting Bowie on the set of The Hunger movie. “To say that we were excited was somewhat of an understatement,” recalled drummer Kevin Haskins, adding that Bowie’s 1972 performance of Starman on Top Of The Pops was “a significant and profound turning point in our lives”. Indeed, it’s not unreasonable to suggest that without Bowie’s influence there would be no Bauhaus; on top of that, frontman Peter Murphy has also since covered Moonage Daydream and Rock N Roll Suicide.

Cock-sock wearing LA rockers the Red Hot Chili Peppers have never been shy of playing a cover or two in their time, but there are few artists they’ve covered as much as Bowie. Seriously... Sound And Vision, What In The World, Warszawa, Heroes, All The Young Dudes, Andy Warhol , Cracked Actor, Five Years, Lady Grinning Soul, Starman, The Bewlay Brothers … it seems like there’s not many songs they haven’t played. But let’s go with Suffragette City for no other reason than it sounds good, a nice rocking version. Interestingly, there is also an Alice In Chains demo of the song from 1989. Not to mention versions by Turbonegro, Warrant, Green Day, Poison, and the UK Subs!

As we’ve just mentioned, Norwegian nutters Turbonegro also recorded a version of Suffragette City, which appeared as a bonus track on 1998’s Apocalypse Dudes album. But since we’ve just done that song, let’s go with this live offering of 1974 classic Rebel Rebel instead. Alas, despite airing the song at several shows, the best we could find was this short clip, but in many ways it’s the perfect tune for a bunch of make-up-wearing, glam-punk weirdos, the lyrics seemingly written just for them (yeah, Bowie probably had a time machine). ‘You’ve got your mother in a whirl, ’cause she’s not sure if you’re a boy or a girl.’ Or how about, ‘You love bands when they’re playing hard. You want more and you want it fast’? Yup, perfect.

Aside from a version of this song by Canadian astronaut commander Chris Hadfield, literally recorded in space, aboard the International Space Station, arguably the best-known cover is by The Smashing Pumpkins. But let’s be honest, clocking in at over a minute longer than the original, it is, to these ears, a ‘Marmite’ rendition that you’ll either love or hate. So, let’s go, instead, with Florida glam metal outfit Saigon Kick and their rather splendid offering from the Water album of 1993. Granted, it doesn’t bring anything new to the table, but it’s a necessary reminder that Bowie was an originator glam rock and had a massive influence on the genre.

Perhaps not surprisingly, when The Melvins decided to pay tribute to Bowie – on a 2014 EP cunningly titled A Tribute To David Bowie – they steered away from the many obvious choices and went with the eponymous 10-minute title-track from his 10th studio album, then made it a minute longer and vaguely unlistenable. To be fair, this was the B-side and the A-side Breaking Glass is a little more conventional, but somehow, we get the feeling that Bowie would have approved more of the former…

Remember when St. Vincent and Dave Grohl covered Nine Inch Nails’ Piggy back in 2020? It’s now available everywhere digitally – so get it in your ears immediately.

God is dead, we’re told, but Trent Reznor isn’t and he’s delivering the best shows of his life…

My Chemical Romance, the original Misfits (performing Walk Among Us in full) and Nine Inch Nails will top the bill at this year’s long-awaited Riot Fest.

Halsey: Watch the making of If I Can’t Have Love, I Want Power

Halsey has shared an amazingly insightful look into both the If I Can’t Have Love, I Want Power album and film – featuring the most brilliantly wholesome reaction to being complimented by Nine Inch Nails’ Trent Reznor.