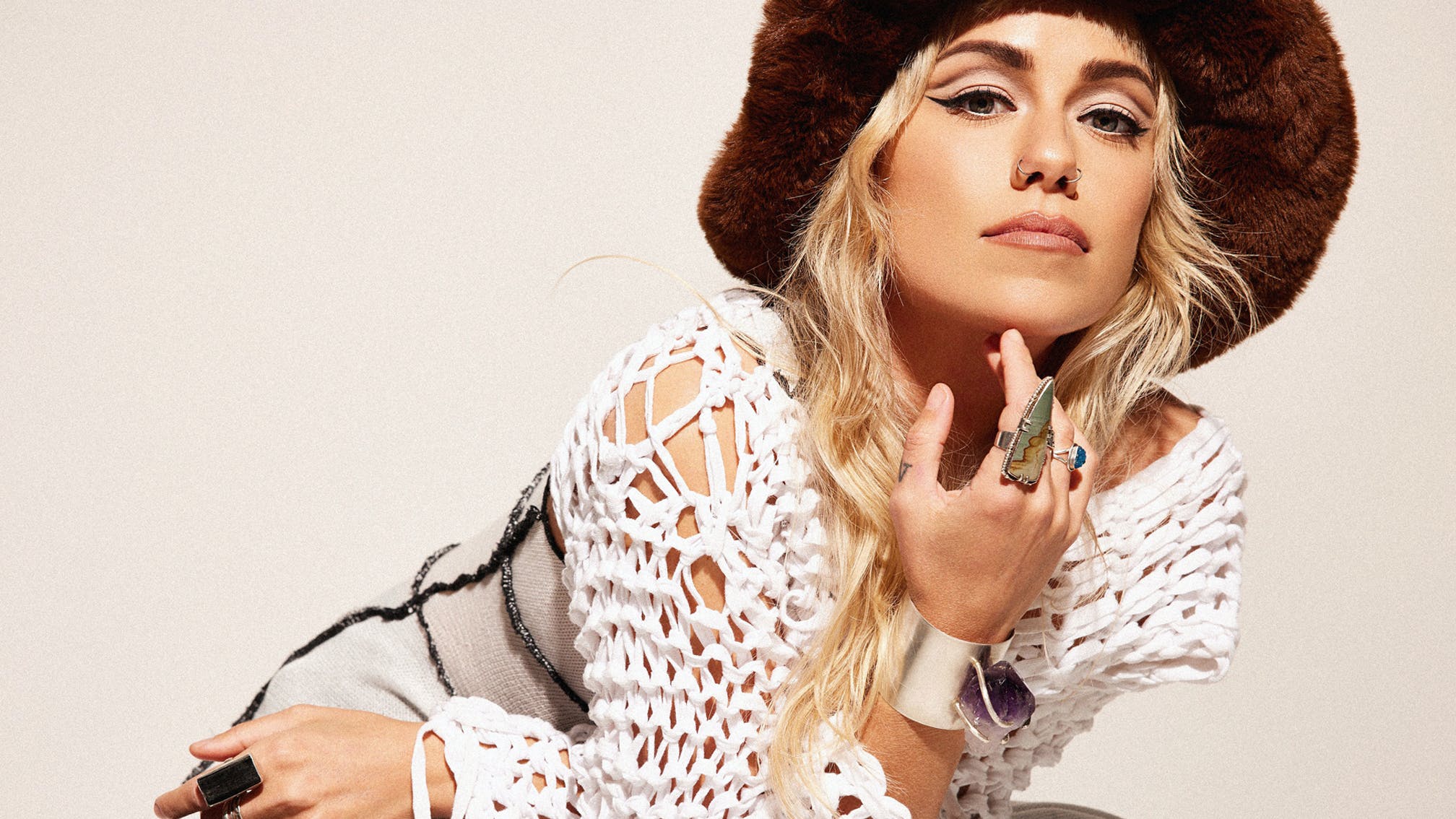 Following a long-running hiatus, Tonight Alive’s Jenna McDougall made a surprise return online last month. The Aussie singer-songwriter – known for dodging social media – made a hit-and-run tweet teasing new music. The news, of course, left plenty of us in a tailspin, frantically trying to find out more. After all, the singer seemingly disappeared into the night after 2018 following Tonight Alive’s departure. However, on the record, the band issued a statement declaring the break was to “address and prioritise our mental and physical health”. After a gruelling routine of tours, it was time the Sydney collective took some time apart. Departing with an on-brand Thank You & Goodnight vibe, the pop-punks bid farewell – a reality that even they weren’t aware was coming: “No-one knew it was really our last [tour] at that time,” Jenna tells Kerrang! today. “We weren't meant to know. We didn't know we're going on hiatus at that point.”

Now, debuting a new look – an edgy all-blonde mullet – and a refreshingly energised new sound, Jenna reveals her whirlwind return was only a “matter of time”. As the singer embarked on an unscheduled healing hiatus, she reconnected with her roots and let the buzz of inspiration lead her back to music. “I always felt the days away from stage and studio were numbered,” she reflects. “It was really refreshing and I needed change, but I'm glad to be back.”

After rehashing what had passed (the “big friction”, as she labels it), Jenna found herself adamantly trying to overcome a forced want for a new direction. “I went through a struggle of trying to draw the new path out of myself when it wasn't ready,” she explains. “There's trusting the process and allowing [personal] development to happen at its own rate. I definitely think that affected the way I've seen how the songs sound. My general energy at the moment is greatly influenced by having to surrender and take things as they come in.”

Now, Jenna is gearing up for a remarkable comeback under the high-energy experimental name, Hevenshe. What began as a long-awaited passion project quickly snowballed into something more. And, with a huge amount of songs already under her sleeve (and we mean a lot), plus plenty of eager plans, we caught up with Jenna to hear more about her big ambitions…

Hey Jenna, it’s been a while! What exactly have you been up to since Tonight Alive went on hiatus?
“Two of my three years away were in a heavy lockdown in Melbourne, Australia, so I started to develop a personal life and a social life that I didn't have while being on tour full-time. I spent a lot of time in nature and I've taken up a new spiritual path and study in Bhakti yoga and Krishna consciousness, which is a big part of my life now.”

You’ve just launched your debut solo project, Hevenshe. How long has that been in the making?
“The very first song was written in 2018 when Tonight Alive had just done Warped Tour. So the seeds of that started to appear quite a few years ago, from about 2020 to once we went into hard lockdown. It became second nature to begin expressing again and to continue writing in my journal. So Hevenshe is kind of a pandemic project that was always gonna happen, but I finally got the time during the last couple of years.”

Where did the name Hevenshe come from, and what does it mean to you?
“The name sort of dawned upon me. I've always been attracted to divinity but not understanding what it meant to have a connection to something spiritual. My attraction to the divine has influenced the name and breakdown of "heaven" and "she" as in the divine feminine, which is how I would aspire to develop my soul, my higher self and my higher potential. So, that's how I frame Hevenshe for me.”

Your name has been so regularly attached to a band. Did you feel nervous about kicking off a solo project?
“A lot of what I've delivered in the past has come from a very essential part of me. I think a lot of Tonight Alive fans are connected to something that can't be removed from me. It's unique to the writing, partnership, our sound and the culture around the band. But I don't feel that I'm removing anything essential to Tonight Alive whilst I'm doing Hevenshe. I think Tonight Alive fans are gonna get this and we've always had really genuine fans that connected with the music. It was never a superficial connection to what we were doing. So, all that to say, I haven't felt nervous about this and it's not in an overconfident way. I'm doing something true to myself and that's become more important to me than anything else at this time.”

Your new single No One Will Ever Love You is out now. Do you remember the moment you were inspired to write it?
“I started listening to more Australian artists who had a bit more of an influence on what I'm doing now, which is really refreshing because there wasn't much Australian music that I was connecting with as a teenager. I feel like this song is the beginning of me accepting myself and finding myself.”

This is the first time you’ll be sharing a track that only you have written. Did that feel like an important moment as an artist?
“Yes, it feels really important! I always wanted something that was my own. It's really a beautiful thing to have shared experiences, shared projects and aspirations and things, but I felt that need to prove to myself that I can create, express and make decisions solely from my instinct.”

Can you explain the lyric: ‘I wish I could give your my heart / Just so you could have everything you want.’ As a writer and an individual, do you often feel like you’re committed to giving a lot of yourself away?
“It's interesting, because that's become such an exploitable part of being an artist in giving so much of yourself and sharing so much of your personal life. I think people do that because it creates an attachment from your audience. I don't feel the pressure to overshare. If anything – and I was thinking about this today – with writing lyrics, it's such a relief to be super-duper honest. That lyric is not directed at the audience but at an ex-partner. It’s touching on the unrequited love saying that I want you to be happy, but I can't be the one to do that.”

You mention themes of hope, love and peace quite regularly in this single. From a post-Limitless era, have these principles shaped a lot of your life lately?
“That's a beautiful question; I want to give you something as beautiful [as an answer]. I think you're right on. I hadn't really thought about that. If you think about being someone's well-wisher and how are we supposed to express that, we want someone to be happy and healthy on a daily basis. Peace, love and hope too, definitely.”

Your new sound has quite a nod to early Tonight Alive. Do you feel like that band’s influence has stuck with you through your solo venture?
“I don't think I could ever remove myself from that because that's where I've developed my intuition as an artist. My ability comes through all of those songs and hours of practising. It's one of those things that it's in the DNA of me as an artist. I'm currently listening to different things, so we're gonna get a mix, but I'm never going to run from what Tonight Alive was. I'm excited to make more music with Tonight Alive and I get excited by what we've done. I'm excited to create more of it and see how we're going to develop in the future.”

“A new song will be coming out after No One Will Ever Love You called Trying Not To Feel. I'm very excited about the story of that song because it's about the last two years and it's the most time-relevant song I've probably written. I haven't really written anything that's on a social experience that everyone has shared before. I love the song. I'm really excited about it and it's influenced by Bob Dylan. It's about the frustration of having a total lack of direction during lockdown and there'll be a handful of other songs with a band, a keyboardist and myself on guitar, so it's going to be a bit of a mixed performance and it's really special. I'm inviting my family, former co-workers and bands that Tonight Alive started out supporting.”

Watch the lovely video for Hevenshe’s new single The Blessing, which Jenna McDougall describes as the soundtrack to her “ultimate fantasy” of “headlining a festival on a rainy night”.

Watch the new visualiser for Hevenshe’s latest track These Days, inspired by a feeling of “impermanence on everything around me”.