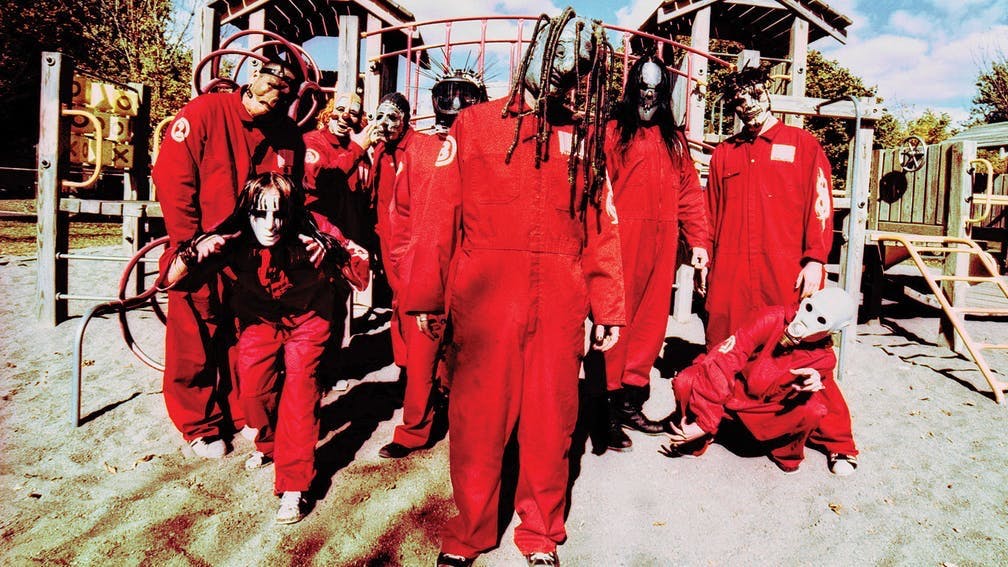 I remember when I first heard Slipknot. It was the year 2000, I had recently started high school, and post-3pm I’d go to my friend’s house to watch MTV2 for hours on end. It didn’t matter who came on, it was a new, fresh, real sound that we’d never heard before. But there was always one video that stuck out to me: Slipknot’s Wait And Bleed. The swarming crowd being blasted by a firehose, the creepy masks, the band’s complete disregard for their own safety and potent anarchism, it was like staring into a new world – a world I wanted to be a part of.

Prior to this, I’d been living on a diet of 5ive, Backstreet Boys, TLC and whatever Now That’s What I Call Music compilations could throw at me, but Slipknot changed all that. Sure, the videos for Linkin Park’s One Step Closer and Papa Roach’s Last Resort were fun, but nothing hit me in the gut (or mind) like seeing Slipknot performing live onscreen.

And before long, I was obsessed. I taped a copy of the Slipknot debut from a mate’s CD (killing the industry, I know), I bought a super-baggy Slipknot hoodie that still doesn’t really fit, and would watch their Welcome To Our Neighborhood home video constantly. Who were these guys? Why were there nine of them? Why was I so drawn to screaming rude words at the top of my lungs?

It helped that I was a particularly moody teenager, probably due to some rather sad events early in life, and now it was all coming to the fore in a big ball of hormones and nu-metal. Suddenly I felt a kinship with these nine maniacs from the other side of the world. Songs like (sic), Eyeless and Surfacing connected on a deeper, more meaningful level than anything I’d ever heard before. It felt like I’d found out a great secret – that heavy music exists. I knew about rock music, sure, but I was one of the lucky few who knew about Slipknot and they were mine.

Well, until their next album, when they exploded.

My friends and I had known about Iowa coming for ages. We’d read all about it in Kerrang!, the posters from which were filling my walls, and we knew it was going to change our lives. Sadly, being 12 years old we didn’t really have the £15 necessary for a new CD on release day, so I had to wait to be handed a copied version with jank artwork (again, killing the industry, sorry). When I first heard those gnarled screams of (515) I thought my CD was broken. ‘What the hell is this juttering mess?’ So I skipped straight into People = Shit and it blew me away.

I maintain that Iowa is the best Slipknot record, and again it became a go-to for me, insisting I live in a cloud of gloom like a stereotypical teenager. I even changed my MSN name to the opening lyrics of Disasterpiece and received some rather weird looks at school the next day. Rightly so, looking back. But now I had two favourite records, and this one was even heavier.

Of course, I’d sit and watch MTV2 and Kerrang! TV for hours waiting for the My Plague and Left Behind videos, but it was tracks like Everything Ends and The Heretic Anthem that I truly loved – there’s something so alluring to a teenage greebo about the number 666 in a song, and the opening words to Everything Ends, ‘You are wrong, fucked, and overrated / I think I’m gonna be sick and it’s your fault,’ were how (I at least thought) I felt about the world around me. Again, putting these words down makes my life sound much more grim than it actually was. I’m pretty sure I was just searching for something to be moody about. Kids, eh?

By the time Vol. 3: (The Subliminal Verses) was released, I was able to get a copy on release day. I sat with my headphones on in the back of the car, listening intently and reading the lyric sheet, learning all the words. Fun fact: The Blister Exists was the first time I had ever heard the word ‘archaic’. Even on a holiday to Majorca I remained glued to my CD player, listening to Vol. 3 on repeat instead of going in the swimming pool or exploring; I was more than happy to explore the music of a heavy-duty Iowan killing machine.

With each Slipknot record, I have vivid memories about where I was at the time. They form sensory milestones in my life. Just as Vol. 3 conjures images of that Spanish sun lounger, All Hope Is Gone is tied to long drives down a particular road, blasting out my car speakers at a ludicrous volume.

All Hope Is Gone was also when I finally saw Slipknot live. December 12, 2008, Sheffield Arena. I queued in the snow for five hours and made it onto the second row, and it is probably still the best show I have ever seen. It’s worth pointing out that I would have been on the front row if my mate hadn’t decided he needed the loo as soon as we got in. Thanks again, Oli, if you’re reading this.

I had waited eight years to see these nine men up close, and I could practically touch them. Stood on the left in front of percussionist Chris Fehn, I could see my hero Corey Taylor in the flesh, barking out the words to Surfacing, Liberate and Get This with me, having learned them by heart in what felt like a lifetime ago. These songs had been such an important part of my adolescence and now I was singing them into the face of the man who wrote them.

Fast-forward six years and I’m working at a music magazine, and on August 1, 2014, the ’Knot returned with The Negative One. I sat, glued to my desk, listening on repeat instead of actually getting any work done for about an hour. Subsequent album .5: The Gray Chapter changed the way I connected with Slipknot yet again.

I was lucky enough to see the band perform live six times on that album cycle, which still blows my mind, and I was able to meet and interview Corey Taylor, Clown and Jim Root. Just FYI: Meeting Clown in full mask and boiler suit while he’s carrying a baseball bat will shit you up. And despite these once-superheroes now being tangible beings that I have photos with, it never numbed the excitement. Even now, having been fortunate enough to interview various members of Slipknot (including former drummer Joey Jordison), that original teenage enthusiasm hasn’t gone away. These men have done more for my music taste and love of alternative culture than anyone else.

Few bands can still create that level of fire after all these years. Seeing Slipknot at Download reaffirmed why they have been my favourite band for the past 20 years. To me, they are unbeatable. They were my entry into heavy music and they have stuck with me on this journey ever since. Maggot for life.