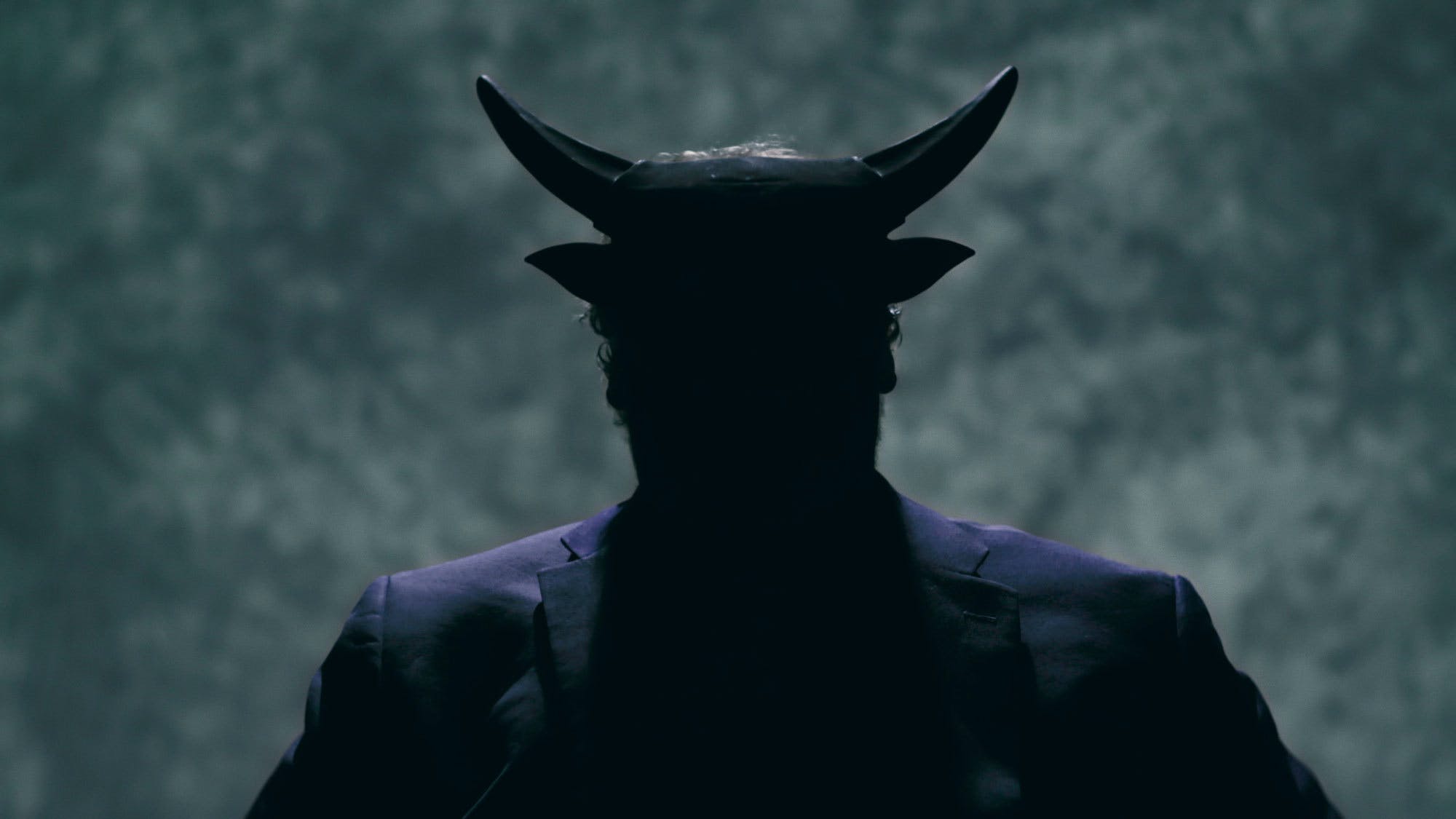 What do you think of when you think of Satanism? It’s probably not litter picking, after-school clubs and grassroots political activism, but The Satanic Temple manages to subvert preconceptions as easily as it draws apoplectic outrage and downright hatred from the American media and Christian right.

Hail Satan? is a new documentary that shines a light on the extraordinary rise of this officially recognised and often surprising religion. Its representatives are deadpan, media-savvy and understand the shock tactic value of a good stunt. The film follows them as, amongst other activities, they attempt to stage a very public Black Mass and disrupt anti-abortion rallies with adult baby performance artists.

As Norwegian academic Jesper Aagaard Petersen says in the film, “The most interesting thing about Satanism is that people willingly choose to identify with an adversarial being… It’s a founding aspect of Satanism that you troll people. That’s the original troll isn’t it?”

READ THIS: 12 of the most uplifting songs about Satan

One important aspect of this new breed of Satanists is that they don’t believe in, much less worship, a literal supernatural entity called Satan. During the aborted Black Mass in Boston, TST co-founder and spokesman Lucien Greaves describes the event as “a declaration of independence from superstition”.

He adds, “Essentially we view Satan as a symbolic embodiment of the ultimate rebel against tyranny.”

For all their media manipulation and staged events, Hail Satan? also reveals a loose network of disparate people with some deeply held common beliefs. When they launch a legal campaign to get an 8.5 foot tall bronze statue of a Baphomet erected in front of the Arkansas State Capitol building, it’s not just because it looks cool – even if its torso was modelled on Iggy Pop. It’s to protest and highlight the hypocrisy of allowing a Ten Commandments monument in the same place, in a country that's supposed to guarantee pluralism and the separation of church and state.

We caught up with Hail Satan? director Penny Lane to find out what drew her to cover the story of this colourful cast of agitators…

Why did you decide The Satanic Temple would make a good subject for a documentary?
“I thought it would be a good subject because of the headline quality of what they were doing. The news stories that I saw were so immediately engaging and funny, but that’s not the end because you want to be able to do something with people once you have their attention. As soon as I started looking into The Satanic Temple, every single thing I learned just made the story more interesting and more confusing and more provocative.”

What’s the biggest misconception you think the film might help to dispel?
“For me the biggest misconception the film helped to dispel was the idea that you could ask the question, ‘Well, are they kidding or are they serious?’ You think the answer to that has to be ‘either/or’ but really it’s both. If you say, ‘Well, here they are joking and having fun, that must mean they’re not really Satanists,’ that is a misconception. It’s to do with what a Satanist is. You can have fun and troll people. So that was the biggest ‘A-ha!’ moment for me. The way that I was framing that question showed that I didn’t know anything about Satanism at all.”

Do you think a lot of people are surprised to find they don’t worship a supernatural entity?
“Yeah, I think that’s probably a better answer for most people regarding the biggest misconception (laughs). That a Satanist is somebody that worships Satan. As far as we know there has never really been any organised groups of people who ‘worship Satan’. It’s just a myth, they don’t worship Satan, but they do venerate the symbol of Satan. They organise their religion around this fictional character in a way that pays homage to what they think that fictional character has to teach the rest of us.”

The film showed the local punk scene mobilising to try to make the Black Mass happen in Boston. Does that Satanic position of the 'adversary' draw in a lot of people from counter-cultures and alternative lifestyles?
“Oh, absolutely. It makes sense too because if you’re the kind of person who doesn’t want to fit in with the crowd, but wants to be treated like a human being, it’s the kind of thing you can relate to. Because if you’re dressing differently to everyone else or you have religious or political views that put you at odds with the rest of your community, it very much lends itself to people who understand what that feels like and what that position in society is.

“It bothers me when people watch the film and say, ‘Oh, these Satanists, they’re just like you and me.’ And I’m like, ‘No, they’re fucking not actually.' Most of us spend our lives really just trying to get along with other people, which is fine. But the social role that they play of 'outsider' and hated, being the lightning rod for everyone else’s prejudices and fears, is a very specific role that doesn’t get a lot of kudos. People aren’t saying, ‘Thank you so much for offending everyone and scaring my grandmother’, but they definitely play this provocative outsider role and it’s very valuable. I think we need people like that.”

There appear to be a lot of metal fans drawn to the Temple as well. Is there an element of, ‘Come for the aesthetic, stay for the philosophy’?
“Yes, I think that’s very well put and I think about that a lot. Come for the shock value and the middle finger to the establishment. Someone might have drawn a pentagram on their high school textbook, but that doesn’t make them a Satanist. Plenty of people dabble in Satanic imagery because it’s so provocative and it is so powerful that it can be fun. But yeah, the people who stick around do so because they find a universe of meaning and a social world that does something very important for them.”

READ THIS: 9 non-metal artists channelling the power of Satan

The film captures a lot of hate directed towards the temple. Was there any point when you felt in fear for your own safety?
“No, and that was one of the few times in my life that I was happy nobody pays any attention to documentary film directors! People didn’t even notice that I was there, so I never felt a lack of safety. But I did feel plenty of fear for my subjects in a variety of situations.”

Like when Lucien was putting on a bullet-proof vest and they were discussing the possibility of shooters?
“Yes, but again there was no way that some angry person’s target was going to be a cameraperson. It was obvious that the hate was being directed towards the Satanic Temple and specifically towards Lucien. I was very, very scared, but it was a fear that something was going to happen to him. I’ve had my fair share of random misspelled hate mail, but even that is not a significant amount.”

The film brings in different elements such as the anti-abortion bills and trans rights. Do you think the Temple is part of a wider culture war going on right now?
“I think the reason that the Satanic Temple is so interesting to everyone, even though not everyone is a Satanist or has any interest in being a Satanist, is that they are intervening in this larger culture war in a way that is really novel and bringing new energy to various subjects that we’re all familiar with. Making this film really made me see how important evangelical Christianity is in the culture war in the United States. Everywhere I looked I saw people who are trying to restrict people’s rights in various ways – relating to sex, largely. It’s all about sex in the end (laughs).”

You received your Satanic Temple membership card after making the film, so presumably you agree with the Temple’s Tenets?
“Oh absolutely. I got the membership card because I’m such a supporter of their work. I do agree with their tenets and I spent a lot of time trying to figure out if I was a Satanist. I wasn’t sure for a long time if I had found a religion. Ultimately I decided that I hadn’t, that I’m not a Satanist but I support and appreciate the work of the Satanists. Even leaving out the activism work that the Satanic Temple does, I appreciate the philosophical nature of the religion itself. I find it very well thought through and very intelligent.

“It’s a religion that actually makes sense in modernity, which is more than I can say for any other religion I’ve heard of. It actually makes sense to me that you would say religion is not about literal truth. Religion to me is obviously about the value of art and fiction, culture and music, ritual and community, coming together and feeling the ecstasy of experiencing the world together in a ritualised way. That’s the value of religion right there, but to acknowledge right at the beginning that this is fiction, and not do this intellectually insulting thing of trying to convince people that we believe that the world was created in seven days. If you were starting from scratch in the 21st century, that’s the kind of religion you would come up with.”

Do you think The Satanic Temple will be a force for change going forward?
“It’s already had an impact on the world that can’t be reversed, in the sense that they’ve really helped to change the culture and dialogue around a lot of things. But as to whether The Satanic Temple as an institution will be around into the future, it entirely depends on the willingness of a small number of people to continue doing a shitload of unpaid labour for a long time. It really does depend on a few people doing a lot of hard work and being a Satanist is pretty thankless work.”

How Linkin Park’s Meteora fought the odds and won

We look back on how Linkin Park’s second album Meteora took the world by storm… and surprise.

Vended will be returning to our shores in just a few months’ time, confirming four headline shows in the UK this June.