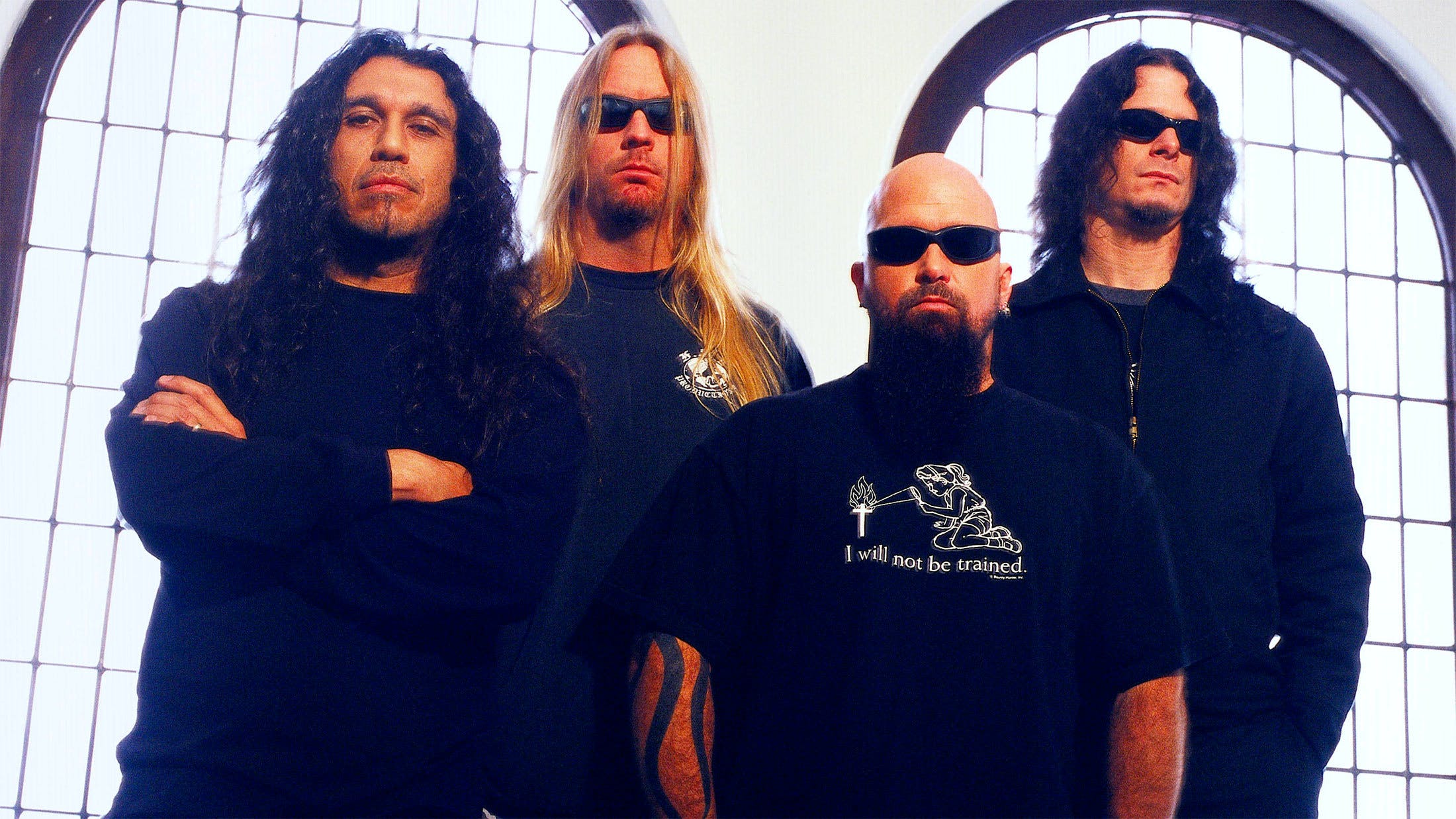 In the summer of 2001, Slayer took to the road in the United States as part of the Extreme Steel tour with Pantera. On a bill that also featured Morbid Angel, Static-X and Skrape, one day Kerry King played the Texan cowboys from hell a number of songs from his group’s as-yet-untitled new album. Responding to a line from the track Disciple, Kerry was told, “Man, God Hates All would look [great on] a shirt.” It would, he agreed, but it would work better still as the title for Slayer’s ninth studio LP.

“How can you look at the world and think God doesn’t hate us?” wondered the guitarist. Kerry King was once asked to nominate his own superpower and answered that he would like to be able to set churches ablaze simply by walking past them. In Slayer World, this made him the band’s most qualified theologian.

God appeared to agree. God Hates Us All was released on September 11, 2001, mere hours before passenger planes were flown into the World Trade Center and the Pentagon, the most Slayer-esque act of the modern age. Five years later, these atrocities would inspire Jihad, the band’s finest song of the 21st century. They would also throw the world into a state of flux for the next decade and more.

Ahead of the curve, the world of heavy music had been in turmoil for a number of years. The advent of nu-metal in the middle years of the 1990s saw the sound and look of metal change in remarkable and pliant ways. Tunings went down and guitar solos were eschewed. Long hair was no longer de rigueur. Baseball caps and vivid oversized sportswear became the wardrobe of the choice.

In truth, Slayer had endured a difficult decade anyway. Leaving aside the Seasons In The Abyss album, from 1990, the final 10 years of the 20th century had seen the band unveil just two further of albums of original material. Caught in a nu-metal storm, Diabolus In Musica, from 1998, provided a nod to these changing times. The Californian quartet’s most adventurous release – never again would they attempt to write songs as innovative as Stain Of Mind and Wicked – and by far their most intriguing, Slayer’s attempts to park their tank on a new cutting-edge lacked just one thing: an identity.

In this, the group were not alone. Iron Maiden slogged through a swathe of the 1990s with singer Blaze Bayley, a solid presence who lacked the charisma of his predecessor Bruce Dickinson. Even market leaders Metallica spent the second half of the decade attempting to escape the shadow of their 31-million selling Black Album. Between 1996 and 1999, the San Franciscans released four albums, only one of which – S&M – was met with anything approaching universal acclaim. The group did, though, start the 21st century in reassuring style, with the convincing I Disappear, from the 2000 summer blockbuster Mission: Impossible 2.

In the fullness of time, it would take Metallica a further eight years to re-establish their identity with the slightly-too-comfortable Death Magnetic album. Iron Maiden exorcised their recent past with ruthless efficiency by re-recruiting Bruce Dickinson and releasing Brave New World, in 2000, an LP that reassured listeners that normal service had been resumed. But it was Slayer who returned from their brief paddle into uncharted waters with the greatest sense of urgency and violent panache.

As an album, God Hates Us All reassured its constituents that the band had come home to the thrash-tastic turf that would not exist without them. More than this, over the course of a further three studio albums this stall would budge not an inch in the years that elapsed until the group called it a night in 2019. In his own blunt style, Kerry King explained that, “I want us to be the AC/DC of thrash. I want people to know exactly what they’re going to get when they hear us.”

Which is not to say that the band’s first album of the new century was merely an exercise in nostalgia. Recorded in Vancouver, God Hates Us All was produced by Matt Hyde, whose subsequent credits would include Deftones and Parkway Drive. Accompanying this modern sound were lyrics that eschewed the Satanic and occult themes with which the group had established their identity in years past with songs such as Altar Of Sacrifice, Spill The Blood, and Born Of Fire. In its own quiet way, this too was a nod to metal’s unlikely march toward self-examination.

“There’s no Satanic or supernatural elements to [the album],” Kerry King explained. “It’s just more about things that people can relate to. All our albums are angry, but this one is really pissed-off because it’s inward looking. I’m usually the Dungeons & Dragons spooky dude. On this record I made a conscious decision not to do that. I wanted to keep our dark themes, but also to write stuff that people can relate to. I tried to think about what pisses me off and why and how people could relate to that, rather than saying, ‘The Devil’s over there fucking your mother’, or something.”

Accompanied by a crisp music video for the song Bloodline – the band’s first since Dittohead, seven years earlier – God Hates Us All is not Slayer’s best album. But it is one of their most assured, and one which cemented their contemporary relevance to a new generation of metalhead. In 1991, the group capped off their first 10 years of active service with a live album titled Decade Of Aggression; yet the ’90s could have been called Decade Of Relative Uncertainty. But after years of laziness – only one track, the supreme Disorder, featuring Ice-T, breached the silence spanning 1990 and 1994 – and excursions such as the thrilling but contextually misguided punk-covers set Undisputed Attitude (1996), once again Slayer were back in a game of their own creation.

On the day that God Hates Us All was released, the Californians planned to fly to Europe to embark on the Tattoo The Planet tour, co-headlined by Pantera. Stranded in Dublin following the fall of the Twin Towers, the Texan group embarked on a row that would break their band apart forever. One week later, Kerry King and co. crossed the Atlantic and topped the bill unaided. In doing so, once more they stood alone as the kings of very, very, very heavy metal.