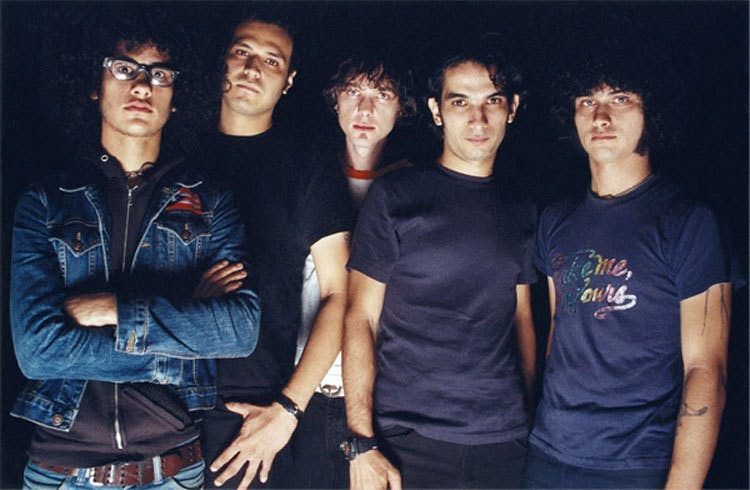 So, At The Drive-In are back. Again. A reunion of a reunion. How excited are you? Last time they got back together, in 2012, the return of the El Paso post-hardcore magicians was hobbled by the tragic death of guitarist Omar Rodriguez-Lopez’ mother. Onstage, he was understandably distant, leaving many disappointed, although hopefully sympathetic to the situation. But then? It looked like they were gone for good. Ha, wrong. And with 2016’s other big get-back-together, Guns N’ Roses, now confirmed after two decades of denying it would ever happen, we’ve seemingly reached Peak Reunion. Which means peak internet bitchfest about whether said reunions are good/a rip-off/pointless/trampling once-great legacies/proving they’re full of shit for doing it when they said they definitely, never-ever-ever-in-a-million-years-would (hi, Refused). My personal feelings? Reunions are just what happens now: so fucking what?

When Slash and Axl Rose parted ways in 1996, reunions weren’t A Thing. Stuff that happened in the past was dead and gone. “My dad – forget about it. He could ruin a Led Zeppelin reunion concert,” lamented Garth in Wayne’s World II. These things just didn’t happen. Led Zeppelin get back together? Behave. Guns N’ Roses? HA! There ain’t no coming back from that. Slash frequently said in interviews, not that long after, that, “Guns have been offered millions to reform”. Then he chuckled. That settled it.

But how things change. Reunions are What Bands Do now. Form band. Make album. Tour. Have career. Split. Ferment. Reunite. That’s the new career route. Just a year after Slash left Guns, Black Sabbath reconvened in what was one of the biggest events in metal history. Ozzy, Tony, Geezer and Bill, onstage together for the first time since the ’70s. And over the last two decades, dead bands have been resurrected – Faith No More, Rage Against The Machine, System Of A Down – sometimes even before enough time’s passed for their absence to be properly felt (take a bow, Fall Out Boy). Or else there’s been a return of classic members (Bruce Dickinson rejoining Iron Maiden, Judas Priest welcoming Rob Halford back to the helm). Or one or two members resurrecting a band’s name (Possessed, Repulsion, Kyuss Lives!, Pagan Altar, Angel Witch, Black Flag).

Go on, howl with protest. Are these guys ruining their legacy? Are they ripping you off? Only as much as you want them to be. Don’t like it? Don’t go to the show. Don’t pay attention. Sometimes it’s disappointing that a dormant myth of a band gets ruined by a poor showing – black metal fans, remember the Von disaster where they looked like Foo Fighters on slob day and rewrote the songs? – but in the greater number of cases, these bands kill it. Carcass? Damn right. Kiss? Fuck yeah.

Of course people can say what they like. Are bands touring with one original member a rip off? I’ve seen Angel Witch and Possessed with one original member each, and thought they were both killer. Greg Ginn’s Black Flag? Doesn’t smell right to me. There’s no formula to it, either – how come I’m happy to pay to see a quarter of a line-up of Possessed, a band I have an obsessive devotion to, and yet call out Black Flag doing a similar thing (albeit with rip-off allegations flying around) as bullshit? I dunno. There’s no right answer. Reunions are what happens now. All that everyone can agree on now is that reunions are as much a part of being a band as splitting up.

Check out which of these reunited bands appear in our list of the 50 Heaviest Albums Of All Time:

Guns N’ Roses will be headlining the 10th anniversary edition of London’s epic BST Hyde Park in the summer!

Taken from their upcoming Use Your Illusion reissue, Guns N’ Roses’ new version of November Rain is absolutely stunning…

Guns N' Roses' Use Your Illusion double-header will be reissued on CD, vinyl and more later this year.