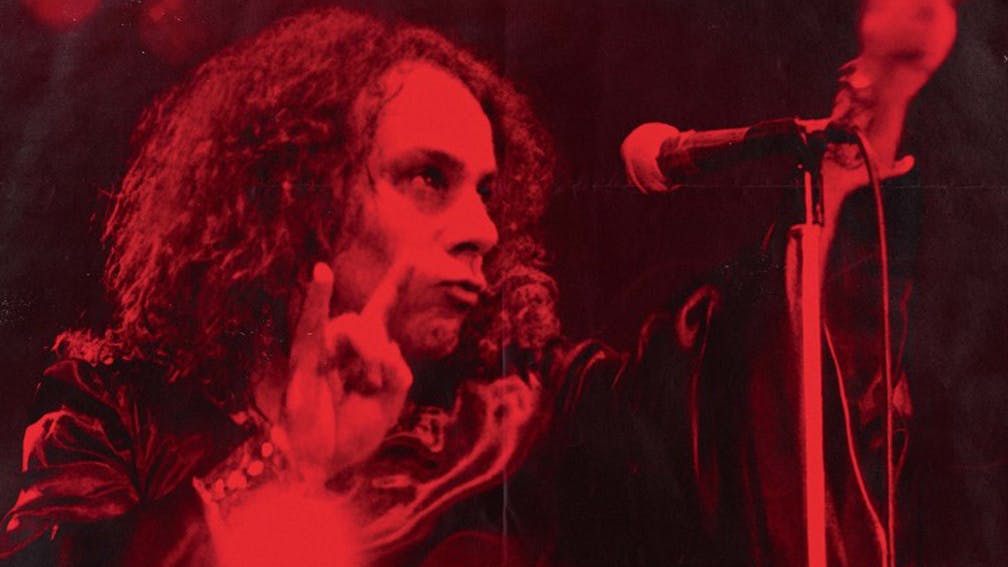 The length of Ronnie James Dio's habit was always there to be seen. By the time he released his first solo album, 1983's Holy Diver, which made him a superstar in his own right, he was already 40 years old. Far from being his first crack of the whip, he'd already found fame twice already fronting Deep Purple guitarist Ritchie Blackmore's Rainbow, and then replacing Ozzy in Black Sabbath. In both cases, his mighty voice and theatrical onstage persona had helped shake the bands' founders out of a rut and reinvigorate them following a period of frustration and malaise.

But before that, he already had knocking-on two decades as a singer and recording artist, with Elf, with Ronnie Dio And the Prophets, and Ronnie And The Red Caps - his first recording with whom was laid down in 1958.

If you know Dio, you already know all this. But perhaps the sheer magnitude of the late, great singer's career can go unappreciated until you see it charted as it is in DIO: Dreamers Never Die. "Before The Beatles," his starting point is noted with some amazement. Metal before there was metal, rock 'n' roll right right from the beginning - it's just one of the ways this documentary produced by his wife Wendy elevates the little man with the biggest voice, and throws into focus just what a unique life and career he had.

Telling his story from schoolboy in the small New York State city of Cortland, to appearing on Texas TV from his hospital bed while undergoing cancer treatment in 2010, this is a largely thorough look at a whole life. Thanks to his long career, a wealth of recorded and largely unseen and heard stuff exists from the early days. In particular, old interview recordings allow Dio to help narrate the film and lift the lid on the events within brilliantly. Meanwhile, figures like Wendy, Black Sabbath's Tony Iommi, Geezer Butler and Bill Ward, singing legend Glenn Hughes, Runaways guitarist Lita Ford, and superfans Seb Bach, Jack Black and Nuclear Assault's Dan Lilker offer their own insights and versions of events.

What's delivered is a portrait of a man with a big heart and ambitions. He didn't like to waste time, and he wasn't into doing anything less than what he thought was right. In Rainbow, his mythical and magical style had, along with Ritchie Blackmore's neoclassical slant, helped make them (and rock itself) a far more splendorous proposition than the heavy blues that preceded them. But in search of a hit in America, Dio was out when Since You Been Gone was put on the table. A similarly uncompromising attitude saw him out of Sabbath after two albums, and finally able to call the shots with a band of his own. In this, he almost did himself out of a banger in Rainbow In The Dark, after drummer Vinnie Appice reveals that the boss hated it so much he didn't want to keep it. Fortunately, he was able to be convinced otherwise for once.

The sadness of the end is that, even in his late 60s, Dio was a man still very much in love with and enthused on music and life. Interviewed immediately after stepping offstage at what would be his final ever performance with Sabbath offshoot Heaven & Hell, he's already looking at what's next, because sitting around at home is boring. When he's in hospital, his calmrefusal to be defeated is as inspiring as it is, ultimately, heartbreaking.

Wendy Dio says this film about her late husband has been "made with love, for Ronnie". Even when topics are less than glorious - the parting of ways with original solo band guitarist Vivian Campbell is told of without varnish - this remains true throughout. For many, Dio the metal hero will be a familiar character, but this is also a film about Dio the man, Dio the husband, Dio the dreamer, Dio the well-read thinker, Dio the sage, Dio the guy who simply wouldn't give up on life. In this, he has been done proud.

Tony Iommi: “Ronnie James Dio gave us a new lease of life, and it also gave us a challenge”

As Black Sabbath reissue their Heaven And Hell and Mob Rules albums, Tony Iommi looks back at the life of the band in the ’80s, the drama of Ronnie James Dio’s voice and lyrics, and what it was like to record in John Lennon’s house…

Watch: YUNGBLUD performs Black Sabbath, Kanye and The 1975 medley in the Live Lounge

From Mike Patton to Iron Maiden: The icons who inspired Zeal & Ardor

Zeal & Ardor’s take on black metal is an eclectic melting pot. But what inspires the broad church of noise? Mainman Manuel Gagneux reveals the musical heroes that guide him…