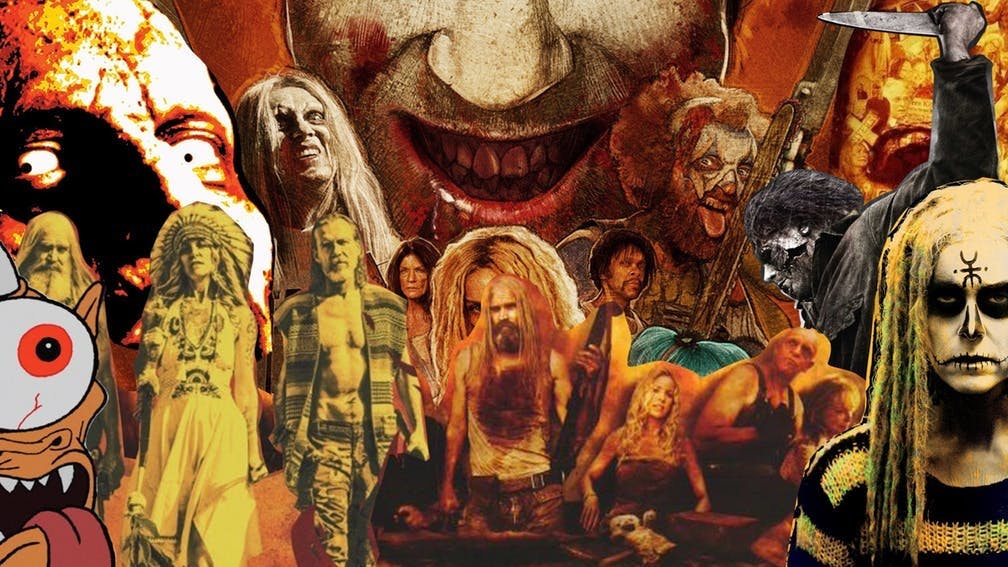 Even though he’s got the kind of musical career that most metal stars would sell their souls to Satan to get, Rob Zombie is to some best known as a pioneering horror director. Bringing together retro grit and unpredictable savagery, Rob’s films surprised and horrified an entire generation, kickstarting a wave of remakes and imitations that your average movie exec never could have predicted. Without Zombie, it’s safe to say the new versions of Dawn Of The Dead, The Texas Chainsaw Massacre, and The Hills Have Eyes would’ve never gotten made.

Last year saw the release of 3 From Hell, Rob’s third movie about the murderous Firefly Family. But where does it fit into the Z Man's canon? We decided to do a definitive ranking of the Zombie’s entire directorial catalog. Just a warning: spoilers ahead.

There are two main problems with Rob Zombie’s remake of John Carpenter’s 1978 genre-definer Halloween. The first is that it’s too explicit — it gives Michael Myers a backstory of abuse that provides motive, Dr. Loomis is in part driven by too-easy lust for fame, and the entire story involves a gritty retro take that doesn’t feel terribly necessary (that Love Hurts scene…oy). The second is that it puts Zombie on a track, forcing him to adhere to a story he loves but didn’t write in the first place. The result is the director’s sense of overkill straining against the cage of a predetermined plot and ultimately falling short of its massive potential (though the numbers say otherwise — Zombie’s Halloween still holds the record for Labor Day box office success).

While Rob’s sequel to his Halloween remake has its own problems, it at the very least gives him more room to do his own thing. The inclusion of Michael Myers’s mother as the keeper of the White Horse of rage feels wonderfully bizarre, and Laurie’s development into a death rocker gives Zombie an opportunity to indulge in his love of The Misfits and Alice Cooper. Still, Halloween II feels kind of unnecessary, and the Texas Chainsaw-esque focus on family in it doubles down a little hard on the Laurie-Michael sibling storyline. Zombie himself has recently said that the films weren’t his favorite to make, telling Bloody Disgusting, “Making Halloween with the Weinsteins was a miserable experience for me…I did do the second one, and I thought, ‘Okay, well the first one was a miserable experience, but it did well, so maybe it’ll be easier the second time?’ It was worse.”

READ THIS: 12 albums where an artist did something unexpected

Rob’s first foray into supernatural horror was unjustly shat upon by many critics when it first came out in 2012. But on the rewatch, The Lords Of Salem — the tale of a radio DJ who listens to a cursed record and then taken in by reincarnated witches who want to make her the devil’s bride in an act of centuries-old revenge — is a strange and brutal film with a lot of awesome psychedelic visuals. Zombie’s non-linear plot and play on urban legends are also impressively bizarre, and his flashbacks of colonial witchcraft are truly horrific. That said, the films cribs slightly too hard from Rosemary’s Baby, and doesn’t grip the viewer as immediately as many of Zombie’s other movies.

After the atmospheric overkill of The Lords Of Salem, 31 provided a return to form of sorts for Zombie. The movie focuses on a group of carnies who are kidnapped by a consortium of rich psychopaths and made to run through a murder-maze while being hunted by a gang of killer clowns known as the ‘Heads.’ The film retreads much of Rob’s classic subject matter — murderous clowns, dark carnivals, desperate battles for survival, and Halloween — but does so at such a manic, insane pace that the viewer can’t help but get sucked into it. It also shows Richard Brake, better known as Game Of Throne’s Night King, entering the Zombie universe as the terrifying yet charismatic Doom Head. As satisfying a popcorn flick as any other ultra-violent slasher.

Rob’s only animated film doesn’t get the constant love and praise it deserves, and that’s a goddamn shame. Full of ridiculous throwback humor and one of the best soundtracks in cinema thanks to pervert joke rockers Hard N’ Phirm, The Haunted World Of El Superbeasto gives us the Rob Zombie universe run through the brain of Tex Avery. The cast certainly doesn’t disappoint, with character voices provided by Paul Giamatti, Rosario Dawson, Tom Papa, and Tom Kenny (better known to the world as the voice of Spongebob Squarepants). Sure, it’s an offensive, sophomoric free-for-all in which topless cartoon girls wrestle while a satanic supervillain who lives inside King Kong’s skeleton gets off watching them — but who hasn’t had that dream?

READ THIS: Here's the origin of the moaning from White Zombie's More Human Than Human.

The movie that made Zombie a “serious” director in the eyes of many, The Devil’s Rejects takes the Firefly Family of Rob’s debut film and thrusts them into the gritty, filthy sunlit world. Steeped in gut-wrenching sadism and backwoods outlaw culture, the film follows Baby, Otis, and Captain Spaulding as they flee from the fuzz and get up to no good until their judgment arrives in a flood of fire and gore. The film not only simmers with ‘70s post-Manson paranoia, but it also lets us see Rob Zombie’s world as it exists within reality’s borders -- Otis Firefly isn’t an albino revolutionary, just a monster, and the opening shot of the Firefly’s car-stewn homestead by morning light adds a nauseating tangibility to House Of 1,000 Corpses' shadowy landscape. A sunbaked ride to the depths of hell.

For the third and -- perhaps? -- final chapter of the Firefly Family's story, Zombie brings together hefty helpings of both the psychedelic spookiness of his first film and the dire survivalism of his second, merging them into a hilarious and awesome thrillride. Packed with delicious Easter eggs and surprisingly potent comedy, 3 From Hell sees the Fireflys escaping from prison in the '80s and fleeing to Mexico alongside a new old acquaintance (Richard Brake, returning as a more lovable character than 31's Doom Head). While the Firefly's cult of personality storyline is sadly abandoned and the lack of Captain Spaulding is certainly felt throughout -- the good Captain is executed within the first fifteen minutes of the film -- the mature and nuanced ways Bill Moseley and Sheri Moon Zombie take on their old roles of Otis and Baby make the viewer feel as though they're in the company of familiar friends (and don't worry, Zombie still manages to work a clown in there). A triumphant conclusion to one bad, bad trip.

“The boogeyman’s real...and you’ve found him.” For a generation of metal and horror fans, Rob Zombie’s directorial debut changed everything. House Of 1,000 Corpses, centering around the gruesome fates of four teenagers who fall into the grasp of the psychotic Firefly Family on Halloween Eve, is a colorful, unhinged whirlwind, full of iconic performances, quotable lines, and inspired cinematography that feels like a view directly into the spookshow of Rob’s psyche. That’s what makes the movie so special, and earns it the number one spot on this list -- the singular vision behind it, giving us characters like Captain Spaulding and Dr. Satan without getting too overly concerned with motive, physics, or competing with the film world at large. Instead, Rob revels in taking viewers through the biggest, scariest Halloween party they’ve ever known, and leaves them both terrified by and enamored of the creatures they meet there. Welcome to the murder ride.

Oh, you’re into Rob Zombie? You get we’ve got a ton of stuff about Rob Zombie right?

Rob Zombie’s Munsters reboot to premiere on Netflix in September

Herman, Lily and Grandpa Munster are back – in colour! – for Rob Zombie’s upcoming Munsters movie, which arrives this year.

The colossal line-up for Louder Than Life has landed, featuring headliners Nine Inch Nails, Slipknot, KISS and Red Hot Chili Peppers, plus the likes of BMTH, Evanescence, Alice In Chains and so many more!

A brief history of zombies in pop culture

From big screen brain-eaters to gamers tearing the hordes limb from limb, here is a whistle-stop tour through the the world of zombies…