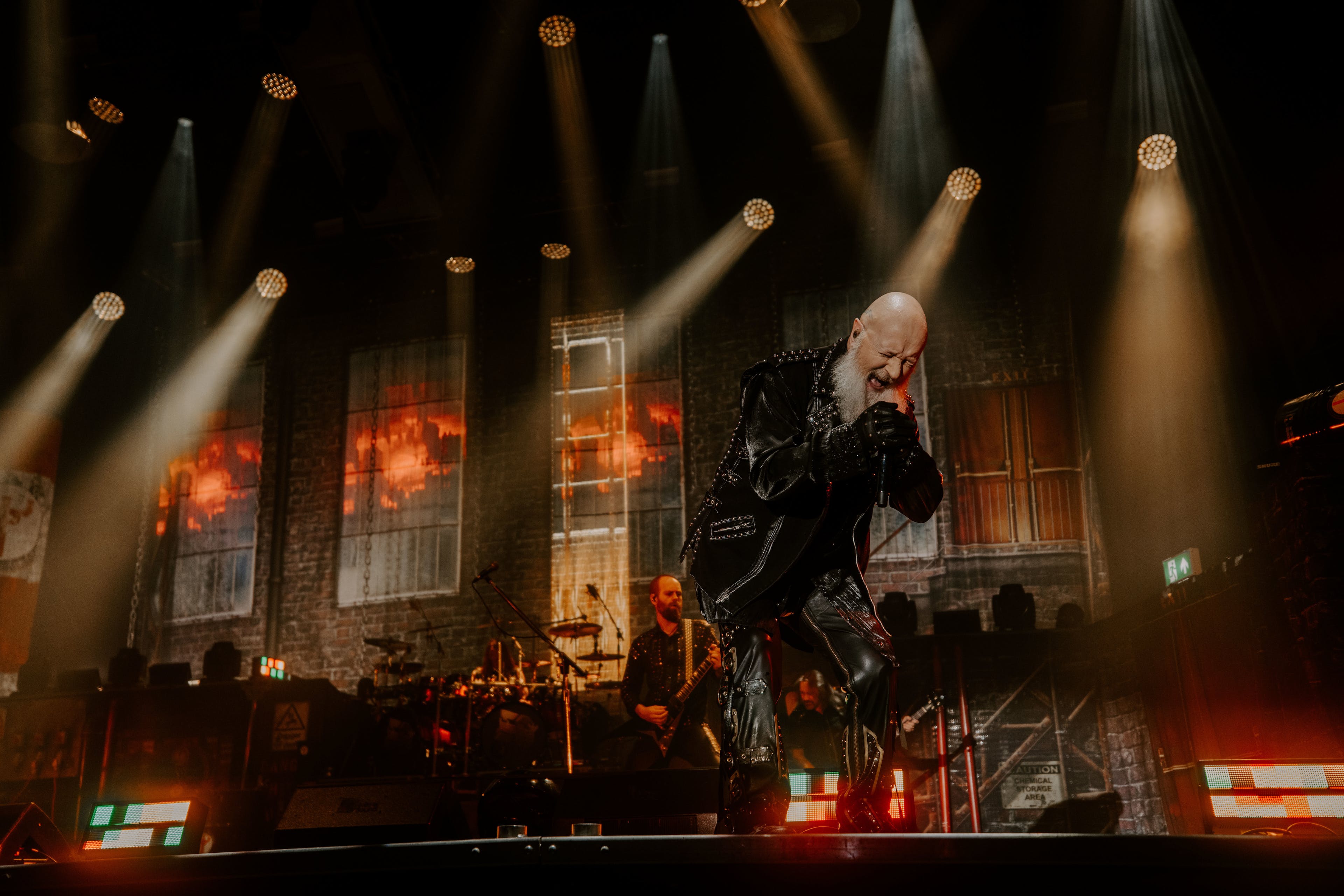 The final day at Bloodstock brought blazing sunshine, sudden rain, and Jesus himself wandering around the arena. But even the son of God can't compete with a Metal God. Or, indeed, Brian-actual-Blessed appearing on the main stage. Here's the highlights from the almighty finale to Bloodstock 2021…

Many of the punters spilling into Bloodstock's main arena for the festival's fifth and final day already feel like they're slipping into the abyss, but if not, London doomsters Grave Lines gleefully push them over the edge. There's something of the post-punk miserabilism of a band like Joy Division in their more despondent moments, but it's swollen by a heaving discontent and furious nihilism. From the stomach-bothering bottom-end of their sound, to its soul-dissolving top, they make music for an acid apocalypse. New song Gordian teases faster pace and more nimble atmospherics but ultimately rips your chest open to tear out the heart. When Caroline Cawley from Dystopian Future Movies drops in for False Flame it feels like it could be a soft reprieve but ends up a hauntingly hallucinogenic interlude. There is no escape. We're all fucked in the end. This is just a soundtrack to the long road out. (SL)

London stoner-metal kingpins Orange Goblin played the very first Bloodstock back in 2000, and celebrated their 25th anniversary in line with festival's 20th in frustrated silence last year. They're back with a vengeance today, their signature formula of big grooves, bigger riffs, and gravelly vocals reckoning on cool trippy shit hardly changed in the interim.

"We had the ambition of playing a few local shows and recording a demo," gushes hulking frontman Ben Ward. "Now look at this!" The crowd is already roaring out an "ORANGE! FUCKING! GOBLIN!" chant before they've lurched into a skull-rattling They Come Back, but as they hit pace there's absolute carnage in the afternoon sun. It's an undiluted onslaught of utter bangers: Saruman's Wish, Some You Win, Some You Lose, Devil's Whip, Red Tide Rising. All in, a long overdue birthday celebration for Britain's best cult metal band. Consider our heads thoroughly banged. (SL)

There's a lot of mad shit to see at Bloodstock this year: unhinged bin jousting, puke-stained Power Rangers, 20,000 fans and artists together in a field with scarcely a facemask in sight. Swiss-British power metallers Gloryhammer have to be right up there, though.

"I'm going to take you to a land of mysteries and wonders," declares frontman Thomas Winkler – a sort of cross between Thor and The Green Lantern – splashing the colour as dark grey clouds loom overhead. "I'm going to take you to the Land Of Unicorns!" The denim-and-leather-clad masses can't get enough, descending on the arena like some Tolkienesque army wielding everything imaginable, from inflatable pelicans to silicon sex toys. There's a very real sense of controlled chaos as Angus McFife, Questlords Of Inverness, Ride To The Galactic Fortress! and The Hollywood Hootsman surge the silliness. By the time they hit a joyous closing salvo of Universe On Fire and The Unicorn Invasion Of Dundee, the punters here not wearing their brightest shit-eating grins are the real idiots. (SL)

The toilets beside The Sophie Lancaster Stage are wafting a foul stench after the best part of a week's use, but it's the smell of sweet leaf emanating from within that draws a huge crowd to the tent's inside. "If you've got any mushrooms left," grins Tom Templar, frontman of folk-horror-metallers Green Lung, before brilliantly forgetting which song is up next, "now's the time…"

Said song is Black Harvest, a superb showcase of what they're all about. Combining the sheer elemental riff-worship of Dio-era Black Sabbath and the more aggressive nightmare psychedelia of Electric Wizard, they take an already-strung-out crowd on a last journey into the haze. By the time we get to infernal closer Let The Devil In, all in attendance are well and truly under their narcotic spell. One hell of a trip. (SL)

Stage and screen icon Brian Blessed – Flash Gordon's Prince Sultan – introduces Saxon to the main stage this evening in a scene that feels simultaneously stunningly surreal and weirdly fitting: one ageless outsider icon announcing a group of others. "I'm more excited than when I had my first shag," grins frontman Biff Byford as the Barnsley NWOBHM legends step up for their Sunday night subheadliner. "I couldn't sleep a wink last night!"

With Brit metal festival experience dating back to 1980's very first Monsters Of Rock, though, they duly go about smashing the field. From Wheels Of Steel and Strong Arm Of The Law to a heartfelt They Played Rock & Roll dedicated to Motörhead, it's exactly what you expect. There is a mid-set lull, with heavy rain showers proving too much for some, but uber-classics Never Surrender (dedicated to the siege mentality of the last 17 months) and 747 (Strangers In The Night) slingshot us back on course. By closer Princess Of The Night, they're at full steam, ready for the next stop. (SL)

Rob Halford has the metal standard silver studs on his black leather wardrobe swapped for gold this evening, in a subtle nod to this being the (belated) celebration for Judas Priest's 50th anniversary as a band. It's just about the only subtlety in their two-hour headline set, mind. From the moment the iconic pitchfork/cross symbol (15 feet tall, shining claret) is raised over Bloodstock's main stage against the backdrop of a burning 'metal factory', and they launch into an opening salvo of One Shot At Glory, Lightning Strike and You've Got Another Thing Comin', it's clear we're fully living in Rob's high-theatre, higher-volume universe.

Turbo Lover sends the hardcore into overdrive. A Touch Of Evil daubs on deeper shades of black. Rocka Rolla's first live outing since 1976 underlines that this is a very special night. If there's any concern that a 50th celebration could be an inherently creaky affair, it's quickly extinguished. Rob might look more like a skin-headed metal Santa than the lank-haired outlaw who emerged just up the road all those years ago, but his vocals feel remarkably uncompromised. The band around him – particularly guitarists Richie Faulkner and Andy Sneap – pointedly match up. Much of the music, too, feels like it's grown somehow more relevant over the years, with Painkiller still ripping flesh, and Electric Eye's indictment of surveillance culture ever more relevant.

For a final flourish the great Glenn Tipton steps onstage to help land the killing blows, as Breaking The Law incites as much chaos as ever all these years down the line. Then Living After Midnight (accompanied by a massive, inflatable, red-eyed 'Birmingham Bullring' bull) proves itself the ultimate anthem for Bloodstock's mandatory after-hours mischief. A stunning show of firepower from the Metal Gods. (SL)

Slipknot bring Knotfest to Chile, Colombia, Argentina and Brazil this winter and they're bringing some heavy hitters with them!

The nominees for induction into this year’s Rock & Roll Hall Of Fame have been announced, with RATM, Judas Priest, Eminem and New York Dolls among the 17 names…

Deftones, Faith No More, A Day To Remember, Beartooth, Code Orange, Employed To Serve and loads more have been added to next year's Graspop Metal Meeting!