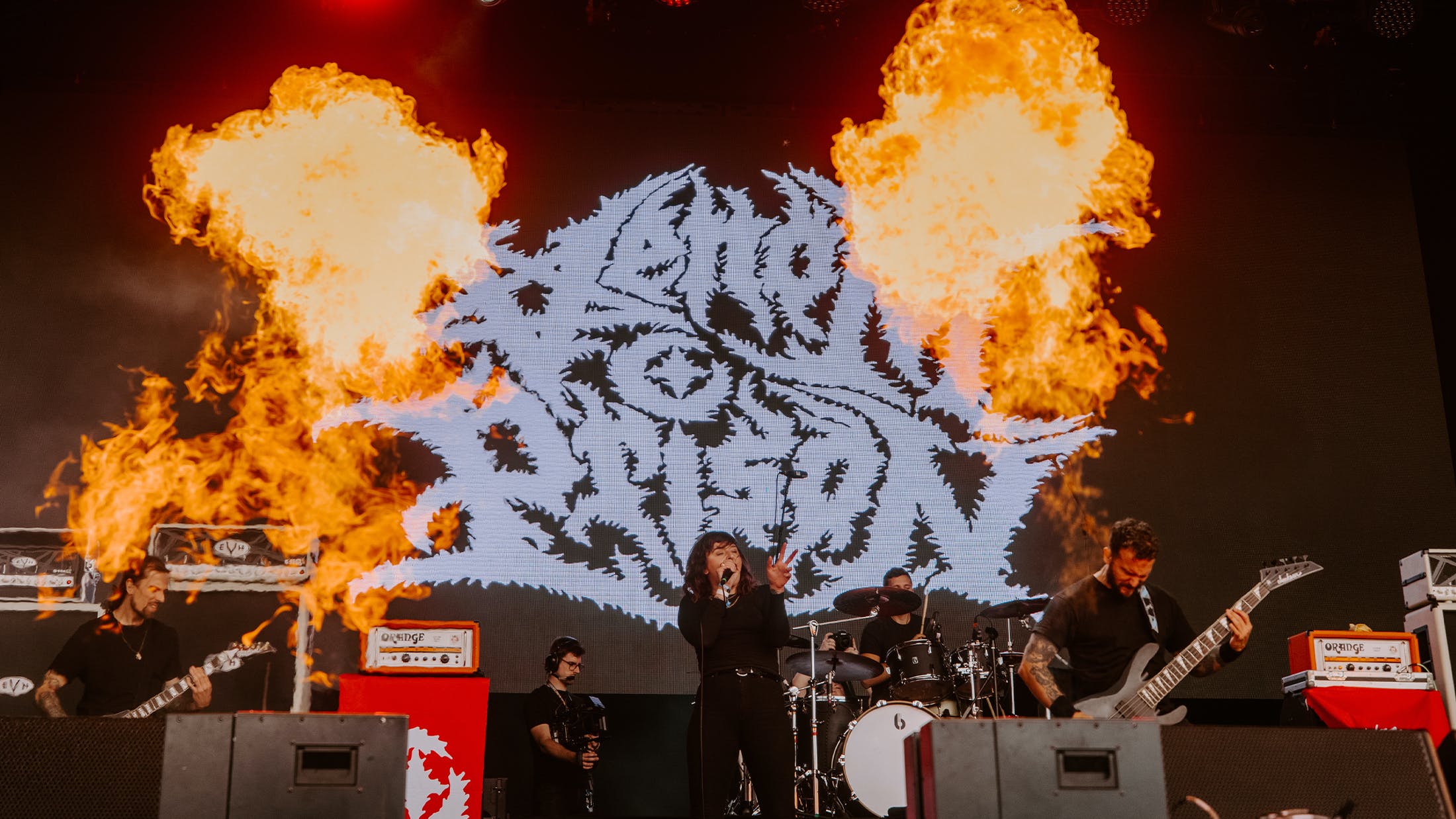 It was forced to pause for a year, the line-up was forced to change around COVID, and until last week the weather looked like a washout – but through incredible hard work, a never-say-die attitude and the dedication of bands, fans and staff alike, Bloodstock is finally here. Here's the highlights of what happened on Friday as metal came home to Catton Hall…

Serena Cherry can't stop smiling this afternoon. A stiff breeze is blowing across the site as she and her bandmates in Svalbard take the stage to kick proceedings properly into gear, chilling the dry summer air ever so slightly, and ratcheting an atmosphere to match their massive, windswept soundscapes. As much as their colossal blend of gritty hardcore punk, frosty atmospheric black metal, and epic post-rock normally demands a pitch-black backdrop, under today's sweltering sun it feels like a grandiose celebration of simply being able to get back onstage. From the heartbroken high drama of Throw Your Heart Away to the righteous, socially conscious cry of Revenge Porn, it's a powerful trip via deepest darkness info blinding light.

"I can't tell you how amazing this is…" Serena declares, balancing rock star presence and very human fragility as they reach a massive emotional climax. For all in attendance, the feeling's very much mutual. An incredible return. (SL)

There's a palpable sense of disappointment when the news breaks that Scouse avant-metal masters Loathe won't be making it to Bloodstock this weekend. It's lessened somewhat by the announcement that we'll be getting a set from another of the UK's finest young bands instead: fast-rising Leeds quintet Higher Power. Although their ultra-cool brand of wiry hardcore feels initially at odds with Bloodstock's more lumbering denim-and-leather clad tradition, frontman Jimmy Wizard spearheads an all-action performance to get the sizeable early-afternoon crowd onside, tapping into 18 months of pent-up energy and unleashing far more chaos than the cynics could've expected.

"We're back, baby," he grins, mischievously. "It's good to be back in a field with a bunch of freaks like ourselves." Flying that freak flag aside, the earthy honesty of their songs – particularly Staring At The Sun's earnest ode to a beloved furry companion – endears them even more to the no-bullshit majority of these metal masses. (SL)

Venom Prison bring the fire to Bloodstock this weekend. Where plenty of other acts experiment with flaming pyro across Catton Hall's singed stages, the Welsh-Russian collective accompany it with a brand of scourging emotional exposure that feels every bit as incendiary. Back in 2019, before COVID took hold, K! described brilliant vocalist Larissa Stupar as "metal's most important – and uncompromising – voice", and on today's evidence she's only intensified over the months locked away. They've got riffs to break bones, sure. But her vocals are fit to strip away the flesh. Perhaps most remarkable is their ability to repurpose the ghoulish, grinding sounds of old-school death metal with a message that sits right on 2020's social cutting-edge while maintaining the ungodly bludgeon and keeping every one of the bloody-knuckled pit trolls throwing down here on board. By the time they hit cataclysmic closer Defy The Tyrant – performed for one of the first times since last year's release – it's clear that there's a tidal wave of pain coming our way when touring gets properly underway. Simply devastating. (SL)

The sun's still up as Liverpool cavemen Conan hit the stage, but they don't take long dragging Bloodstock into a swirling pit of darkness. Three-piece line-ups really shouldn't sound this all-enveloping, but between frontman Jon Davis, bassist Chris Fielding and drummer Johnny King they max out the heaviosity (and sheer volume) to absolutely devastating effect for what will go down as the heaviest set of the whole weekend. A big, boisterous Friday night crowd ready to party are perhaps keen for a higher-energy soundtrack to getting very, very pissed, but between the chest-crushing ebb and flow of Satsumo and the sheer nightmare pound of Foehammer, they're thumped and suffocated into a concussed sore-neck stupor. It's not party music in any normal sense, but we're all having a hell of a time even as we're dragged kicking and screaming into the abyss. (SL)

There's a moment midway through Devin Townsend's absolutely bonkers main stage headline set when eight fans in inflatable panda outfits march wordlessly towards the pit while a smattering of blow-up sex dolls rain down from on high. For those witnessing it, it's just one moment of mind-boggling brilliance in a performance full of them. The Canadian musical mad scientist's "by request" set promised to be one of the more divisive moments of the weekend, but as glittering rockets and scorching flame towers erupt, while underrated classics like Regulator, Stormbending and Love? are brought to life by a band of hired guns who've – remarkably – only been together for three days, there are few in attendance not overwhelmingly swept along.

"I don't know about your year, but mine's been a little weird," Devin quips dryly as he launches into a full-throttle Deadhead. We get an interdimensional guitar duel with Ziltoid The Omniscient before brass-wielding demons invade for the evil swing of Bad Devil. By the time a brass-wielding gorilla, drumming elephant and 20-strong choir emerge for Spirit Will Collide, Bloodstock is fully in Hevy Devy territory. Said trunky boi sticks around for an absolutely smashing version of Strapping Young Lad's Detox, before Vampiro drops curtain with suitably horrific verve for the final movement in a Friday The 13th masterpiece. Fucking incredible. (SL)

Napalm Death rule, but why? Maybe it's because they're still the gnarliest band in UK heavy music, more than three decades into their existence, and long after their name was written into the pop-cultural lexicon, as "suitably soft and subtle" songs like Last Gasp and Scum continue to knock teeth out during this late-night showing. Perhaps it's down to the fact they've more humanist heart than any three other acts here combined, with frontman Barney Greenway's heartfelt sermon on the plight of asylum seekers before they launch into Contagion one of BOA 2021's most straightforwardly affecting moments. Hell, it could even just be down to the sheer caustic burn of all-time grindcore bangers like Continuing War On Stupidity, Suffer The Children, Smash A Single Digit and On The Brink Of Extinction. What's not up for question is that they do absolutely rule this evening, distinguishing themselves as the apex predators on this unprecedented Best Of British lineup. Sublime shock and awe. (SL)

"The fact that we're putting it on is what counts": Why 2021 was the most important Bloodstock ever

From Slipknot and Sum 41 to Tool and Tenacious D, we rank the greatest albums from the year 2001…

Metal artists don’t sit around listening to metal all day – inspiration comes in many forms. Here are just some of the indie records to influence the realm of heavy music…

The 13 essential progressive metal albums you need to know

From Opeth to Mastodon to Tool, these are the progressive metal albums that everyone needs in their record collection…

As Mercyful Fate unfortunately pull out of Bloodstock 2021, the festival have announced the headliner's replacement – as well as three more bands.

Some people are born to rock, but these musicians all had to really work for it…

12 of the craziest concept albums ever

Devin Townsend: "I was unable to articulate my discontent, so I tended to act up. I even took a sh*t in Steve Vai's guitar case"

Devin Townsend on a life of heavy music, experimentalism and never fitting in