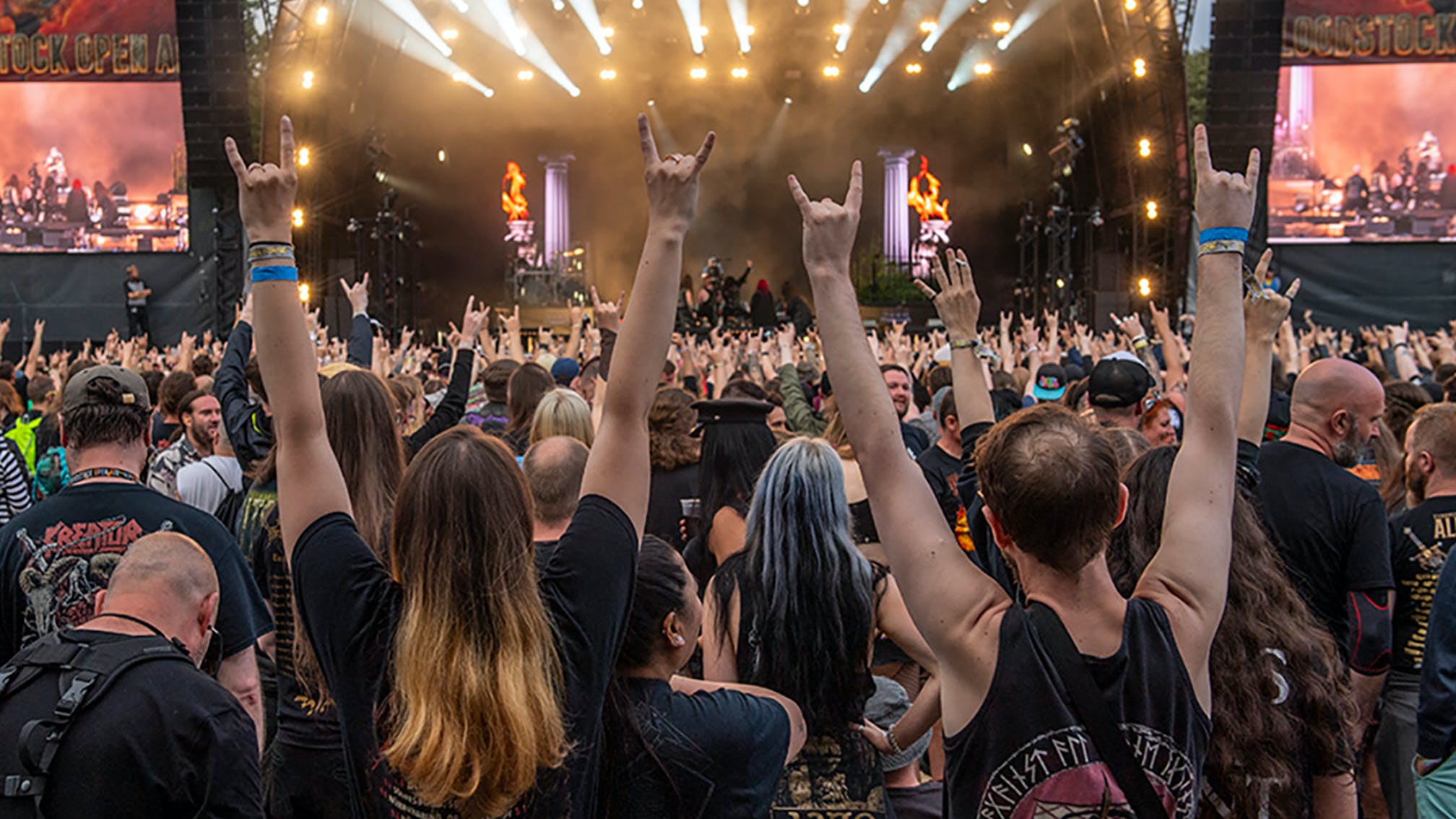 If one face sums up Bloodstock 2021 it is perhaps the utterly joy-filled, if somewhat scary, visage of Devin Townsend on Friday night. There was absolutely no way the geek god of metal was going to miss his first-ever UK festival headlining slot, even if it meant self-isolating at either end of a close to 10,000-mile round trip, and having to assemble an entirely new band of UK-based musicians to perform his always diverse and often complex set. Hell, he even managed to bring an elephant along.

“There are people in life that you should look up to in my opinion, and Devin is one of those people,” nods Bloodstock Director and chief booker Vicky Hungerford. “He not only self-isolated here, he self-isolated at home. He wanted to be extra cautious, so he was self-isolating for a month, just to make this show work. And he hadn’t played with those musicians until three days before Bloodstock. So if you ever want to see anyone worthy of legendary status, he’s your man.”

Devin clearly moved mountains to be at Bloodstock, just as the event organisers worked tirelessly to make this festival happen. That isn’t to criticise the many bands who had to pull out, however. With safety concerns, logistical nightmares and travel restrictions all coming into play the challenges proved insurmountable in a lot of cases – especially for bands based outside the UK.

Some pulled out months ago. Saturday night headliners Mercyful Fate were the most high-profile casualty (having themselves replaced Behemoth from the postponed 2020 line-up) but were also joined on the missing list by the likes of Dimmu Borgir, Philip H. Anselmo & The Illegals, Butcher Babies, Life Of Agony, Sacred Reich and Exhumed.

Tellingly, many of the bands who couldn’t play this year have now been confirmed for 2022, including Mercyful Fate. Bloodstock is a festival that bands want to play curated by people who are themselves all metal fans and know who they want to see in the hallowed hollows of Catton Hall.

The eventual line-up that played this weekend was very different to the ones that were initially announced, and changes were still being forced on the festival right up to the wire. Jinjer, Sylosis and Loathe were all forced out at the last minute – the former due to travel restrictions from Ukraine, and the latter two due to a combination of COVID-19 contact notifications and positive test results. In the case of Loathe it must have been particularly gutting, as they’d been drafted in as a sub for Dark Tranquillity in the first place. There were even bands having to pull out day by day, with the likes of Party Cannon and Black Tongue also dropping out during the festival.

“We’re having to do the lateral flows, the COVID tests and we obviously won’t allow anyone onsite if they’re positive,” said Vicky on the Sunday afternoon. “What we’re dealing with this year is completely unprecedented. We’re handling it in the best way we can, but there is no rulebook for this unfortunately. So it has been difficult, but fingers crossed we’re rising to the occasion on this.”

The whole Bloodstock team did indeed rise to the occasion magnificently, drafting in replacements, juggling running orders and still putting on a killer festival in the most trying of circumstances. And, to some extent at least, it almost didn’t matter who was on the final line-up. Bloodstock is about great bands but it’s also about the easy-going vibe and sense of community. When the 2020 event was first postponed, the organisers expected maybe half of the ticket holders would request a refund. Instead, in the face of great uncertainty, 94 per cent decided to roll over their tickets.

“The community itself has been so supportive,” Vicky nods. “Even when we had to postpone bands – big bands – people turned round and said, ‘Look, we’ll be happy to see anybody play in a field.’ The fact that you’re putting it on is what counts, and that is the community spirit that we’ve always been lucky enough to have at Bloodstock.”

The much-changed line-up was also an opportunity for some. Thrash veterans Kreator, for example, absolutely owned their headliner status, having previously torn through one of the festival’s finest-ever special guest slots in 2017. While She Sleeps made their Bloodstock debut and a reborn Black Spiders brought their thunderous rock'n'roll to a prime slot on The Sophie Lancaster Stage.

Bloodstock also prides itself on providing a springboard for new and lesser-known bands though and, as ever, there was plenty to discover. Ward XVI electrified the early crowd on the Wednesday with an ambitiously theatrical set. Thrashers Tortured Demon have an incredible talent for a trio with an average age of just 15, and Urne took Bloodstock on a trip with their Mastodon-styled mix of heaviness and atmosphere. Elsewhere, King Witch brought the doom in fine style, Pist rained down a groove-laden sludgestorm of distortion, and Bloodshot Dawn brought some melodic death metal energy to shake the hangovers on an early main stage Sunday slot.

Pretty much every corner of the metal world is represented somewhere at Bloodstock, and it remains one of the most welcoming, friendly and frankly brilliant festivals around. We’re still in strange times, of course, and the number of bands pulling out due to positive tests and pings provides a sobering reminder that this pandemic is far from over. For now, though, Bloodstock 2021 has been a huge success in the face of incredible adversity.

“I go out into the arena quite a lot so I chat with a lot of fans, and the feedback we’ve been getting has been amazing,” smiles Vicky. “We’re all in the same boat, and it’s the first time for a lot of us to let our hair down and really have fun – to hug and headbang and get into the mosh-pits.”

While She Sleeps are headlining Alexandra Palace next year

Onstage at Alexandra Palace last night, While She Sleeps announced they are returning to headline next year

Listen to While She Sleeps’ new version of SYSTEMATIC, featuring a guest spot from Rou Reynolds of Enter Shikari.

For their mind-blowing ‘throwback’ set in Malta, Bring Me The Horizon brought out special guests, and aired some old-school favourites that they haven’t played in well over a decade…

Watch While She Sleeps’ “biggest visual project to date”, a mini movie accompanying their new single EYE TO EYE.

“We have to make sure that service doesn’t die”: Inside the BBC licence fee freeze and its impact on rock

Culture Secretary Nadine Dorries recently announced plans to replace the BBC licence fee. But what would that mean for the artists that rely on radio and TV for much-needed exposure? K! investigates what the potential changes would mean for your favourite band…

The Byron Bay bruisers are finally coming, and they’ve got While She Sleeps with them…