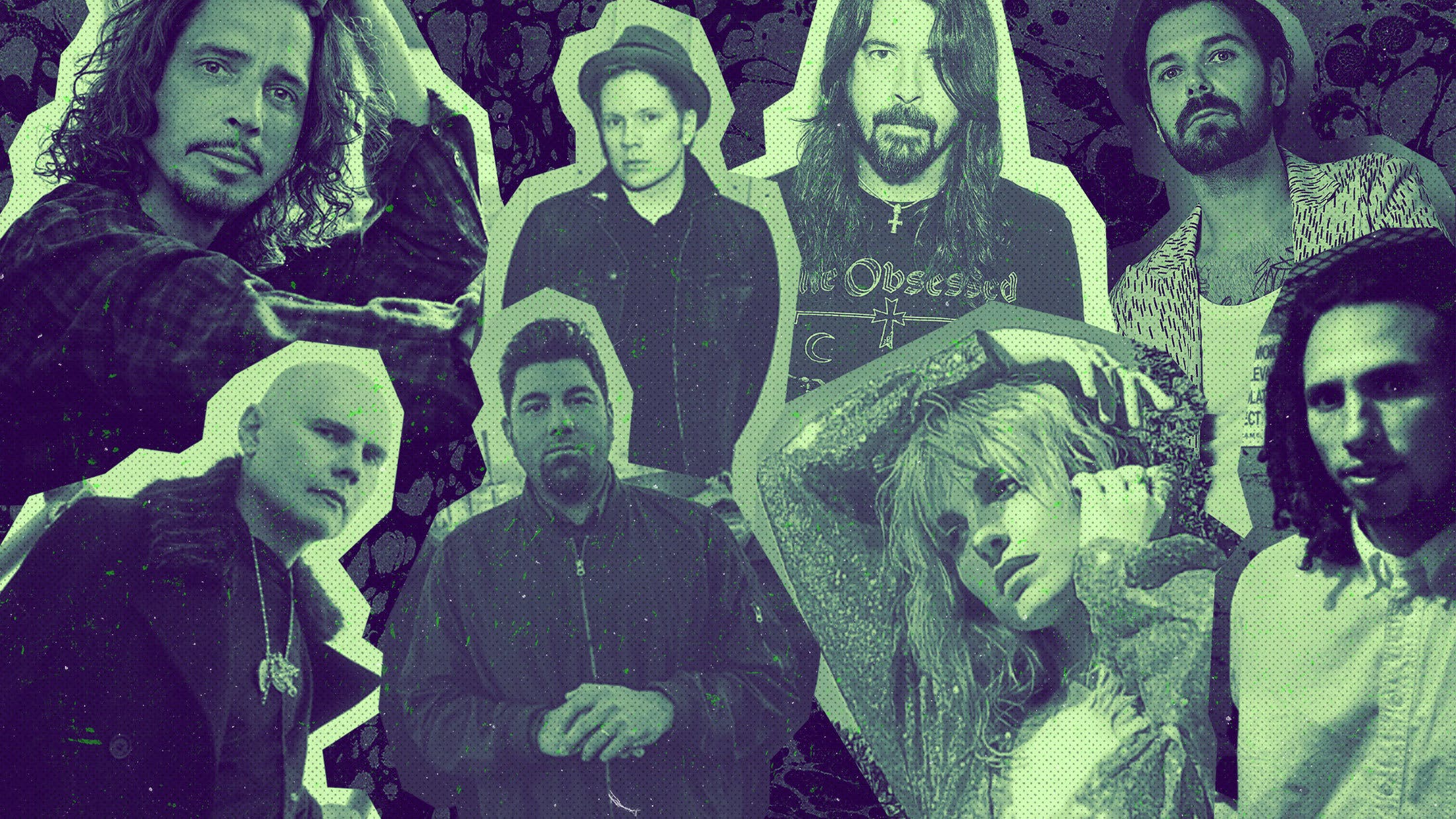 There are all sorts of valid reasons for changing your name when you’re in the business of show business. Maybe you were born with an unfortunate or an awkward surname, or your parents failed to foresee that your future would be onstage, lumbering you with a really normal name like Barry (with apologies to Messrs White and Manilow). Maybe you just fancy the idea of rebuilding yourself as someone completely new, with a flamboyant identity to match – like when David Bowie adopted his Ziggy Stardust alter-ego. Hell, even ‘Bowie’ was a stage-name – David Robert Jones and The Spiders From Mars doesn’t quite have the same zing to it, does it?

But there are occasions in popular music when a pseudonym or an alias are just necessary. It’s usually because the artist in question is legally forbidden from recording for another label. Or maybe a name change feels appropriate for the project in question. It’s also an effective way of creating an air of mystery or it could just be for fun. Whatever the reason for hiding in plain sight under different names, everyone from The Beatles to The Stones, Prince and The Traveling Wilburys have done it. Green Day apparently love doing it so much that we’d need a whole separate feature dedicated to their members’ various extra-curricular pseudonyms and side-project alter egos.

For the purposes of sanity and brevity, we’re settling on a highlight reel of notable rock and metal guest spots and one-offs, where stars have used an assumed name to appear on various records. If nothing else this should ensure you never have to Google it, which as we found out the hard way, would’ve been much easier had Dennis Lyxzén and the gang not started a band called Fake Names. Nice one, lads.

How about this for a quirk of metal-changing fate? In 1999, Deftones frontman Chino Moreno lent his considerable vocal talents to the Sevendust song Bender, the final track on the Atlantans' second album, Home. For reasons known only to those involved (though there’s likely a simple legal explanation) Chino decided to come up with a pseudonym for the guest spot, leading to rumours that his ego was spinning out of control. Something apparently got lost in translation however, and in the end he was mistakenly credited in the liner notes as ‘Pony 1’, inadvertently inspiring the title for the Sacramento gang’s gargantuan next record. “I told them to put 'Pony Wong' since Wong is my middle name – Wong becoming 1,” Chino explained, “The whole rumour thing made the title [of the album] White Pony an obvious choice.”

Cameron Crowe’s Seattle-set 1992 romcom Singles famously shone a light on the city’s ‘grunge’ scene, featuring guest appearances from luminaries such as Alice In Chains, Pearl Jam and a brief appearance from late Soundgarden frontman Chris Cornell. The singer was apparently the director’s original choice to play the lead role of Cliff Poncier, frontman of the movie’s fictional band Citizen Dick, but with Chris’ commitment to his real-life music career a cameo had to suffice. This didn’t stop him making an EP of songs under the name Poncier, with help from Pearl Jam trio Jeff Ament, Eddie Vedder and Stone Gossard. Cameron Crowe was so impressed he included the song Seasons on the soundtrack and Chris would eventually revisit all five of the EP’s tracks, with Spoonman becoming a huge Soundgarden hit two years later.

Not to be confused with the deceased WWE Hall Of Famer of the same name, Pat Patterson is a reference to Patrick Stump’s old band pre-Fall Out Boy fame, Patterson. In 2011 he briefly resurrected the name for his vocal contribution to seething Weekend Nachos track, Jock Powerviolence. If you’ve never heard the normally mild-mannered warbler dust off his old hardcore chops, you should check it out. He sounds really, really cross.

You know Hayley Williams as the none-cooler vocalist of Paramore, as well as celebrated solo artist par excellence thanks to 2020 debut Petals For Armor and 2021's surprise follow-up FLOWERS for VASES / descansos. But did you know she too has an alter-ego by the name of Chase Magoo? Well, now you do. Again, it’s presumably for boring music industry reasons or some in-joke we’re not privy to, but that’s how she’s credited for her vocal cameo on the track As U Wave, a song by her Paramore drumming buddy Zac Farro in his side-project HalfNoise.

Ian MacKaye has made a name for himself on his fair share of classic records over the years, whether it be giving straight-edge a name through Minor Threat, laying down the DIY blueprint in Fugazi and even on 2020’s impressive debut album from new band Coricky. But back in the early days of this long musical journey, he was also going by the names Gumbo MacKaye and Mr Egg Gumbo, when he was lending what production and recording expertise knowledge he could to fellow D.C. upstarts Beefeater, and on the Dutch Hercules EP from Tesco Vee & The Meatkrew. Ever wondered if Ian MacKaye can rap? Check out Crapper’s Delight. The clue might be in the title…

A wild one this, and admittedly it’s as-yet unconfirmed, but it appears as though in the summer of 2019 Rage Against The Machine vocalist Zack de la Rocha played drums on three tracks of Bright Eyes’ 10th album, Down In The Weeds, Where The World Once Was. It seems an unlikely association of course, but the ‘Kip Skitter’ on the far right of this Instagram post sure does look like him. The possibility is given extra credence when you consider that Jon Theodore, also pictured, is credited for drums and percussion elsewhere on the record, and he played with Zack in his post-Rage project One Day As A Lion. If only the Rage man wasn’t so elusive, we could actually ask him to clarify once and for all.

To avoid breaching the terms of his recording contract with Nirvana, Foo Fighters frontman Dave Grohl adopted the moniker of Dale Nixon when he filled in on drums for the 1992 Melvins album King Buzzo. The name is a reference to the alias favoured by Greg Ginn on a couple of Black Flag albums, in an attempt to throw people off the scent that he had recorded both bass and guitar parts. It’s a name that has also been used by several other musicians since, becoming something of a running in-joke. Dave also briefly went by the name Alex ‘Vanilla’ McCloud for the 1992 boxset Neapolitan Metropolitan, featuring his pre-Foos and post-Nirvana band, Late.

Say the name John Reis to most people and they might look at you with vacant, quizzical bemusement. But tell them it’s the real name of Speedo from Rocket From The Crypt and most people (at least those with good taste and even a passing knowledge of alternative music) will instantly know him as the all-singing, all-dancing, fire-breathing high priest of the much-missed San Diegan rock’n’roll legends. A man of as many names and bands as he has talents, he’s also been known to go by The Swami, Slasher, Swasimodo and at least one offensive nickname that we’re probably best not mentioning.

Smashing Pumpkins frontman Billy Corgan apparently loves an alias – particularly when it comes to his credits on production work with other artists. While manning the consoles for cult artists The Frogs, he’s gone by the name Johnny Goat, used Mr. Lemon when producing the Starchildren 7” Delusions Of Candor (Flight Of The Eagle), he’s been Billy Burke in Zwan (an apparent reference to actress Billie Burke, who played the ‘good witch’ in The Wizard Of Oz) and of course there’s his solo material, branded by his initials, WPC (William Patrick Corgan).

Props to Nick Oliveri. Not only has he spent most of his time onstage wearing little else but a grin and a bass guitar, he’s also responsible for several inventive aliases across his various rock guises. While he was tearing things up in his stint with Queens Of The Stone Age in 2000, he put out his first Mondo Generator album, Cocaine Rodeo, taking on the aptly-named persona of Rex Everything, carried over from his on-and-off-again appearances with punk hellraisers The Dwarves. Pierre Pressure is another alias, a nickname given to him by Queens’ Josh Homme for his apparent persuasive party antic skills. He’s also been known to use the names The Dwarf and Nikolai Svetlana while moonlighting with Italian-Russian thrashers, Svetlanas.

Simon Neil as The Atmosphere

If you weren’t aware of Biffy Clyro frontman Simon Neil’s side-project Marmaduke Duke, it might come as some surprise to see him dolled up in elaborate feathers, bright red lipstick and a Bauta mask for the role of his alter-ego guise, The Atmosphere. The electro-rock duo (completed by Sucioperro’s JP ‘The Dragon’ Reid) first emerged with an audacious 18-track debut The Magnificent Duke in 2005, the opening gambit in a high-concept trilogy, which is reportedly set to be completed live when… well, whenever it’s possible to do that kind of thing properly again. Hopefully soon. It’s not the only time Simon has dabbled in the realm of mystery, though, having adopting the name ZZC for his first official solo outing in 2014, recording the song To The Bone for the BBC Radio 1 Rescores Drive project.

For a man so particular about never being referred to as a producer, it comes as some surprise to look at Steve Albini’s recording credits and find a long list of alternate names assigned to his input. But if you’ve paid any attention to his own music over the years, you’d be well aware that a wicked sense of humour is at work under the surface. Ready for the rundown of his various aliases? Here goes: A Skinny Bespectacled Guy (Screeching Weasel/Pink Lincolns 1993 split 7”), Arden Geist (Bitch Magnet), Buck Naked (Big’n), Ding Rollski (Silverfish), Don Moist (Bastro), King Barbecue/Mr. Billiards (Tar), Lenard Johns (Mule, P.W. Long’s Reelfoot), Reggie Stiggs (Didjits), Robert Earl Hughes (Blatant Dissent), Some Fucking’ Derd Niffer/Perd Niffer (Slint), Terry Fuckwit (Pegboy), The Li’l Weed (Urge Overkill, Riffle Sport), The Proprietor (Don Caballero), Fluss (a reference to his dead cat, working on records by Rapeman, Deerheart and Killdozer), Torso Man (Volcanosvns) and Whodini (Crain). Fancy some bonus Steve Albini shinfo? There’s a French noise band called Enregistré par Steve Albini, which translates as Recorded By Steve Albini. Incidentally, they have never been recorded by Steve Albini, or any of his aliases. But that’s probably enough internet for today…