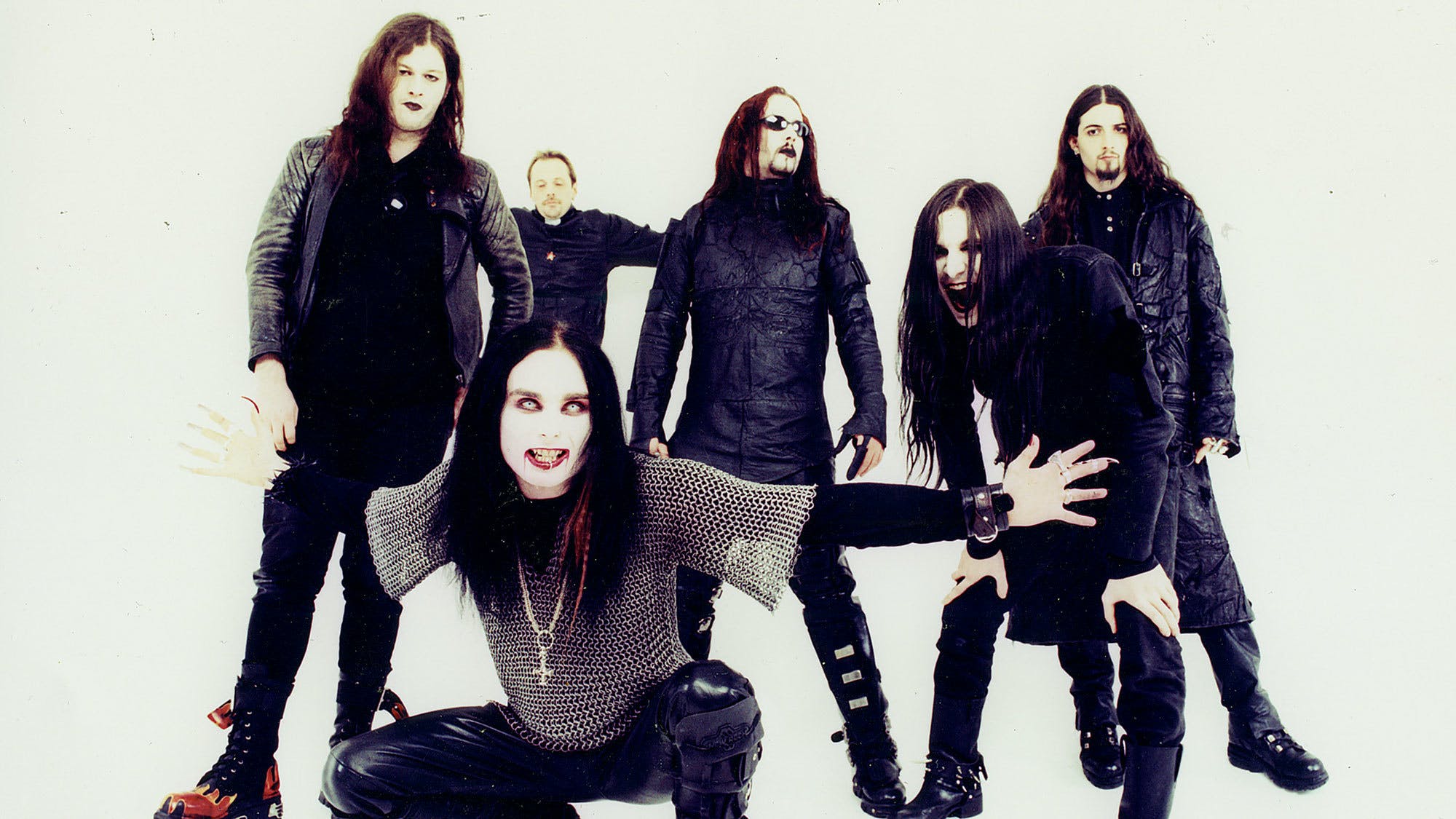 Say what you like about Cradle Of Filth – what's undeniable is that they changed the face of metal forever. By injecting a heaping dose of gothic horror into black metal's stark and unromantic scene, the Suffolk band created an entry point through which new fans could access the most extreme underground genre of all time. Meanwhile, as they've progressed, grown, and left the genre niche, Dani Filth and co. have spread their elaborate influence to subgenres across all of extreme music, from melodeath to metalcore. As such, there are a whole bunch of bands who owe their careers to Cradle Of Filth's nocturnal tyranny – like this lot…

Cradle Of Filth's influence on BABYMETAL is two-fold. On the one hand, there are the pure sonics of the Japanese band, whose mixture of synth overkill and blastbeat-driven melody owe plenty to Cradle. On the other is their live show and fashion sense, reflecting the intersection of gothic ruffles and bondage straps. Had Cradle not laid the groundwork for this sort of sonic profile and image being popular in the modern day, BABYMETAL’s ascent would’ve been an even harder uphill battle.

Obviously Dimmu Borgir are more peers to Cradle Of Filth than successors, but the Norwegian band’s symphonic sound was truly brought into the spotlight by Dani and the gang. Not only that, but one would venture that Cradle’s early rise to popularity gave Dimmu plenty of the opportunities they might not have had without the British band leading the way. No shame in getting a hand up from another act in the same field.

As Cradle Of Filth moved away from typical black metal to more aggressive, all-around gothic extreme metal, they inspired a legion of bands who saw the vampiric horror trappings as an outlet rather than a necessary set of rules. Motionless In White are the perfect example of this, producing throat-ripping metalcore that never skimped on the foggy Transylvanian vibe. Their pale varsity Nosferatu image owes more to Cradle than they could ever say, even if it takes a less flowery approach overall. They're not exactly goth, more just… goth-curious.

It’s hard to count the things Ghost do that Cradle Of Filth helped cement into metal’s pop psyche: the elaborate stage show, the normalisation of corpsepaint, the blasphemous clergy routine. But more than anything, it’s Ghost’s hyper-European aesthetic that they owe to Cradle, whose obsession with gothic literature and old cathedrals helped establish the spire-choked satanic Victorianisms that Ghost do so well. We’d see that tour in a heartbeat.

The obvious thing Michigan’s The Black Dahlia Murder owe to Cradle Of Filth is their vocal sound. TBDM frontman Trevor Strnad’s movement between harpy shrieks and bestial growls is incredibly similar to those of Dani Filth, and the bat-chitter rhythms he uses definitely echo those of the latter. Don’t get us wrong: Black Dahlia also owe the vampire-filled blackened hardcore vibe they court to CoF too, but man, those vocals jump out at you.

Sure, Ice Nine Kills play songs about horror, just like Cradle – but so do plenty of bands. The real way in which INK carry on CoF’s legacy is through their guitar antics, vocal interplay, and sense of theatrical scale. On tracks like The American Nightmare, the band’s switching between clean howling and guttural shrieks set the scene of the horror flicks that Spencer Charnas sings about, paying tribute to the movies’ villains rather than just giving them lip service. That grand embodiment of horror is something Cradle have always made a foundation of their music.

Between blood, sex, bondage, and total devil worship, Belphegor and Cradle Of Filth should probably hang out more. Even as the former started out, they showed their Filthian tendencies with albums like Lucifer Incestus. But it was later on, as Belphegor emerged as more than just another satanic death metal band and experimented with more overt sexual overtones and rhythms, that they became true peers of the Suffolk black metal band. This is a split we’d like to hear.

On the surface, we can understand why Alestorm might not seem like the right band for this list. But first of all, Alestorm’s musical style – driving all-purpose extreme metal cloaked in listenable synths – is very much something CoF coined. More so, Cradle established something the Scottish pirate metallers based their whole career on: the idea of a Band About A Thing. For every swashbuckling ghost Alestorm write a track about, they have satanic vampire nobles from a Cradle Of Filth song to thank for it.

California metalcore act Bleeding Through always played with goth overtones, especially with the inclusion of vampy keyboardist Marta Peterson. What’s most interesting, though, is that they’re one of the acts whose influence comes more from Cradle’s mainstream material than their underground stuff. While plenty of bands are quick to note how cult they are only listening to Principle Of Evil Made Flesh, Bleeding Through were happy to be part of the movement that inspired albums like Damnation And A Day or Nymphetamine.

Dutch horror metallers Carach Angren may not be Cradle Of Filth’s biggest fans, especially after it was alleged that Dani Filth copied their corpsepaint design. But while Dani may owe the band a nod for the face layout, Carach owe Cradle for their sound, specifically the way in which they intertwine chugging, arch extreme metal with gothic horror synths. Don’t get us wrong, a track like Blood Queen absolutely slays – it just definitely sounds like it could be a Cradle Of Filth song.

Here’s BABYMETAL’s setlist from their first show back

BABYMETAL return to our world in stunning fashion with a hit-packed setlist to match.

BABYMETAL return to announce new concept album, The Other One

Just over a year on from telling us that they would “disappear from our sight”, BABYMETAL are back with a brand-new concept record!

BABYMETAL are teasing the METALVERSE: “A new chapter is about to begin”

After announcing last year that they would “disappear from our sight” on October 10, a “new restoration project” is being teased that will “reveal a side of BABYMETAL we never knew existed”.