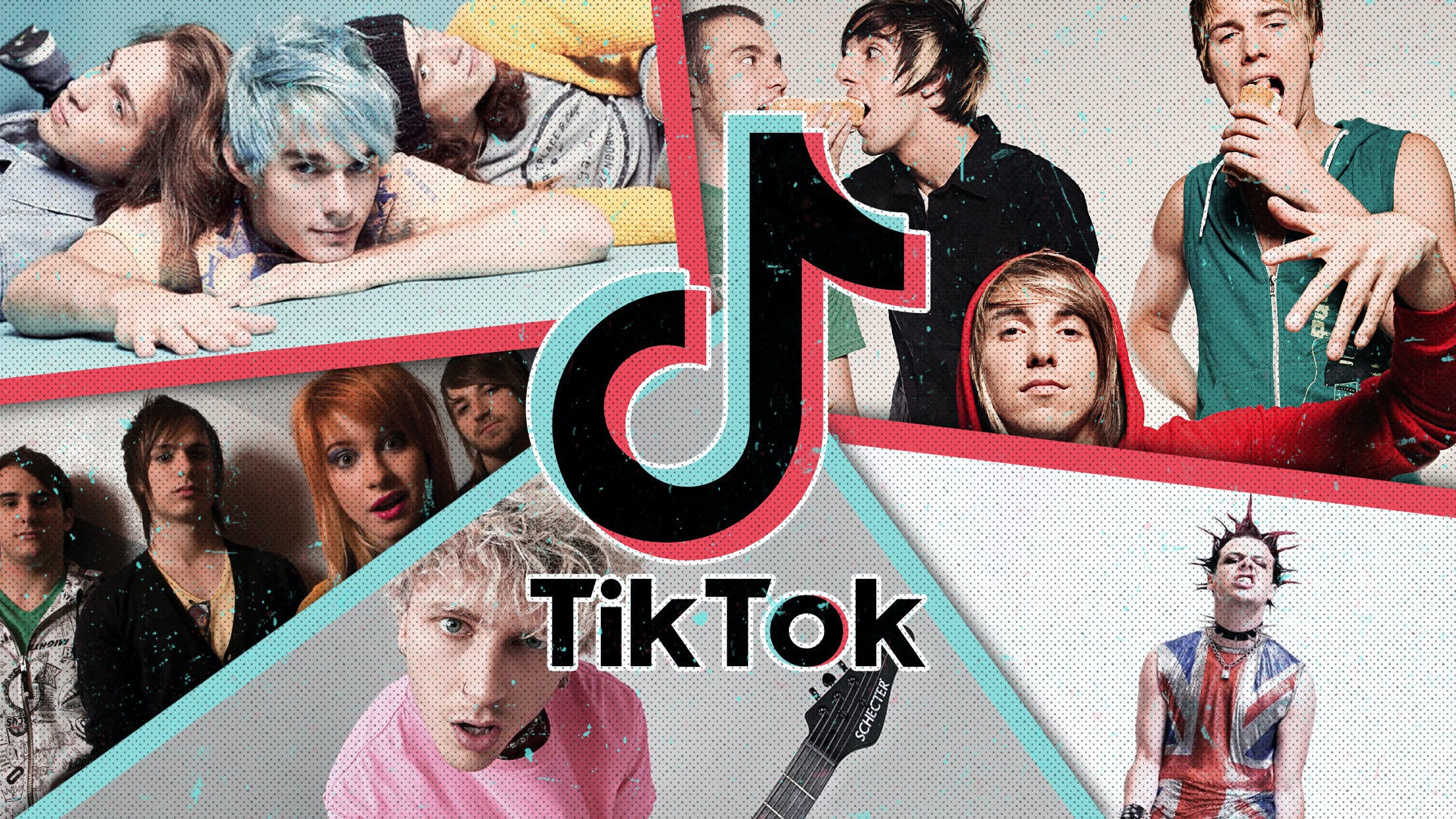 A pop-punk resurgence is happening on TikTok. The hashtag #poppunk, which has almost 400 million views, is filled with users waxing nostalgic on the music of their youth, delving into the subculture for the first time, and declaring, "It's not a phase, mom!" Some of these videos have millions of views, and their creators thousands of followers: yungricepatty’s rendition of All Time Low’s Dear Maria, Count Me In currently stands at over 8 million views, his account followed by 830,000 people.

Since the pandemic put a stop to live music, these online spaces have become more important than ever, and many pop-punk fans have turned to TikTok in particular.

"It's definitely connecting all the right people and creating these massive communities online," says Kit Dickson, a pop-punk creator on TikTok with over 130,000 followers. "I think over the past year, because of COVID-19, this idea of community has become massive. People are looking for others to connect with so they feel less isolated."

Yasmine Summan – who has 77,000 followers on the app – agrees, suggesting that this unprecedented isolation is causing people to indulge in music they find familiar and comforting: "Everyone's home alone right now. They've got nothing to do."

When the outside world is scary and strange, it makes sense to look for the opposite in music; the soundtracks from our past are an escape to better times, and a reliable way to feel good. This is reflected in the pop-punk songs going viral on TikTok: on top of All Time Low’s viral success, 4 million people – including Will Smith – have used Simple Plan’s classic song I’m Just A Kid to soundtrack ‘then-and-now’ family photos; Paramore’s All I Wanted has featured on over 40,000 clips, from singing challenges to heartwarming relationship videos; and even Avril Lavigne’s 2007 track Girlfriend had its moment as part of the ‘side-profile challenge’. All of these songs found success in the 2000s, the formative years of TikTok's primary demographic of 16-24 year olds.

These viral sensations are also introducing the genre to a new generation of fans. Maddee, 17, creates pop-punk videos for her 12,000 followers and has noticed more of her peers enjoying the music: "I had a friend who's not into pop-punk at all and he was singing Dear Maria…, and I was like, ‘How are you…?' and he's like, ‘Oh, I saw it on TikTok!’" she recalls.

But it’s not just classic pop-punk tracks receiving all the attention – newer releases are getting in on the action, too. Waterparks – who released their debut album in 2016 – saw their track I Miss Having Sex But At Least I Don’t Wanna Die Anymore go viral last year. It’s been used almost 35,000 times by TikTokers, and is now the most streamed track from their 2019 album FANDOM – despite never being released as a single.

Speaking about the song’s popularity and the benefits of the app in general, frontman Awsten Knight told The Hard Times Podcast: “It’s so music focused… TikTok is the first thing since [MySpace] where it’s actually giving a platform to music creators.”

TikTok pop-punk fandom doesn’t stop at viral hits, however. "One of my more popular TikToks was just listing a bunch of pop-punk songs," Maddee says, "and a lot of people commented like, 'I've never heard this genre before, do you have any song recommendations?’'' In response, Maddee shared a playlist featuring a broad range of bands, from The Starting Line to Stand Atlantic.

You'll also find videos that share the genre's history for newer fans. "I try and do these educational videos to make people feel a bit more welcomed to the scene," Yasmine explains, emphasising that gatekeeping is a sure way to put off newcomers while also recognising that some fans will move on and others are cultivating a core fanbase on the app. Either way, it’s important they all feel accepted.

So pop-punk die-hards are revelling in their nostalgia, bringing both old and new fans along for the ride… but why on TikTok in particular? Well, for one, there's less work involved in discovery compared to other platforms. Open the app and you're greeted with a curated For You page, which constantly adjusts the content according to your interests, determined by previous positive interactions.

“TikTok's algorithm is unlike any other,” Yasmine says, explaining that all you have to do is check out #poppunk once and the content will begin appearing on your For You page. So if a lot of users are feeling nostalgic, lonely, or just missing live music, liking one pop-punk clip will trigger a positive feedback loop of similar videos, which TikTok can then push to other users it deems to like similar things. What makes TikTok the go-to app for funny videos is also what makes it ideal for discovering both established and underground bands. "The algorithm is really helpful if you want to dive in headfirst and have a whole pop-punk phase," Yasmine confirms.

This love for pop-punk isn’t confined to phones, though; it’s also breaking into real life. It makes sense that fans discovering the genre this way would check YouTube and Spotify to find more, and perhaps if you're young enough to have missed pop-punk’s heyday, your first port of call would be TikTok.

Chart-topping artists are also drawing on pop-punk influences, propelling the genre's renewed popularity beyond TikTok. Machine Gun Kelly and YUNGBLUD both released alternative albums in 2020; MGK's Tickets To My Downfall debuted at Number One on the Billboard Hot 100 (the first rock album to achieve this in over a year), and YUNGBLUD’s Weird! hit the same spot in the UK.

The relationship between the chart and viral success is symbiotic: Machine Gun Kelly and YUNGBLUD have inspired people to find out more about pop-punk, and viral videos on TikTok have also led people to the genre, often starting with the bigger legacy bands. Thanks to its success on TikTok, All Time Low’s Dear Maria, Count Me In is currently sitting at #18 on the UK Rock & Metal Singles Chart. This is the first time the song – released as a single in 2008 – has ever appeared on the UK charts.

This fusion of old and new ensures pop-punk on TikTok is looking forward, as well as revisiting the past. For Rina, whose account has 40,000 followers, TikTok is "a great mix of new and nostalgic because I still listen to the same bands I grew up on, but [I] have also discovered modern pop-punk bands".

TikTok’s ubiquity amidst a pandemic has made it the go-to place for comforting musical nostalgia, as well as music discovery and connection. Although pop-punk’s popularity comes in waves, with TikTok onside, this time it feels different. The app is pushing the genre’s growth beyond its subculture, and the impact TikTok is having on listening habits and the music industry is unprecedented. With pop-punk claiming chart positions on both sides of the Atlantic, making Spotify's viral playlists, and with a new generation of music fans getting involved, we could be looking at another mainstream breakthrough for the genre yet. Get the pizzas in.