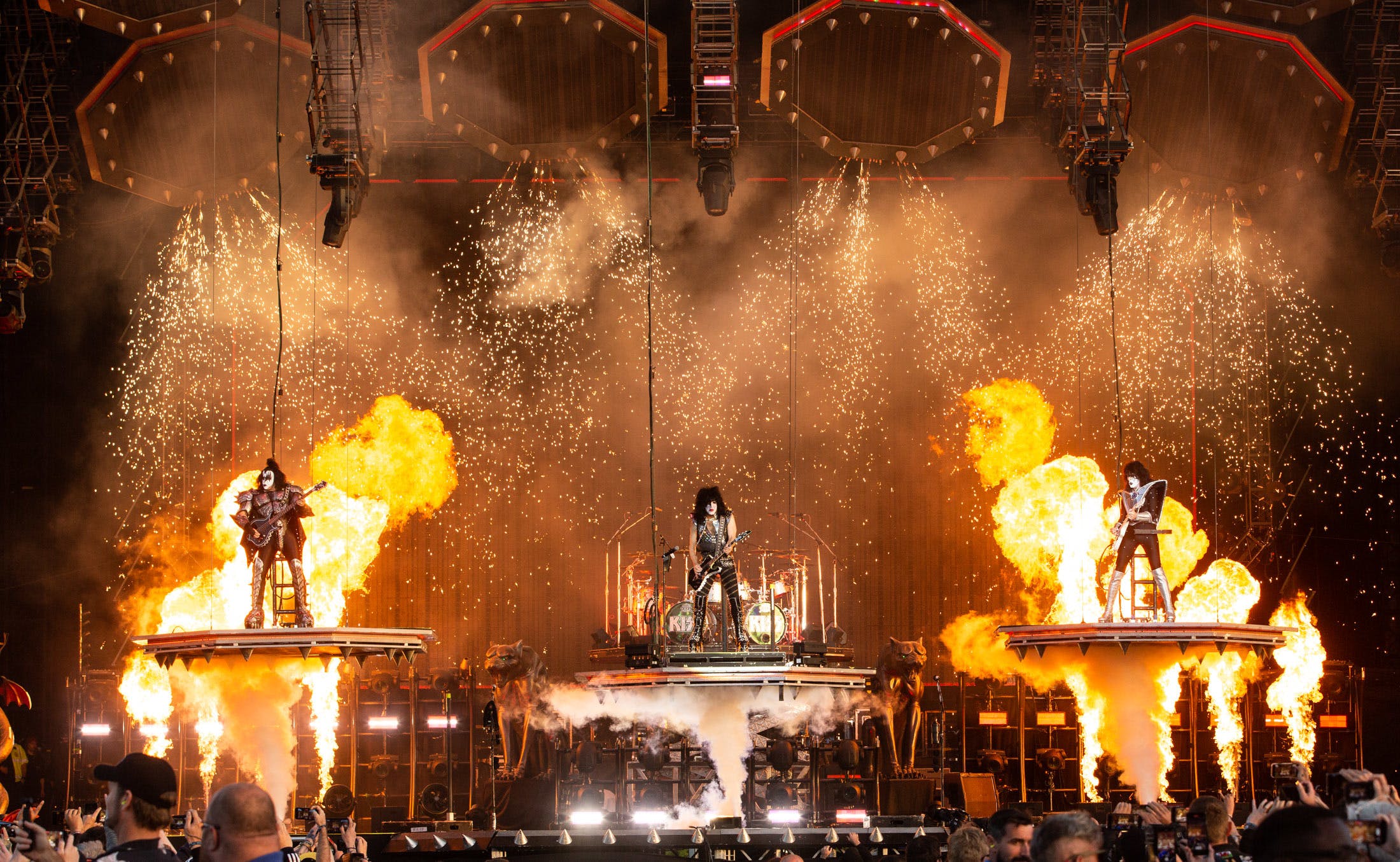 After four and a half decades of crazy, crazy nights playing the biggest of venues, KISS aren’t far off wiping off the face paint for the last time. It means that tonight, their fifth Donington headliner, is to be their last. But this isn’t a funeral – there are moments of gentle sentimentality here and there, but it’s never sickly. Instead, it’s a chance for these legends to hold a masterclass in how rockin’ and rollin’ is really done. It’s meant to be a celebration, and as celebrations go, it’s not half bad.

Soundwise, songs early on like Detroit Rock City and Shout It Out Loud sound as lean as you’d expect from a band who have been playing them for donkey’s yonks. Paul Stanley and Gene Simmons are still vocally on point even as their voices have become huskier with age. However, especially in the first part of their two-hour set, there’s something almost mechanical about it, and it means Shout It Out Loud in particular doesn’t have as much bite as might be expected. Later, Tommy Thayer and Eric Singer take the spotlight for guitar and drum solos respectively, and both feel a little self-indulgent more than spectacular, and outstay their welcome, particularly the drum solo, half of which is taken up by Eric banging nothing but the kick drums. It doesn’t feel like a showcase of skill, but more like a way to eke out their set to two hours.

Eventually, they turn it around. They loosen up as the set goes on, with more grit coming into the swaggering God Of Thunder, and it’s just after that that the set is kicked into a higher gear. It’s hard not to watch in awe as Paul Stanley flies above the crowd on a zip wire across to the sound tower for the crowd pleasing one-two of Love Gun and I Was Made For Loving You – it’s about as rock’n’roll as rock’n’roll gets. They bring it home with a quite literal bang, with fireworks exploding from the top of the stage during the triumphant closer Rock N’ Roll All Nite. Tonight hasn’t been a flawless farewell, but they’ve still left on a high.

Camp Loner: Meet the people who go to Download Festival on their own

We took a trip to Camp Loner at Download Festival to meet the people who arrive at Donington without a plan or any friends, and found heartwarming community of die-hard rock fans who just want to have a good time…

From Pikachu to Santa to an inflatable sloth, here are just some of the people that made up Download 2022. Can you spot yourself?

Biffy Clyro: “We f*cking mean it… I care deeply about this and will still be doing this in 20 years”

Over the weekend, Biffy Clyro did what they’ve done for nearly three decades: they proved that they’re simply one of the greatest bands on the planet. But, before their Download Festival triumph on Sunday night, we went to their rehearsals to find a group of certified rock legends still grappling with nerves and that feeling that they’ve never quite fit in…

Hi. Biffy f*cking Clyro are still one of the best bands in the land. Duh…

Debut UK show? Let Spiritbox take you to school, and then some…