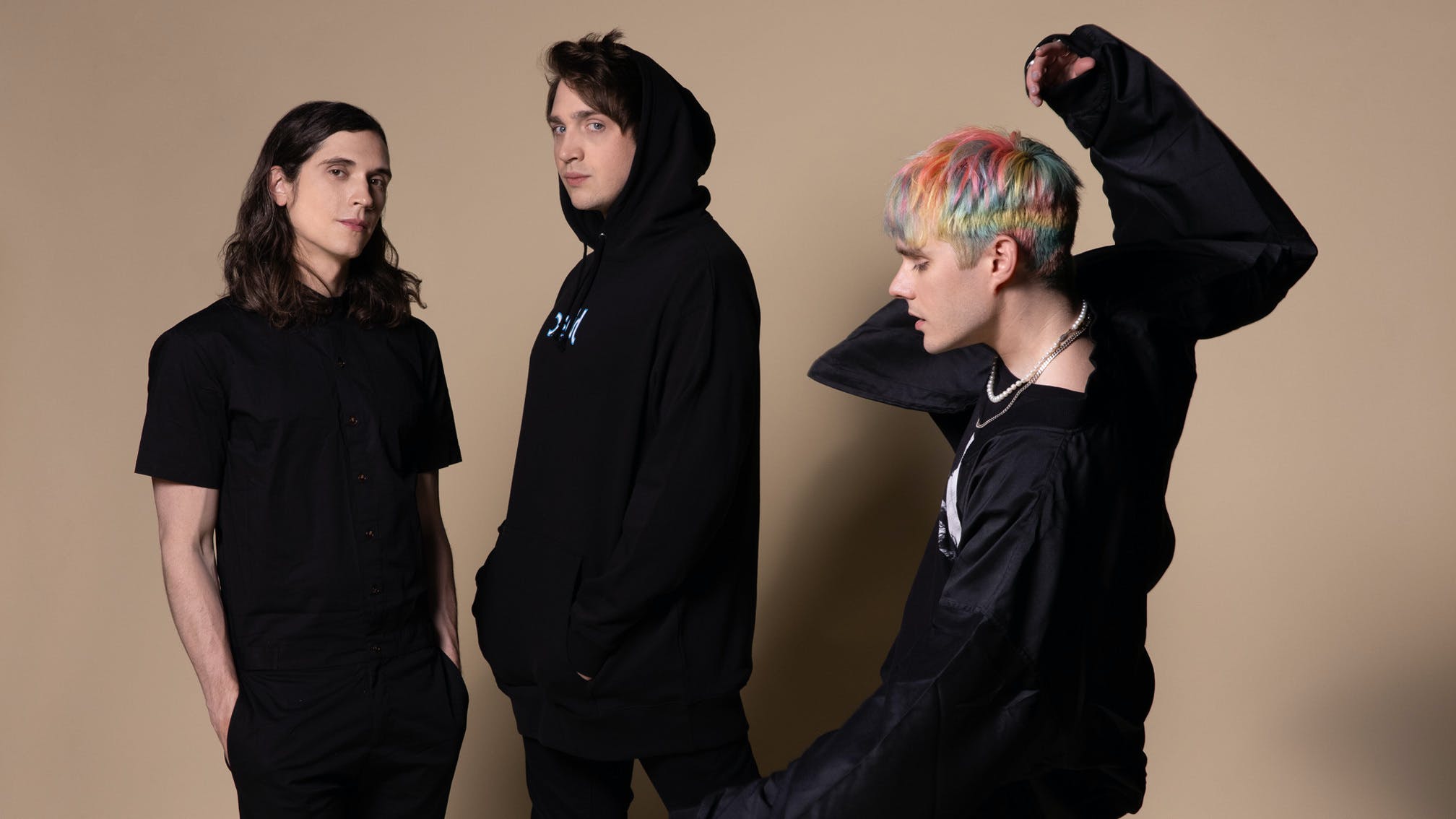 “Hey, what do you think of this colour?” In typical Awsten Knight fashion, his interview with Kerrang! is not a straight-down-to-business affair. Before any talk of his band Waterparks or their new album Greatest Hits – out now via 300 Entertainment – comes close to being mentioned, the frontman talks K! through his latest choice of nail polish, before lighting a candle and pondering how he’s “never had a pedicure… I should do something about that!” Just five minutes prior he was on Waterparks’ Twitter account announcing a limited run of signed album copies, but in some ways, despite the buzz around Greatest Hits as release day approaches, he seems keen to separate himself from all the frenzy.

“We’re shooting a couple of music videos this week and I thought, ‘You know what, I need to have beautiful nails!” he begins. “I also found out this week that Hayley Williams knows I exist because [her hair dye company] Good Dye Young hit me up online, so today is a good day.”

When talk eventually turns to band matters, the conversation inevitably moves towards that album title. Greatest Hits isn’t a compilation of previous Waterparks material, but rather a collection of 17 new songs which Awsten says are “a culmination of multiple eras of the band that people never actually got. It’s a ‘Greatest Hits’ of a Waterparks reality that never happened.”

Now, though, the Greatest Hits reality feels tangible. With a desire “not play into our past shit”, Awsten and bandmates Geoff Wigington (guitar) and Otto Wood (drums) are looking to the future, but one thing that will remain constant is Waterparks’ ability to provoke a fervent response – both positive and negative – from all who hear what they have to say.

It also begs the question of whether the knowingly-titled Greatest Hits is, by design, meant to be antagonistic and braggadocios, something to which Awsten has a steadfast response.

“If you're not poking with your music, then you’re just so safe and boring,” he offers. “I know there are exceptions and not everybody wants to poke, but if your art’s not getting a strong reaction then what are you doing?”

Greatest Hits is undoubtedly a provocative album. On a base level, its musical approach of continuing to push the envelope and layering an array of electronic sounds over the top of poppy rock songs is a sure bet to irk the purists, but it’s a record with something to say, too. And while its words might not be philosophically profound or earth-shattering, they’re unflinchingly honest and at times deceptively dark.

One track on Greatest Hits which exemplifies this is LIKE IT, an in-your-face, aggressive and angsty pop song in which a pissed-off Awsten takes those who seek to undermine his artistry to task. It’s very reminiscent of Waterparks’ 2018 track TANTRUM which saw the vocalist ask, ‘If I wasn’t thin and white with blue hair would I be here? / Maybe if I kill myself you’ll know I’m sincere.’ Put it to the vocalist that LIKE IT and several other songs on Greatest Hits recapture that hostile energy, and Awsten reveals that TANTRUM was in fact the genesis for much of what Waterparks’ new album ultimately became.

“TANTRUM was the gateway for so many of these songs,” he explains. “That was the first time that I really said things in a blunt way. When TANTRUM happened and I listened back, I was like, ‘Can I fucking say that?’ But the answer was yes, and that made me feel really excited. To be completely honest, there’s a part of me that likes to talk shit, and it was so satisfying to say that stuff and just be so fucking direct. That feeling really fed into this album, and made me want to make songs like Numb and LIKE IT which are really important to this record.”

Those songs of which Awsten speaks bring an intensity to Greatest Hits which has never been present on a Waterparks record before, but straight-talking lyrics are just one facet of the album’s altogether more perilous tone. Paranoia – perhaps unsurprisingly given recent single You’d Be Paranoid Too (If Everyone Was Out To Get You) – is a significant lyrical theme, but its origins aren’t merely the result of confrontations with others. Greatest Hits is an album that was largely created at night, when the lights were down low and Awsten was alone with his thoughts. There’s a dream-like feel of a blurred reality throughout, as songs like the title-track and The Secret Life Of Me conjure a hallucinatory quality to the band’s output. It turns out that much of this is down to the fact that Awsten has been having constant nightmares for the past three years, with those experiences feeding into a loose concept from which Greatest Hits was born.

“The idea for this album is that it takes place over the course of a single night,” Awsten outlines. “That's why this feeling of paranoia plays such a big part. Our last album, FANDOM, was a very cyclical thing, and this album is too, but the scary thing with this one is, like with my nightmares, it comes full-circle and you have to relive it again. As you get towards the end of the album you get to the track Ice Bath, which is literally meant to be the wake-up moment where you come out of this dream-like state you’ve been in for much of the record. But then the final song See You In The Future hits you, and that track is all about how real life is actually so much more chaotic than this horrifying dream you’re living every night. With my nights having been like that for so long, I really wanted to design an album that reflected those experiences, and show what reality is like for me in a post-FANDOM world.”

The vast array of sounds present across Greatest Hits combine to provide an otherworldly quality to the music, which echoes Awsten’s desire for the album to conceptually play out like one long dream sequence where realities are blurred and nightmares feel all too real. The title-track kicks things off with Awsten declaring, ‘Last night I had the strangest dream of all,’ before the likes of twinkly synth-based number Fruit Roll Ups, ambient alt.pop single Snow Globe and Gladiator’s dancefloor funk send you on a journey through the night that’s equal parts unsettling and sophisticated. The confident pop-rock pep that Waterparks have always had remains – just listen to vibrant first single Lowkey As Hell and the shiny neon-pop of Violet! – but it’s clear that more thought, more blood, sweat, tears and nightmares have gone into Greatest Hits than any of the band’s previous records, and the result is their most accomplished work yet.

Unsurprisingly, the composition of this complex album has proved Awsten’s greatest challenge to date. Having spent countless nights scrutinising every aspect of the music right down to the tracklisting, transitions between songs and call-backs to previous Waterparks records, the knowledge that his band’s self-declared Greatest Hits will soon be upon the world has provided him with some comfort and closure, particularly because it’s felt so long in the making.

“Most of these songs were effectively written in another world,” he concludes. “Numb, Snow Globe, Just Kidding, The Secret Life Of Me, Crying Over It All… these tracks are things I’ve been sitting on since January 2020, before the pandemic. It’s been so long that I’ve started to question whether this stuff is actually any good. Greatest Hits has been such a huge part of my life for such a large amount of time that it’s just going to be a relief to get it out there, even if people fucking hate it!”

Despite that uncharacteristic hesitancy, Awsten needn’t worry about Greatest Hits’ ability to connect with listeners. There’ll always be haters, but what he, Geoff and Otto have made with their latest album is the best representation of the fun, creativity and character that’s always been at the heart of Waterparks. And that’s something pretty great.

Waterparks’ Greatest Hits is out now via 300 Entertainment.