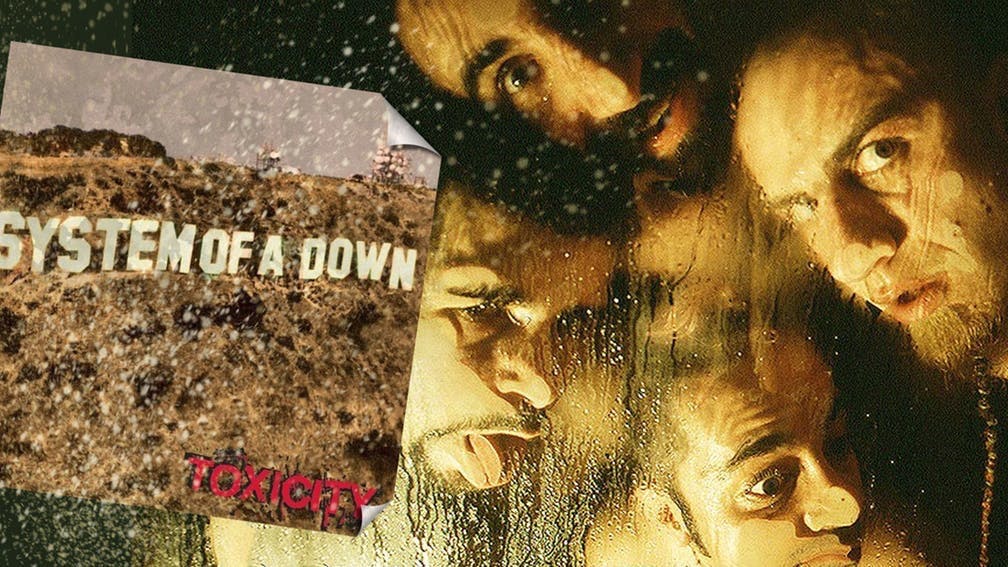 On September 3, 2001, System Of A Down were due to play a free show in a vacant lot in Los Angeles. The band would release their second album Toxicity the next day and wanted to thank the fans in their native city. As more and more people tried to cram into the venue however, tensions began to grow, causing riot squads and mounted police to set up camp at key points.

As Kerrang! reported at the time, employees from SOAD’s record label Columbia told members of the press to leave. Like, right now.

Moments later the announcement was made that the show had to be cancelled due to safety fears. The stage was immediately stormed by angry fans and the scene descended into a full-on riot. Towers of amps were toppled into the crowd and people could be seen through swirls of tear gas smashing everything in sight.

It was a fucked-up situation all right, but it did suggest that System were a band poised to explode.

When they released their self-titled debut three years previously, the world didn’t quite know what to make of them. Some cast SOAD as a new Rage Against The Machine due to their fiery political elements, more lumped them in with the nu-metal set, but there was always something different about System Of A Down. Something poetic and fiercely intelligent. Something sinuous and unpredictable.

“Sometimes ‘quacky’ might be a guitar, sometimes it’s Serj’s vocals,” guitarist Daron Malakian explained as Kerrang! joined the band for the mixing of Toxicity at Enterprise Studios in Burbank. “There’s a circus-like vibe to this band. A friend of mine was listening to our new music the other day, and he said it reminded him of a Warner Bros. cartoon. He wasn’t really talking about the themes of the music, but about the funny sound effects: ‘Bik-ting-tah!’…”

They certainly had their cartoonish side, but in other respects Toxicity was a far more serious proposition. Partly inspired by their love/hate relationship with LA, the album also dealt with issues such as addiction (Chop Suey!), mass incarceration (Prison Song) and, uh, group sex (Bounce).

Not that it was always entirely clear what frontman Serj Tankian was warbling about at any given time. “I don’t know what it means, but I know how it makes me feel,” said producer Rick Rubin of the title-track. “It’s like a lot of Neil Young songs, where the lyrics don’t necessarily make sense, but they give you this feeling of something going on.”

Perhaps the most controversial song on the album was the Daron-penned ATWA, as it was inspired by infamous cult leader Charles Manson.

“I collect a lot of Charles Manson’s stuff and I have all his parole hearings,” the guitarist told us, before going on to explain that the song’s title referred to Manson’s environmental movement ATWA (an acronym for ‘Air, Trees, Water, Animals’). “When they only show a few seconds of what Manson is saying on television, like him saying, ‘If I was going to kill, I’d kill everybody’, they don’t show you what he said for the hour leading up to that statement,” he continued. “There’s a whole other side of Manson that isn’t so evil, but is actually very just and very right.”

Musically, Toxicity saw the Armenian-American band build on the lurching unpredictability of the debut, branching off in even more directions. One of the key moments is also the most understated; a hidden track commonly known as Arto as it featured a guest appearance by Arto Tunçboyacıyan, a folk and jazz multi-instrumentalist of Armenian-Turkish descent.

“There’s no guitars or anything on that one,” bassist Shavo Odadjian told MTV. “We used these Armenian instruments and we all chanted. It’s really emotional, and my mom cries every time she hears it. I wanted to remember all the Armenians that died in 1915 during the genocide.”

Elsewhere, there were plenty of guitars. “I’ve never heard my music sound so good,” Daron enthused during the mixing of the album. “I personally thought that our first album was not as thick-sounding, as bulky-sounding as I would have liked. So I put down, like, 12 tracks of guitar on every song this time, just to make sure that it’s got balls.”

The initial recording sessions had resulted in more than 30 songs, all of which they felt were good enough for an album. The band members voted for which would make the final cut apart from main songwriter Daron, who had to step back from the process. “I spent too much time with each one of them,” he told us. “It was too tough for me to choose.”

The rejected songs from the sessions would later end up surfacing on the internet, packaged as Toxicity II. “These tracks are unfinished and don’t reflect the group’s high standards of recorded sound,” they said in a statement. “We are disappointed that our fans are listening to anything less than the best possible recordings from System Of A Down.”

In typically subversive style they reworked and released most of the material on 2002’s Steal This Album! – something of a statement in a pre-streaming era when the conversation was all about illegal downloads.

But we’re getting slightly ahead of ourselves. The day after the riot in LA, System Of A Down released Toxicity, which was a huge and immediate success. The album, which would go on to sell more than 12 million copies worldwide, shifted 220,000 in its first week and surged to the Number One spot in the U.S. Billboard 200. It did this just as the events of 9/11 changed the world forever. Lead single Chop Suey! – originally titled Suicide – was placed on radio operator Clear Channel’s list of ‘lyrically questionable’ songs and effectively removed from the playlists of more than a thousand U.S. stations.

Their momentum at this point was unstoppable though, and System would go on to be the dominant metal force of the early 2000s.

“We’re now in a position where we can tell people to judge us for who we are,” drummer John Dolmayan told us shortly before the album’s release. “We haven’t changed our nationalities, we still believe in voicing our opinions, whether it’s political or social commentary, or about eating pizza. Everybody wanted us to be Rage Against The Machine when we first came out. We’re not.

“It seems like all of our hard work is reaching its fruition,” he concluded, little knowing just how right he would be proven.

System Of A Down’s Serj Tankian has revealed that he composed the music for the new season of Down To Earth With Zac Efron, which hits Netflix on November 11.

System Of A Down and Korn announce new 2022 shows

Serj Tankian gives COVID update: "I am doing well and hoping to be clear of all symptoms soon"

System Of A Down frontman Serj Tankian believes that "being vaccinated helped minimise my symptoms and suffering" after testing positive for coronavirus.

Serj Tankian tests positive for COVID; System Of A Down reschedule upcoming gigs

System Of A Down have announced that their Los Angeles shows have been postponed to 2022 following frontman Serj Tankian's positive COVID-19 test.

System Of A Down: Here's the massive setlist from the band's first gig back

System Of A Down debuted recent(ish) singles Genocidal Humanoidz and Protect The Land, as well as playing a whole load of Toxicity, at their first show since 2019…

Korn to replace Faith No More on System Of A Down’s U.S dates

Korn will step in after Faith No More stepped down, citing Mike Patton’s mental health…