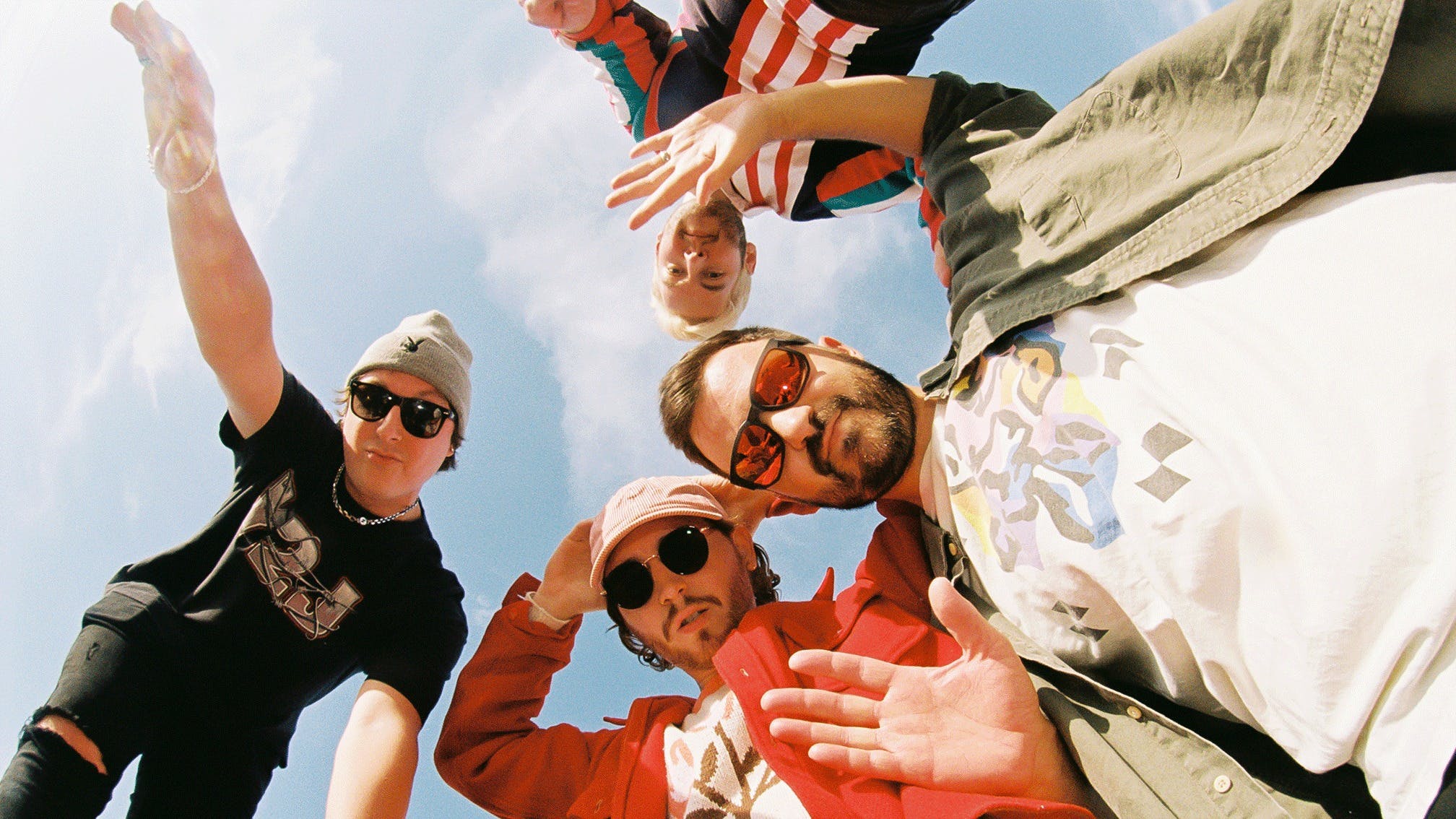 “Pop culture is changing and music is changing,” explains State Champs frontman Derek DiScanio of the pop-punk and emo revival in the charts this past year, thanks to artists such as Machine Gun Kelly and WILLOW, plus the literal Spotify Song Of The Summer (Olivia Rodrigo’s Good 4 U) being inspired by a Paramore track.

And, as one of the most authentic and well-respected bands in pop-punk, the upstate New Yorkers are ready to use this mainstream sonic shift to their advantage, with a little help from fourth record, Kings Of The New Age.

“It’s giving a lot of exposure to new and young fans that have never heard of bands like us,” elaborates the singer, “and this album is us saying: ‘Hey, we’ve been doing this for a long time, and we’re fucking good at it – maybe the best at it! – so you need to check this shit out if you like that stuff.’”

And there’s plenty for prospective listeners to enjoy before the album drops on May 13 (with a UK tour commencing May 8), in the form of Outta My Head, Just Sound and brand-new single Everybody But You featuring Ben Barlow.

We caught up with Derek to talk feeling old as heck, songs about phone sex, and why confidence is key…

Derek! From the three singles we’ve heard so far, the new album is feeling pretty nostalgic…
“Yeah, this is our fourth album and I feel like every band – and we’ve been guilty of this with our second and our third records – says, ‘Oh this album’s way more mature…’ Literally, it’s what everybody fucking says (laughs). So we went back to our roots and reminded ourselves of why we do this. We’ve been a band for over 10 years now, which seems crazy, because we’re still a pop-punk band; we’re not getting any younger but we had to find a way to come back and love what we do. To love this youthful, nostalgic music that we make. So we didn’t wanna take ourselves seriously this time around; we wanted to have fun and let loose, and show a bit of immaturity and rule-breaking. That’s what Kings Of The New Age is.”

You’ve said the record is a “reminder that we’re only here for so long” and to “never waste a moment that can be seized” – is that a mindset you’ve always had? Or did the difficult past couple of years bring it on?
“I've always been an optimistic, happy-go-lucky guy, but in the past year with everything that’s happened, it’s the first time I’ve had mental and physical challenges. I thought, ‘Man, I don’t know if I’m ever gonna have this career again…’ and it puts you in this weird, dark place. Also, I’m getting older – I'm approaching 30 and never really took care of my voice. I started realising, ‘Oh, this thing changes if you don’t take care of it…’ so I had to make necessary lifestyle changes. I’m in the gym now and I’m taking vocal lessons, and I didn’t realise how much better it’d make my mental state and my body feel. I just thought I was gonna be a rock star forever (laughs), and that’s only as realistic as the work you put into it and the luck that comes around it. So it all made me think, ‘What am I even gonna do if this were to stop? Am I just gonna hit rock bottom?’ That was a tough time, for sure.”

How did you deal with those thoughts?
"I started taking trips, spending time with family, and becoming a bit of an entrepreneur, taking my clothing brand, Steez Brand, pretty seriously, while still focusing on the band too, just writing, writing, writing in the off time. Also, I was thinking [about the fact we’re all almost out of our 20s] and we’re a pop-punk band… so what is the deal here (laughs)?!”

You’ve mentioned you guys getting older a couple of times now, is it something you’ve paid a lot of thought to?
“Yeah! We’re about to come up on the 10-year anniversary of The Finer Things [in 2023] and that’s crazy! Like, are we about to go on a 10-year anniversary tour?! That's only something those old-guy bands do (laughs). The first song on the album is called Here To Stay and it talks about how we first started – there’s references to our first time playing Slam Dunk [in 2014] and being excited that this is our career! But it also talks about how we’ve been doing this for so long, but it’s time to remind everyone that we’ve been here and we’re here to stay. With bands like us, for so long we were encouraged to be humble for what we have, but that doesn’t work anymore. Times are changing! Rappers can talk about how sick they are, and say they’re the GOATs… it’s become a battle of who’s cooler and more popular, which creates cool, fun competition, and that’s what we’re trying to do, to say: ‘We’re sick at this!’ And it’s made us more excited about this new chapter.”

What are some other lyrical themes on the record?
“There's a little bit of everything – there's still a lot of angst, there’s break-up songs, especially with the new single Everybody But You. It talks about ending a toxic relationship and removing somebody from your life, being upset and down about it, but then what’s the best way to get over someone? Hanging out with your friends and throwing the biggest party ever! And that’s what the music video is. That’s probably our favourite song – it’s back to our roots, The Finer Things style, but it also brings this whole new modern approach with the production, as it's got hip-hop elements and beats to it too. It reminds me of Gives You Hell by The All-American Rejects, but it’s got so much more pop-punk State Champs power to it.”

And what’s the most powerful track for you personally?
“Eventually hits home for me the most: it’s got the story behind the past couple years and dealing with the mental and physical challenges. The chorus is, ‘Started running from what made me paranoid,’ which is me being in my own head about [my voice failing] and with the pandemic, but then the second half of the chorus is, ‘I’m taking back the one thing that felt permanent’ in my life, which is State Champs and my career. So it’s me feeling confident again and finding that motivation to make [our career] last as long as it can. I think that’s gonna be another single before the album comes out.”

We hear there was something… interesting… inspiration behind Just Sound, too?!
"It’s about FaceTime sex, essentially (laughs). No-one really got that. It sounds like a love song, until you realise how specific it is: ‘Ride tonight with just sound / Up too high to come down / With your face reflected / We'll stay connected / Till it all comes back around.’ I think it might be the most risqué State Champs song so far (laughs), so it’s kinda cool to take that approach, but subtlety, and let the fans figure it out. We’ve always stayed so broad in the past and been like, ‘This is about a dark time and overcoming it,’ but we came into the studio one morning and were like, ‘Has anything happened to anybody recently? Like, specifically that you wanna talk about that we can put into a song?’ And I jokingly said, ‘I'd write a song about phone sex today – that’d be funny!’ And the guys were like, ‘Alright!’ So we did that and it was fun!”

You’ve been a lot more collaborative as a band this time, too, all pitching in with each other’s writing duties in the studio…
"Yeah, Ryan [Scott Graham, bass] and Tyler [Szalkowski, guitar] have been very on me about lyrics I write, like, ‘Yo! You gotta rewrite that because it doesn’t mean anything and you know it,’ and I'm like, ‘Yeah, you’re right and I gotta go back!’ Or they’ll help me with something they’re going through and say, ‘I relate to this because this means this to me, and now I wanna vibe with you on this…’ and throw stuff at you to help you. So it’s been a cool team effort with the lyrics. Sometimes it makes me annoyed that I have to go back, and back, and back [rewriting things], but that’s what brotherhood is and being a band for 10 years.”

And what have you learned about yourself over this past decade?
“One thing that’s different now is I've always kept everything in and never talked about anything, except in songs, but with this album I’ve learned to be more open to talking about what songs are about, especially with my bandmates. Like, ‘I’m going through this hard time and here’s why…’ and it allowed us to have an open conversation which made me feel a lot better. Everybody goes through that shit so it’s okay to talk about it. I never wanted to be a burden on anybody [in the past] – my bandmates always saw me as a brick wall, like, ‘This guy never gets upset! He never wants to talk about anything…’ so it’s cool to feel a little bit more vulnerable.”

And, finally, did you have any worries in the studio?
"Yeah, we were like, ‘Damn, nobody’s touring, so everybody’s gotta be in the studio making new music and it’s all gonna come out at the same time once this is over and there’s gonna be so much competition!’ But we’ve definitely done our best and know this album won’t just get lost in the abyss or anything. I don’t have to tell people to go find it and make sure to listen to it because it’ll find you! So I’m excited for everyone to hear everything, and once they eventually do we’ll become your new favourite band – and we'll see you on tour!”

State Champs will tour the UK from May 8. Kings Of The New Age is due out on May 13 via Pure Noise Records.

The big review: State Champs – Kings Of The New Age

State Champs: “We know we’re good at this sh*t. We know we’ve been here this long for a reason and we wanna showcase that”

For the past decade State Champs have been a pop-punk mainstay, always with one eye on bigger things. Now that the scene is making a bid for the mainstream, is new album Kings Of The New Age their chance to break through? Frontman Derek Discanio thinks so, and he doesn’t care who knows it…

State Champs have released the next single from their upcoming album Kings Of The New Age – listen to Eventually now.

Hear State Champs' absolutely wicked cover of Fall Out Boy's Take This To Your Grave track.

Albany pop-punks State Champs have announced a 17-date UK and European tour for next May.