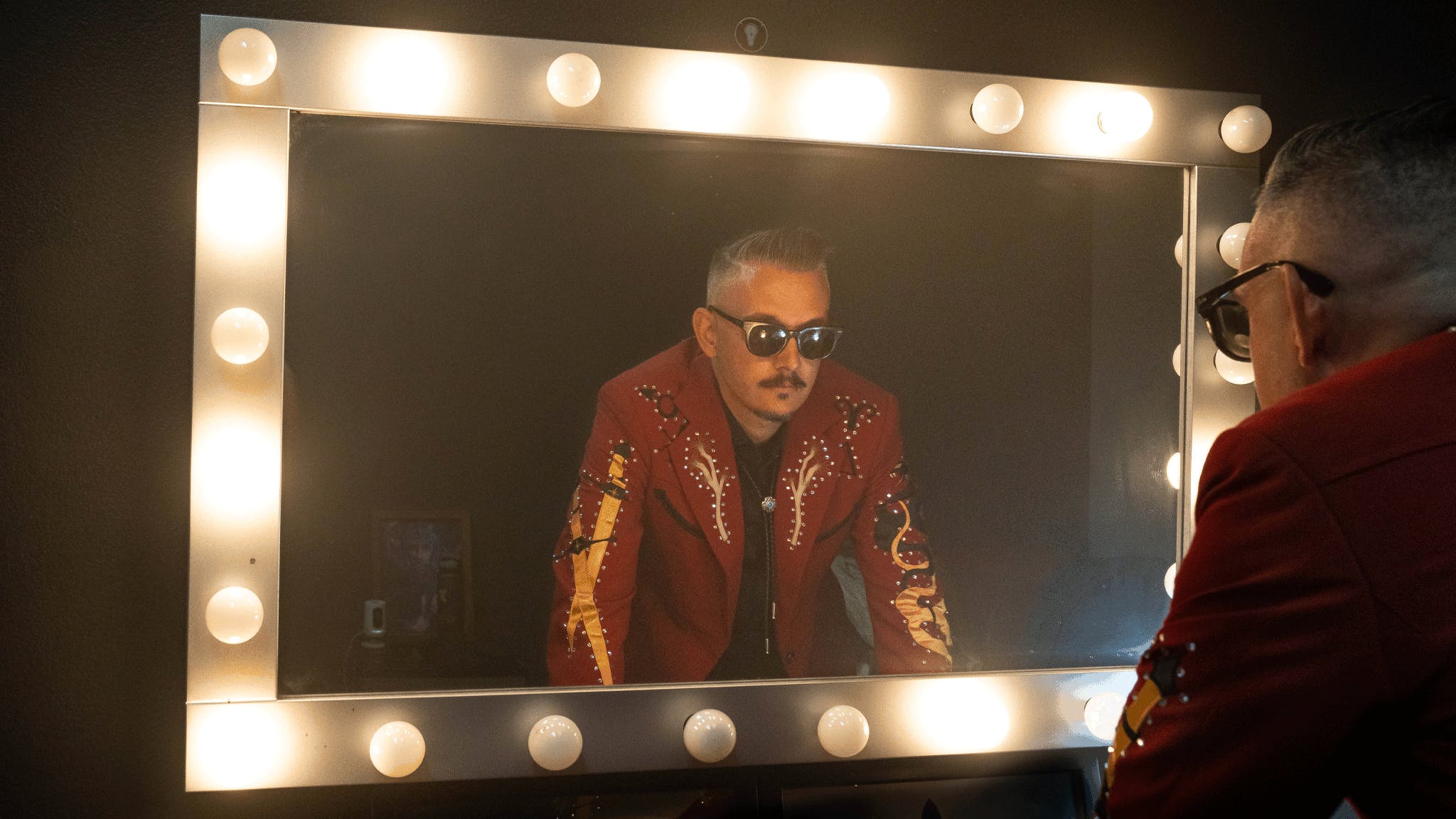 Stu Folsom always wanted a Nudie Suit. It’s an odd admission from one of modern metal’s most ferocious frontmen, but it explains a lot about SpiritWorld. This band might sound like Slayer throwing down with Hatebreed, but their dusty, rhinestone-encrusted aesthetic and weird cowboy fables were shaped by the frontman’s coming of age in the United States’ wild western sprawl.

“I grew up in a house full of hillbillies,” Stu grins, recounting his early love for country icons like Chris Isaak, Porter Wagoner and Dwight Yoakam as we collar him cruising through cowboy country on I-15 to see family in eastern Idaho. “We kept horses, goats and chickens when I was a kid. A bunch of my family competed in rodeos. For SpiritWorld shows, I’ve finally got a suit of my own, but it’s a little inappropriate for the country scene. There’s a giant Baphomet goat on the back, which is way more satanic than I imagined when I was watching those great singers growing up. I guess I couldn’t really wear it to anywhere but a heavy metal concert!”

If you’re still struggling to understand what exactly SpiritWorld is all about, searing second album Deathwestern sums it up in a 36-minute nutshell. Opener Mojave Bloodlust sets the scene with an Ennio Morricone-esque composition, combining twangy six-strings with the sounds of eagles, horses and rattlesnakes. ‘Are you anti-Christ or are you for Christ?’ asks a disembodied voice. ‘Those are your only options.’ Then all hell breaks loose. Literally. Picking up where last year’s Pagan Rhythms left off, we’re transported to a callous, bloody Old West where the gates of hell have just fallen open, as seen through the eyes of cowboys and native Comanches alike.

Crucially, we cannot overstate how awesomely gnarly it all sounds.

“I’m a hardcore kid through and through,” Stu shrugs by way of acknowledgement. After leaving the family homestead, he fell hard into Las Vegas’ no-nonsense underground scene, fronting legendary local HXC outfit Folsom through the heady days of the 2000s and early 2010s. All that learning can be heard here. We get ’80s thrash clashing with ’90s Florida death metal. The heavy grooves of Pantera and Sepultura. And there’s a taste of the cathartic, pit-rumbling chaos of outfits like Cro-Mags, Leeway, Blood For Blood and Snapcase.

“It wouldn’t be appropriate to drop in an old cowboy trail song in the middle of that,” Stu stresses that there was never any temptation to add gimmicky banjos, fiddles or pedal-steel into the mix. “I just want a record that I can listen to front-to-back and bang my head.”

Indeed, in a sense, SpiritWorld is a pent-up reaction to Stu’s stepping away from music for an extended period – and getting sober – after Folsom fell apart.

“I focused on getting my shit together,” he says. “I got a career. But I was still writing songs so I thought I’d build a studio in my house and do it for fun. Then I got the bug again. There’s something really satisfying about that act of creation. I like to have something to sink my teeth into at all times where I’m pouring my creative energy and emotion somewhere other than my day job and relationships. When I started doing this again, I realised how important that part of it is to my mental health and feeling of accomplishment. You can pick up a guitar and play, but if you don’t actually put your nuts on the table, share it with people and put out a record, it’s not the same.”

Pivotally, if Stu was going to do this, it was going to be on his terms. SpiritWorld’s early dabblings around 2017 toyed with shadowy alt. country, but it didn’t take long to gravitate back to metal. “I think right now we’re in another golden moment for heavy music,” he smiles. “There are just bands who rip everywhere.” Friends in fast-rising outfits like Power Trip and Gatecreeper had laid the trail. Upstarts like 200 Stab Wounds, Fugitive (featuring members of the aforementioned Power Trip and Creeping Death), Mongrel, Frozen Soul, Enforced kept throwing down the gauntlet.

“When you do a project like this, it consumes a big part of your life. In order to commit, it needed to be challenging stuff that I was super into. When I’m writing, I don’t do anything that I don’t like. No long solos that lose the groove. Just catchy, hard riffs. That’s why the record’s only 30 minutes long and when it’s done you feel like you’ve been hit by a car!”

Aesthetically, it’s become a scrapbook for Stu’s other loves. Influence from western cinema and classic horror like The Evil Dead, Return Of The Living Dead, Zombi, Re-Animator and An American Werewolf In London mix to potent effect. Deathwestern’s striking artwork (courtesy of James Bousema) is an open homage to the hand-painted movie posters of the 1960s.

There’s deeper literary influence, too, taking in the pulp paperbacks of Louis L’Amour, of which Stu reckons he read about 30 by the fifth grade, and more heavyweight fiction of Cormac McCarthy. Godlessness – a book of Stu’s short fiction out now through esteemed label Rare Bird – serves as a companion piece. Honky-tonk and heavy music have a shared tradition of concept album storytelling, he explains, with Marty Robbins 1959 classic Gunfighter Ballads And Trail Songs every bit as narratively driven Mastodon’s Moby Dick-inspired classic Leviathan.

“The cool thing about heavy metal is that it’s allowed to be insane,” Stu expands with a sparkle in his eye. “You’ve got bands like Amon Amarth with 80 people sitting down in the pit rowing their Viking ship at every show. I don’t think this horror western thing even feels weird.”

Speaking of people getting lost in the live show, how did he go about fleshing what started out as a one-man passion project into the band of outlaws who’ve been catching the eye of everyone from Robb Flynn to Gary Holt over the last few years?

“The honest answer is necessity,” Stu explains. “I never planned on doing live shows, but when Pagan Rhythms came out, we started getting tour offers with bands like Obituary! So my brother [Nick Brundy] plays bass, Matt [Schrum] from Folsom and Randy [Moore] who contributed a bunch of solos for the record play guitar, and I got the best ska drummer in town [Preston Harper] because I knew that he’d already been doing covers of SpiritWorld songs online! In terms of translating the concept stuff live, it’s difficult when you’re the first or second band on a four-band bill. That’s why I went loud and proud with those rhinestone suits as this really jarring thing.”

As the shows expand and SpiritWorld climb those bills, though, expect that flamboyance writ large.

“I wanna be Ghost!” Stu laughs. “I love big arena shows. I wanna have that giant production with flamethrowers and all kinds of crazy stuff, to take a horror western and bring it to life onstage!”

Ultimately, it’s that willingness that’ll define SpiritWorld in the years to come. Stressing, once again, that ‘Deathwestern’ is the current concept rather than any kind of self-defined sub-genre, Stu gestures that his sound could easily veer off in the direction of punk or alternative if the story – or his artistic needs – dictated. And although there’s still another concept album (and a written novel) of material left in the Deathwestern saga, there’s no telling where his story goes after that.

“I’ll still make heavy records,” he signs off, “but I’m approaching this with the outlook of a film director like Quentin Tarantino. I want to do my horror western, yes, but maybe then I’ll do a sci-fi. I’m not someone who thinks that having a little bit of success in heavy music makes it all you should do moving forward. I believe in doing whatever you want. If your records are good, people will dig it. Plus, it’s exciting to reinvent yourself! By the time people are properly catching on to the Deathwestern thing, we’ll probably be dressing up like characters from The Matrix...”

Deathwestern is out now via Century Media

Watch: SpiritWorld share Relic Of Damnation, the conclusion to their DeathWestern trilogy

SpiritWorld have unleashed new single Relic Of Damnation, along with a cinematic video that brings their DeathWestern trilogy to an end…

Sylosis, Heriot and more for first-ever UK Pulse Of The Maggots Fest

Birmingham will be hosting the inaugural Pulse Of The Maggots Fest this summer, with a line-up including Sylosis, Orbit Culture, Heriot and more.

Watch SpiritWorld's new video for The Bringer Of Light, taken from their upcoming album Pagan Rhythms.