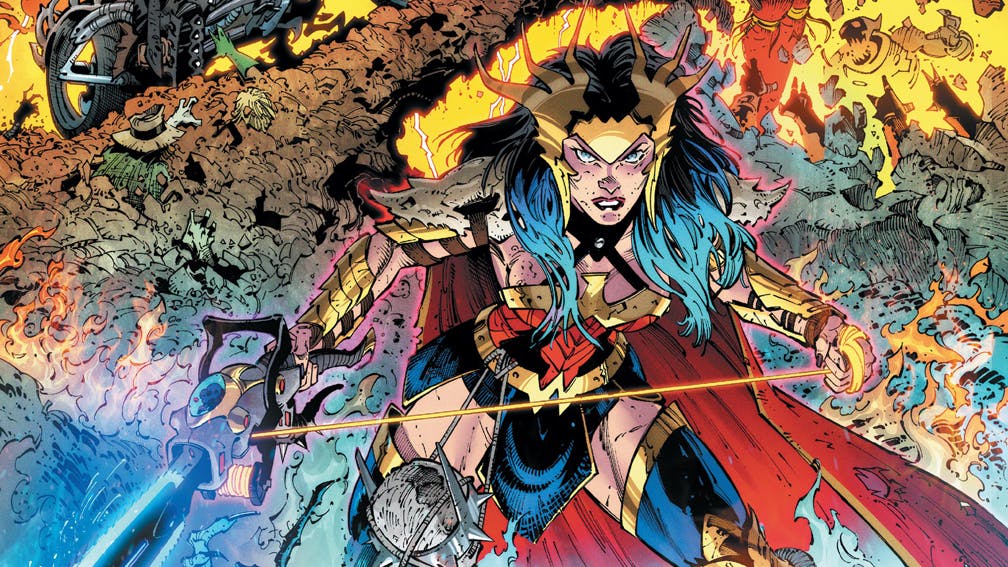 Superhero films often have a significant relationship to music. Think of the use of Black Sabbath and AC/DC tunes in the Iron Man movies, or Peter Quill’s mixtape in Guardians Of The Galaxy. What’s more unusual is for an actual comic book to have its own soundtrack, but that’s what GOTG composer Tyler Bates has produced here for Dark Nights: Death Metal, the latest of the continuity-altering mega-events that DC seems to publish every other year.

Theoretically, the bands and artists recruited for this super team-up shouldn’t hang together at all. Instead of following the title and summoning Obituary, Bolt Thrower and Dying Fetus, Tyler has opted for musicians occupying wildly different corners of the multiverse. You’re certainly unlikely to find IDLES, Rise Against, symphonic black metallers Carach Angren and indie singer/songwriter Soccer Mommy rubbing shoulders anywhere else.

However, the majority of contributors have taken direct inspiration from the series, while several have voiced characters for a short-form motion-comic version, with Chelsea Wolfe as Wonder Woman and Andy Biersack landing his dream gig as Batman. Consequently, a sinister vibe dominates, as befits an accompaniment to a horror-fuelled narrative that features a demonic Batman/Joker hybrid, evil gods turning Earth into a Hellscape and more death and destruction than the entire Slayer back catalogue.

Even if you couldn’t give a monkey’s about superheroes, there’s plenty to get excited about, what with the first new Mastodon song in ages, HEALTH collaborating with Chino Moreno and appearances from Greg Puciato and Dave Lombardo. Highlights include Chelsea Wolfe’s typically enthralling Diana and rapper Denzel Curry’s crazed Bad Luck, the latter capturing the essential loopiness of the comic. Death Metal is a worthy addition to the canon of rock-orientated soundtracks like The Crow and Judgment Night. Kapow!

READ THIS: 12 rock stars who have written their own comic books

Black Veil Brides will return to the UK next February for a nine-date headline tour – see the full dates here.

The 2021 Readers’ Poll Results: What has ruled your year?

From the year’s best albums and music videos, to movies and podcasts, here’s what has been helping you survive 2021…