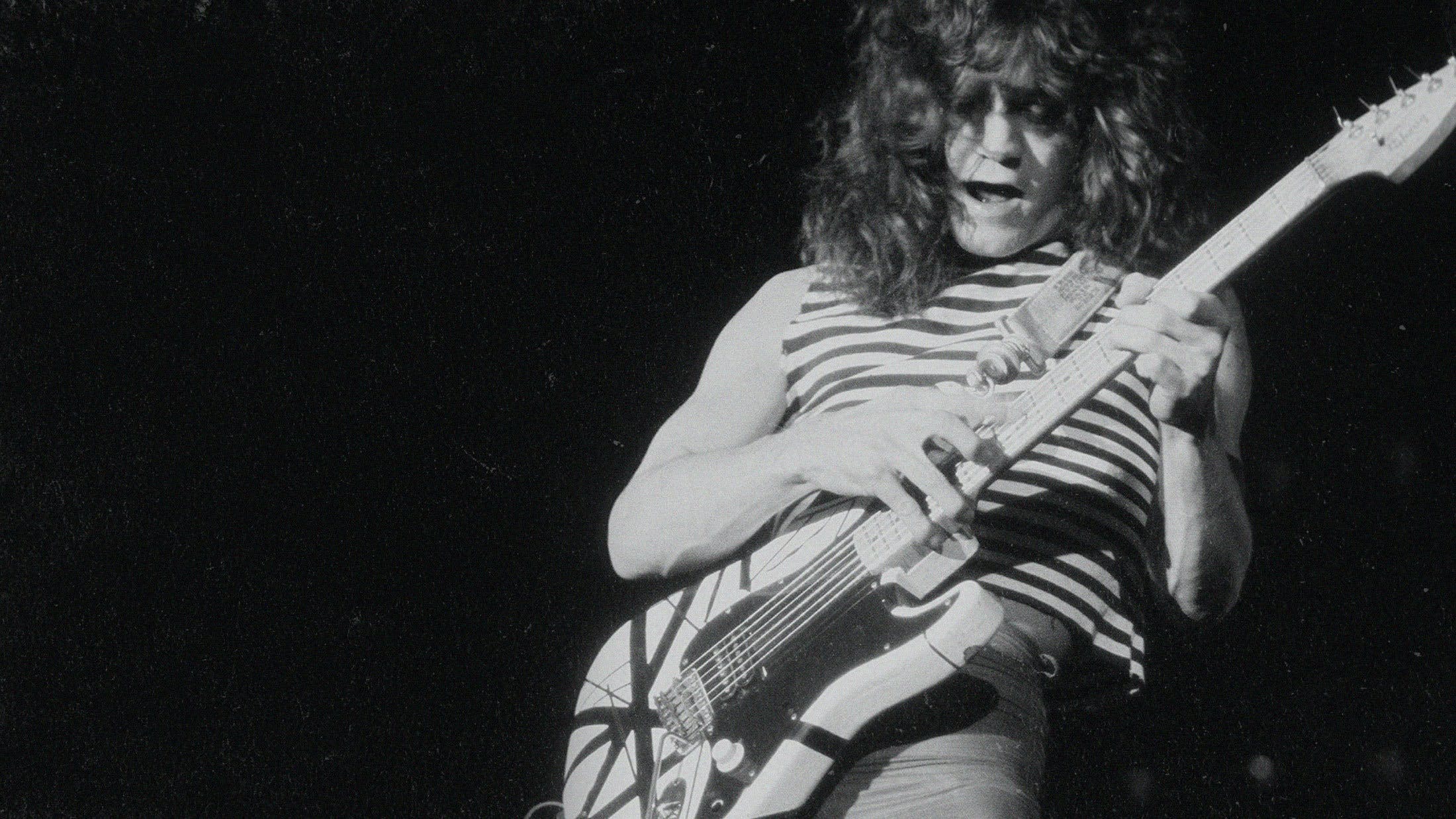 Eddie Van Halen was, by some distance, the greatest guitarist of his generation. People were saying this with no hyperbole from the first time the world clapped eyes and ears on him, aged 23, when Van Halen’s debut album exploded in 1978. In a time of guitar heroes – Jimmy Page, Tony Iommi, Ritchie Blackmore, Michael Schenker – it was like seeing colour television for the first time. He wasn’t just faster, slicker and more energetic than his forebears (although he was) – this skinny, bad-haired kid with the weird-looking, patterned guitar was literally doing things nobody had ever heard on the instrument before. When a fractured, burnt-out Black Sabbath took Van Halen out on the road in America that year, the feeling of a guard being changed could not have been more stark. Sabbs could only watch as, nightly, their support band delivered them their own torched arses on a plate with some of the most exciting music anywhere on Earth. Within two years, it would become impossible to turn on American radio without hearing them sizzling from the speakers.

Van Halen changed rock'n'roll almost instantly when they broke. With the double-threat of Eddie’s guitar genius and the flamboyant theatricality of livewire, motor-mouthed singer David Lee Roth, they had two superstars in their ranks: one a musical magician who could tear strips off anyone you could name, the other a circus ringmaster. It was an explosive combination.

The Van Halen family had moved to America from The Netherlands in 1962. With musical parents, the young Eddie would begin his own endeavours by learning the piano. Next, he would play drums, while his brother Alex took on guitar, an arrangement that was quickly swapped after the elder sibling insisted on taking sneaky goes behind the kit. By 1972, the pair had their own band, and began playing backyard parties around their Pasadena hometown. They were good. Proper good. Eddie was the best guitarist in town, and everybody knew it. But a young David Lee Roth, in a rival band, and who used to rent them a PA, pointed out the issue: “You play all 20 minutes of I’m So Glad by Cream, complete with drum solo, live, note for note,” he informed them. “It’s very impressive – but you can’t dance to it.”

With Diamond Dave on board as singer and marshalling them into a shorter, sharper shock, Van Halen became unstoppable. Between Eddie's electric musical power, and Dave’s vocal gymnastics and eyebrow-waggling gameshow host charisma, their debut album was a truly incredible record, scooping up their California cool and turbo-charging it with their guitarist’s finger-tapping wizardry. The slithering Running With The Devil, lightning-fast riff of Ain’t Talkin’ ‘Bout Love and their hyper cover of The Kinks’ You Really Got Me became hits, thrilling bursts of ultra-octane rock’n’roll to party and dance and drink and shag and have a fucking good time to, but it was on Eddie’s showcase, Eruption, that guitar playing was utterly changed. It was fast because it couldn’t be slow. It was like driving a Ferrari. Guy had to have sparks coming out of his fingers to do that.

Immediately, every single young guitarist in America tried to learn it, as Van Halen became one of the biggest bands in the world thanks to albums like II, Diver Down and the perfect 1984, featuring their biggest hit, Jump. And while the influence was most obviously felt in the glam scene that began to grow along LA’s Sunset Boulevard, with bands like Mötley Crüe, Poison and Ratt dealing in similar hard-partying music to wink at girls to, there really was nobody untouched by Eddie’s innovation and excitement. He even did the solo on Beat It by Michael Jackson. “I didn’t know what heavy music was until I heard Van Halen,” declared Slayer’s Kerry King to Kerrang!, while Metallica’s James Hetfield says the hairs on the back of his neck stood up upon hearing them for the first time, later declaring them, “The heaviest thing we had in California.” The list of names goes on, from the obvious like Megadeth’s Dave Mustaine, Trivium’s Matt Heafy and Mark Morton from Lamb Of God, to the less-so, such as Weezer’s Rivers Cuomo. The Dillinger Escape Plan would do a spot-on tear-through of Hot For Teacher, while Mike McCready of Pearl Jam – not a band noted for their banter – has been known to blast out Eruption live. And when Pantera’s Dimebag Darrell was laid to rest, Eddie’s yellow and black axe from the back cover of II was placed in the KISS coffin with him.

But for all the players who tried to emulate Eddie – no matter how many signature Peavy 5150 amps, EVH phaser pedals or striped Frankenstrat guitars they had – nobody played like him. Part of his energy came from sounding like his instrument was about to fracture with the strain, as he hammered and bent and pulled at the strings to conjure up those noises that he did. When, following 1984, Dave quit to go solo, phenomenally talented as his new guitarist Steve Vai was, he still fundamentally wasn’t the real McCoy. It wasn’t the same. Van Halen’s post-Dave success, however, continued to bloom with new singer Sammy Hagar. When they did reunite with Dave in 2012 for a new album, A Different Kind Of Truth, and a huge U.S. tour, that old magic was still there, older maybe, but still with the same magnetic dynamic between the man on guitar and the man with the mic.

Eddie Van Halen didn't just play guitar - he truly loved it. In countless interviews, he spoke of how he was never happier than with his instrument, of how, when his brother would go out partying as a teen, he'd sit and work on his chops, purely for the joy of it. Even as he battled cancer, the man simply would not put it down.

It’s sad that the UK didn’t get to say goodbye one last time before Eddie’s passing. The band last played here with Dave in 1984, a phenomenal set at Donington (up on YouTube, if you want to see just how hard they went at the peak of their powers), and the last time they were here in any capacity was 1995. But, even though there was to be no final Download triumph, as we wished for every year, what we have is something more personal. Panama, Jump, Drop Dead Legs, Ain’t Talkin’ ‘Bout Love, Hot For Teacher, Unchained, Why Can’t This Be Love? – these remain the sound of fun and friendship and bants and eternal youth, songs to laugh and go wild and fuck and feel alive to. To have asked for more from this most brilliant and inspiring of musicians would be greedy.

For night four of The Hanukkah Sessions, Dave and Greg pay tribute to “quite possibly the loudest and proudest of hard rocking Jews, David Lee Roth”

On her latest appearance on Jimmy Kimmel, Billie Eilish reminded the host of her viral 2019 interview in which he made her "look a little stupid" for not knowing who Van Halen were.

The 12 best metal songs for karaoke

Have to perform in front of a small room of tipsy friends? Here are 12 surefire metal songs that will slay at karaoke…

The late, great Ronnie James Dio will be honoured on July 10 by members of Judas Priest, Tenacious D, Guns N' Roses, Halestorm and many, many more.

Wolfgang Van Halen: “Playing music has been written in the stars for me since I was a little kid”

Since he picked up the bass for the band bearing his family name, Wolfgang Van Halen has looked to the manor born. Striking out with solo debut Mammoth WVH, however, the second-generation superstar promises plenty of surprises…

Wolfgang says he hopes to speak with The Recording Academy about Eddie Van Halen's legacy, as well as rock as a whole.