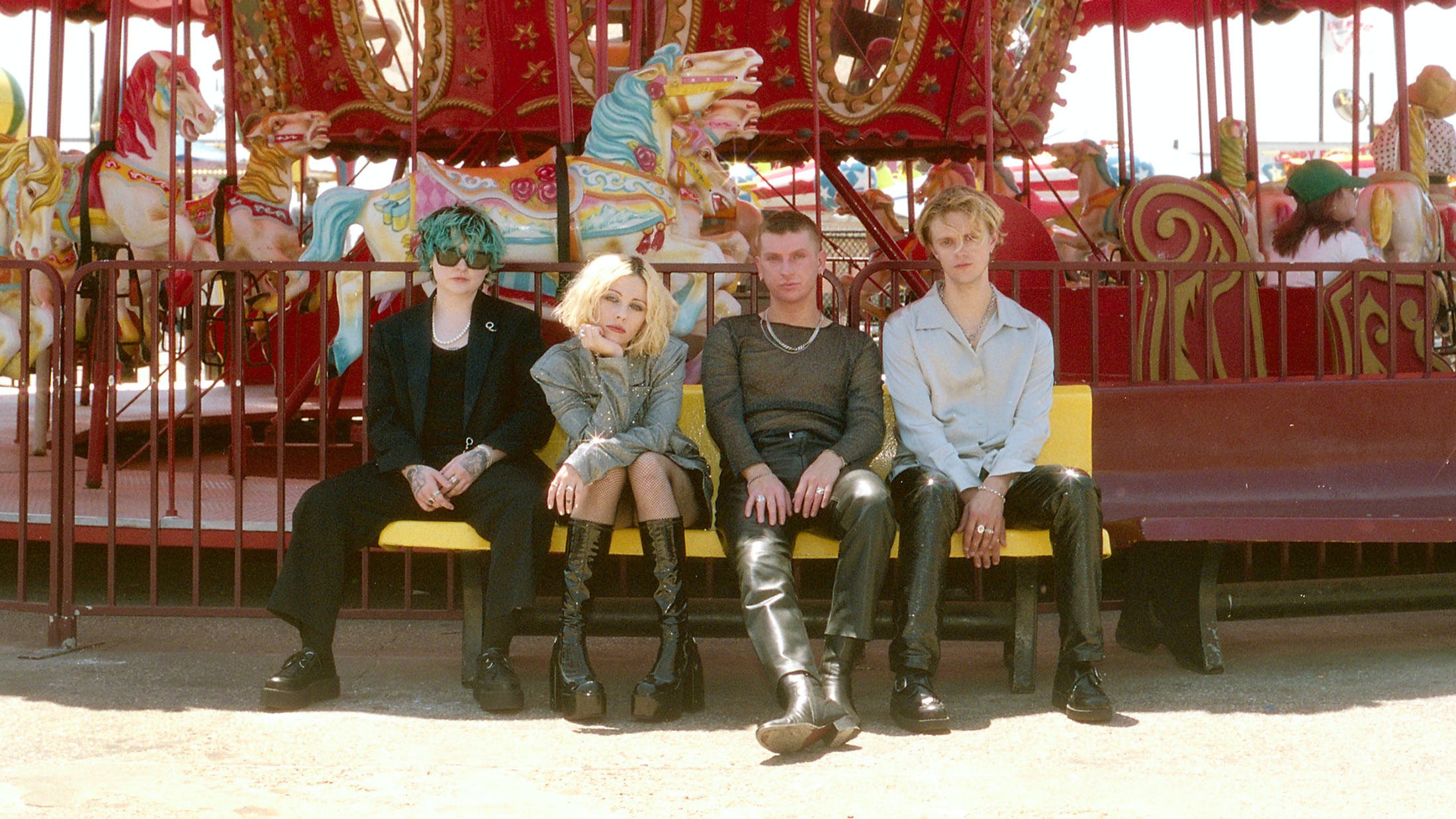 Pale Waves are 3,000 miles from home and gathered in a sweltering backstage area. Camped out on a hard-worn sofa, the four-piece are prepping for their opening slot at Mohegan Sun Arena in Connecticut, supporting 5 Seconds Of Summer. Bicon Lady Gaga has played here, New Jersey legends Bon Jovi too, and now it’s time for the next generation of misfits…

Vocalist Heather Baron-Gracie and drummer Ciara Doran first met at BIMM Institute university, performing as Creek. While the name didn’t stick, their creative partnership sparked the beginnings of a working-class power collective that would garner international attention. Soon enough, co-conspirators Hugo Silvani and Charlie Wood joined the ranks, and Pale Waves were scooped up by indie kingpins Dirty Hit in 2018.

Just under half a decade later, on the other side of the Atlantic, the indie-punk quartet are reflecting on their rapid ascension.

“Anytime anything mental happens, you always relate back that you're from northern England and it's very humbling,” Heather leans forward with a smile, her signature blonde hair pinned back and curtained. “Whenever I go back home it really does feel like I'm home. I wouldn't want to come from any other place.” All four artists nod in agreement: a mutual, Mancunian bond that goes further than their whirlwind genesis, it’s an unspoken appreciation of everything they’ve been through. “Northerners will take the clothes off their back if you need something,” Ciara chimes in. “Even the fans are different. Maybe it's biased, but we are superior.”

On paper, the story of Pale Waves sounds like a fever dream: signed as teens, picked up by a trendy label (home to K! cover star beabadoobee, Wolf Alice, Rina Sawayama and more), and breaking into charts with their soft-touch indie-pop debut My Mind Makes Noises. But where success comes, so does the criticism. And Pale Waves’ early association with labelmates The 1975 came at a cost. Frontman Matty Healy’s role as a creative collaborator (and occasional music director) settled heavily on their early rise. Yet despite Matty's contribution, the success of Pale Waves cannot just be attributed to him.

Even after breaking away from those early denunciations, rumours swarmed the band – from bizarre claims that they weren’t actually English to whispers that they were industry plants. “It’s the funniest thing… an industry plant. Oh my god, get over yourself!” Heather exclaims, before Hugo cuts in: “Also, on an independent label!”

“We worked for it. We didn't get put together and given a career like people at the start thought,” Ciara adds. “I think it's to do with the success we got quickly. We are homegrown [and] we did it all ourselves, so for people to think that is kind of cool, but kind of annoying at the same time. We've done something that is obviously successful, but we want to get the credit right at the same time.”

“We've always been very ambitious, and we still are," continues Heather. "We just kind of made it happen. We never wanted to be that band that would play to 10 people in a dive bar – that's just not our vibe. We strive for playing arenas. We're playing an arena today, but we want to headline an arena.”

Pale Waves' all-in ambition is as relentless as it is inspiring. From hitting up tours with alt.pop titan Halsey to landing international appearances on U.S. talk show Seth Meyers, they wanted more than anything to be the biggest band in the world.

And now, armed with third album Unwanted, the Mancunian gang are shedding their old, battle-scarred skin and taking their most eye-catching leap yet.

“[This is] the biggest step that we've ever been through. This album is really strong and it's connecting with a lot of people already, so I hope that it takes us up to the next level,” Heather says enthusiastically. “Hopefully, a song gets picked up on the radio here [in America] and we take off – that would be a dream.”

In Pale Waves’ Reasons To Live music video, the band are positively riotous. Crammed in the backseats of a car, they chug champagne from plastic cups as they scream lyrics into traffic. It’s unscripted, gutsy, and shows you everything you need to know: the band are finding their groove.

Cosying up over Zoom in a nondescript green room is very much par for the course these days – being on the road has been hardwired into the Pale Waves lifestyle. While they’ve found their rhythm now, the group admit that existing almost entirely on buses and backstage didn’t come easy at first. And then, when the pandemic set in, a band that notoriously lived on tour found themselves stalled and faced with a new reality. Once things finally got moving again, Pale Waves then had to readjust.

“When we started playing live again in February, it was quite scary at first. I remember being really nervous,” Hugo admits. “Now, it’s all connected and it started making sense. [We've] gotten more confident and less judgmental of ourselves on and offstage because that comes naturally as you get older.”

For Hugo, the band’s return was momentous for many reasons. Following Pale Waves’ second album Who Am I?, the spotlight zoned in on queer lead Heather Baron-Gracie and non-binary trans masc artist Ciara, who both opened up about their identities. Holding fort in the background, the boys also found themselves piecing together who they wanted to be.

“It's very easy to get caught looking at photos online, judging the way you look and the way everything feels onstage,” Hugo explains. “When you're 19 or 20, everything's heightened. It's the first time you've been in the limelight in your life and you’re having that many people looking at you. It's quite daunting.” The guitarist’s dawning confession is a surprising one: Pale Waves, even in their early days equipped with their oar-shaped guitars, had always pulled off polished, well-rehearsed shows.

After tours were axed and the music industry took a reluctant break, the guitarist found himself navigating a newfound “space away” to mature. “We've been together for years and we never stopped touring. When you're on the road, it's almost like you go backwards because you're having this lifestyle where you're staying up late there's a lot of drink involved. When we came back, it felt like everyone had found their place in the band, but also within themselves as well.

“It definitely took me a while to get over that anxiety of what other people think of us, and of me as an individual. For me, that's been the most freeing thing. When that happened, it makes you wish that that's the way you felt from the start, but it's a part of growing. I feel like that definitely reflects on this new album, and in our live performance as well.”

As the band regrouped and reconsidered their next steps, they wanted to rival (and more importantly improve upon) previous work. After simmering under heated criticism as new age “imitators”, Pale Waves emphatically washed all that away on Unwanted. “It's an album that sounds the most like a band. It feels very raw and is definitely way more real,” Heather enthuses. “Our bond feels even stronger, especially when we're playing it live.”

Though Heather is often at the helm of songwriting, Unwanted is an informed, shared experience by the band. Together, the four-piece whittled down songs and began experimenting with sound. Then, after bouts of scrapping lyrics, shelving tracks and fine-tuning, Pale Waves dropped their first single Lies: “the perfect introduction” to their era of reinvention.

But, really, why did they shake up their sound?

Aside from their die-hard love for Kerrang! (aw, shucks!), time away from the stage emotionally unravelled Pale Waves. After feeling “deprived” of the live scene, they settled on one simple goal: “We wanted to play songs that were really fun to play live.”

From the offset, Pale Waves have been distinctly recognisable. Their unapologetic image – a well-manicured edgy aesthetic – feels reminiscent of the ’00s do-or-die My Chemical Romance looks or, ambitiously, Robert Smith. Today, image is still key. "How you express yourself with clothes is different to how you express yourself musically," Ciara explains. "Look at Robert Smith – he isn't playing death metal, he's playing love songs even though he looks like he's out of a horror movie.”

And visibility has always been important to Pale Waves. From past to present, they present their truest selves – it’s the crux of who they are. The band’s fanbase have loyally mirrored this image, too – particularly as shows have become a “safe environment”. Whether playing a Nottingham dive bar or on tour with 5SOS, they are committed to ushering in a community of self-acceptance. “Meeting the fans and having a real-life moment with them is really important,” Ciara beams. “We've met quite a lot of people after these 5SOS shows to get pictures and make that connection. We definitely do put the work in.”

That authenticity comes to fruition on Unwanted. Packed with ripping drums and crashing guitars, it's a fitting frenetic sound for a band coming out the other side. “It’s a sound made for bigger venues. When we play a new song, people have been going mental,” Hugo smiles. Connecticut will more than suffice today, but they’ve already got bigger future plans for the Manchester Arena.

Talking openly about their next big benchmark, it’s clear Pale Waves don’t take their rising star for granted. Instead, they’ve gotten to grips with who they are – and as Unwanted's anti-coming of age anthem Act My Age suggests (‘Took a good look in the mirror / Better get my shit together now’), Pale Waves “don't give a fuck what people think” anymore.

“People try and put something on and we’ve never done that. We've never been that because we're just very real humans,” Heather explains. “We're surrounded by one another each day. So we try and be genuine all the time. If you try to be someone else you’re just gonna fuck up at some point and everyone is gonna see it.”

“The more genuine you are the more you’ll connect with other people," Ciara continues. "[We’re] shooting confidence into people – especially the younger generation. We’re adults now, so we’re trying to inspire young people to be themselves and don’t get too caught up in people's opinions, because we knew how that felt."

“I still feel it sometimes,” Charlie admits. “There's a lot of really good stories within this album and a lot of lessons, which, as you get older, you learn. It's about giving people confidence, strength, and time as well. [It’s] just allowing them to accept themselves and growing into the person that they want to be, rather than who they think they should be.”

After slugging through their own inner turmoil on Who Am I?, Pale Waves hope to share some answers with Unwanted. “We’re finding ourselves even more," Heather concludes, "and as we become more confident, I hope people find themselves within this record, too.”

Unwanted is due out on August 12 via Dirty Hit. Order yourself a signed copy of the album here.

Get your signed copy of Pale Waves’ new album Unwanted

On top of releasing a new single, Pale Waves have also dropped dates for some exclusive UK in-store performances…