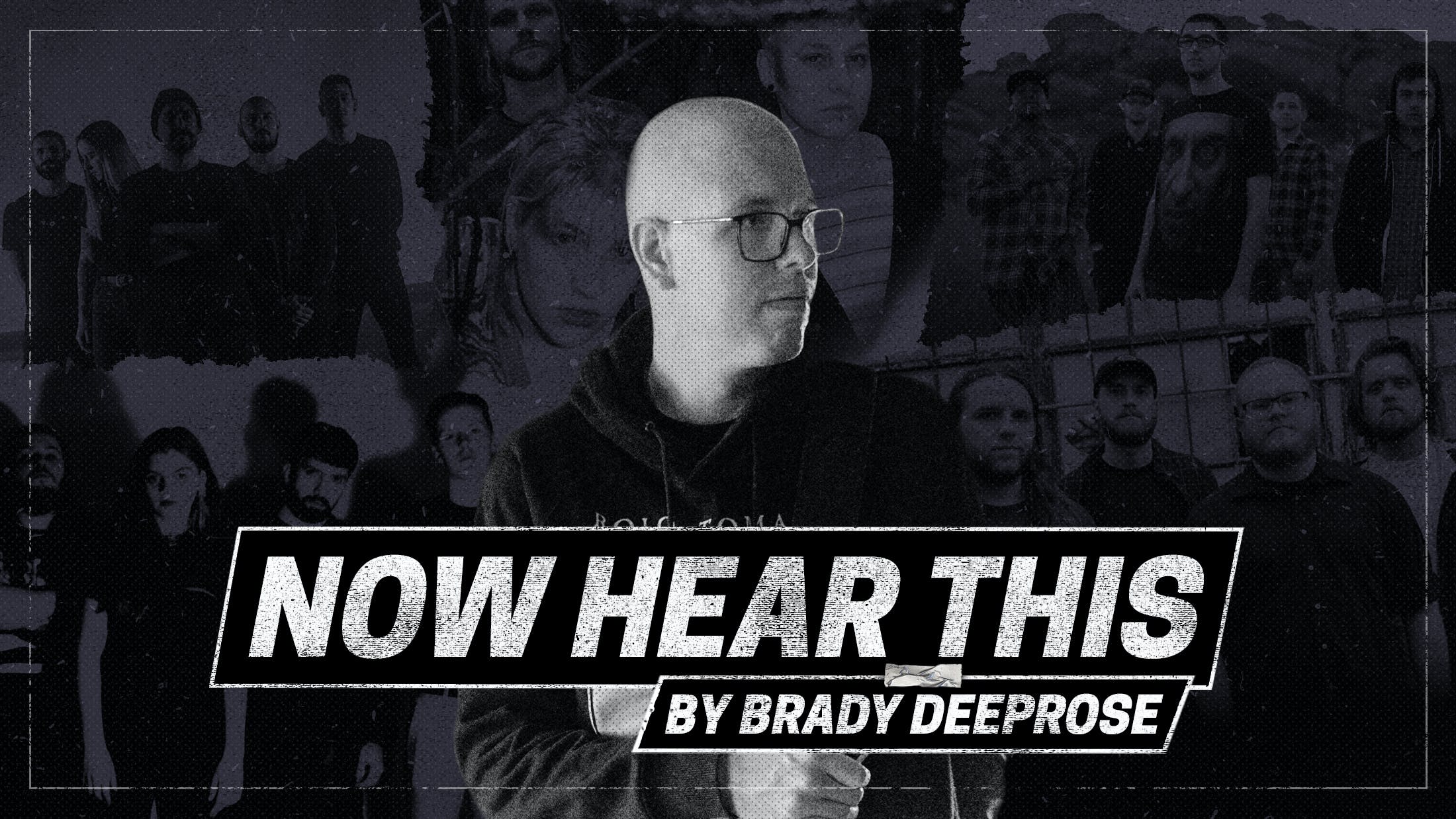 It’s been a crazy few months, hasn’t it? Going from working as team leader in a Toolstation distribution centre to playing the main stage at Download Pilot was one hell of a transition.

Looking back, though, aside from being in and out of the studio writing the new Conjurer album, the last year-and-a-bit of my life has been the first in a long time where I’ve not been totally consumed by being in a band. I met my now-wife while we were on tour in the United States, and to get her a visa over here, I had to hit some financial requirements that working in music management during a global pandemic just wasn’t going to manage. I got this job and went from ground-level operative to team leader over the course of three or four months – I’ve been working a regular nine-to-five (well, two-to-ten). As exciting as the success of the vaccine rollout and live shows coming back is, however, the time away has allowed me to reflect.

I don’t like to use the term 'double-edged sword' but it’s definitely been that. Yes, everything I’ve known over the last seven to 10 years has abruptly ground to a halt. But, on the other hand, I’ve been able to start a family and have a little slice of normality. It was a major realisation to get to see that my life wasn’t going to fall apart the minute I’m not playing in a band. That takes the pressure off a little bit. Over the past decade, I’ve put so much stress on being a musician and knowing that that’s what I want to do with my life. Knowing that, if it all ended tomorrow, I wouldn’t be totally adrift has actually allowed me to enjoy the music more for what it is: my passion.

Simply put, Heriot are a heavy band from the Midlands. I liken them to I Am King-era Code Orange – essentially all of the best, heaviest parts of that band. They were around all the way back in 2016, but they’ve returned with a new line-up and sound, and only have about three songs out in that form. Everything feels incredibly oppressive so far, which is precisely what I look for in a heavy band. The latest single Dispirit is pretty ridiculous.

I would consider myself really good friends with their vocalist and guitarist Debbie Gough. She’s one of those people in music you’ve maybe only really interacted with 10 or 15 times in your life, but who you come to hold really dear. I’m just so stoked to see her in this band, killing it. They’re one of those groups who want to go about things the right way, with no bullshit, putting the music above everything else. I’ve yet to see them live, but I hear that they’re amazing.

Edinburgh’s DVNE are one of those bands that really seemed to come out of nowhere to blindside me with their latest album, Etemen Ænka. I’d heard the name, and seen that very distinctive spelling on tour posters. I don’t think we’ve ever played together, but we move in the same sort of circles. For whatever reason, I’d just not really gone in on them. I’d heard people talking about the album which came out in March on Metal Blade, so I decided to stick it on Spotify one day to see if it was really worth a listen, and I was absolutely stunned from the moment I pressed play.

It ticks all the boxes for what I miss from early Mastodon, with a little bit of ethereal folk stuff chucked in for extra flavour. I can’t pick out just one song because it’s a record that deserves to be sat down with for one long listening. It’s spectacular.

Black Sheep Wall are a sludgy Californian post-hardcore collective I first came across very early in my own musical progression on a 2008 record called I Am God Songs. They came up around the same time as fellow Californians Armed For Apocalypse. But I was absolutely not ready for music that heavy at that point. It was just pure punishment.

I think it was during the Conjurer United States 2019 tour that they popped up in something that I was reading on the internet, and I went back to that record and was just like ‘Holy shit - what is this?!’ I was fortunate enough to be able to get it on vinyl recently, too, and as I’ve been getting more and more into them, I’ve come to realise that that type of music is basically the foundation for Conjurer: that ‘sludgecore’ combination of big riffs, bludgeoning deathcore influence and a little bit of prog that feels more interesting when mixed together than a band doing just one of those things.

They’ve just put out a new album called Songs For The Enamel Queen, too, which is a bit less straightforward than what they used to do, but it’s still incredibly interesting. To see them back making new music again is super exciting. They’re one of those acts who demand a lot of your attention to really get the most out of. But for a band that a lot of people might not already be familiar with, they’ve got such a great back catalogue to dive into, with so many different eras and ideas.

Yashira are another sludgy U.S. band – from Jacksonville, Florida – who’ve just out a new record called Fail To Be. I guess I would describe their sound as like Cult Of Luna having a fight with SUMAC and Helpless in a rubbish dump. They’re a band that I’ve been aware of for a few years, but I’ve gotten more into them after Dylan Mikos, one of their guitarist/vocalists, drove like four or five hours to come and see Conjurer when we were playing in Orlando. We hung out, and we’ve had a bit of a friendship ever since.

They’re a band I really admire. They tragically lost their drummer Seth Howard in a car accident back in 2018, and they’ve dealt with that horrible situation to come out the other side and continue to make music. They’ve shown the sort of resilience that I don’t know I’d have in me if I were in the same position. Not only are they brutally heavy and interesting, but they set such a strong example as musicians, with real passion for what they do, that they deserve listeners’ attention.

CLT DRP is another name I’d seen around a bunch, but I didn’t really stop to check them out until quite recently. They just put out a record called Without The Eyes, which has simultaneously cleared up questions on how to pronounce their band name, and any notions that UK punk rock is dead. It’s so full-on and vibrant, full of interesting ideas and attitude in a way that other bands would struggle to replicate. They’re incredibly aggressive, honest, interesting and heavy.

Truly, a lot of my listening isn’t actually traditionally heavy Conjurer-style music. The electro-punk of CLT DRP might stick out a little bit at the end of this list, but it’s more representative of the weird, alternative shit I listen to a lot of the time. It’s more interesting that way. The charisma that comes through from vocalist Annie Dorret, and the ingenuity of guitarist Scott Reynolds and drummer Daphne Koskeridou, is just so intriguing to me. Their single Where The Boys Are is a good place for new listeners to start.

Conjurer's album Mire is out now.

‘Greatest hits’ selection of bands from 2022 announced for ArcTanGent 2023

The first few bands for next year’s ArcTanGent have been unveiled – and it’s a ‘greatest hits’ selection from 2022 including Conjurer, Scalping and DVNE.

Conjurer: “Already, this band has come further than any of us thought was possible…”

No-one was more startled than Conjurer themselves by their dizzying ascent onto metal’s world stage. Yet, having taken stock over lockdown, and come to terms with the departure of drummer Jan Krause, the Midlands mob have returned with staggering second album Páthos to reaffirm their reputation as one of the UK’s most uncompromisingly brilliant bands...

Watch the video for Conjurer’s new single Cracks In The Pyre – which Brady Deeprose explains is “probably the biggest departure from our previously established sound”.

Conjurer talk new album Páthos: “I don’t want to be the sort of band where people can anticipate what’s going to happen”

It’s been a long ol’ wait, but finally Conjurer are ready to unveil record number two. Here, singer / guitarist Brady Deeprose reveals why Páthos is “objectively the best album anyone’s ever made…”