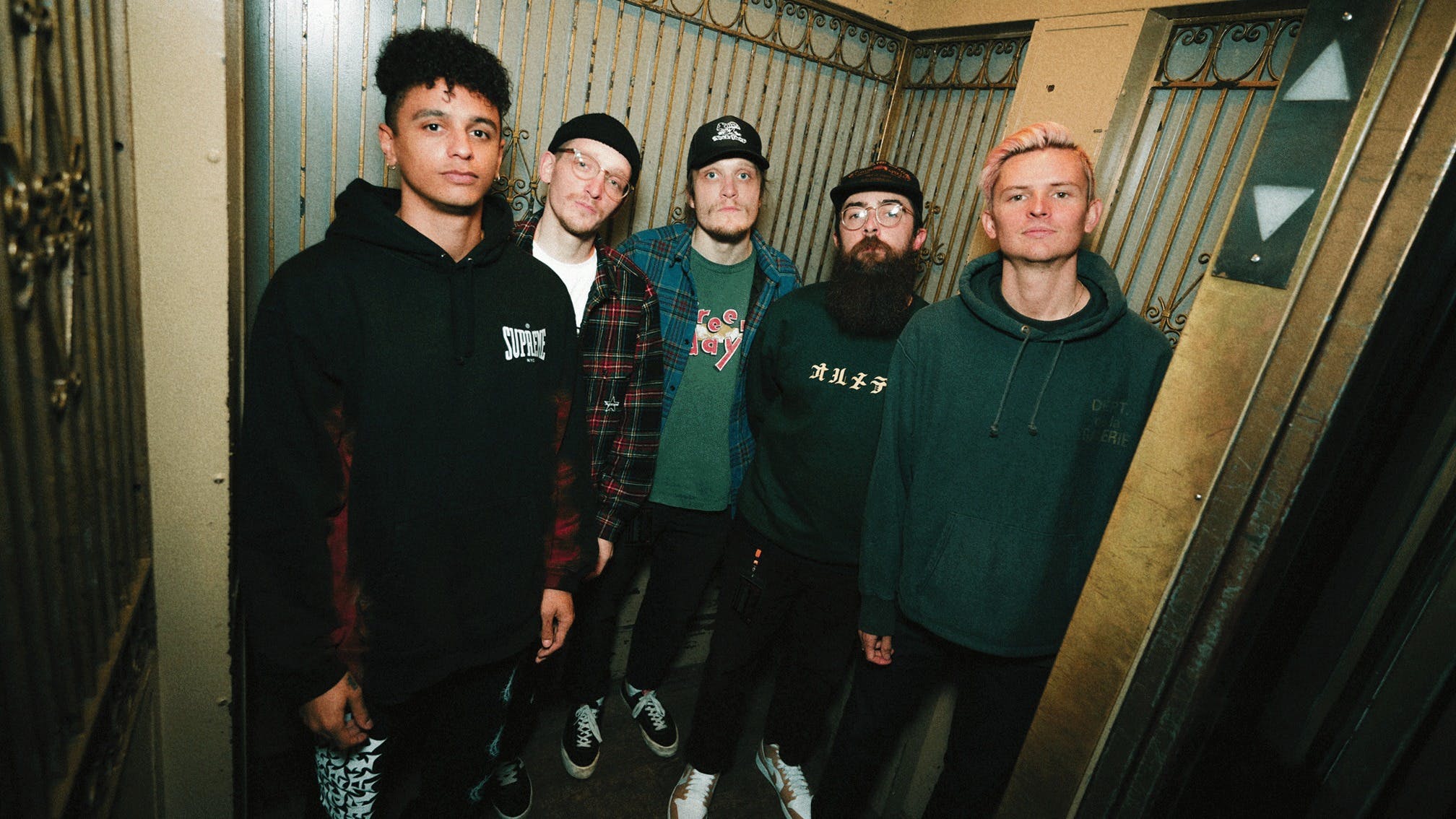 It’s almost as if whoever was filming knew it was something special. Neck Deep had only formed the previous year, and here they were, in mid-April 2013, in a garage in Deltona, Florida, playing their first-ever shows in the States to 200 or so sweaty, excited bodies. The whole thing was captured in its entirety on film, and even now, watching it on YouTube, the magic remains.

It’s the kind of moment, in fact, that people who weren’t there for will say they were, that they’re in that crowd, singing frontman Ben Barlow’s words back at him as if their lives depended on it. Not bad, considering the Wrexham-based band were technically there for a holiday.

“We flew over on a £250 return flight and sorted out shows two days before we went,” recalls Ben today, speaking from San Francisco, where Neck Deep have just played a date on their first post-pandemic U.S. tour. “We just rocked up with suitcases full of shitty merch. We had to borrow all of our equipment and just ripped. That first show was just in a guy’s garage, but it was so sick. They said that was the most people that had ever turned up to a show there. It was just absolutely rammed. The decision to just do that – to say, ‘Fuck it, let’s go’ – is one of the most important moments in the band’s history.”

“We played Florida the other night, actually,” adds guitarist Matt West, known simply to everyone as West, “and that put it into perspective for us as to how far we’ve come. We’ve gone from playing our friend Mikey’s garage in Deltona, Florida to playing in front of over 2,000 people. We were just stood there thinking, ‘This is fucking crazy.’”

He’s right. But it’s also been incredibly natural. Off the back of that show – well, that video of that show – Neck Deep soon signed to Hopeless Records and started their journey to the dizzying heights they’ve reached today. Since releasing their 2014 debut album Wishful Thinking, they’ve steadily grown in stature to become one of the UK’s biggest rock acts. Their last two LPs – 2017’s The Peace And The Panic and 2020’s All Distortions Are Intentional – both went Top Five in the UK charts. The band were meant to headline London’s Alexandra Palace (capacity: 10,400) back in September 2020.

Of course, the pandemic put paid to those plans. Now, the band have taken a slightly more pragmatic approach and will headline London’s O2 Academy Brixton on February 23, 2022. It’s smaller venue than Ally Pally, but still holds a whopping 5,000 people.

“Fucking hell, it’s still ginormous!” laughs West. “But with everything going on, and having rescheduled the tour three times already, we figured we’ll just do Brixton this time around. Ally Pally is definitely something we want to do in the future for sure, but with the unpredictability of stuff at the minute, it was just wiser to be more sensible about it.”

He pauses, then chuckles.

“Don’t release an album in the middle of the pandemic. That’s my one fucking hint I’d give anyone.”

That’s a sentiment Ben echoes, though he’s not quite so blunt. Instead, he looks at the situation that Neck Deep, and so many other bands, found themselves in as another learning curve on the path that the quintet – these days completed by original drummer Dani Washington, guitarist Sam Bowden and new bassist Seb Barlow – have forged for themselves, and on their own terms, over the past near-decade.

“We’re just proud of where we’ve come from and how we’ve got here,” the singer says. “We’ve never rested on our laurels and taken it easy. The dream has always been to be the biggest and best band that we can – we kind of looked at blink-182 and Green Day growing up and said, ‘We want to be that – we want to be this generation’s blink-182.’ We’ve still got a lot more to do, but we’ve got to where we are by kind of just being ourselves and doing what we do, and we don’t want to divert from that.”

Those lofty ambitions have been getting ever closer. In the summer of 2019, the band were offered a support slot on blink-182’s U.S. tour with Lil Wayne, which stopped at 42 arenas across the country (with one date in Canada). While the band have had their fair share of eye-opening, profile-raising experiences across the pond – including three full runs on the now-defunct Warped Tour in 2014, 2015 and 2017 – nothing quite compares to getting to open for their heroes across the Atlantic.

“It was ridiculous,” recalls West. “Ben and I were sat in a shop in town, and he’s like, ‘Have you read this fucking email that’s just come through?’ and I was like, ‘Oh no. What’s happened?’” And he’s like, ‘We’ve got an offer to tour with blink-182 and Lil Wayne, and it starts in three weeks.’ We didn’t think it was real. We were meant to have the summer off to write, but there was no way we could turn it down. It was a once-in-a-lifetime opportunity and a huge, huge honour.”

“We actually took it really easy on that tour,” adds Ben. “We only played half an hour every day. And for a band that’s usually playing hour-and-a-half-long sets, playing half an hour every day is just easy! The fact that we got to be on tour with our favourite band, play half an hour and have no other responsibilities, it was definitely one that we’ll always remember as just being really fun.”

Neither Ben nor West are particularly forthcoming when it comes to crazy stories from either that tour or any of their Warped experiences – partly because their main focus is just putting on the best show they possibly can – but the guitarist does recall one moment early on where they almost found themselves in a bit of a pickle.

“We kept ourselves to ourselves on that tour and stayed out of the way,” West says “because we didn’t want to piss anyone off. So we played our 30 minutes and then went back to the bus, and that was pretty much the whole thing. But we did get in trouble the first week, because we got one of those stupid electric scooters. We were just whizzing around backstage on it, and blink’s security told us to put them away and confiscated them. But later we asked Mark Hoppus if he minded us riding round on scooters and he was like, ‘I don’t give a fuck, do whatever you want!’ And we were like, ‘Right! We’ve got dad’s permission now!’”

A couple of years later, and Neck Deep are now on their own U.S. headlining tour. The venues aren’t arenas – not yet, anyway – but just as they worked their way up from playing small pubs in Wrexham to that Ally Pally show-that-never-was-but-will-at-some-point-be, they’re doing the same in America. And just as those who came before helped them out, so Neck Deep are paying it forward too, bringing out Boston Manor for the lengthy run, as well as U.S. acts they love like Oxymorrons and Heart Attack Man. In other words, their pop-punk dreams have essentially come true on both sides of the Atlantic.

“It’s all a shock even now still,” admits West. “I think being where we’re from has kept us grounded, and also the fact that we put in a lot of work before we were even in Neck Deep just makes us very appreciative. It’s mad that we get to do this for a living, and it’s so good to actually be back doing it.”

And that’s the crux of the matter. They’ve grafted so hard on the road since the beginning, from that sweaty, house show in a friend’s garage in Deltona to this tour now. It’s what they live for, and it’s what they’re good at. It’s why they first played Slam Dunk after being voted onto the bill by fans, why they’re pop-punk icons, why they’re unusually successful in America for a British band, and why they were able to break out of Wrexham to take on the world. And, really, it all goes back to that first show in America.

“When people saw a British band going over to America and just swinging for the fences and having no fear, and this supreme confidence that we’re just going to fucking do this our own way, I think that was huge,” says Ben. “I think everyone raised their eyebrows when they saw that and were like, ‘Oh shit!’ And in that respect, I don’t think we’ve changed in terms of the passion and love for what we do.

“At the core, I still just want to enjoy what I’m doing and see the world and play as many shows to as many of our fans as possible. From day one we wanted to be as genuine as possible and as true to ourselves as possible, and hopefully give people something they didn’t know they needed. And that’s never changed.”

This article was originally printed in December’s one-off live music special. It has been updated to reflect the fact that Neck Deep had to reschedule their UK tour dates.