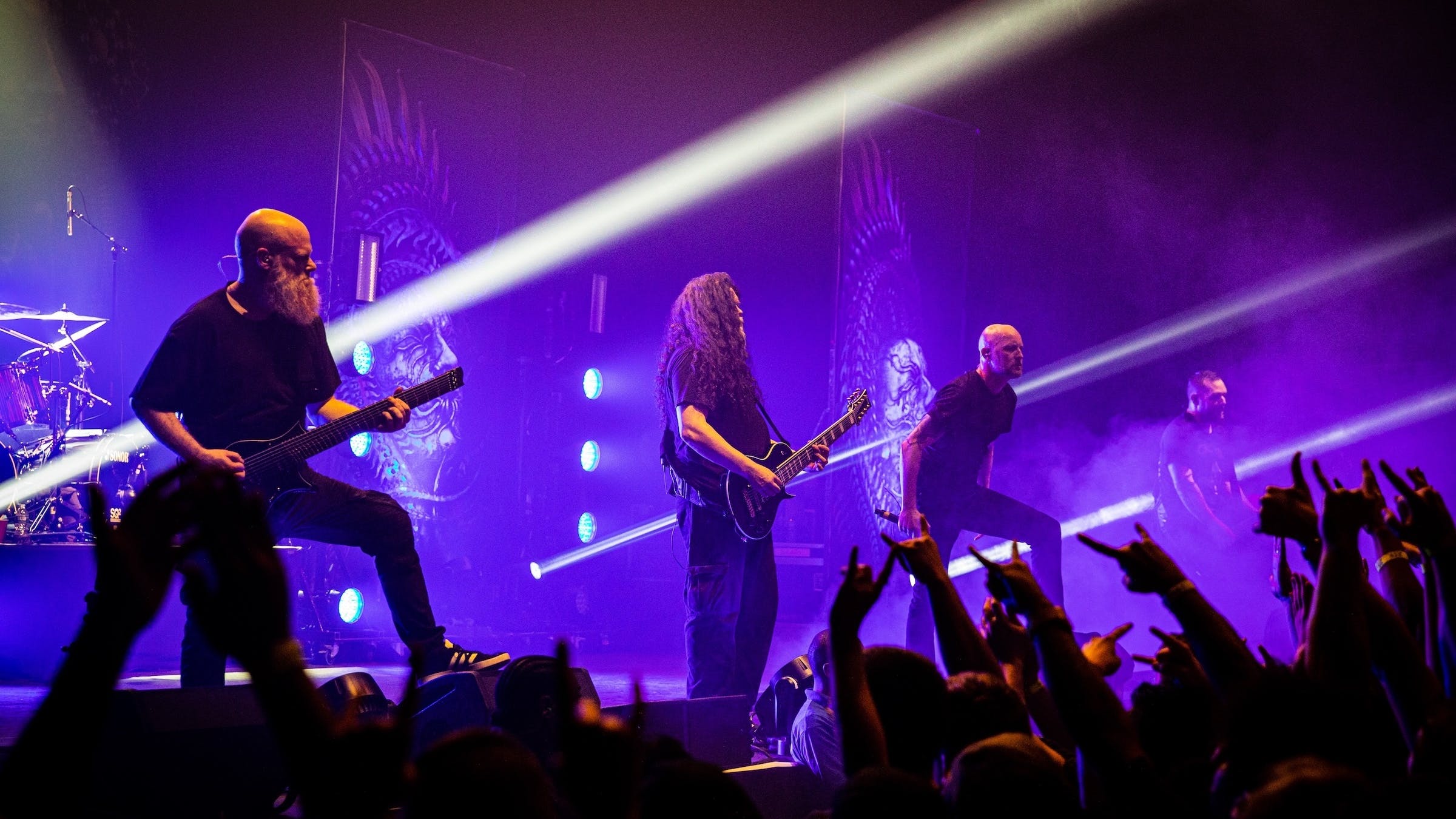 Gearing up for what is sure to be one crazy-ass metal show, the staff at New York’s Hammerstein Ballroom at the Manhattan Center aren't sure what to expect. Audience members pass through metal detectors more than once, are frisked, and warned that there is no re-entry. The crowd, in turn, is a little bewildered by the thorough precautions -- most of them being the type of T-shirt- and tank top-clad every-dudes who don't actually pose any threat. But this is, perhaps, a testament to the intensity of the bands playing at such an historic, elegant venue: Meshuggah and The Black Dahlia Murder are huge by metal standards, but most definitely extreme acts, about to perform their extreme music in a massive space that's usually only played in small clubs. The venue is ready for anything, and the fans in tow are willing to deal with whatever it takes to see these guys play live.

The Black Dahlia Murder open the night with some much-needed melodic death metal, satisfying the itch for awesome macabre extremity before the barrage of non-Euclidian mathcore begins. The Detroit quintet look at home on the spacious stage, a testament to the near-constant touring and festival circuits they have under their belts these days. Frontman Trevor Strnad lopes excitedly from one side of the stage to the other, pumping his fists or conducting the band’s riffs with hilarious flicks of his hands. The band rip through a mix of fan favorites like Miasma and What A Horrible Night To Have A Curse and new classics like Jars and the title track from 2017's Nightbringers. The crowd eats it up, rallying excitedly around the slowly-tightening circle pit that dominates the center of the standing-room floor.

By the time Meshuggah takes the stage, the venue is a total crush of bodies; the packed crowd warms up with rousing singlongs of Wham! and Foreigner tracks that lead up to the set. When the lights go down and the band kicks into Pravus, the entire place goes berserk. Meshuggah’s stage show is somehow both stripped down and elaborate, providing viewers in the balcony a spectacle of carefully-timed spotlights while the band stand in terrifying silhouette at the front of the stage, grinding out their patented hard-to-headbang-to extreme progressive metal.

The stage show, mixed with the jarring kinetic powers of tracks like Rational Gaze and Future Breed Machine, makes the entire experience feel like a pod of unfriendly aliens making a rare visitation to a planet filled savage, simple-minded beings who hail them gods. The floor reflects this idea with its nonstop roiling pandemonium; the entire standing area becomes a sea of roiling bodies that never stops crashing into one another until the band are done. It is a jaw-dropping show to behold, and an incredible statement on Meshuggah’s place in the world of modern rock, where a confusing Swedish death metal band can give draw a totally earnest New York City crowd to a concert experience is both intellectually stimulating and viciously brutal.

After playing two encore tracks, Meshuggah leave as quickly as they started. The fans pile out in midtown Manhattan, drenched in sweat and chuckling with the sweeping relief of one who has just endured a much-needed beating. Both venue and audience still seem slightly confused by what's occurred here tonight, but at least now there is an understanding of why they all gathered here, and a knowledge that it was totally worth it.

The third Bloodstock headliners have been revealed… joining Killswitch Engage and Megadeth are the mighty Meshuggah!

12 bands who succeeded by never selling out

Here are 12 bands who conquered the world by refusing to sacrifice what they believe in.

Updated: A round-up of all tours and events affected by coronavirus in 2021

Stay up-to-date on all cancelled and rescheduled tours, festivals and events this year.

The 13 essential progressive metal albums you need to know

From Opeth to Mastodon to Tool, these are the progressive metal albums that everyone needs in their record collection…

Tech-metal titans Meshuggah will be joined by Zeal & Ardor for an epic 2021 tour in the UK and Europe.