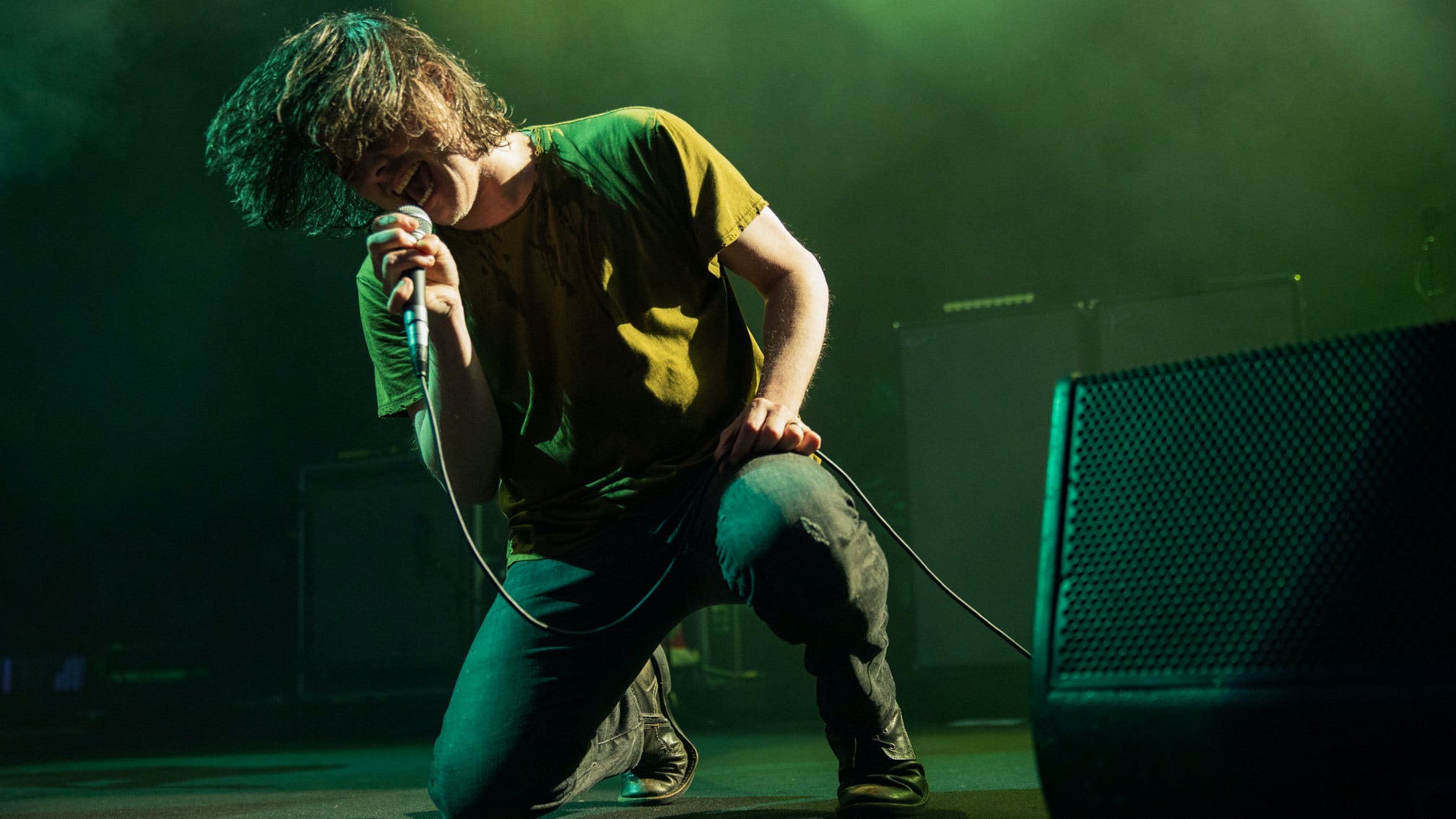 “How have the last two-and-a-half years been for you guys?” asks Gerard Way, half-sarcastically, a couple of songs into My Chemical Romance’s huge comeback show at Cornwall’s spectacular Eden Project. “Well, we’re here! And we’re very, very happy to be here with you tonight. Let’s play some fuckin’ rock music…”

The frontman doesn’t spend too much time chatting onstage tonight, instead letting the momentous occasion (and, more importantly, the music) do the talking. But when he does – whether it’s about staying hydrated, needing a hairbrush or light-heartedly admitting his final note in Famous Last Words sounded “like shit” – the 6,500-strong crowd hang off his every word, perhaps hoping the frontman will lift the lid on what else the reunited emo heroes have planned now they’re an active band again. But no, this is all about tonight – their first UK show in a decade – and reconnecting with a fanbase who have been missing them every single day since their hiatus.

Up first, though, Frank Turner has the task of getting things started. Now over 2,600 gigs into his career, the singer-songwriter knows exactly how to work the hyped-up crowd, not remotely letting it faze him that he’s standing in the way of one of the biggest comeback shows in rock. “Find a dance partner and show me your best moves!” he encourages during opener Four Simple Words as the crowd happily oblige, before getting their voices going properly during brilliant sing-alongs to the likes of Recovery and I Still Believe. It’s 10 songs of punk rock entertainment, and more than gets the party started before the main event.

Then comes the wait. For 10 minutes past their 9pm stage time, My Chemical Romance spectacularly yet simply build the tension with a wall of noise blasting out over the speakers – rather than any more colourful, dramatic fanfare for previous tours like Danger Days and The Black Parade. They boldly launch straight into recent surprise single The Foundations Of Decay, with fans already belting along to every lyric of the six-minute epic. Guitarist Frank Iero, meanwhile, bolsters the song’s breakdowns with some killer screaming; it’s a genuinely monstrous beast live. It’s also a great indication of just where My Chem plan to go tonight: rather than a straightforward setlist, they pull from all corners of their career from the present day right back to the very beginning.

The first big single of the night arrives just two song in, as they treat the crowd to Three Cheers For Sweet Revenge’s iconic opener Helena, before tearing through Make Room!!!!, Summertime, and The Black Parade favourite This Is How I Disappear for the first time live since 2010. Following a fantastically sassy You Know What They Do To Guys Like Us In Prison, MCR drop a huge one-two of Na Na Na (Na Na Na Na Na Na Na Na Na) and Famous Last Words, with the Eden Project’s fabulous surrounding biomes lighting up the misty sky above.

“We’ve never played this song live before,” teases Gerard before Surrender The Night from the band’s Conventional Weapons compilation album, and it’s one of a few live debuts tonight (including Foundations…, and a brilliantly rowdy Boy Division for the encore). 2002’s Our Lady Of Sorrows follows and sounds brain-meltingly heavy, before the frontman introduces his bandmates via the punky thrill of Vampire Money.

Naturally, several big-hitters are saved for towards the end of the set, with a glorious Welcome To The Black Parade sending the crowd wilder than ever, and a colossal Sleep giving Ray Toro the chance to bounce around the stage and shred his heart out to a goosebump-inducing extended outro.

Check out the full setlist from the first night of My Chemical Romance's tour below:

Here’s who will be supporting My Chemical Romance when they finally make their way across the pond for their comeback tour this summer.

Frank Turner goes back to hardcore and a whole lot more on superb ninth album, FTHC.

Frank Turner: “For the longest time I was the guy that toured, and that was it. I needed to become something more…”

Wondering where to turn next during a “weird, middle-period” of his career, Frank Turner had to dig deep to find out who he really was going into brilliant ninth album FTHC. Now, he’s never been so certain.

“It’s where the next generation of your favourite bands will come from”: Why it’s more important than ever to support independent venues

The effect COVID has had on grassroots music venues has been devastating. It’s only through fundraising and support from fans that many have managed to stay open in the face of bankruptcy. As doors reopen, we look at why it’s absolutely vital for the scene to continue to step up…

Frank Turner pays tribute to Scott Hutchison with beautiful new single, A Wave Across A Bay