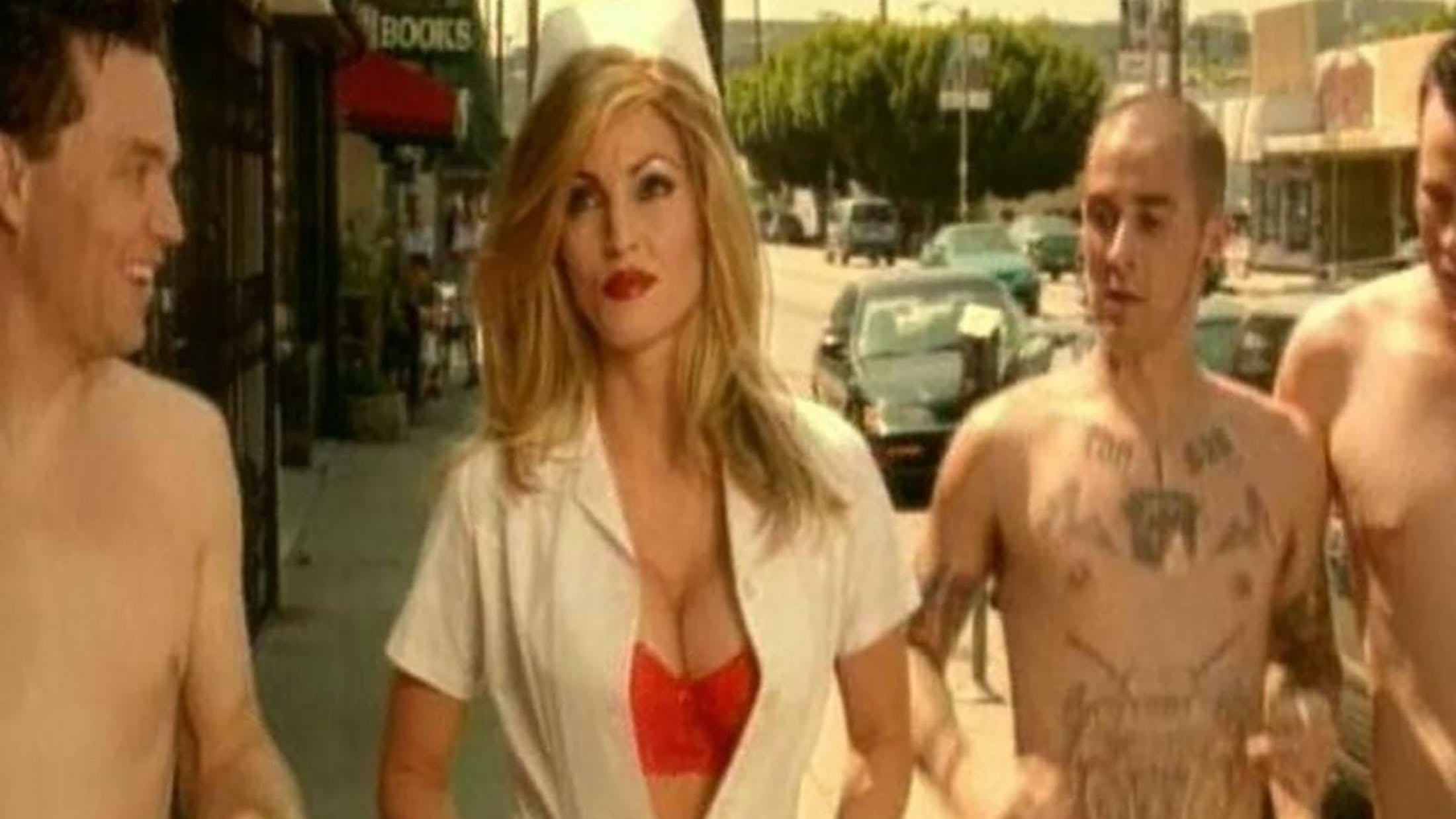 Incredible to think that blink-182 have been famous for 20 years now. Twenty years! There have been a few hiccups along the way, of course – side projects that caused rifts, the occasional indefinite hiatus, Tom DeLonge’s departure – but they’ve somehow managed to still be a thing – still massive, still great, still hilarious.

In 1999 though, all of that was yet to come, and Mark Hoppus, Tom DeLonge and Travis Barker were three fresh-faced, pert-buttocked youngsters. Dude Ranch had done very well, particularly Dammit, and new recruit Barker was absurdly good, but little did they know, they were about to go stratospheric.

What’s My Age Again? was the first single from Enema Of The State, an album that went on to sell a staggering 15 million copies and still tops lists of the best pop-punk albums ever. While second single All The Small Things was an even bigger hit, this video was in a lot of ways career-defining, earning the band a reputation as perpetually-nude pranksters that they were sometimes uneasy with. The song – initially titled Peter Pan Syndrome until people at the label objected, saying it was too obscure a reference – is at once a celebration and lament at wilful immaturity inspired by Hoppus’s own life.

Look, though, we’re all here for the naked dudes. So let’s go for it.

0.01
Here they are, the gents themselves, as naked as jaybirds, running through the streets of Los Angeles. The full extent of the nudity is slowly revealed over 14 or so seconds, which is oddly restrained.

0.16
The line is, of course, 'I wore cologne to get the feeling right', not 'I walk alone', something Hoppus feels compelled to occasionally point out.

0.19
St Regis liquor store is still there, as shown on Google Streetview.

0.23
The chap in the banana suit shows up again the the All The Small Things video. Fans occasionally show up at gigs dressed as everyone’s favourite potassium-filled snack.

0.26
They’re a good-looking band, blink-182, but hell’s bells, look how handsome Mark Hoppus looks here. Have they given him tinted contact lenses or something? Whatever’s going on, good work. How good they all ended up looking was one of the things that the band became uncomfortable about, though, with DeLonge saying in 2014: “We were so naïve that we would run around naked, but they’d make it all glossy and put it on posters and make it look like we really were some kind of erotic boy band or some shit. We were coming from the punk scene, but the label fashioned a whole thing around us that we didn’t even understand; we were just kinda caught up in it. So it took us a little bit to dig out of that and come back to who we really were. And it’s hard to do that once people spend millions of dollars making you into something visually that we weren’t.”

0.35
As fun as the streaking looks, it got old for the band, with DeLonge recalling: “You know, when we were filming the video for What's My Age Again?, the whole naked thing was only funny for like 10 minutes. Then, I was the guy standing naked on the side of the street Los Angeles with cars driving by me giving me the finger and shit. It’s funny watching the video now, but at the time, it stopped being funny 10 minutes in, and it definitely wasn’t funny three days into it”.

0.49
There’s being naked, and there’s jumping naked. The band had flesh-coloured Speedos on during filming, but nudity was still not unknown – album producer Jerry Finn later recalled to Entertainment Weekly: “I saw them naked more than I ever care to see anyone naked. In the mastering studio — pretty much anywhere.''

1.03
There’s a lovely bit of business going on with the hosepipe here – the lady watering her plants looks at the naked men, and in doing so turns around and drenches the three ladies on the bench. That’s a proper old-school, silent-movie kind of gag, if not for the penises and stuff.

1.08
In live versions, as heard on The Mark, Tom & Travis Show: The Enema Strikes Back!, Hoppus occasionally subs in the line “Where’s my Asian friend?”

1.19
blink have remade this video twice: their occasional shorter collaborators “Mini-blink” recreated several scenes from it for the Man Overboard video in 2000, and Vine stars Lele Pons, Hannah Stocking and Vale Genta did a gender-swapped version for the 2016 video for She’s Out Of Her Mind. Lindemulder reprised her role for the former, while Workaholics star Adam DeVine played the nurse in the latter.

1.31
This is a visually fun shot, with the inverted band seen through a magnifying glass, which seems as good a time as any to big-up director Marcos Siega. Siega worked with blink a few more times, including the All The Small Things video. He also did Papa Roach’s Last Resort, System Of A Down’s Chop Suey and Alien Ant Farm’s Movies – all massive bangers with killer videos.

1.44
It’s a strange thing to say about someone with clearly quite a lot of tattoos, but look how few tattoos Travis Barker has!

1.46
The biggest advertising campaign of the time was the Gap “Khaki Jive” campaign, which featured groups of people swing-dancing in comfortable slacks, and started a mild swing revival.

1.52
Even in Speedos, respect for somersaulting. That’s a brave action. Hoppus was very aware of the silliness he could get away with by being in a band, telling Billboard in 1999: “We get to do whatever we want, which is pretty much allowed because we play music for a living. If I was a banker, there would be no way that I could run around farting, licking girls or just taking off for fishing trips on a whim. We can’t do blink forever, I realise, but for now we try not to set goals or think about the day when it won’t be acceptable for us to act like horny losers. What’s My Age Again? is about being in my 20s and acting like a jackass teenager. It is absolutely autobiographical. I till make prank phone calls, insult people and put my foot in my mouth. I drink too much. I can even eat a half-dozen doughnuts in one sitting. It makes me endearing, especially being in a band, but I’m the biggest letdown.”

1.58
This is the show Talk Soup, hosted by John Henson, a show that would slowly morph into various forms, spinning off into The Soup, which eventually became the now-cancelled Netflix show The Joel McHale Show With Joel McHale.

2.02
KTLA-5 is a local Los Angeles TV station. The anchors are playing themselves.

2.04
The Last Word was a TV sports discussion segment hosted by Jim Rome, who also made cameos in Space Jam and The Longest Yard.

2.18
Look, actual arses! You can also see Mark performing naked in this performance from 2000 or so...

There you have it, two and a half minutes from 20 years ago that remains a massive laugh. Let’s all go to LA and recreate it! We’re going to need quite a lot of sun cream.